Maybe we should plan to do this trip together someday? Especially since we are both in Visalia.

Yes! I was thinking this summer we should get some hike in. Sequoias is keeping me way busy (in town, not where the namesake is) so hopefully in July!

"The mountains are calling, but can't find my phone"

I posted this trip in a few places and received a few PM comments and questions, so to be most economical and informative I will relate here my thoughts and answer those questions about the trip and my recommendations.

My original plan was to enter Pants Pass, then go south over either Lawson Pass or Picket Guard Pass, climb Picket-Guard for a better view looking west, spend time at the last most eastern Picket Lake, go up Kaweah Basin and over Pyra-Col Pass, bag Eagle Scout Peak, and then return on the HST. Up to the last minute I was considering doing the same except to switch it up and go counter-clockwise. I still think that this works well as a loop trip.

I instead went over Pants Pass, then Picket Guard Pass, walked up the Kaweah Basin, then returned and ended my trip to the Basin by exiting east from the last Picket Lake to the Kern River and then returning by going the long way around on the HST. Yes, this exit was easy, and it should be clear enough from the map I published. I took the Picket Pass instead of Lawson Pass because of lingering snow, and it appears that both Lawson and Pyra-Col will be more likely to have late-season snow later into the summer, so this is something the June hikers should consider.

An alternative exit suggested to me is to exit going east from the last Picket Lake along its drainage creek all the way to Rockslide Lake. This suggestion apparently involves Class 3, whereas the route I took was almost all Class 2. An alternative entrance suggested is to come in the from the west, summit Lawson Peak, go down the ridge in the east direction, and then drop over Lawson into the Picket Basin.

I did not care much for much the basin to the south of the Kern-Kaweah River; this is the one you drop into from Pants Pass. The middle Basin, with Picket Creek, looked OK, but I did not walk up it and cannot offer an informed opinion. I can however emphatically insist that the most important destination should be the lower Kaweah Basin. Yes, that last Picket Lake is very nice, but it is the lower Basin that is exceptional.

If someone intends to just walk through east-west (or versa), like on a version of a modified HST trip, I recommend Pyra-Queen pass, (although I have not taken it), walk through the Kaweah Basin, and go out one of the alternate ways just mentioned. Hopes this helps.
Top

Thank for posting the link to your trip report, and website. I've already gotten part way through your SHR trip report.

Your photography is beautiful. If you don't mind me asking, what kind of camera were you using?

That avalanche at the junction of the Colby Pass trail and Kern River was intense last summer. I made it about half way in late July but turned back, it was a mess of tangled trees and debris. Your photo captures the devastation much better than anything I took. I took this from inside the debris field, in the Kern Rive, at my turn-around point: 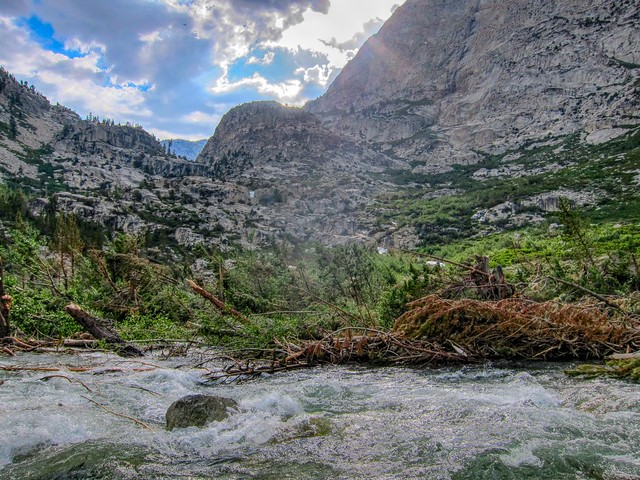 @bluewater
I use an iPhone 6. With good light it is very capable and one just accepts and works with the limitations of focal length, aperture and latitude. I tend to shoot a bit hot, and only slightly post-process with a small bump in saturation and sharpness, depending on the subject. Except in low-light, the color is almost always spot-on. I dislike the new iPhone X screen with the curved image corners, and its price, and so I am waiting for the inevitable repackage of the iPhone 8 when they upgrade the camera with iPhone X camera technology so I can gain RAW and a faster lens.

I attach another pic of the debris at Colby-Kern. I can only imagine how much more intense the water must have been in July than when I went in September. I managed to get through the summer without one dangerous crossing, but man the water was really flowing everywhere.
IMG_1669.JPG
You must be registered and logged in to view the files/photos attached to this post.
Top

Wow, the color and clarity in the full size photos on your website don't look like typical iPhone pictures. Maybe I'll try using one this year (I also have a 6).

Thanks for posting your detailed photo of the debris field at the Colby-Kern. It really shows the incredible destructive force that decimated that area. After climbing through the partially submerged trees (in the rain) I remember realizing it was just not safe to continue, a common theme last summer.
Top

I was wondering about the cause of the downed trees and theorizing that it was caused not by avalanche but rather by the sheer weight of the heavy snowpack. Further up the trail, at Rockslide Lake, there were many downed Cottonwood trees that made passage through that section very slow. Do your think that explanation is plausible?

The photos above show avalanche debris. Plus, if you look hard, you will see lots of trees that are snapped off in the middle. That is typical of avalanche debris. Then, when you get to that spot out in the field, you look up the fall line to see where the debris came from.
Top

This is just a teaser....the pics in the full report are the ducks nuts !

How did I miss this trip report? Well, I'm glad I finally found it.
The report and photos at https://www.trailnamebackstroke.com/kaweah-basin/ are even more incredible.
Thanks, Cameron, for taking this trip and sharing it with us. It was like being there with you.
www.sierrahiker.com
Top
Post Reply
19 posts