If you've been searching for the best source of information and stimulating discussion related to Spring/Summer/Fall backpacking, hiking and camping in the Sierra Nevada...look no further!
Post Reply
7 posts • Page 1 of 1

This past weekend I hiked to Big McGee Lake, and beyond. I posted photos and snow conditions here.

Snow Conditions: Overall, it's a low snow year, and it's melting fast. I hiked to 10,000' without encountering significant snow, and I was fine in trail running shoes up to that point. The meadow (at 10,280') NE of Big McGee Lake was totally snow-covered with drifts up to 3 feet deep. The snow was rotten after the recent warm rains, and my snowshoes were essential. Some of the drifts are solid and condensed, but many snow patches have rotted from the underside, making them unstable for walking. Even with snowshoes, I frequently plunged through rotten snow into air pockets. It was very frustrating! Big McGee Lake was covered in ice. Above 10,500', the snow quality was better: generally more compact and less rotten. Snow travel was easier above the lake.

Story:
On Saturday afternoon, I hiked from the McGee trailhead to snowline. I camped in the forest on the SW shore of the unnamed lake at 9,970'. Along the way, I passed approximately ten day hikers who had attempted to reach Big McGee Lake earlier in the day, but stopped short due to snow. Later that evening, it started snowing and hailing. I enjoyed the storm from inside my tent. I cooked hot soup in my tent vestibule and savored that quiet serenity that comes with snow falling in the forest.

On Sunday, I strapped on snowshoes and continued to Big McGee Lake. The weather forecast predicted it would be clear today, and I was prepared---and hoping---to climb Red Slate Mountain. Indeed, there were patches of blue sky in the morning, and I felt optimistic that the storm clouds would burn away. Unfortunately, the blue sky disappeared and another snowstorm arrived by noon. I was traveling solo, so I thought it was wise to turn around. I enjoyed an early lunch on the slopes overlooking Big McGee Lake. I was feeling a bit sad about not climbing Red Slate, but I think it was the best decision, especially as the temperature dropped, the clouds grew darker, and then snow fell.

My hike out was lovely. The storm added much drama to the scenery. McGee Canyon is stunning any time of the year, even with bad weather.

On my hike out, I met a boy scout troop near the beaver ponds at 9,000'. They asked me about snow conditions, and they said they planned to camp at Big McGee Lake. They didn't have snowshoes or snow-camping equipment. I suggested they stop short of the lake and instead find a dry camp. I hope they took my suggestion. One of the adult leaders said, "well, we have lots of layers, we'll be fine."
You must be registered and logged in to view the files/photos attached to this post.
Last edited by Flamingo on Tue Apr 16, 2019 2:47 pm, edited 6 times in total.

Sweet report. I've never been up that way, but it's good to have an idea of the conditions. As I spend more time hiking, I realize more and more that I really dislike hiking on snow. I just don't like the added difficulty. Looks pretty up there.
Top

Man, there is a whole lot of snow not there.
Top

Nice to see some TRs rolling in, thanks. I'm due to a solo trip.
Top

I'm headed up to McGee Pass to Cascade Valley June 30 to July 3rd. Do you think there will be issues crossing any streams?
Top

Flamingo, I must have missed your original posting because I was up @ Piute on 5/31. I had intended to do a short section hike, but turned back in Humphreys due to poor snow conditions. A lot of hikers - including early PCTers - seem to have been complaining about postholing, which are the conditions I faced. My guess is the late snow this year didn't have time to properly consolidate, which led to weak, rotten snow that was unstable even by 7am.

At one point, I was having difficulty even traversing between the various rock ribs. I'd start to cross between some islands and sink to my waist. A few hours of that, without enough rock bands to provide interspersed dry land, convinced me it was a fool's errand to continue.

Unlike what you experienced, however, the weather was clear & epic, so I got some good shots over the two days I was out: 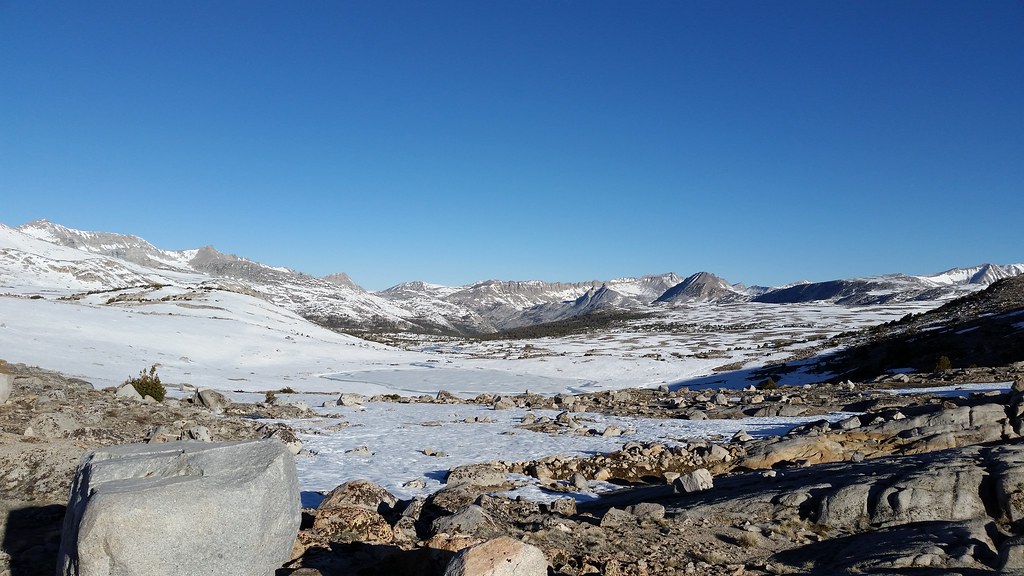