If you've been searching for the best source of information and stimulating discussion related to Spring/Summer/Fall backpacking, hiking and camping in the Sierra Nevada...look no further!
Post Reply
10 posts • Page 1 of 1

We wanted a short escape before school starts, and stopped in at the Summit Ranger Station in Pinecrest to see what they might suggest in the Emigrant Wilderness. (A lot of Carson-Iceberg burned last year in the Donnell Fire and is still not open to hikers.)

But since this trip was for my birthday, we wanted something where we wouldn't run into much of a crowd. That excluded Kennedy Lake (there are lot of people up there right now) as well as the usual suspects out of Gianelli and Crabtree Trailheads. Gem Lake, in particular, was mentioned in a recent magazine story (just possibly because I suggested it to the editors) and now Gem Lake is the icon destination of Emigrant Wilderness. Sigh.


So where else could we go? I asked about Chain Lakes. Nobody there. The trailhead, Box Springs, is a long drive on a difficult road. Not ideal for most hikers. It sounded perfect for us. And it was.


The road into the trailhead was really quite rough--absolutely not recommended for passenger cars, although our 2wd 2008 Ford Escape managed it with careful driving. It took us almost two hours from the Ranger Station to the trailhead, and that was a total of ten miles on Highway 108, 20 miles on paved County Road 31, and then 7 miles on rough dirt to the trailhead. That last 7 miles took us more than 45 minutes to feel our way along...


And then we got to the trail itself. While it is in fairly poor condition, with lots of downed trees, quite a few trail re-routes around the biggest ones, and some swampy areas, it was also chock full of the most amazing displays of wildflowers. Like walking through a botanical garden. And it is only two and half miles in total. It took us longer to drive to the trailhead than to hike the hike!


Chain Lakes themselves are really just one large lake (fishless, with no inlet or outlet stream) and three smaller and swampier ones. But boy was it peaceful. And we had only one other group for company, and they camped far away---there are tons of good campsites in this area. The weather was perfect, and mosquitoes were only about a 3 on a ten point scale. Perfectly manageable.

The next morning, we hiked up to the top of the nearby granite dome, for views of most of the Emigrant Wilderness, and even a distant view of Mt Hoffman to the South in Yosemite. And the road out seemed just a little better, since it was downhill, and we knew that it was passable the whole way. A really nice way to spend a birthday...

The photos are here: photos.app.goo.gl/wxRZNEKHrGCeShEm8

Great to have some peace and quiet in a beautiful place. Great report and photos. Thanks for posting.
www.sierrahiker.com
Top

The east side gets all the press, but the western Sierra can be nice too. Great pics, wildflowers are out in force at those lower elevations!
"Adventure is just bad planning." - Roald Amundsen
Also, I have a blog no one reads. Please do not click here.
Top 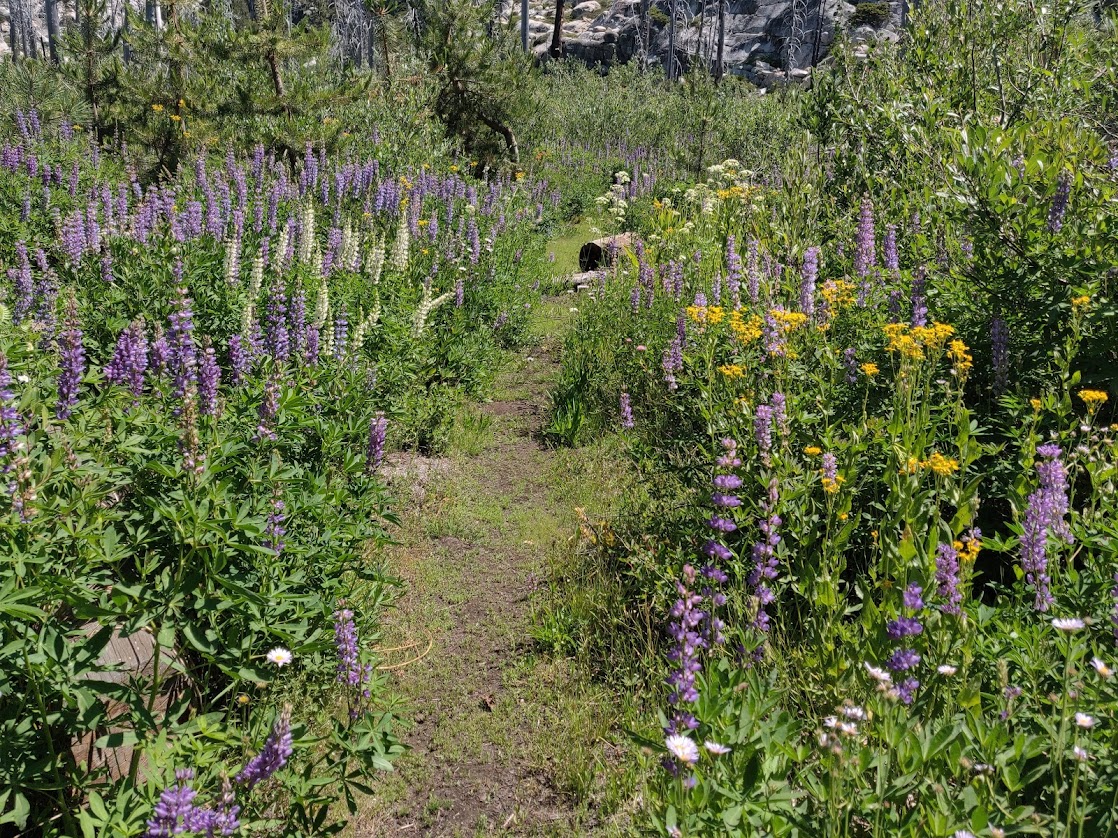 I've been to Chain Lakes in Emigrant Wilderness twice, once on a trip I was forced to leave early on in 2014 and then on a return trip in 2015. Each time there was 2-3 large groups consisting of 2 adults and 6-8 young kids each. So I had figured that the lake was easy to get to from a trailhead other than the one I had come from (Crabtree) and thus made a great lake to take kids to.
Top

The drive in is such a great gatekeeper for an otherwise short, beautiful hike to a fantastic setting. Without it I can imagine what the overuse would be like. I took my (then) 3 year old out there last fall with one of my brothers on an overnighter, and we liked it so much we're going back next month with both my brothers for 2 nights.
You must be registered and logged in to view the files/photos attached to this post.
Top

That is one fabulous picture.
www.sierrahiker.com
Top

Yes, I especially like the little boots! A real hiker!
-Phil
Top

Lovely! Thanks for adding to the thread!
Balzaccom

Little dude has a Pith Helmet!
“A decline of public morals in the United States will probably be marked by the abuse of the power of impeachment as a means of crushing political adversaries or ejecting them from office."