by wildhiker
For real solitude and wildness, try the mountain ranges of central Nevada - the Toiyabe, Toquima, and Monitor Ranges. All have substantial alpine areas (but no real lakes) above 10,000 feet wilh hundred mile views. All have good-sized designated wilderness areas with some occasionally-maintained trails plus additional roadless lands. Trails are not really even necessary in mostly open terrain with low brush. Friends of Nevada Wilderness has some area and trail information on their website: https://www.nevadawilderness.org. Biggest drawback is the long drive: about 8 hours from the Bay Area, probably the same from LA region.

by wildhiker
Closer to home, check out the Sweetwater Mountains along the CA/Nevada border, just north of the town of Bridgeport. Most trails there are 4wd or motorbike accessible, but little used. Cross-country travel is quite possible in the central roadless core. The mountains themselves are high with barren alpine summits and cirques with limber pine where you can camp, but the big draw is the view of the Sierra, particularly the Sawtooth Range. Here's a photo of the Sierra from the main summit ridge, taken on a July 4th trip in 2006.

by giantbrookie
It's interesting that in a SF Bay area newspaper the outdoor writer mentioned the wilderness area of California that he considered offering the highest odds of finding solitude. I was a little chagrined to see that in print, but, on the other hand, I really don't think a lot of folks will drive all the way to the NE corner of CA just because they read that article.

When I think of favorites, it is for the sorts of things that I like doing in the HIgh Sierra. Accordingly whereas I intend to spend quite a bit of time in the Snow Mtn-Berryessa Nat. Monument, it won't be doing the sorts of things I'd do in the High Sierra: enjoying hiking and fishing in alpine scenery--I plan to spend some time doing some serious geologic research.

But for my favorite things: mountain scenery and hiking and fishing...

OK, not visited a lot is that place in the NE corner of the state: South Warner Wilderness. I was seriously into topo maps as a kid and somehow found topo in this region and it made me daydream about going there someday: a place that seemed to be in the desert but had glacial lakes and...perhaps some nice fish? After dreaming about it for upwards of 15 years I backpacked there in 1988 and it was better than what I had daydreamed of. It is especially nice in early season when there are concentrations of wildflowers along the streams cascading of the east side. Some amazing hanging gardens. There is also some unique scenery that results from the volcanic bedrock some crazy badlands areas. There are some places that have fish, too, including some very nice ones.

Buck Lakes Wilderness. Northernmost Sierra and small. There is one off trail spot that is especially choice with a bird's eye view of the Feather River Canyon. There is not a lot of room to hike around and minimal fishing options, but one of them (off trail) is corresponds to the bird's eye view of the Feather. A little aside, note that the Keddie Ridge area I don't think is an official wilderness area, but it is sort of similar, although the top fishing spot there is now fishless as a result of cessation of air drops (was once a go-to spot for me).

Russian Wilderness. This is the one wilderness area outside of the Sierra where I've done the most backpacking (all between 1976 and 1991). There are some places that are moderately popular but many spots you can get away from crowds without much effort. It is not very large so you can't design any super long hikes (similar to the two areas above) but there are some choice destinations. There are several lakes that have big fish and one that is a true legend (and it's off trail no less!).

Marble Mtns Wilderness. This one is big enough to put together some long hikes. Has a bit of everything and there are some good fishing spots here. The variety of conifers here is striking. I've never seen so many different conifer species growing fairly close together. The geology is cool, too--"Marble Mtns" do reflect the type of rock.

Trinity Alps. Also big enough for some long hikes but it gets more visitors than the Russian and Marbles. It has some popular spots that can get pretty crowded, too, but there are plenty of spots to get away. Some good fishing spots too.

The Klamath Mtns wilderness areas summarized above (Russian, Marble, Trinity Alps, Trinity Divide/Castle Crags) offer a lot of Sierra-like perks. Because of their somewhat lower elevation than the highest Sierra (say Tower Peak and southward) they are much like the northern Sierra (especially Desolation Wilderness and northward) but they are less visited.

Dinkey Lakes, Kaiser Wilderness, and Jennie Lakes Wilderness are not on the most popular list, but they see plenty of visitation so I wouldn't call them hidden gems.

by Wandering Daisy
A "hidden gem" does not have to be "world class". And who decides what is "world class"? Unfortunately, "world class" had become "paradise lost" due to the internet and everyone's bucket list. Different people have different ideas of what they consider "beautiful" or what they seek in wilderness. I love Yosemite Valley and make peace with the crowds. I also love solitude, but not so much that I would forego scenery. Others seek wildlife or flora. Others seek photographic gems- some big scenery, others the small such as the tiny alpine flowers. Others need fish. Verity is the spice of life.

Each wilderness area has its prime time and fortunately many of the "hidden gems" are most beautiful when the Sierra is not accessible. I was motivated to get into many obscure places in pursuit of climbing each California county high point. Otherwise I would have never even thought of these areas. Not all are designated wilderness.

To add to the list (but not wilderness areas), a friend and I were going to do a trip from Tuolumne one June, and snow closed the road, so we explored the area between the White Mountains and Hwy 395. There are some really nice rocks called Benton Crags, similar to Joshua Tree. Another climbing area just south of Mono Lake includes Iris Slab. Then we climbed Glass Mountain (all snow to the top) that had a wonderful view of the Sierra.

giantbrookie wrote: ↑
Mon May 11, 2020 8:29 am
... note that the Keddie Ridge area I don't think is an official wilderness area, but it is sort of similar, although the top fishing spot there is now fishless as a result of cessation of air drops (was once a go-to spot for me)....

The Keddie Ridge area (Homer, Hidden, and Deerheart Lakes) got all tied up in Maidu tribal politics. Those lakes are prominent in their creation mythos, and still the location of the tribal rite-of-passage ceremony for their youth. So the Forest Service designated the area a Special Cultural Emphasis Area and basically gave the tribe veto power over anything the Forest Service wants to do in the area. The trailhead was already moved back 1.5 miles by blocking the road, refuses to maintain the trails or even let volunteers clear the trails. They are now almost impassable from the Whitethorn and down logs. Plus the tribe doesn't like non-tribal members using the area and you risk vandalism to your parked vehicle. A local Meetup hiking group get in trouble for posting a hike in the area on the Meetup website. For all practical purposes it is now tribal land closed to the locals who are pissed about it.

by dougieb
Another way to address the overwhelming range of potential destinations, is to just pick a part of the state. Pick a section and say, I'm going to go somewhere in that section this year. Rather than looking at a list of destinations, just look at a map and say, "I'm going to get to know that area this year." Then you're letting geography be your guide instead of other people's experiences.

I guess my real point is that, as much as I used to put together a bucket list and micromanage my trips to try to see very specific things, it really is all the places in between that make up a majority of the experience and once you're in the mountains it's hard to go wrong. I guess that's what I'm going for is an emphasis on getting to know a region instead of getting to a destination. No wrong way though.

dougieb wrote: ↑
Tue May 12, 2020 7:49 am
Another way to address the overwhelming range of potential destinations, is to just pick a part of the state. Pick a section and say, I'm going to go somewhere in that section this year. Rather than looking at a list of destinations, just look at a map and say, "I'm going to get to know that area this year." Then you're letting geography be your guide instead of other people's experiences.

Love this strategy! I feel like it works particularly well in the Mojave desert where there's no shortage of strange ghost towns, hot springs, wilderness, and historical oddities to stumble upon.

One area of the Sierra I randomly stumbled on when wandering aimlessly was Granite Chief Wilderness. It's desolate and beautiful, and I didn't see another soul while I was there. The only other wilderness in the state I can think of that hasn't been mentioned yet is Ventana Wilderness on the east side of Big Sur. It's a gem, but far from hidden. The terrain is dotted with huge waterfalls, scenic creeks, and peaks, but there's a lot of people and few trails because most of them have become overgrown with poison oak. But you can find some pretty amazing places with full body coverage, a decent enough immunity to oak, and a big bottle of Tecnu.

by jhfowler
I love the San Gorgonio Wilderness, which is now contained in the new Sand to Snow National Monument just west of Joshua Tree. It ranges from the Whitewater River flowing through gorgeous desert at 2,300 feet to the peak of Mount San Gorgonio at 11,503 feet, so it's possible to do trips there year round.

Here are just two days I spent backpacking there:

And some pics. Enjoy! 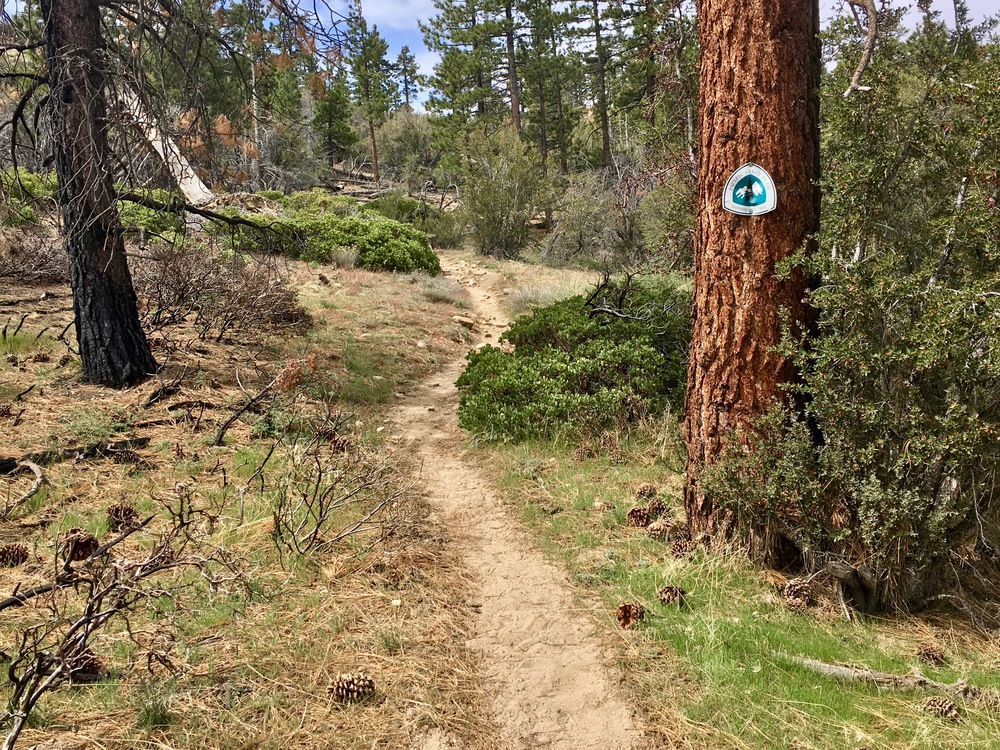 by paul
Have been to Snow Mountain a couple times, quite nice on a small scale; but it takes some getting to, driving wise. Also the Yolla Bolly Middle Eel wilderness - similar in many ways.
I would take a different tack - find the hidden gems IN the the big sierra Wilderness areas. There are lots of nooks and crannies in the Sierras that see very few visitors, especially if you venture off trail a bit.

paul wrote: ↑
Wed May 13, 2020 5:22 pm
There are lots of nooks and crannies in the Sierra that see very few visitors, especially if you venture off trail a bit.

No doubt about that.
All times are UTC-07:00
Page 2 of 4
Powered by phpBB® Forum Software © phpBB Limited
https://www.phpbb.com/