If you've been searching for the best source of information and stimulating discussion related to Spring/Summer/Fall backpacking, hiking and camping in the Sierra Nevada...look no further!
Post Reply
8 posts • Page 1 of 1

This year’s big hike was into the Emigrant Wilderness. Emigrant Lake to be exact. None of us had been there before but I had heard about the fishing and have kept it on my list for some time. As something else new to us we decided that we would try a spot camp out of the Kennedy Meadows Pack Station. Actually we had planned and booked this trip last year for July but the snow was still too deep so at the last minute we had changed it to a full backpack from Leavitt meadows. This year snow would not be an issue. 2020 had been a dry winter with little snow and we would be in the middle of a heatwave our entire trip.

Kennedy Meadows PS is a little crowded for me but they have a great set up and worked hard to make everything enjoyable for us. We drove in on Saturday and had booked their log cabin which is generally held for pack customers. It’s rustic and primitive, has a little loft with a full bed, 4 singles down stairs, fridge, stove, and its own bathroom for a reasonable price.

My wife Debbie and I in front of the cabin.

Friend Sherry up in the loft

Sunday morning (my 60th birthday) early while our gear was being packed we grabbed breakfast burritos and the six of us were on our way. For whatever reason I was surprised that the area was as arid as it was. One good thing to come from that and this being a drier than normal year was we had no mosquitos. I don’t think that I saw 5 the entire week and didn’t have a single bite.

None of us are riders to begin with but we certainly were not ready for a six hour, ruff mountain trail ride. We were all very sore by the time we got to camp. The only real drama we had with the horses came from mine. She was the biggest and best behaved horse of the bunch. Until we got to the top of Mosquito Pass. She had started acting peculiar then right on top of the pass crossing she just went stiff on me and did a straight down buffalo drop. Instantly the wrangler who was right behind me started yelling for me to get my feet out and off the saddle. I was way ahead of her and just cleared the stirrups when my horse rolled over and started kicking her legs out. The wrangler pulled her saddle and after gathering it all together it was decided that they would leave her on top and get us down to camp. After dropping us in camp they took one of the mules who they said was in love with her and left him for the night. When they came bock for them the next day everything was cool and they said that she has a history of colic. We did get a couple of pictures when they dropped us off.

Since it was my birthday my wife took a picture of me with our packers.

It was a great site, close enough to the water but off of the trail. We sat up camp and started filtering water and complaining about 6 hrs in the saddle. Not sure that I would want to go that route again but it was nice to do something different. It was also nice not to spend 2 days all uphill getting there.
That’s the trail just below and between the girls. The lake is on the other side of the trees.

We spent Monday doing some day hiking and fishing. We didn’t catch a lot of trout but the size and fight was very nice. I think that the smallest Bow that I caught all week was about12-13”.

Monday had been really warm all day and we were hoping that it would cool off by the time we planned to pack up and move on Wednesday. The plan was to backpack to Middle Emigrant Lake for at least a night or two then work our way out from there. We would spend the last few days hiking to Emigrant Meadow Lake, over Brown Bear Pass, and on back to the trailhead. Tuesday Morning we woke up to smoke in our little valley. After hearing from others that the fishing was much better where we were and not liking the idea of backpacking in the smoky air we changed plans. We decided to just stay at Emigrant and see if the smoke cleared and maybe hike out back over Mosquito Pass. Mostly smoke filled pictures after that until we got back over the hill and down to Relief Reservoir.

The good thing was that on Tuesday I figured out what worked and we all started catching more fish. 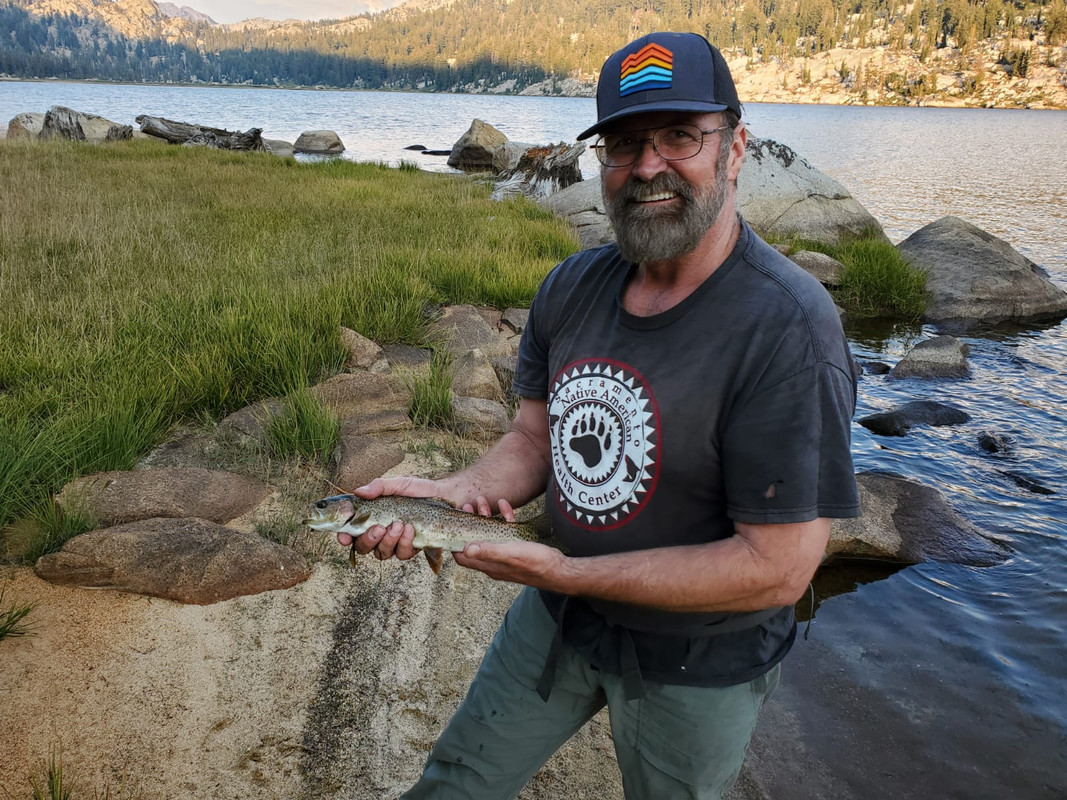 When the smoke hadn’t gotten any better by Wednesday night we decided to pack out Thursday morning ahead of schedule.

Going over the top of Mosquito Pass on our way back to Kennedy Meadows.

As we dropped in elevation the smoke wasn’t near as bad so we decided to take our time. We stopped for a night at Sheep Camp and the last night at Relief Reservoir. 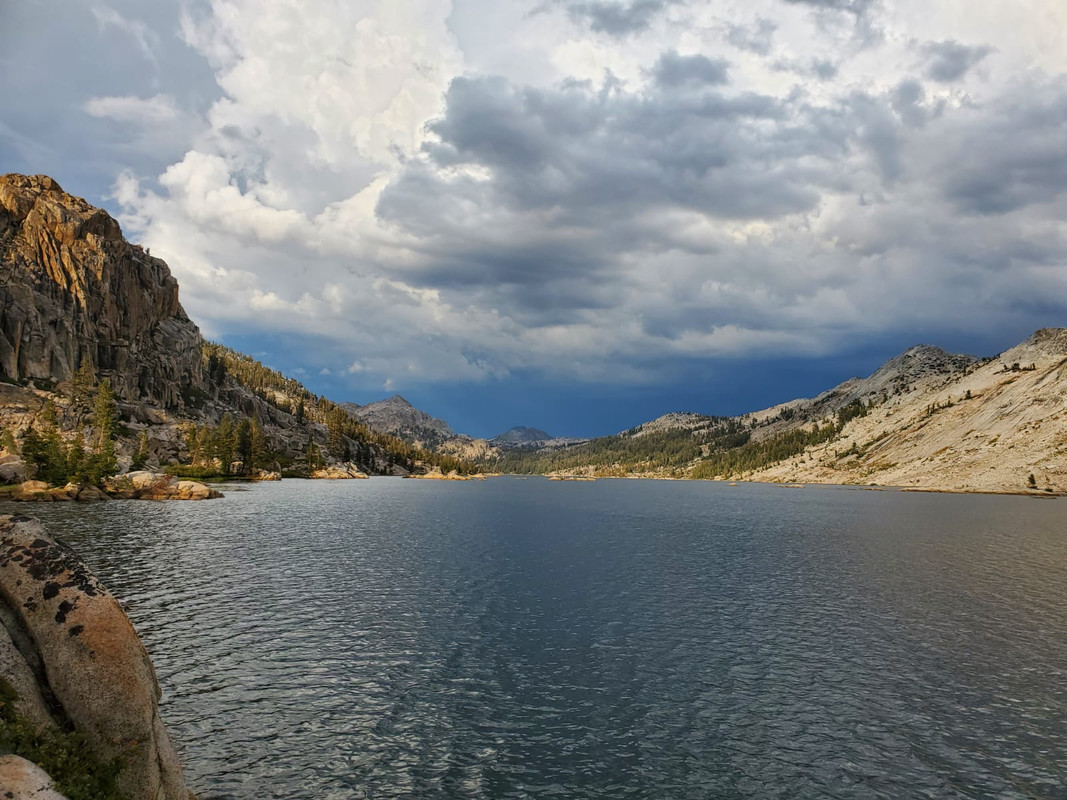 The last miles back into the trailhead. 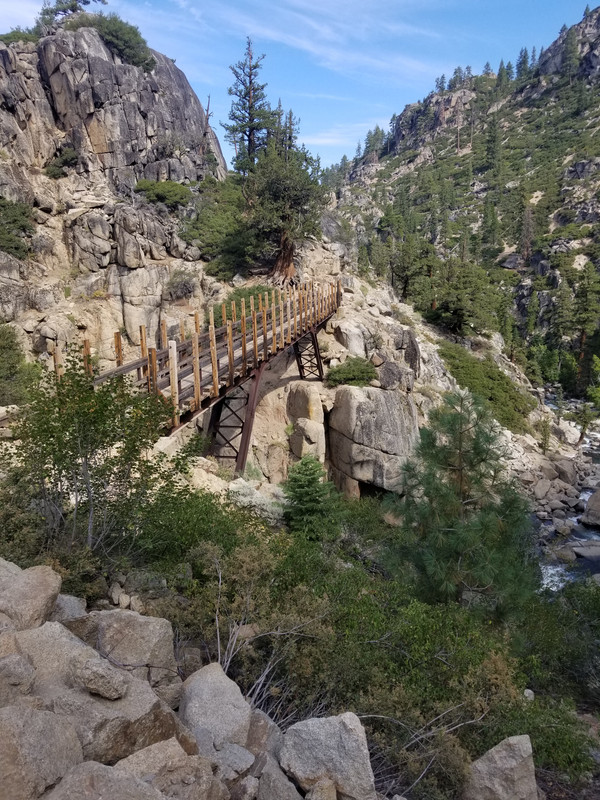 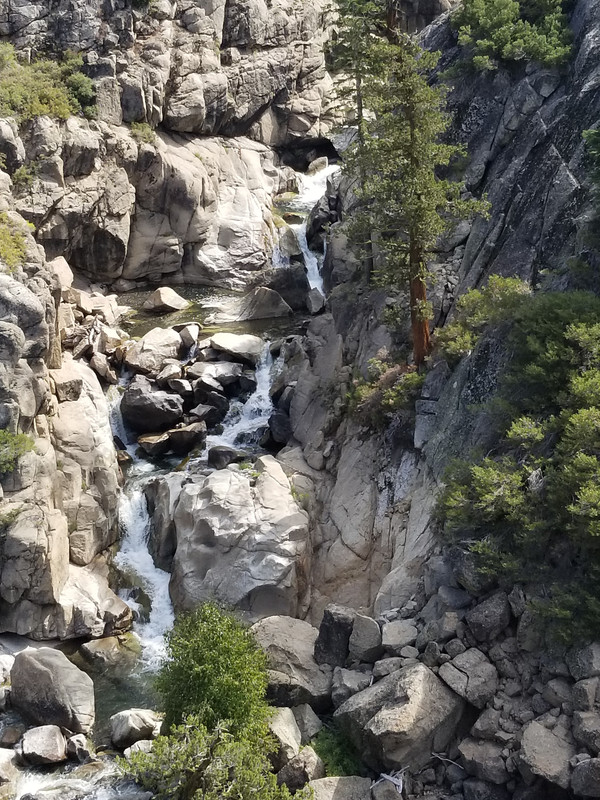 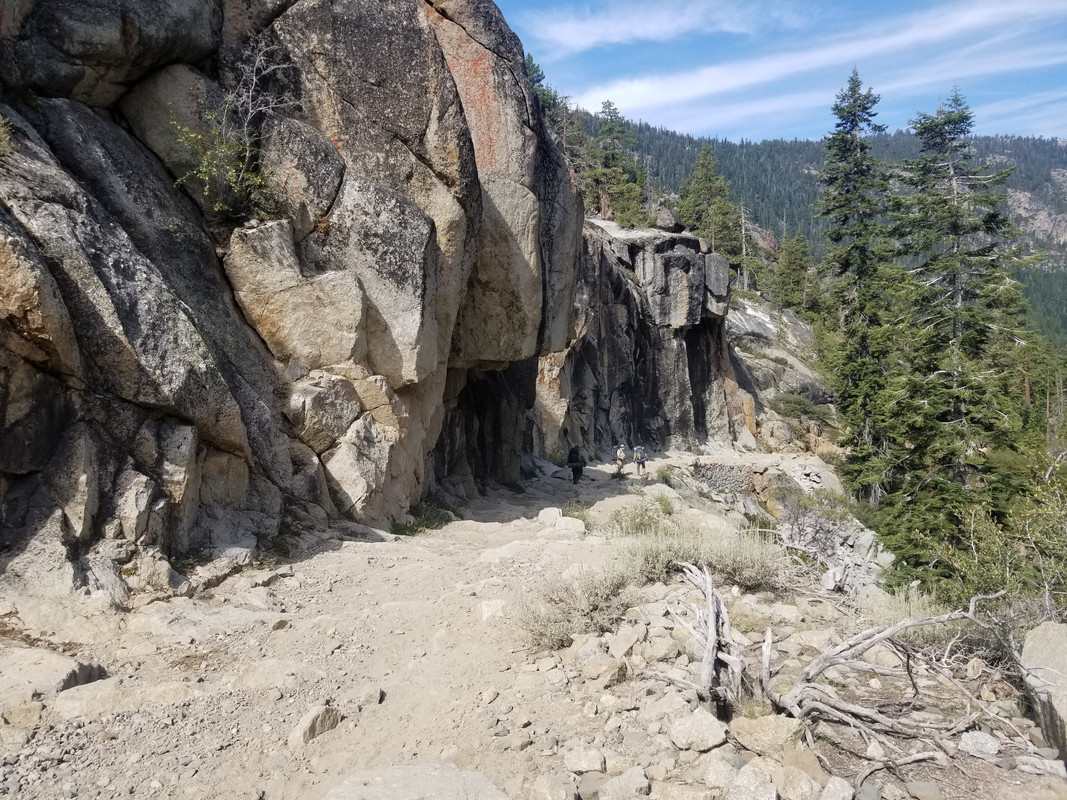 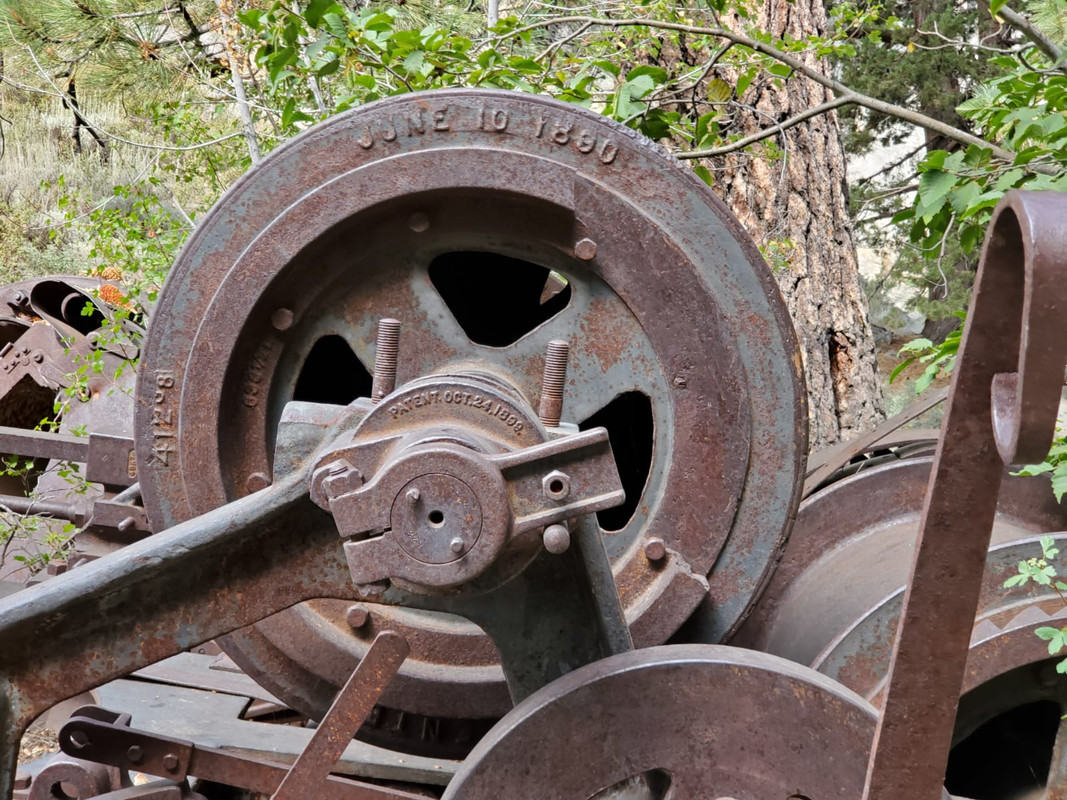 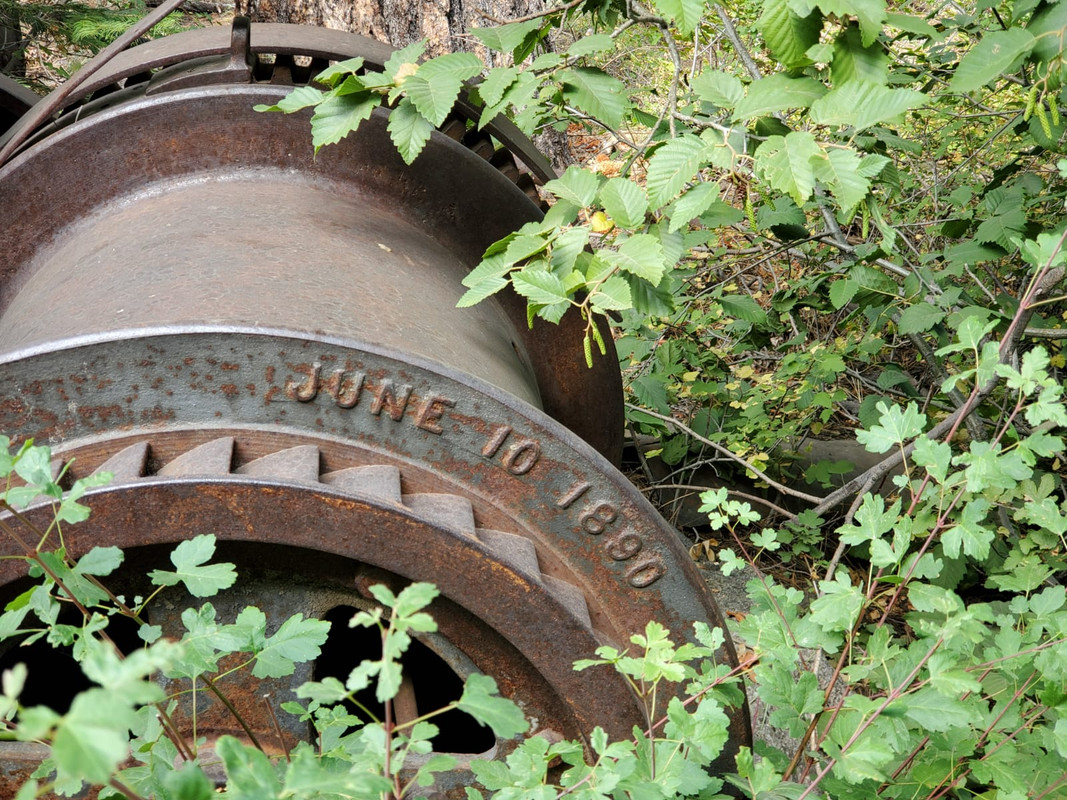 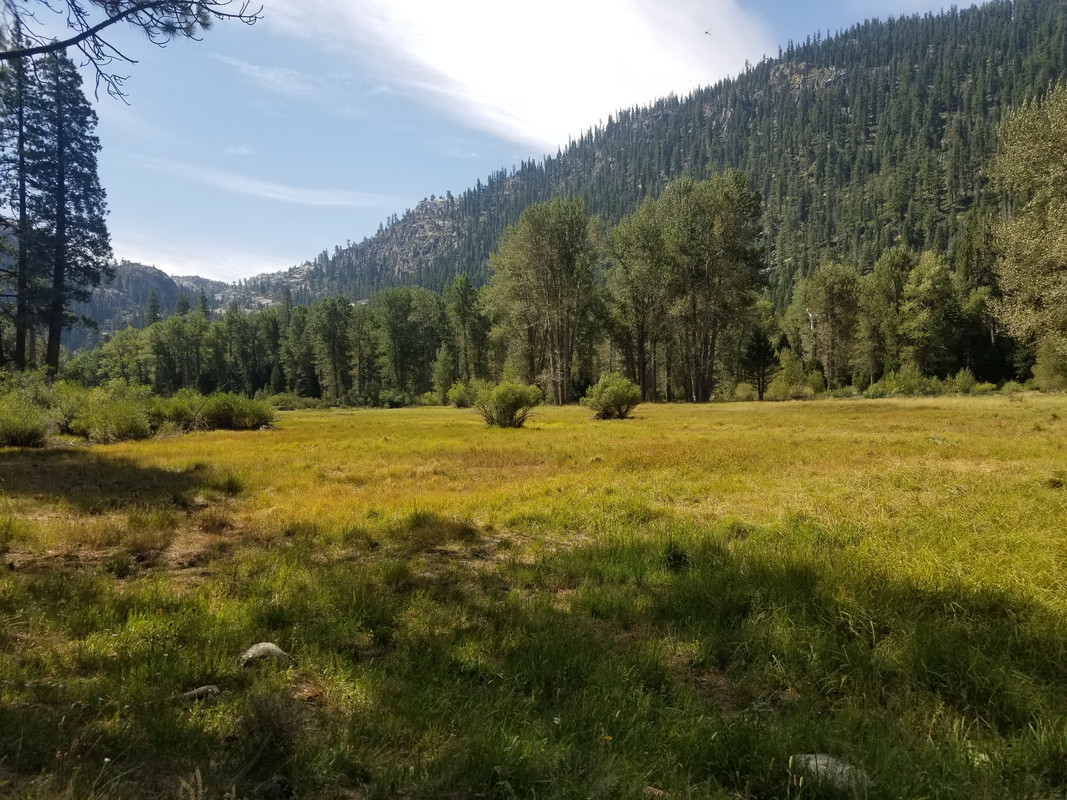 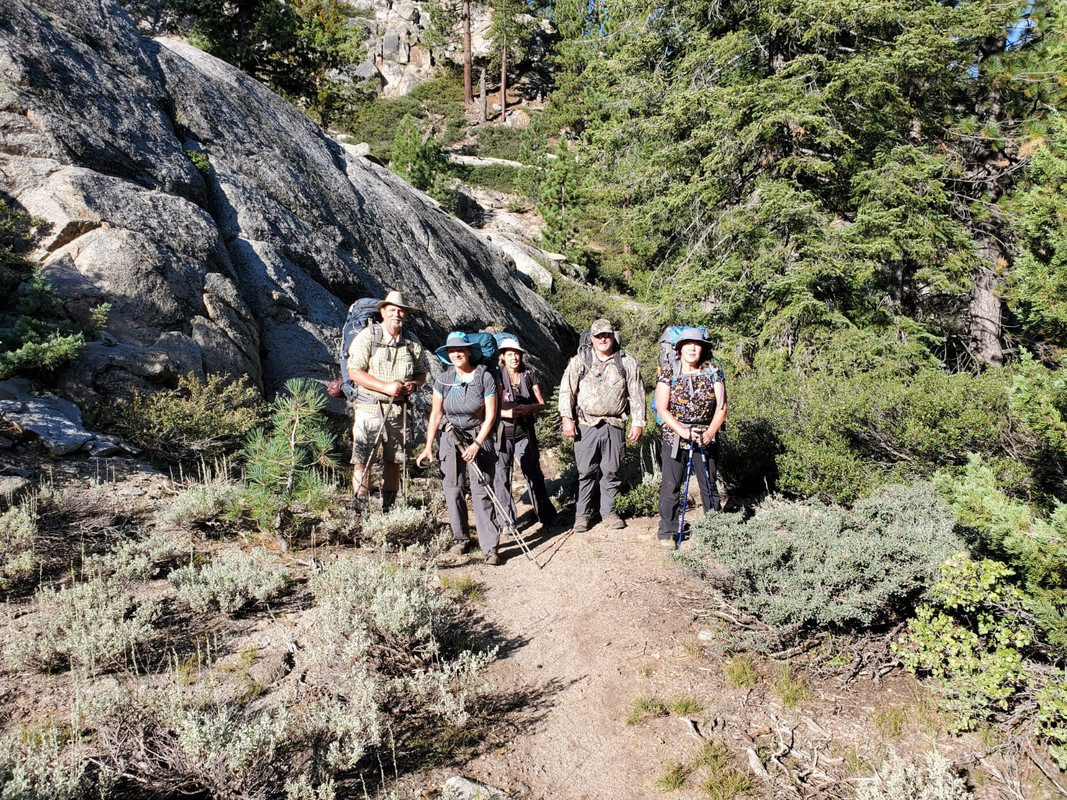 It’s kind of funny. Despite the sore butt from the horses, smokey skies, heatwave w/high temps, and changing our itinerary and shortening our trip it was still a great time. I’ve been doing a weeklong trip with this same group of friends every year for the last 10 or so and we always have an awesome time together. I’m already thinking of what we might do next year and looking forward to it.

"On this proud and beautiful mountain we have lived hours of fraternal, warm and exalting nobility. Here for a few days we have ceased to be slaves and have really been men. It is hard to return to servitude."
-- Lionel Terray

Just curious; did you get packed in all the way to Emigrant Lake in a one-day turn-around (only charged for one day)? Sheep Camp is an established horse campsite so I thought they may only go that far for one day.

Last year I finally camped at Relief Reservoir. Although crowded (it was a weekend) the campsites are nice. The trail down to Relief Reservoir is not marked but pretty distinct and easy once you know where it is.
Top

Monster fish, and yeah, it's so much easier to push through discomfort with friends.

"Adventure is just bad planning." - Roald Amundsen
Also, I have a blog no one reads. Please do not click here.
Top

What a cool way to experience the Sierra. Maybe I should stop trying to lighten my backpack and get myself a horse

Too bad you encountered so much smoke, but I guess you knew that was in the cards going in.
Top

Thanks for the TR. Emigrant is definitely one of the best backcountry rainbow fishery's in the Sierra.

Looks like that was a great trip in tough times-- nice work, and great fishing! Timely Trip Report, as me and my wife, and friends are headed there tomorrow for a short trip, and we've never been there before. So thanks again Gary.
Top

Wandering Daisy,
Yes, Emigrant Lake is the max distance for the trail head one day turnaround. Our trip was actually an exception because the pack station was setting up a very large full service camp for a group at the far end of the lake. Once our wranglers took the mule up to the pass for the night they came back down to Emigrant so they could spend the next day helping set up the full service camp. It must have been a huge camp because we didn't see any clients until our departure day on Thursday. About 15 bow hunters came in for the archery season opener. I think that the camp may just stay open for both archery and rifle season.
"On this proud and beautiful mountain we have lived hours of fraternal, warm and exalting nobility. Here for a few days we have ceased to be slaves and have really been men. It is hard to return to servitude."
-- Lionel Terray
Top

Nice trip and report--what a terrific way to celebrate the big 60! I know the feeling having celebrated no. 60 on a week-long trip with my daughter in 2019. As for fishing, for some crazy reason I haven't been there (yet) but from your report and many others I've seen over the years this lake still fishes the same way it was described by Charlie McDermand in the 1940s. In other words, this is one place that truly fishes like the old days in terms of quality and quantity (find a copy of McDermand's Yosemite and Kings Canyon Trout to compare). I still do all this crazy off trail stuff but I have been leaning toward filling a too-long-lasting "void" in spending some time at Emigrant Lake and vicinity next year. Thanks for the added push.
Since my fishing (etc.) website is still down, you can be distracted by geology stuff at: http://www.fresnostate.edu/csm/ees/facu ... ayshi.html" onclick="window.open(this.href);return false;
Top
Post Reply
8 posts • Page 1 of 1