Share your advice and personal experiences, post a gear review or ask any questions you may have pertaining to outdoor gear and equipment.
Post Reply
41 posts

unless someone dances around outside their shelter in the middle of a storm.

That would be John Muir being himself, probably in a tree, if he were still with us.

unless someone dances around outside their shelter in the middle of a storm.

That would be John Muir being himself, probably in a tree, if he were still with us.

Too true. Muir had some extreme weather stories. Once he was out staking out the Lyle Glacier to measure the glacial advance when a storm approached. He hustled down into the Lyle Fork of the Merced River and made it to the Washburn Lake north end where there is a cave like shelter (you can see it from the trail), gathered wood and hunkered down to wait out a snow storm. When it was over he made snowshoes from tree bark and walked out.

Anyway, the picture below shows the tipping point for my backing pard (he has even more backpacking and hiking experience than me, which is to say, a lot), who up to that time was a tarp user. In the picture you can see his fancy tarp-tent on the left, and my Nomad tent on the right. Keep in mind my Nomad is/was about the same weight as his tarp-tent. So for about the same weight as a tarp-tent, I was dry on that trip through several rain storms and a snow storm. I have been in that tent in heavy hail storms too. After that trip seen below, he found a lite tent and used it or something similar ever since. Why bother with a tarp when for the same weight you can be comfortable and dry in lite-tent?
(OBTW, in the picture below, that is the most snow I have ever endured in the main backpacking season (late spring to the early fall) in the Sierra in 30 years of backpacking and thousands of miles of hiking. Prepare for these kind of condition and you will most likely be OK in the Sierra.)
You must be registered and logged in to view the files/photos attached to this post.
Last edited by DoyleWDonehoo on Fri Jul 04, 2014 5:12 pm, edited 1 time in total.
Doyle W. Donehoo
Sierra Trails:
http://www.doylewdonehoo.com" onclick="window.open(this.href);return false;
Top

I'm not sure what the distinction is between a tarp and a tent. Andy's photo of a flat tarp + bivy is what many people think of when someone says "tarp", but what about this set-up? 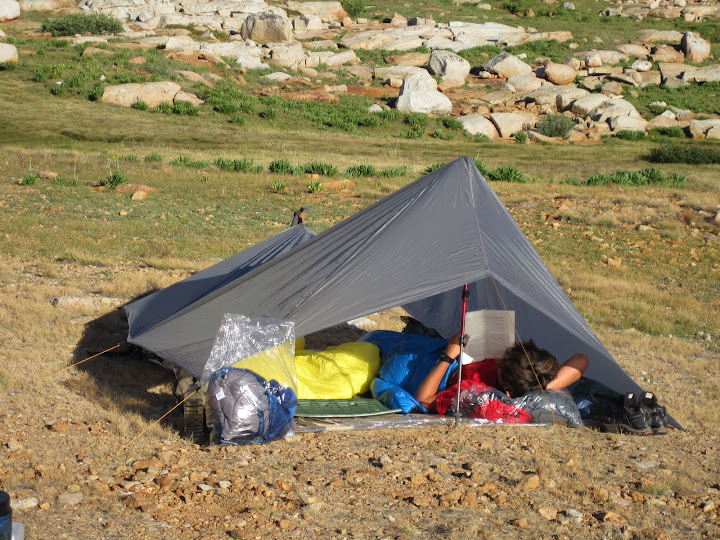 This is my DIY 2-man tarp that was based on the Shires' original tarp-tent plans located here:

Because I'm paranoid about getting wet, I pulled out his dimensions for both my solo and 2-man around 15-20% in both length & width. In addition, because I sewed them myself with 1st quality silnylon, and spent some time practicing beforehand, all the (sealed) seams & pullouts are pretty bomber.

With the low profile, twin trekking poles, guy lines and one-side pinned to the weather side, these tarps are (hopefully) not going to collapse or cause anyone inside to get wet. (The rain peak blocks blowing side rain.) Worst case scenario, I carry a Frog Togs poncho that I can unbutton and use as yet another piece of rain protection - it's essentially a flat tarp about 1/2 the size of the one in Andy's photo upstream.

Sorry, I too am not in the habit of stepping outside in a storm just to document the effectiveness of my shelter. However, this is Whitney during a second stormy day of snow/hail - the prior afternoon I was comfortably hanging out by the Crabtree RS in the middle of lashing wind, rain, thunder & lightning: 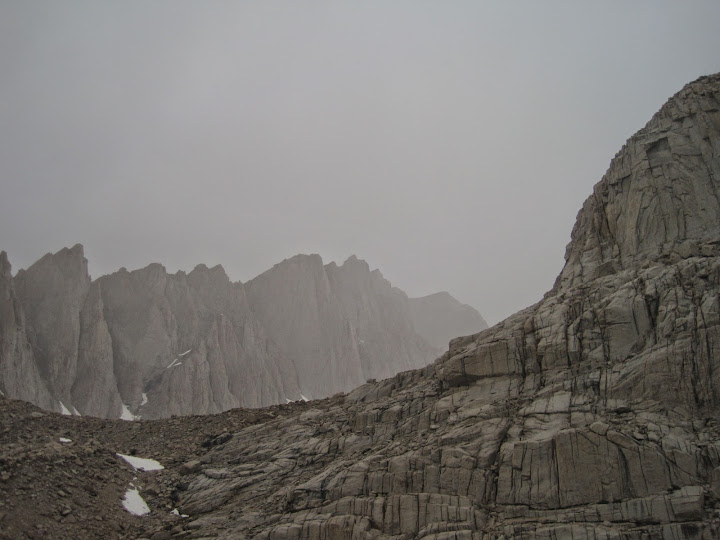 Not all tents are weather-worthy, simply because they are a tent! In an above timber severe storm many of the tents on the market will fail. I actually feel the safest in a mountaineering quality bivy sack. Not the most pleasant way to spend hours in a storm (sort of like being in a coffin), but your shelter will not be blown apart. And what is a "tent". Does it have to have a floor? Floorless tents are used in the winter by many. And what exactly is a "tarp"? There are a lot of hybrid designs out there now. Regardless of your shelter type, the key to surviving a storm is to have a quality made shelter, know how to use it properly, and have common sense to set up in the best place. Any improperly set up shelter, of any type, is useless.
Top

my tarptent "squall 2", despite its name, sucks in a storm with high winds.
Top

Sometimes it's not the tarp or tent that leaks, but what's underneath you that can fail and get you wet.
Last year I survived some hefty late season monsoonal storms in the UL Flycreek, pitched with only the ground cloth and fly. Most double wall tents have this option, but not freestanding without the inner. During the worst part of the storm, the ground became saturated and started to runoff around and through the tent, but no saturation or blow-ln from the fly. My savior? The Exped down mat kept me high and dry while water flowed under and saturated the footprint. 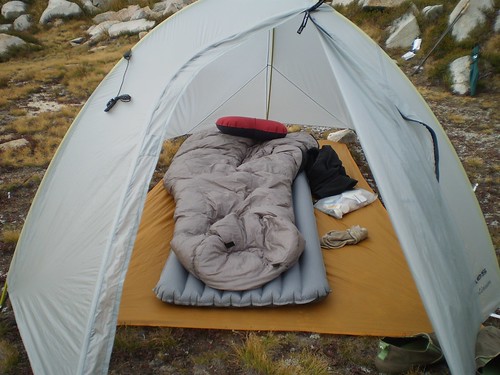 There is no such thing as "Free standing" in a severe storm. All tents and tarps have to be staked down. Even with stakes, I still back up each tent end by tying to the heaviest rock I can carry. Sometimes when the ground gets saturated, your stakes will pull out.

One advantage of a floorless shelter, is that if you get water from the ground, at least you can see where it is coming from, and try to trench for drainage. A small leak coming in to a "bathtub" floor tent, and all it does is pool inside the tent. You really cannot fix that situation during the storm unless you get outside and get wet.

If conditions get sketchy, I will put on insulating clothes, shoes and rain clothes, and stuff my sleeping bag in its waterproof bag, and then sit the storm out inside my tent. If the tent/or tarp were to fail, my sleeping bag will not get wet and I would be prepared for the rain.

My Tarptent Moment has some condensation issues, but it is really storm-worthy in high winds. It is quite symmetrical so can take winds from any direction no matter how I orient it when I set up. The floor will saturate slightly if it gets totally flooded underneath. I always bring a sponge to use in this case.

It is easy to say you "should not set up where you get flooded", but in reality, I have done that twice. What appeared to be a good drainage site was overwhelmed by 4 inches of rain in 3 hours. The other time it was user-error when I simply failed to notice that I set up in a bathtub because I was being swarmed by mosquitoes and my only thought was getting inside my tent!
Top

rlown wrote:you are way over-thinking the situations. If you choose to take a flat tarp, you know the limitations, and benefits of it before you go.

I understand the limitations of a simple tarp, at least in the context of my own limited skills with one. Unless it's a short trip I carry an 8oz WPB bivy sack along with the tarp and groundsheet. When the weather is looking wet and windy I run downhill for the forest. If I have a good tent I may still head for shelter but I don't feel that I have to. When the wind is bending the poles and pushing the fabric against my back or face I'm happy to be in a good tent rather than a tarp.

But I don't discount the notion out of hand that there are those who are skilled enough to be happy in a simple tarp in a windy storm. I just haven't witnessed it, haven't seen a video or photos and wonder sometimes if they're exaggerating a little.

rlown wrote:You won't get any pics of during the storm smiling. We are in our shelter as FG Dave said.

So I see. But I wonder if that's because you're in a tarp instead of a tent. I put on the raingear and get out in a storm sometimes to take a pee. I don't often carry a camera but if I had one I could shoot a photo in a storm. Why not?

IMG_4872.JPG
This wasn't particularly nasty. Early September at about 11K, something in between snow and hail, kind of windy but no big drama. We were inside drinking whisky. A tarp would have been a lot lighter on my back but I would have had a harder time sipping the whisky (or taking a pee) while cinched up in my bivy bag.


Here's another, sort of, since it had stopped snowing for a brief spell. First day of September at 10K. We got 3-5" of snow but it was virtually windless. A tarp would have been fine except perhaps for keeping the snow from drifting in the sides. I had to get out and "shovel" with my hands a few times that day.

summer.jpg
We weren't just smiling, we were laughing at the situation.
You must be registered and logged in to view the files/photos attached to this post.
Last edited by longri on Tue Jul 08, 2014 12:24 pm, edited 4 times in total.
Top

Wandering Daisy wrote:It is easy to say you "should not set up where you get flooded", but in reality, I have done that twice. What appeared to be a good drainage site was overwhelmed by 4 inches of rain in 3 hours. The other time it was user-error when I simply failed to notice that I set up in a bathtub because I was being swarmed by mosquitoes and my only thought was getting inside my tent!

It happened to me one time in the Tetons. We were dumb. It looked like such a nice spot, so why wasn't anyone camping there? It started pouring in the middle of the night. I turned on my headlamp and found our boots afloat, bobbing up and down in the vestibule. I had to get out in the downpour and trench with my ice axe for about 30 minutes.
Top

We have used a pair of TarpTent Squall 2s for several years with very good results. Keeps the bugs out and are very light. In 2008 my wife and I survived a hard windy thunder storm just under Glens pass. We stacked out and rocked over our stakes and didn't get a big wet. It was a very intimidating storm with much lightning, wind and sidewise rain. My faith in the Squall 2 was much higher after that event.

The TarpTents are tents not tarps but don't way much more than a tarp. I would only consider using a tarp in the fall after the bugs died off from the cold. I have used a bivy in the past but for 2 people the TarpTent Squall 2 is a lighter roomier option.
Jeff
Top
Post Reply
41 posts