Been meaning to post this, but here's a view of the Whitney Region from last weekend. This is from Candlelight Peak. Overall, the region got very little snow from last week's unsettled weather. I went up the Meysan Lake drainage and significant snow did not start until a bit below Meysan lake which was frozen over still. There was, however, one patch of snow down low that was a bit sketchy in the morning when it was hard and slippery. Nothing on the south slopes of Candlelight.

The heinous scree slopes leading above Meysan lake to LeConte, Mallory and Irvine were still covered in snow, but looked like it was starting to melt out in spots. Might be good to get on those soon! I was wishing I had more acclimatization, because the NE ridge of Irvine was looking doable right now, but I just didn't have it in me.

Guess all that could temporarily change based on what looks to be almost a week's worth of unsettled weather starting to move in this weekend.

Did a day hike on 04-29-2015 from the Onion Valley trailhead to Kearsarge Pass. A few patches of snow that were easy to cross, should be gone within a couple of days, if not already gone. Photos tell the story:

Looking up towards the pass from east side: 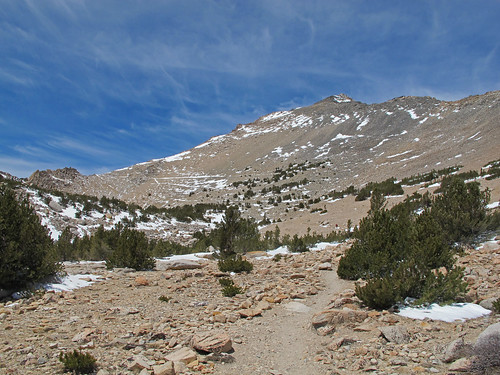 Looking west from the pass: 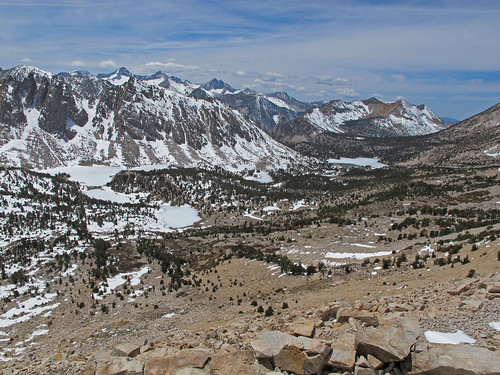 My wife and I had a great time hiking up Woolyback out of Horseshoe Meadows this past Saturday. They had just opened the road on Friday, so we made a last minute decision to change plans and head up that way. Like other areas this far South, it was very dry. We didn't have to touch any snow on the way to Muir Lake, or going up Woolyback. Old Army Pass looked to be melting out, but there was still snow on that upper portion that gets a bit cliffy/exposed with hard snow. Couldn't see New Army Pass, but the rest of the route up Langley look good. Cirque Peak wasn't holding on to much snow, either. The lakes all looked a little low.

Beautiful day out there and pretty secluded due to the road just opening the day before. Only saw one other person the whole day.

At the junction for Muir Lake

Our first time at Muir Lake. Nice and secluded this day and very peaceful. Seems a bit more off the beaten path than the main Cottonwood Lakes

Looking over towards Old Army Pass. Might be melted out soon!

Difficult section encountered:
Snow made following the trail difficult on west-facing slopes: But now there are footprints; we appeared to be the first out past Lake Valley since the April 23 storm.

FWIW - A half hour ago it started - was expecting rain but temps dropped 20º in 15 minutes and now heavy Styrofoam-like pellets/ snow covers everything in sight - no flakes. What was green and springlike yesterday - now winter again at 7,800 - Mammoth.
Stay tuned...
Mountainman who swims with trout
Top

I just saw on the local LA news that 12" was expected in the high Sierra tonight.
"On this proud and beautiful mountain we have lived hours of fraternal, warm and exalting nobility. Here for a few days we have ceased to be slaves and have really been men. It is hard to return to servitude."
-- Lionel Terray
Top

Mountainman who swims with trout
Top

The great bulk of hikers are in the SoCal mountains experiencing a spring time 'winter advisory'. LOL - sort of. I really like this one, along with the comment:

Stage 1: your cold, but your not going to die
Stage 2: your a bit colder and there might be a 10% chance your not going to make it from the cold.
Stage 3: it is so cold you have no choice but to set up your tent, crawl into your sleeping bag, and sip on whisky to stay warm because there is like a 30% chance you might die.
Stage 4: there is a 50% chance or greater that your going to die and you have no choice but to crawl into a friends sleeping bag, pop some Viagra for extra blood flow and start chugging whiskey, both for warmth and the awkwardness of you and your friends erection
Stage 5: stage 5 is simple, "where the hell is the chopper!!!!!

Made it to Wrightwood in the snow and only reached stage 2. This photo however was from San Jacinto where we hit stage 3 and a half.......Viagra was a thought.
Top

I just read that the FS reported 20" of new snow in Tuolumne Meadows.

"On this proud and beautiful mountain we have lived hours of fraternal, warm and exalting nobility. Here for a few days we have ceased to be slaves and have really been men. It is hard to return to servitude."
-- Lionel Terray
Top

He must have broken off the snotcicles before snapping the selfie.
“Posterity! You will never know, how much it cost the present generation, to preserve your Freedom! I hope you will make a good use of it. If you do not, I shall repent in Heaven, that I ever took half the pains to preserve it.”

Return to “Conditions Reports and Information”