Discussion about winter adventure sports in the Sierra Nevada mountains including but not limited to; winter backpacking and camping, mountaineering, downhill and cross-country skiing, snowboarding, snowshoeing, etc.
Post Reply
15 posts


alpinemike wrote:Getting up Lamarck will be interesting again.. as that was one hell of a long slog with a lot of gain. The necessity for crampons given that you have snowshoes is definitely going to be hard to judge. I would definitely plan on some slow days if there is still a good deal of snow. It may take close to a week .. to do that trip.

I think a good possible starting indicator would be when the road was cleared to N Lake. That would eliminate the long road walk from the closure, and also signal that major snow fields were melting and the remaining pack was consolidated ice/snow.

I'm shooting more for an early season "hike" (no snowshoes), with crampons/ice axe for the 3-4+- miles of snow fields over each pass, but otherwise clear (albeit wet/muddy) trail. Even so, I figure 1mph over the passes is a good estimate - right now, I've got 4-5 days penciled in. 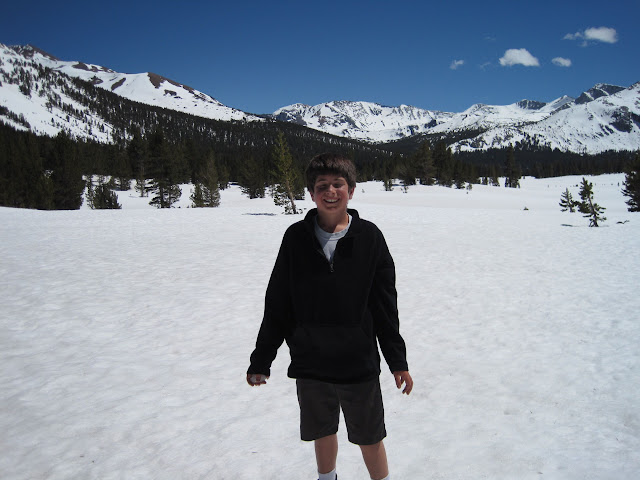 The park's east entrance had just opened that morning - we were staying in June lake and were one of the first cars allowed in. I distinctly remember the parking lot right @ the Tioga entrance (bathrooms & Gaylor lakes TH) had a solid wall of snow about 3-4' high. These types of conditions obviously warrant snow shoes or xc skis at 9.5-10k.

My guess is that Mammoth could get over 400" inches this year, so all things being equal (which of course they're not), the trail through Dana/Lyell could be clear by mid-June. That could be a fairly good correlation for the PCT section between Evo & Kearsarge, which would suggest more of a mid-June date if one were interested in primarily hiking, and the expectation of 3-4-5 miles of consolidated snow over each of the big passes.

At the moment Mammoth is tracking approximately like an average year. The 30 year average is about 350 inches. So we'll see what happens. It's probably snowing there right now.

Anyway, I hope you're right and we get more than 400 inches. I'd rather ski late than hike early.
Top 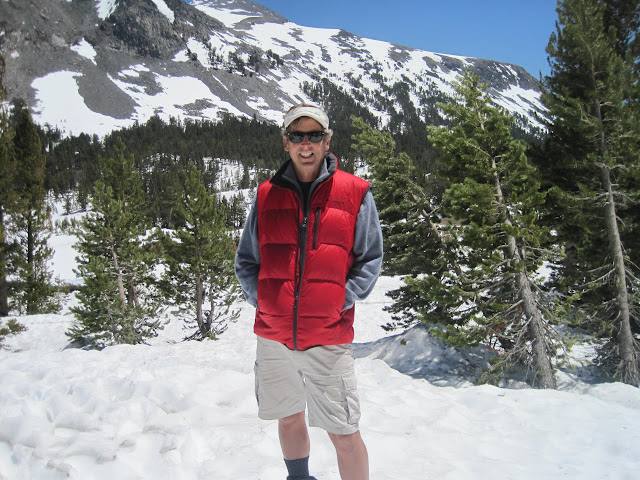 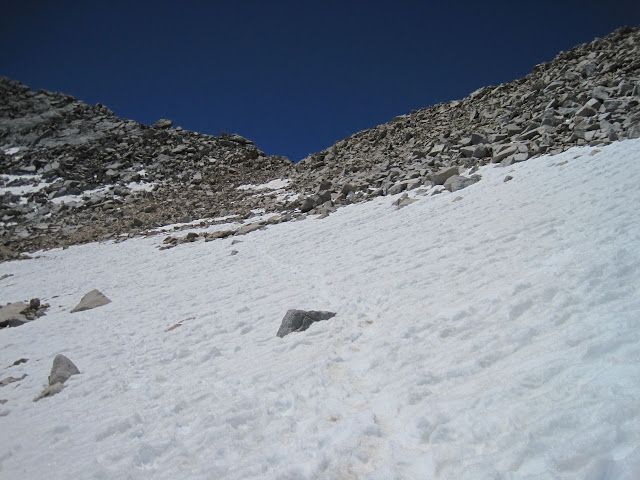 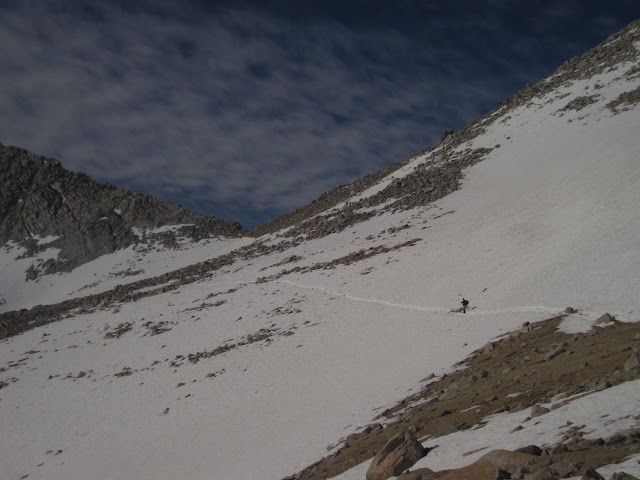 Shorts and a down jacket -- so California.
Top

longri wrote:Shorts and a down jacket -- so California.

Here's Kearsarge last year on May 28 - it was a day hike (warm-up for Whitney MR), so I didn't even take a jacket. LOL 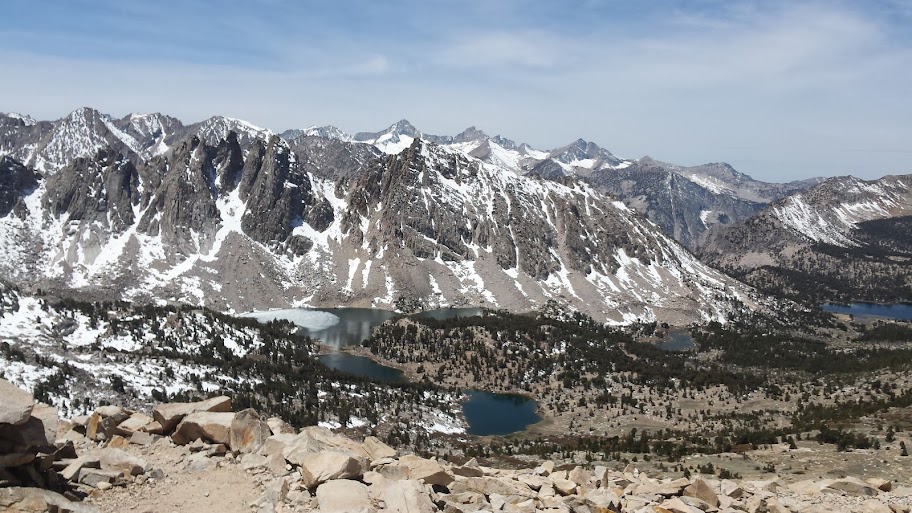 Do you have a chart that goes back to 1968-69? Each of the big El Nino snow years correspond pretty well with famous El Nino surf years. The most notable (besides this year, which while only being an average snow year, has been perhaps the best surf year in the modern post 50s era) were 1969, 1983 & 1997. 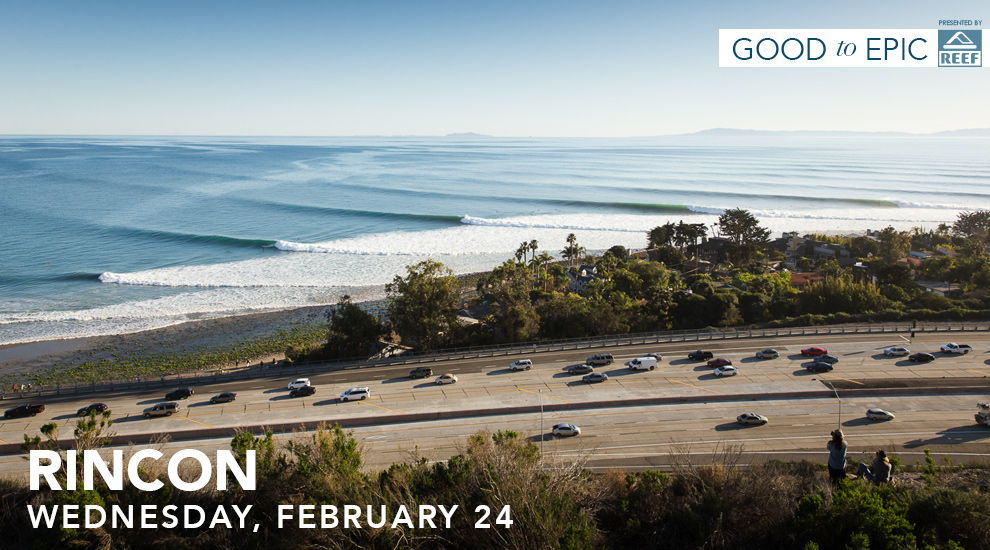 Now that I'm in OC, I tend to go south. On this day, I bee-lined it to a fickle Baja point that was absolutely off its rocker. Had a late afternoon, then early morning session, then drove back home. Aye carumba!
Top

I pulled the Mammoth snowfall information from this website. It matches pretty well with what is on the Mammoth website. I looked again and found a jpeg of a spreadsheet that included the 1968-69 season, which I've added to the bar graph.

It's worth noting that the line graph above, the one that shows Mammoth Pass, is in total inches of water content. Mammoth Mountain tracks total snowfall. The first guys (LAPWD) care about water; Mammoth cares about skiing. But it means that the two don't necessarily track all that well since snow density is both variable and changeable. I assume Mammoth Mountain tracks initial depth; they probably want to make it look as big as possible.

I also have a graph I pulled from the SF Chronicle last year that shows historical values for the "Sierra snowpack", whatever that means exactly. It seems to suggest that 1969 was a bigger year relatively for the Sierra than it was for Mammoth Mountain. But it's very likely that it is a measure of total water content.

I'm so happy it's raining and snowing right now, even though it canceled my plans for the weekend.