Discussion about winter adventure sports in the Sierra Nevada mountains including but not limited to; winter backpacking and camping, mountaineering, downhill and cross-country skiing, snowboarding, snowshoeing, etc.
Post Reply
6 posts • Page 1 of 1

I’ve had my eye on Castle Peak’s summit ever since our family snowshoe hike to Castle Pass last December so did not hesitate to take the opportunity on President’s Day. The snow had melted off the trees since, but I did not miss the Christmas card setting, as my focus was on the peaks above. I was unsure of what snow conditions I would encounter so brought snow shoes and carried microspikes, thinking the sun and wind-exposed top might be icy and patchy. I don’t mind over packing on day hikes since I consider it training for backpacking.

After an hour of snowshoeing on packed powder, I reached the pass at 11am and began the ascent toward the NW slope of the summit. I assume Castle Peak got its name from its resemblance to a castle with 3 main turrets. The western turret is the first summit reached when approaching from Castle Pass. It is the easiest as it is only a steep class 1 walk-up. However, the true summit, only a few feet higher, is the eastern turret. My plan was to reach the western summit and assess whether to continue to the true summit, which requires a short class 3 climb. 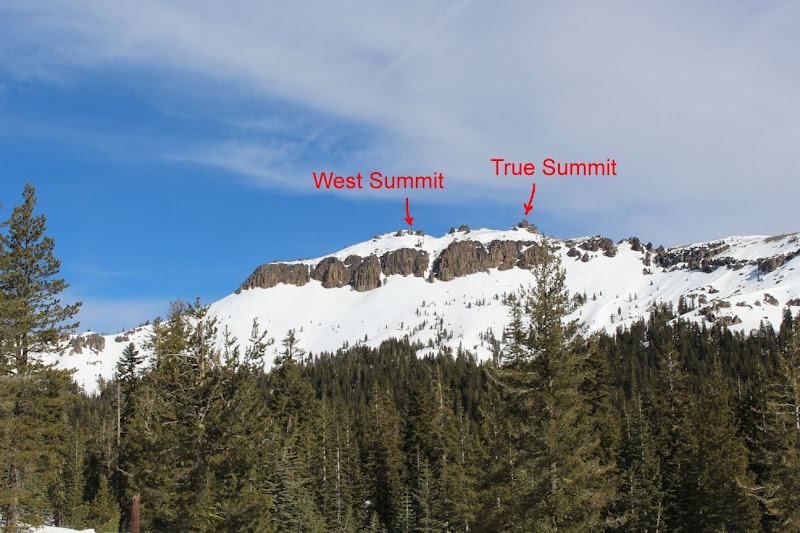 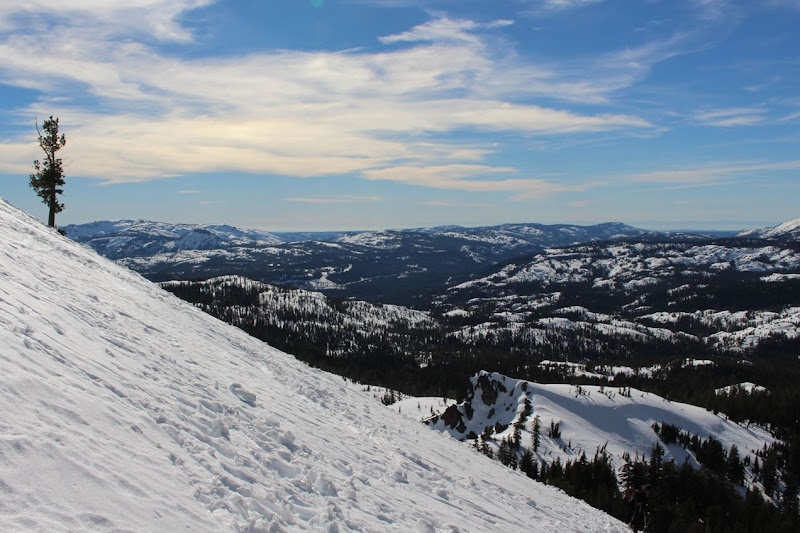 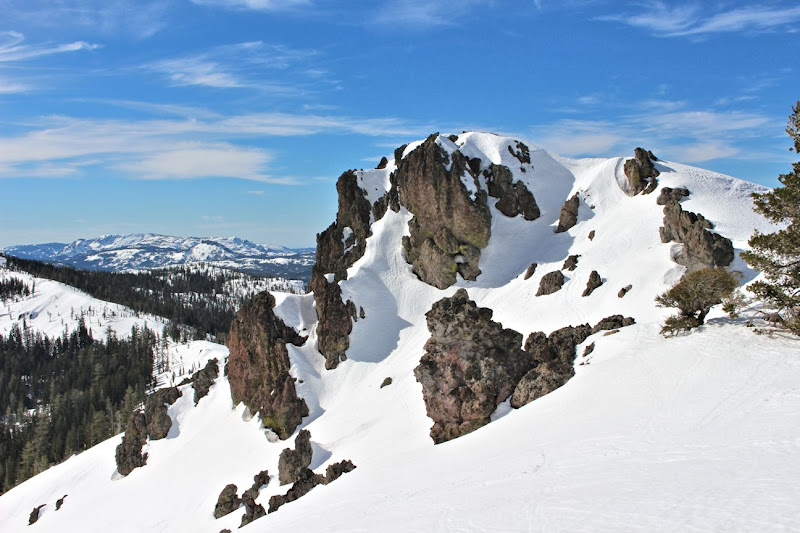 The approach to the western summit was steep with a few icy patches. My snowshoes were capable but I would have felt more comfortable with crampons and ice ax, which I left in the car. I met a fellow adventurer, Jim, at the top and we both surveyed the path to the eastern turret. The section that was visible didn’t look too difficult, plus we had safety in numbers, 2. And it was still early, 12:15pm. After accidentally going up the wrong snow chute at the center of the middle turret, we continued east until I recognized the familiar summit block that I’ve seen online. We made our way around to the eastern side of the summit block through and up some deep powder. My snowshoe occasionally lost its traction, pushing downhill through the steep powder. Jim had a few jarring postholes so using crampons had its own issues.

View from the West Summit. True Summit peeking behind the right side of the middle turret 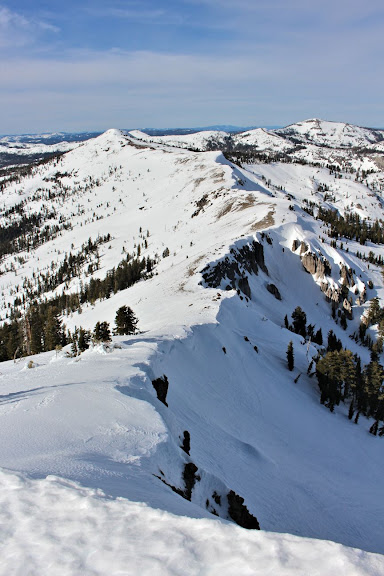 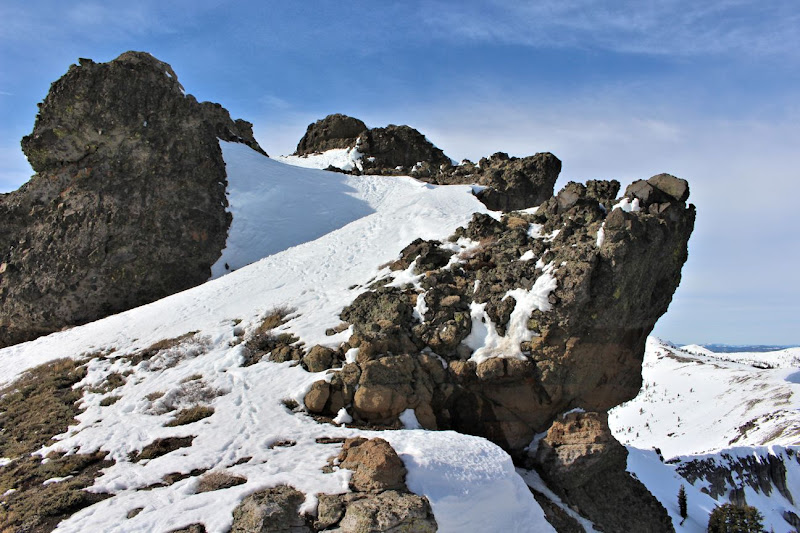 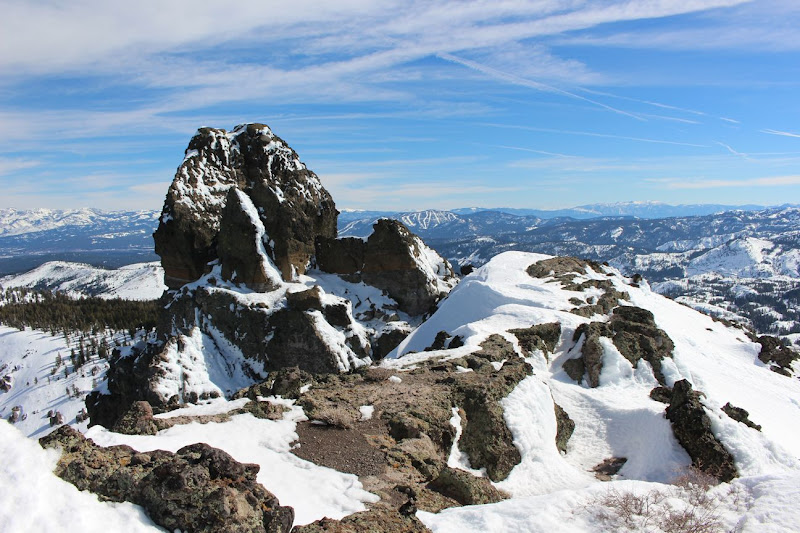 We situated ourselves just below the class 3 scramble to the top. Jim climbed first while I changed into my rock shoes. My wet hiking boots tend to slip on rock. The volcanic rock provided plenty of solid hand and footholds so even though it was a vertical 50 feet up, I felt secure, especially with the rock shoes, and stepped onto the summit at 1:30pm. We did not bother looking for the register box as it was probably buried under a couple feet of snow. We just enjoyed the view. The sky was clear and the temperature was ideal and I was glad to have continued to the true summit.

(An interesting geological tidbit from the California Dept of Conservation webpage, http://www.quake.ca.gov/gmaps/MS/ms_60/ ... onner.html is that the Castle Peak turrets were deposited during a volcanic eruption from Mt Disney, about 5 miles due south) 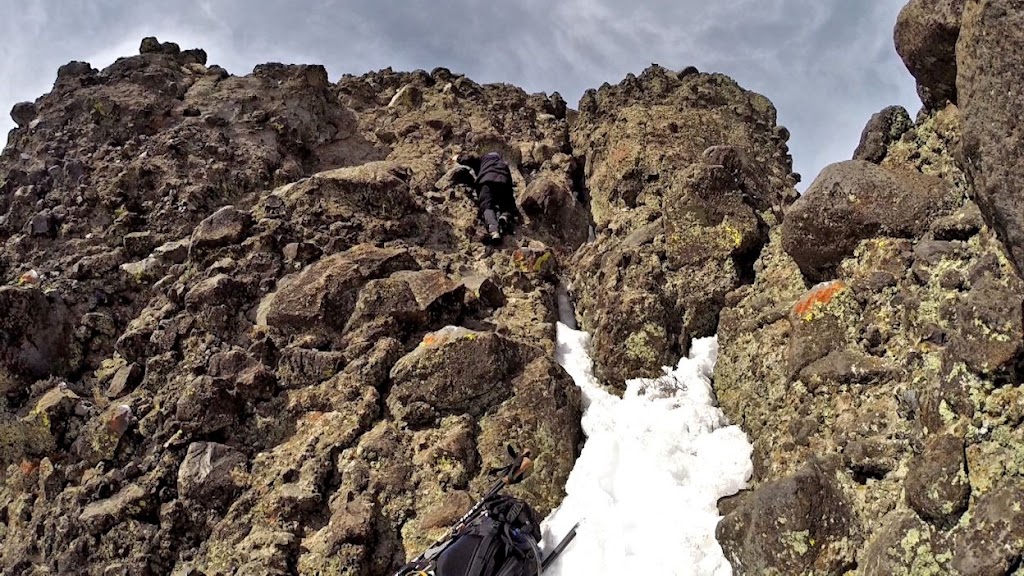 View east from the True Summit 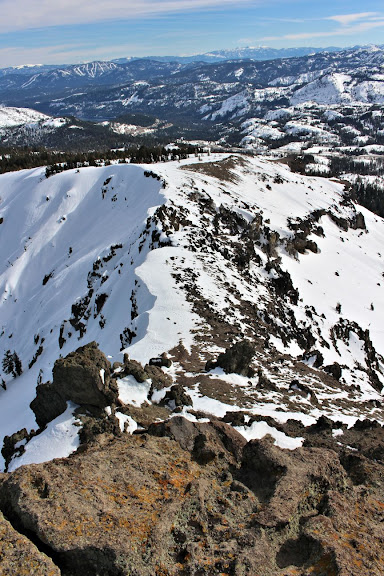 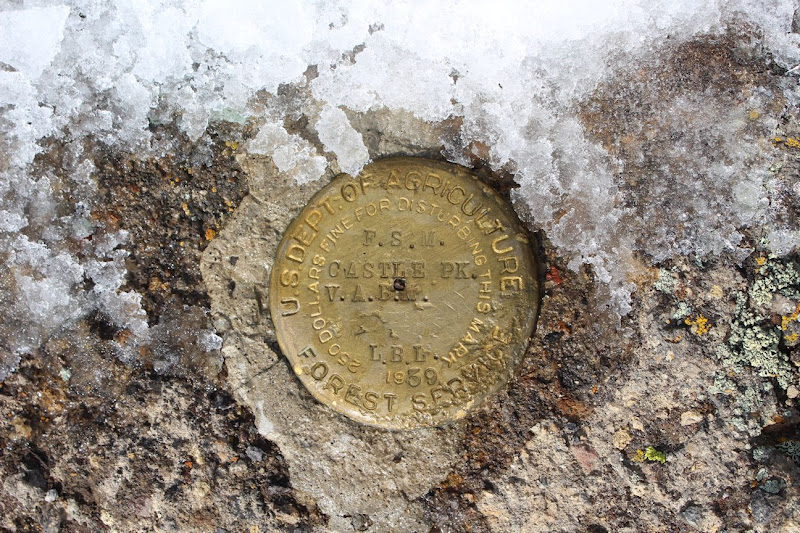 Panorama from the True Summit

Climbing up the summit block

A very nice report! Glad to finally see some snow on the "hills."
Top

Awesome! Nice photos too. It's good to see someone getting out and enjoying the weather, which looked wonderful. That looks like a fun climb, but that steep stuff always kind of creeps me out for some reason and I chicken out. Thanks for the trip report.
Top

That is awesome I was at Frog lake Cliffs a day earlier, one gets a great view of the back? east side of castle peak from there
IMG_0007.jpg
You must be registered and logged in to view the files/photos attached to this post.
The woman who follows the crowd will usually go no further than the crowd. The woman who walks alone is likely to find herself in places no one has ever been before. Albert Einstein
Top

Gazelle, that's a great shot of the backside. I've never been to Frog Lake but I did see it from the peak. Maybe one of these days. I wonder how much more snow has accumulated from the recent storm in that area?
http://mytrailmixx.com
Top

I got about 18 inches and i live by Kingvale. Now nice and sunny again
The woman who follows the crowd will usually go no further than the crowd. The woman who walks alone is likely to find herself in places no one has ever been before. Albert Einstein
Top
Post Reply
6 posts • Page 1 of 1