A forum that'll feed your need for exploring the limitless adventure possibilities found in "other" places. Post trip reports or ask questions about outdoor adventures beyond the Sierra Nevada here.
Post Reply
6 posts • Page 1 of 1

The 10-pound male fox was captured on national forest land just outside of Lassen Volcanic National Park, near the town of Mineral. The fox was collared and released at the capture location, and CDFW biologists have been impressed by the distances it has regularly been covering despite rough terrain and high elevation.

“The data gathered during the capture and from the tracking collar will provide significant insights into the ecology of these foxes,” said CDFW Environmental Scientist Jennifer Carlson. “We have already been surprised by the large area the fox has been using and the distance it has traveled — it has averaged over seven straight-line miles per day in very rugged terrain.”

While Sierra Nevada red fox historically ranged widely in the upper montane subalpine zones of the Sierra Nevada and Cascade ranges in California, in the past century its abundance and distribution has declined dramatically.

A state-listed threatened species since 1980, the Sierra Nevada red fox has been the subject of intensified study by CDFW over the past decade. The primary objective is to capture and affix GPS tracking collars to foxes to better understand the size and characteristics of the elusive red fox’s home range and habitat use, its denning sites and reproductive rates, and its health and disease ecology.

In 2008, CDFW used scat-detector dogs to survey portions of Lassen Volcanic National Park and the adjacent Caribou Wilderness. From 2009 to 2011, CDFW used trail cameras and hair-snaring devices to survey high-elevation habitats in the Cascade Range from Mount Shasta to Lassen Peak. At that point, foxes were detected solely in the Lassen Peak area, and the population is believed to consist of only about 20 individuals. Efforts to capture and collar them from 2013-2016 were unsuccessful, yet CDFW continued to document red foxes on trail cameras and to collect genetic samples from their scats and hair. CDFW hopes to capture and collar as many as four more red foxes this year.

Source: https://cdfgnews.wordpress.com/2018/03/ ... ma-county/
You must be registered and logged in to view the files/photos attached to this post. 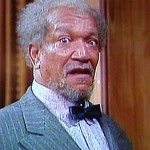 Wait, wrong one....
“Those who desire to give up freedom in order to gain security will not have either one.”

It took me a while to figure that out.

I used to love when he got in to it with Aunt Esther:

[youtube_vid]<iframe width="854" height="480" src="https://www.youtube.com/embed/5qzRSU2NWmE" frameborder="0" allow="autoplay; encrypted-media" allowfullscreen></iframe>[/youtube_vid]
“Those who desire to give up freedom in order to gain security will not have either one.”