Discussion about winter adventure sports in the Sierra Nevada mountains including but not limited to; winter backpacking and camping, mountaineering, downhill and cross-country skiing, snowboarding, snowshoeing, etc.
Post Reply
8 posts • Page 1 of 1

I would like to get to the top of Mt Rose this winter, but know nothing of winter conditions up high. Can anyone offer any advice on this subject?

I am originally from SoCal and during the last few years here in Reno I've noticed there are some big differences between winter mountaineering here and in SoCal. For example, it's colder here and the snow is deeper. This means we generally need snowshoes to get almost anywhere here in the Northern Sierra in winter (in SoCal, because of the daily thaw and freeze cycle, and the snow rarely being very deep in any case, you can generally boot it up almost any mountain all winter).

I'm used to using crampons and ice axe up high, but I've been wondering whether they would be necessary on Mt Rose on the summer route. It doesn't seem to be that steep up there.

We find snowshoeing to the waterfall along the Tahoe Rim Trail to be a challenge, due to all the tracks going in every direction and also because when you do find the correct track it's very lumpy and difficult to walk on, so it's slow going. I've been thinking about using the Relay Ridge Road instead, though that adds some distance. Still, might be a lot easier to navigate in winter.

Here's Ingrid breaking trail from Third Creek Pond (at the Relay Ridge Road) to the waterfall, with Mt Rose in the distance: 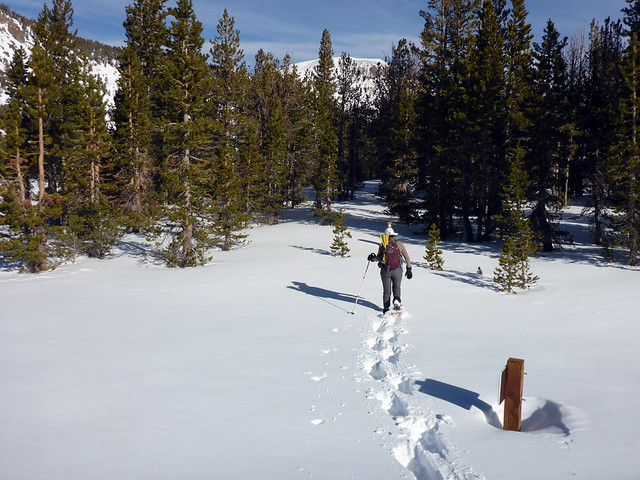 Snowshoeing just seems to take so much more time than booting it. I would get up and down Mt Baldy in SoCal in about five hours (four miles and 4,000 feet each way, though the snow only started at about the halfway point). The day I took the photo above we made a loop to the waterfall, hiking up the Relay Ridge Road, then to the waterfall and back via the Tahoe Rim Trail (about six miles, and not very much elevation gain or loss), and that took about five and a half hours just by itself. Getting all the way up to the top of Mt Rose and back seems like it would take all day, a very exhausting day.

Another option we are exploring is simply spending a night: snowshoeing up Relay Ridge Road and setting up camp a little above the meadow, then summiting the next morning.

I've been up Mount Rose many times, but always on cross country skis. Starting from the highway, there is a jeep road all the way to the summit. Of course it is covered in several feet of snow during winter, so you really need either skis or snowshoes in order to stay up on the surface. When you get most of the way to the top, there is an old tram station, and that is normally where we had to stick on climbing skins.
In the event that others are along with insufficient skiing experience, they can fool around in Tahoe Meadows, which is on the south side of the highway.
Top

The jeep road you mention is the Relay Ridge Road, when when you say it goes to the summit I guess you mean up to the transmission station on Relay Peak, whence you can skin across the eastern flank of Mt Houghton over to Mt Rose. I'm afraid my XC ski skills are not up to such a journey, though I bet I could do it with an alpine touring set-up.

The jeep road is the black line at lower left in this map (the blue line is the traditional Tahoe Rim Trail summer route to the top): 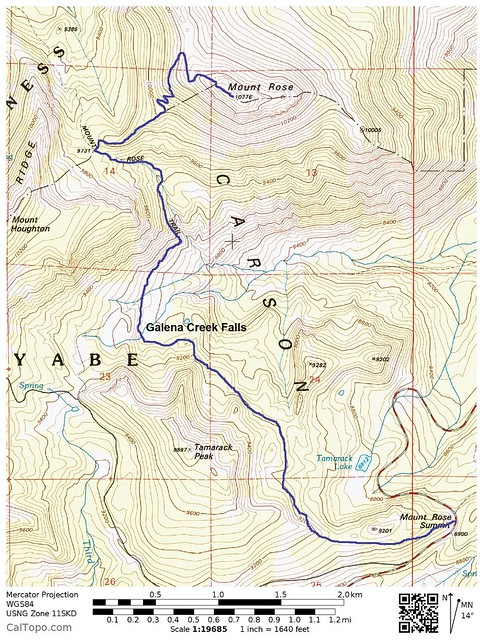 The little pond just under the word "Spring" at left is Third Creek Pond, where a trail leaves the road and heads up to Mt Rose via the waterfall and/or Upper Galena Meadow. That's the route I would mostly likely take in the winter.
Nunc est bibendum.
Top

The blue line is the route that I always took. Alternatively, go to the south of the highway and up to Slide Mountain, also a jeep road.
Top

You can easily get into the ski area from Mt Rose Campground, which is across the highway from Mt Rose Summit parking lot, though if you actually venture out onto the pistes you will get run down by skiers and snowboarders. We were up there on Sunday (on snowshoes): 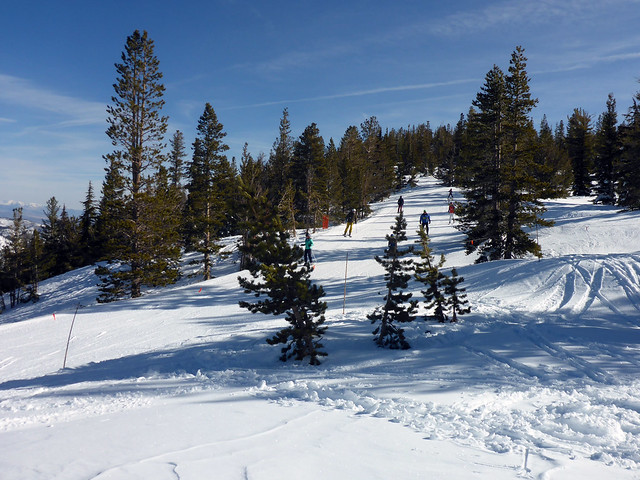 There's a road that continues up the mountain (Slide Mountain) to the right.

But now I'm trying to figure out how to get up to the top of Mt Rose, which is a not very challenging ten mile round trip summer hike.
Nunc est bibendum.
Top

What are conditions on Mt Rose in winter above the meadow? Above the gully?
Nunc est bibendum.
Top

Which meadow and which gully?