If you've been searching for the best source of information and stimulating discussion related to Spring/Summer/Fall backpacking, hiking and camping in the Sierra Nevada...look no further!
Post Reply
6 posts • Page 1 of 1

A couple months ago I asked for some feedback on a hiking trip some buddies and I were planning, and here is the report.

9/1 We drove to Yose, planning on taking the 5PM YARTS bus from the Village to Tuolumne Meadows CG. However the traffic into the park and in the Valley was so backed up we missed the bus by quite a margin and drove to TMCG instead. After a dinner at the Lodge, we found some level pieces of ground in the Backpacker's CG and fell asleep under the stars.

After a quick breakfast Monday AM, we headed to McGee Lake via Glen Aulin. I was quite surprised by the numbers of hikers on this trail. We stopped a couple times to fish, and were able to land some nice brookies and rainbows on dry flies. Once in the GA area the trail became markedly steeper and the river changed from a gentle meadow creek to a crashing mountain stream. 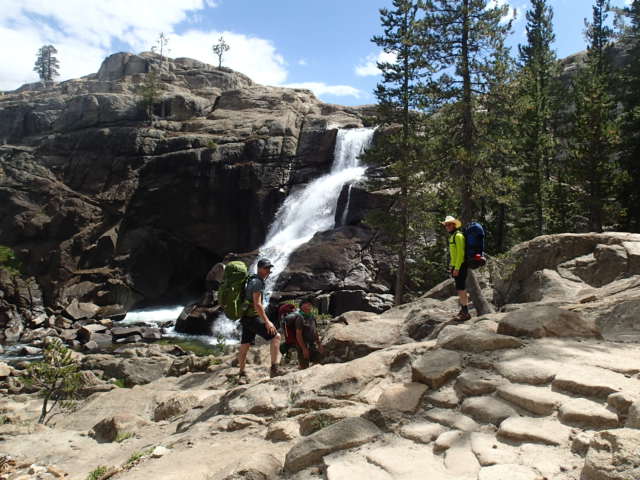 At GA we turned left and found a fire ring on a small dome and suitable sleeping ground a little west of McGee Lake. Much fewer hikers on this trail.

Hoping for more fish we walked on to Cathedral Creek, which had fish. But the water was so still, and the fish so skittish, that a falling pine needle would cause them to scatter. Also lots of mosquitoes. So after a short time we walked past McGee back to the Tuolumne, where we were able to catch dinner on streamers in the plunge pools. And take refreshing baths.

Dinner was delish. On a last-minute whim I had brought some parchment paper and we used it to cook the fish. The fish were moist and perfect and there was no cleanup except burning the paper in the fire.

After learning the previous night that one of my co-hikers had brought the loudest, squeakiest inflatable sleeping pad available, I made sure to bivy far away and slept like a rock.

Unlike my three partners, I am not a coffee guy, so while they huddled around the jetboil every AM, I got my gear ready to go.

We headed west and squoze water (and gave more blood) at Cathedral Creek. The skeeters there were a 5. The trail from that creek to Tenaya Lake is much steeper, both up and down, than anything the previous day, and although I run and workout regularly, it was a little eye-opening. Very few other hikers, though.

At Tenaya we had lunch, squoze more water, swam, and then headed to Sunrise Lakes. Again, a surprising number of hikers on this trail, mostly coming back from daytrips to Clouds Rest.

The trail up to the Sunrise Lakes turn off was quite steep and long. But, make it to the turn off we did, turned left, and camped that night at the first Sunrise Lake. It is a beautiful lake and after several hours of intense thunderstorms that thankfully just skirted the lake, we fell asleep. 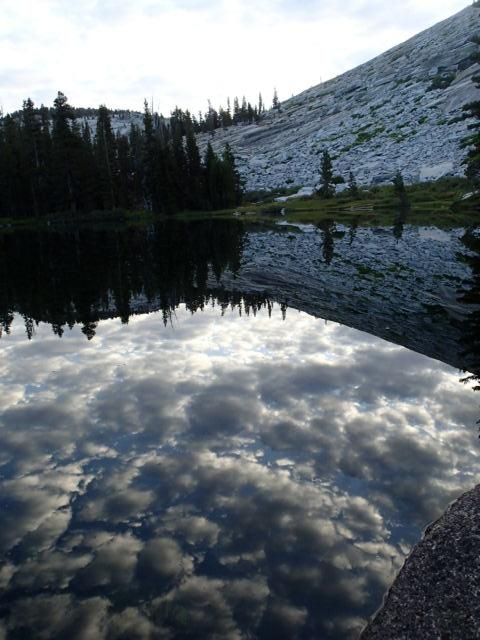 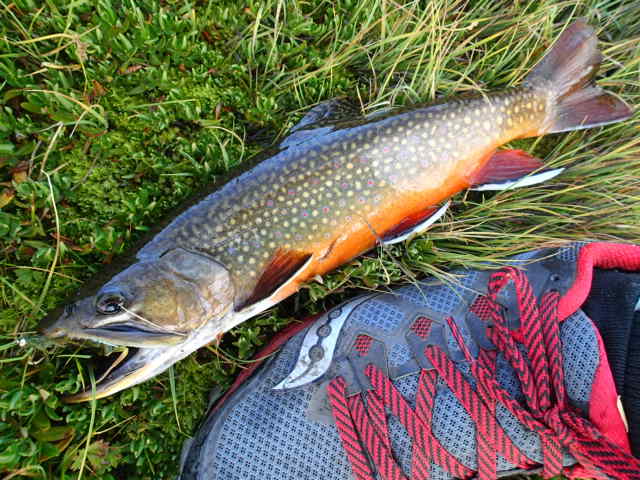 After a fantastic brook trout taco breakfast, we headed to Clouds Rest. Concerned that water could be somewhat scarce on this route we all filled all of our containers. As it turned out, there were viable water sources all day long. Clouds Rest coming into view was stunning, as was the view from CR itself. 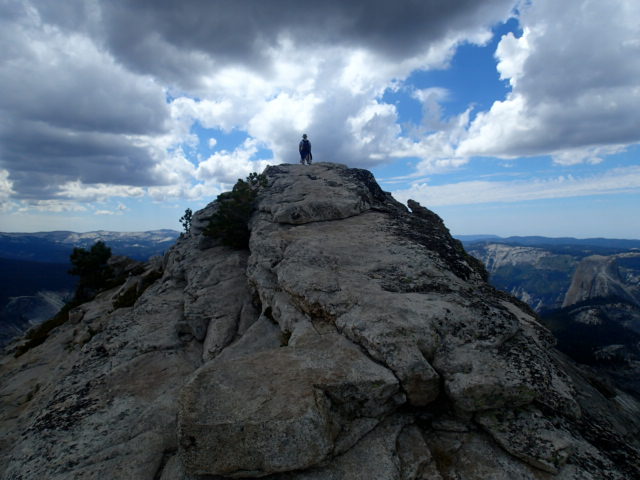 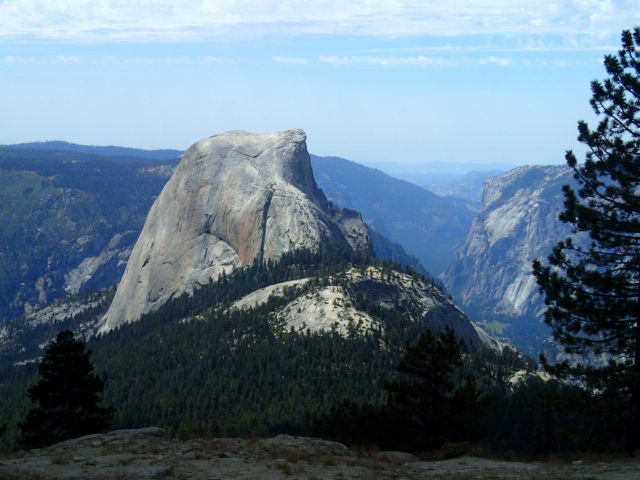 The trip down to JMT was long and steep and quite busy with other hikers, and we were able to find an unclaimed fire ring at the JMT junction. There were many other campers at the junction, and we shared the campground with another hiker. She was just starting a full JMT hike and we wish her the best.

The fish were tiny in the nearby Sunrise Creek. After I launched the first two small rainbows into the air when I set the hook, I stopped fishing the creek.

After a hearty dinner of freezedried chili, we fall asleep under the pines.

9/5 - JMT to the YARTS to Tuloumne Meadows CG

Our original plan was to climb Half Dome and stay a second night at our campsite. Then hike to the Village the next day and catch the 5PM YARTS bus to Tuolumne Meadows where the truck was parked. However, none of us really wanted to kick around the same campground for another day/night, and the views from Clouds Rest the day before were so spectacular, we decided to skip Half Dome and hike straight to the Valley and get on the YARTS bus.

As we dropped down the trail to the Little Yosemite Valley we passed and said hi to many hikers doing day-trips to Half Dome. Oddly, it seemed, a Ranger who was climbing the trail would not stop for a question I had as we passed. My buddy and I were a little surprised, but then surmised that something serious was going on; maybe someone had died. A few days later we learned that a hiker from AZ had fallen on Half Dome that morning and was killed. Very sad.

Anyway, we hiked and fished our way down to the Valley. It was shocking how many other daytrippers were on this trail. All very pleasant, just very numerous. Considering the beauty of the waterfalls, it was understandable. 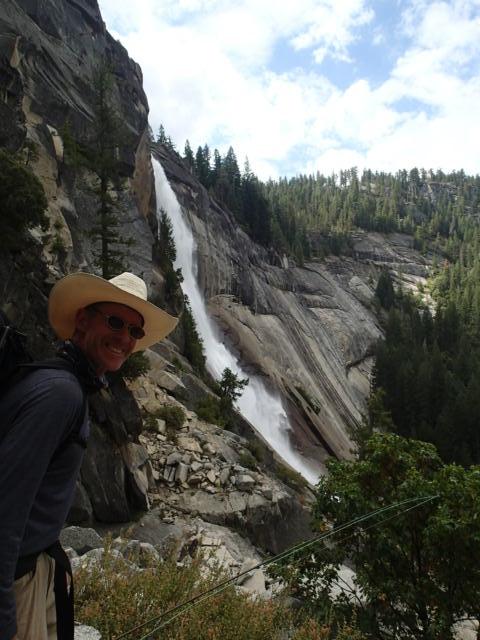 We got to the small restaurant behind the Valley Store at around 2:30PM, and enjoyed some burgers and beers. After we got on the bus though, we discovered that there was a bad accident somewhere on Tioga Rd which had closed down the road to all traffic. So after our bus got past the bumper to bumper traffic in the Valley and the closed turn off to Tioga Rd, it continued on and stopped at a gas station outside the park and let us all out, the driver saying it would be an hour to an hour and a half before Tioga Rd would be open.

As we were parked right next to the Merced River, my buddy and I asked the driver if it was OK if we fished. He said sure, he'd make sure to get us, so we climbed down the steep riprap to the river. My buddy took the nice pool there and I quickly headed upstream.

Because I was heading away from the bus I kept looking back toward the gas station just to keep an eye on things. And, sure enough, 20 minutes into the "hour to an hour and a half" I saw the bus start to move. So I scrambled up to the road and ran about 1/2 mile back to the bus, where everyone on the bus was watching me and clapping and cheering.

No fish, but at least I didn't have to hitchhike to TMCG!

We got to TMCG well after dark and got rained on that night, but no one cared. Shared a campfire at TMCG with a guy who had run/hiked from the Valley to TMCG that day. Around 25 miles. As he was meeting a buddy at TMCG he only carried a small day pack, but still, quite impressive.

Great TR and thanks for sharing. Nice fishing and great views form Clouds rest seem to compensate for the logistical hazards of a crowded Yosemite park.
Top

That brookie is quite a beauty!
“Those who desire to give up freedom in order to gain security will not have either one.”

What fun! Thanks for posting this...
Balzaccom

I like the photo of the reflected clouds in Sunrise Lake

thanks for the report
My trip reports: backpackandbeer.blogspot.com
Top

Thanks for the report! Way to take advantage of the unexpected delay at the end (and then not get stranded when the timeline shifted rapidly).
You can read a few backcountry reports here: http://wanderswithtrout.wordpress.com/
Top
Post Reply
6 posts • Page 1 of 1