I have been gradually resuming activities that I gave up due to family. Skiing was first and hiking was next. Thanks to all on this forum for your help as I used this forum (and another) as my primary resources to shorten the (re)learning curve.

I decided to baseline where I was at by doing a hike that I had done several times when I was young. I didn't remember it being particularly strenuous, but that allowed flexibility to extend, shorten or bail-out altogether depending on how I felt.


Wednesday: I drove up from LA at mid-day and was able to pickup my permit and bear canister from the Lone Pine Visitor Center with an hour to spare. It was 97 in Lone Pine at 5PM! My plan was to have a nice dinner in Lone Pine, then head up to the trailhead at 10,100 feet to camp out and acclimate. I brought along a 02 pulse oximeter and a heart rate monitor to see how well my body was responding to the altitude. 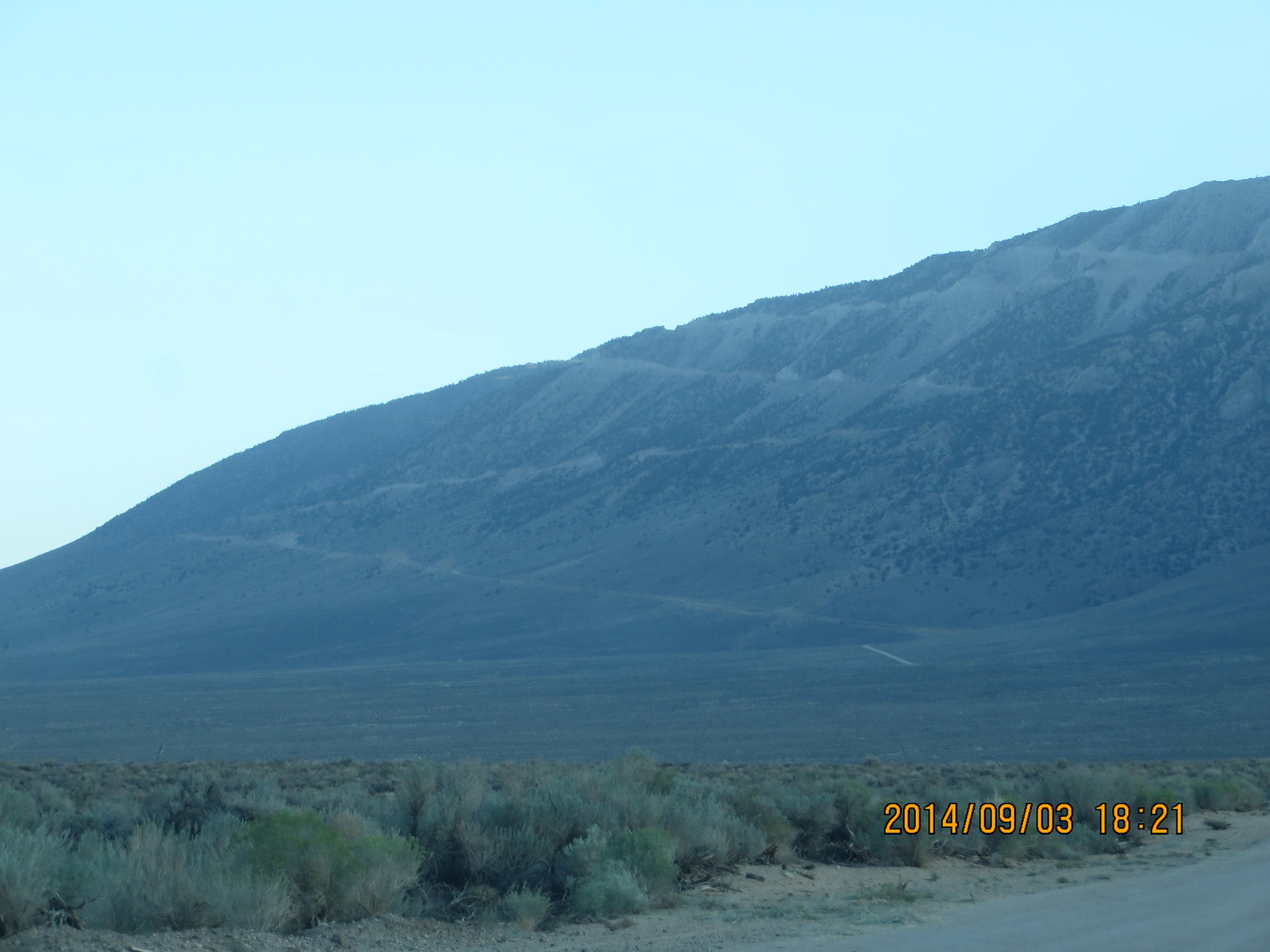 When I got to the trailhead, the temperature had dropped into the high 50s, and I could really feel the thin air. I checked out the trailhead & bear boxes, and found a quiet spot to setup camp near my car. I kept an eye on my O2 Sat and Heart Rate while I went about setting up camp. HR was up and O2 Sat was down. What a shock! Between that and the excitement, I struggled to get to sleep.


Thursday: When I got up at sunrise, my O2 Sat and HR numbers were almost normal. I got packed up and moving on the trail by 7am. Between the altitude challenge and over-packing, I lumbered under the weight of my pack. After getting warmed after the first 30 minutes on the trail, I settled in and didn't really notice the weight. 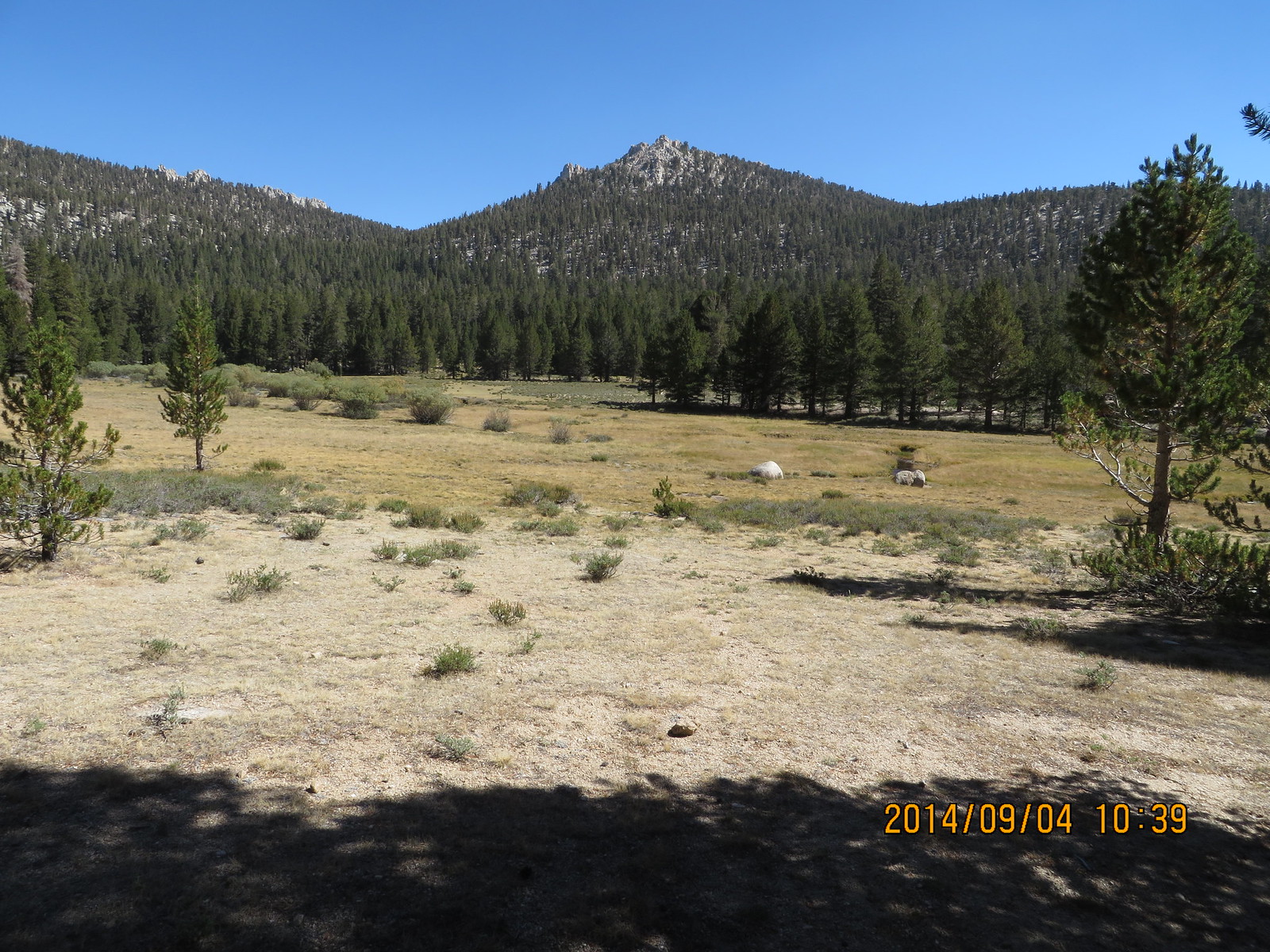 I had previously decided to go up New Army Pass and down Old Army Pass, so I would take the South Fork Lakes fork of the trail. 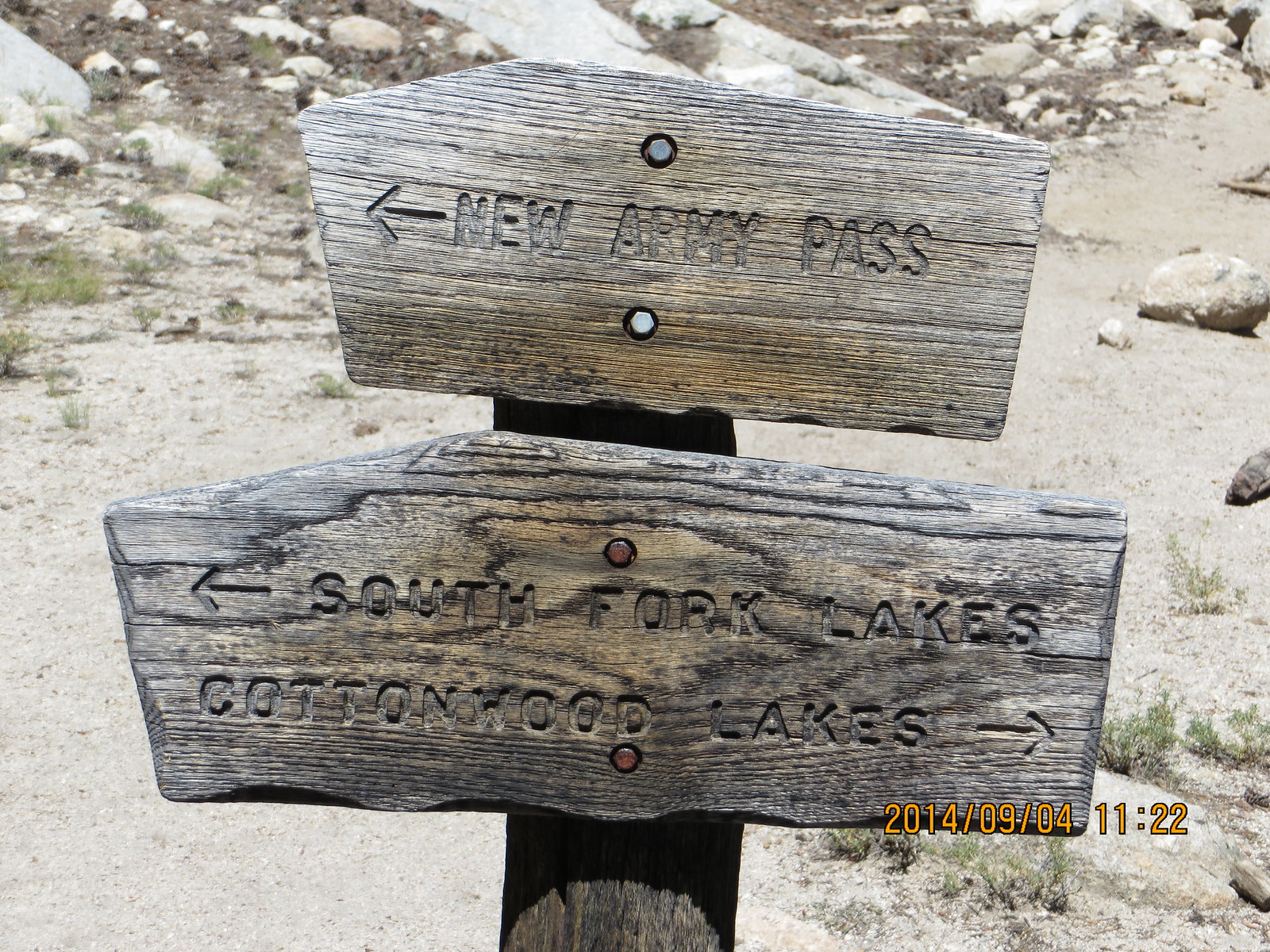 A fork in the road

The climb up from the fork to Lake #1 was tough on this old body, necessitating several rests, but that view when you round the large rock at the top is breathtaking. That I remembered, but the pictures don't do it justice. 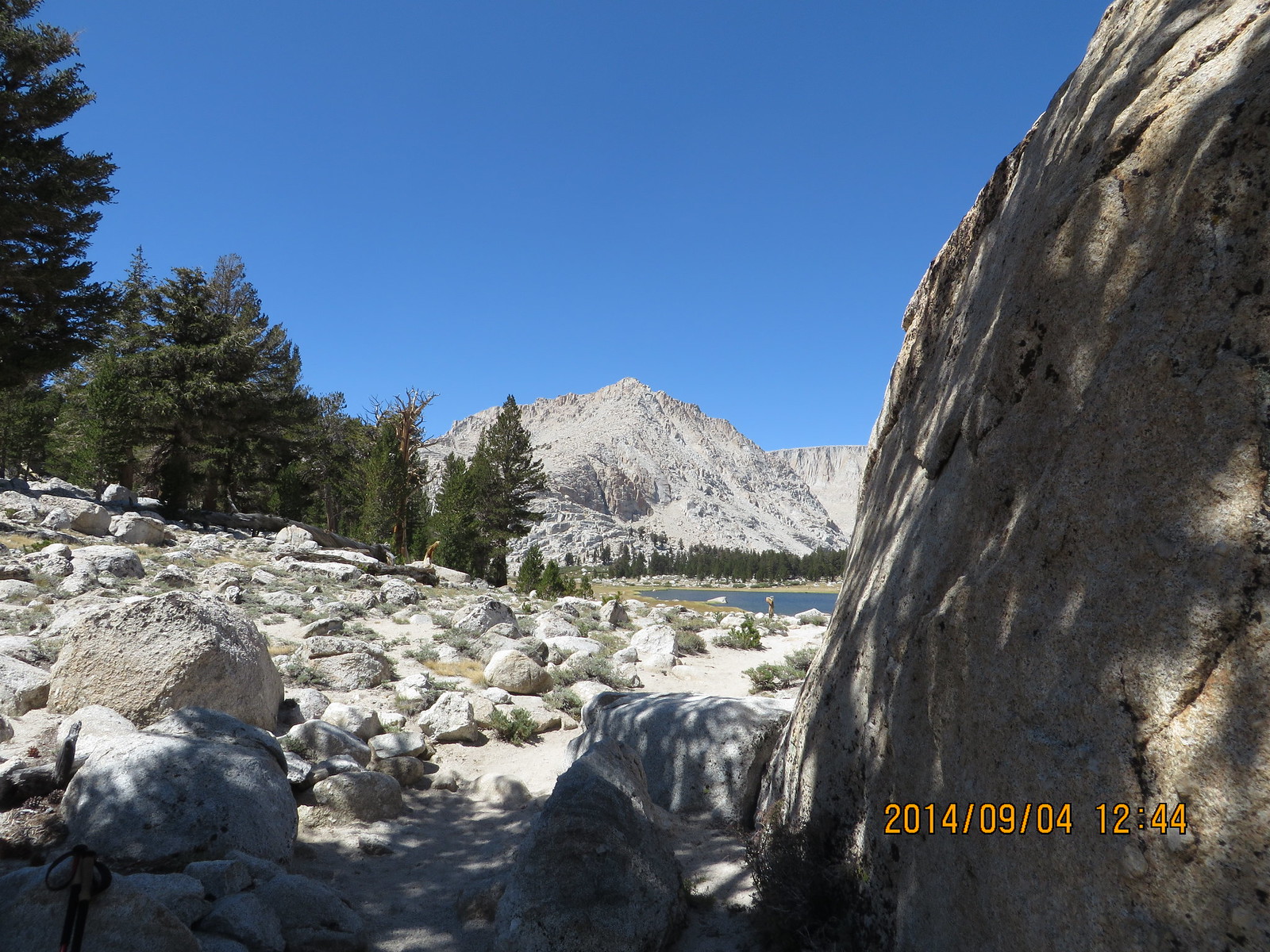 Coming around the rock... 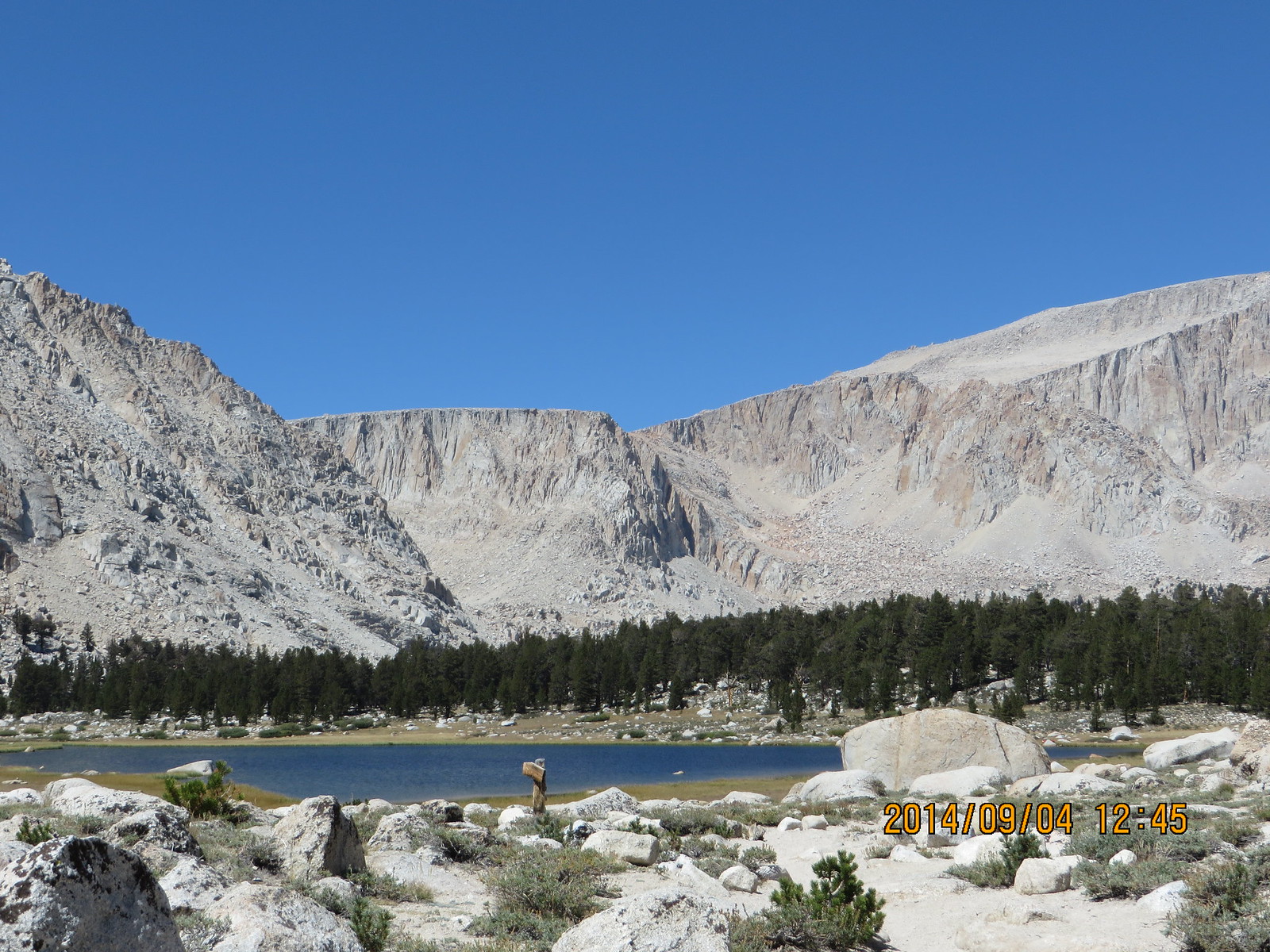 The view is breathtaking!

A nice flat trail beside Lakes 1 and 2 turned into the mess that is a boulder lake where there used to be a lake/tarn. Other than the slow going over this section of trail, there is still nice scenery. 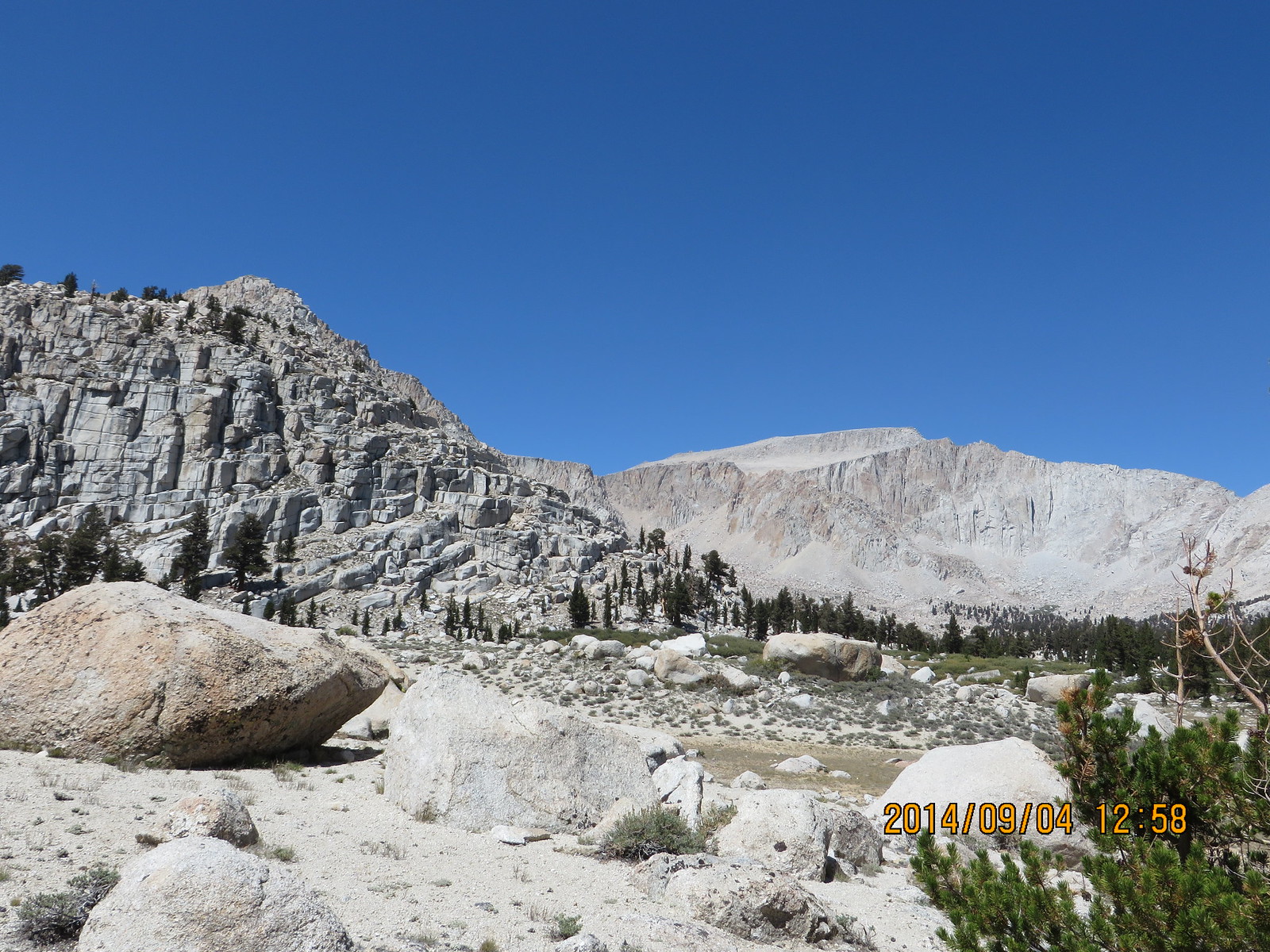 Mt Langley in the distance 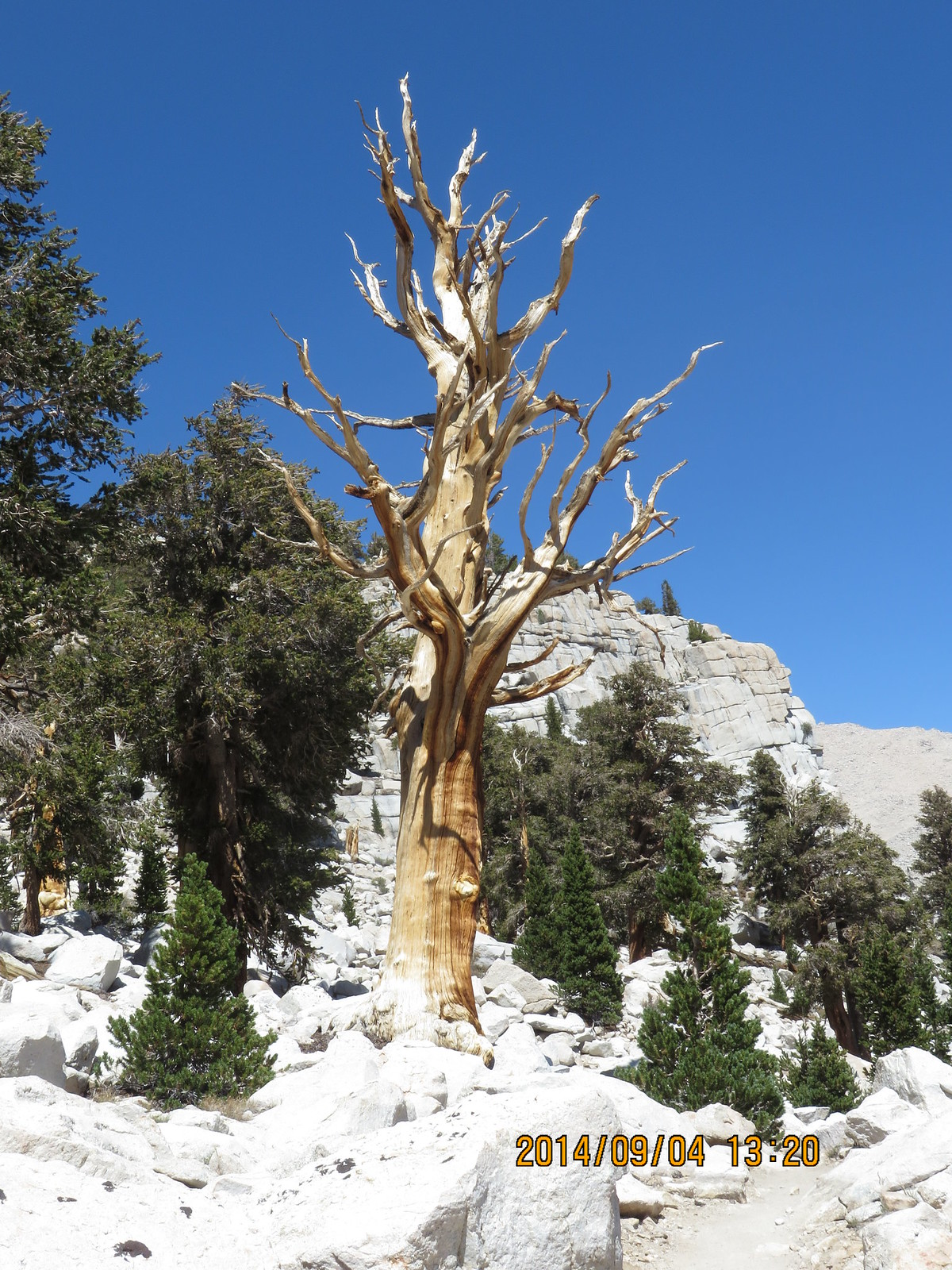 I finally made it the the turnoff for the highest South Fork lake. I was planning on camping there, but there were several groups already there. I had lunch and filtered a little water before heading for Long Lake. 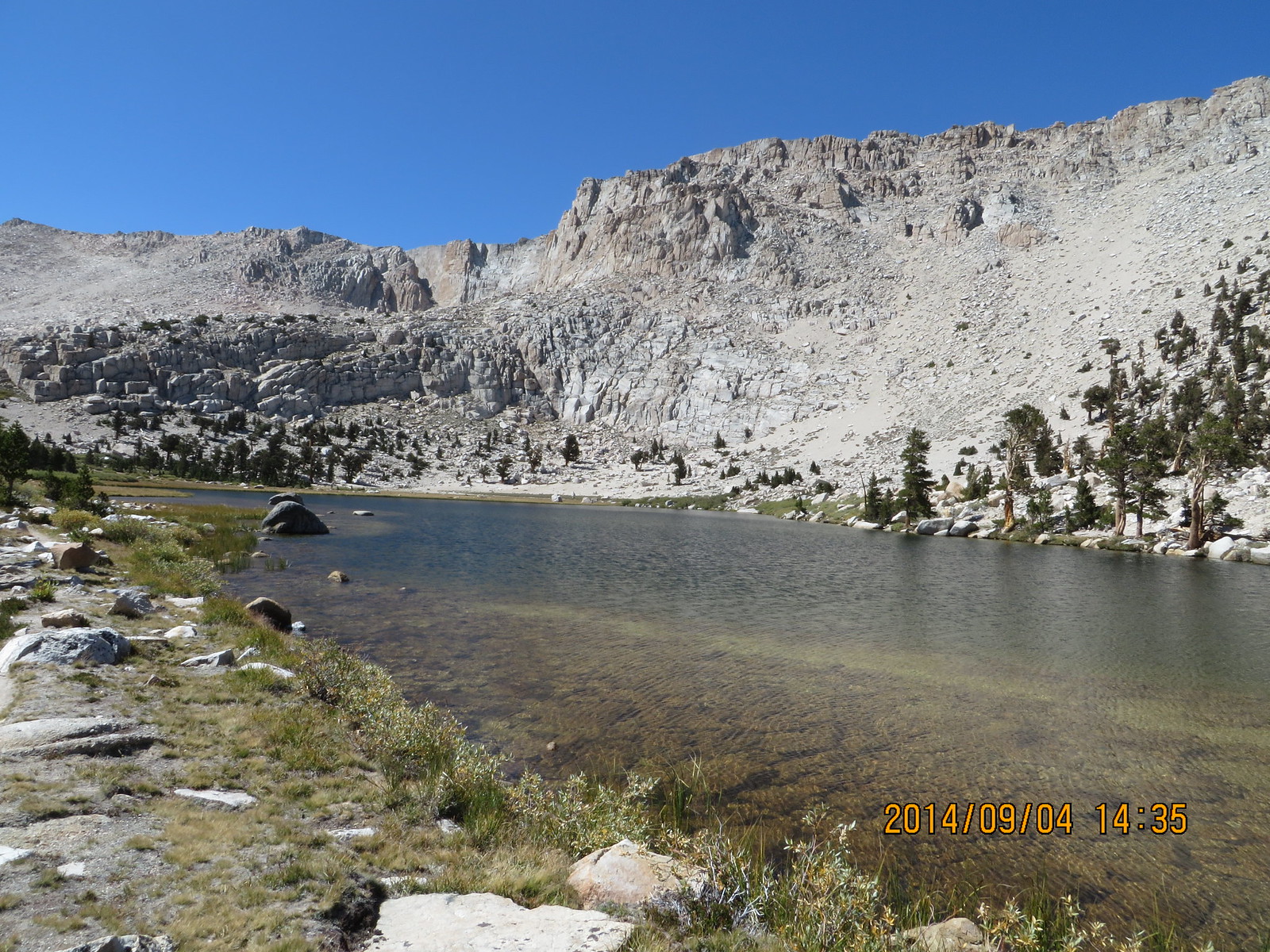 Long Lake with New Army Pass in the background

Same story at Long Lake with regards to several groups beating me to the best camp sites (SW side in the trees near the inlet). I debated between going around to the north side of the lake, or heading up to High Lake. The problem is there are only two sites at High Lake, one of which is marginally legal. If those are taken, I may have a problem! I decided to press on for the opportunity for some solitude. 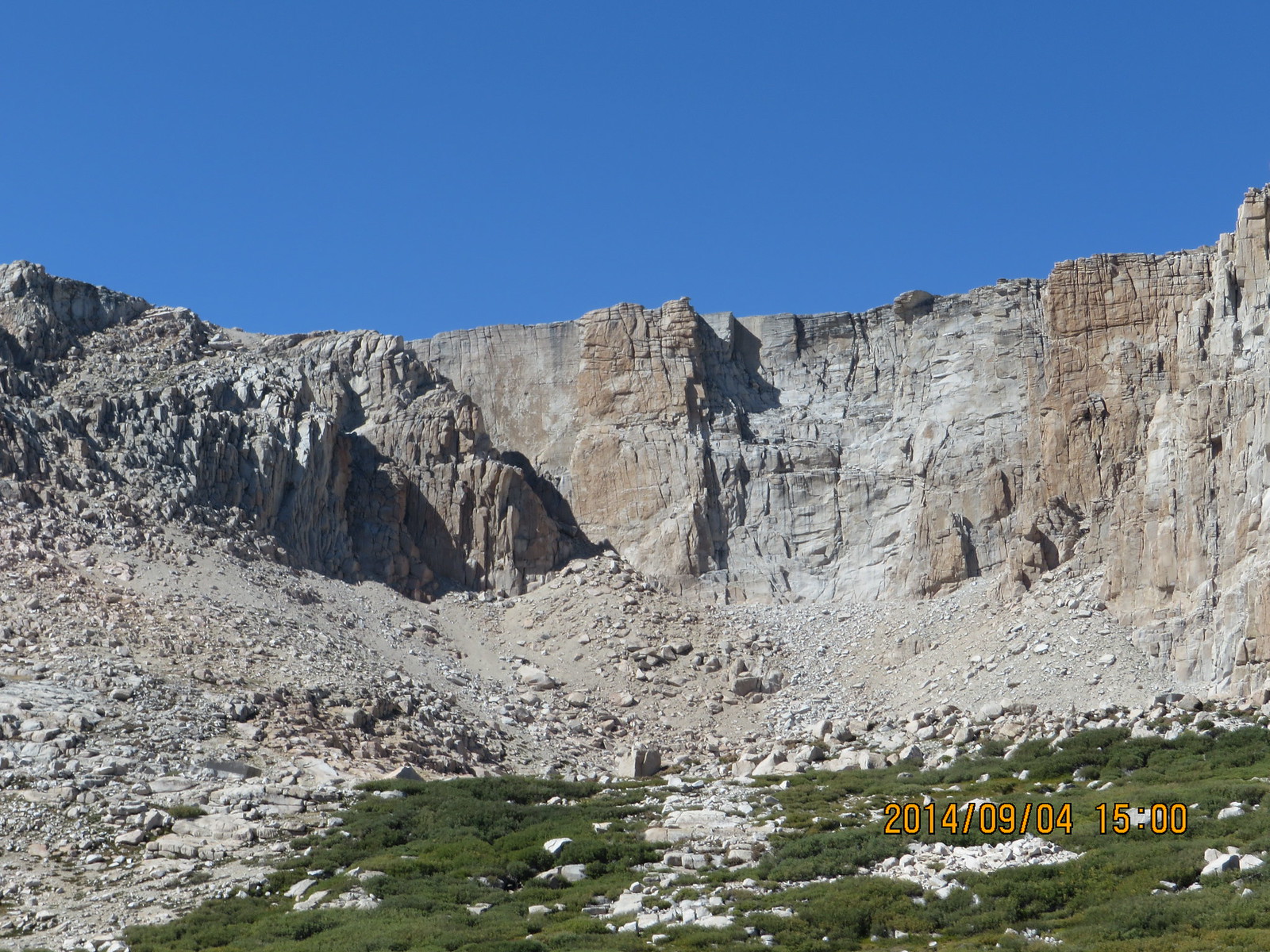 High Lake from below 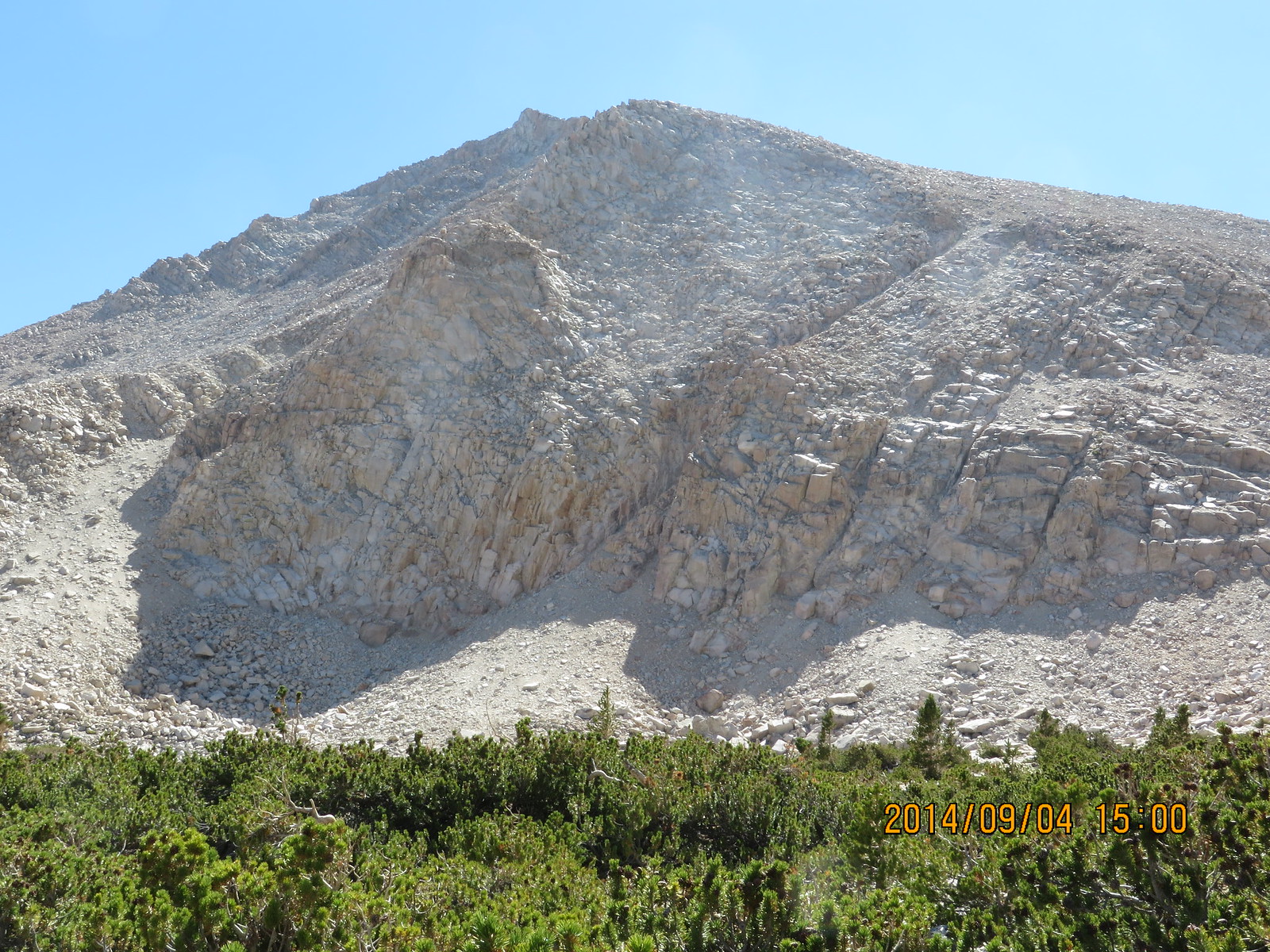 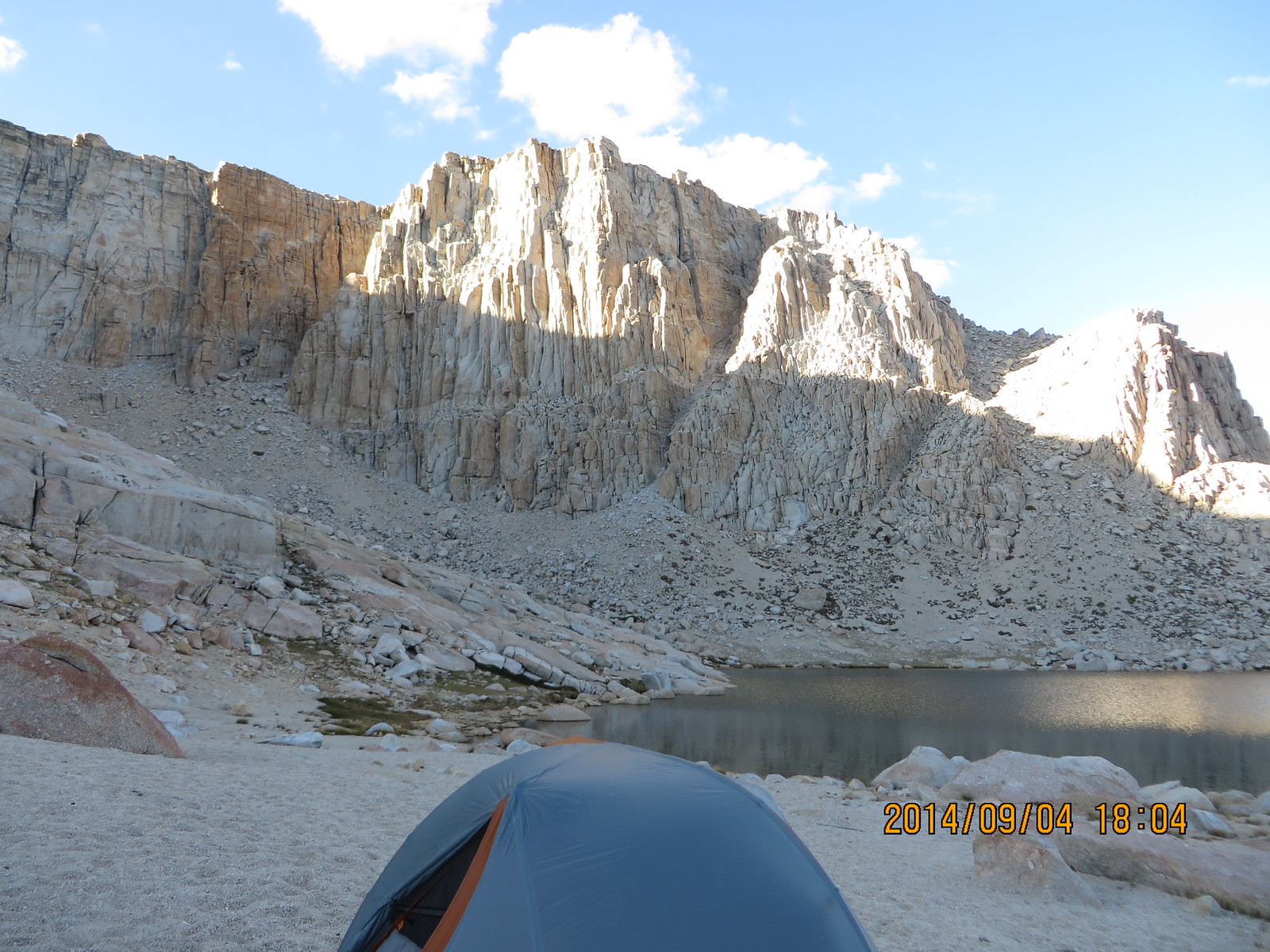 I ended up all alone at High Lake. Nice and cool with a sandy spot to cushion my old body. Once I got all the domestic tasks done, I was horizontal and out like a light. Slept really soundly for the first 4 hours, then the winds woke me. After sleeping fitfully the rest of the night, I decided I needed a thicker inflatable!

This is a report from last fall. The forum is a little slow this time of the week, so I thought I would do my part. For those of you who are in the backcountry right now instead of at work like me: @#%$ *&^!

I had the date code on my pictures. That has since been fixed.
Top

Nice trip report and welcome back to the world of backpacking.

In regards to sleeping mats. I have upgraded to using two mats. One layer is an adult foam mat and then on top of that goes a kids REI inflatable mat. Very comfortable and relatively lightweight. The inflatable stays in the tent so that it does not get popped while the foam mat can be used around a camp fire or pine needle infused camp without worry.
Top

Friday: I woke early and puttered around having several cups of that nasty instant coffee. Got packed up and hit New Army pass. Slow progress up, but really enjoyed the views at various points along the trail. That's what I like about climbs above the treeline: an infinite places to take photos, admire the view, and rest. 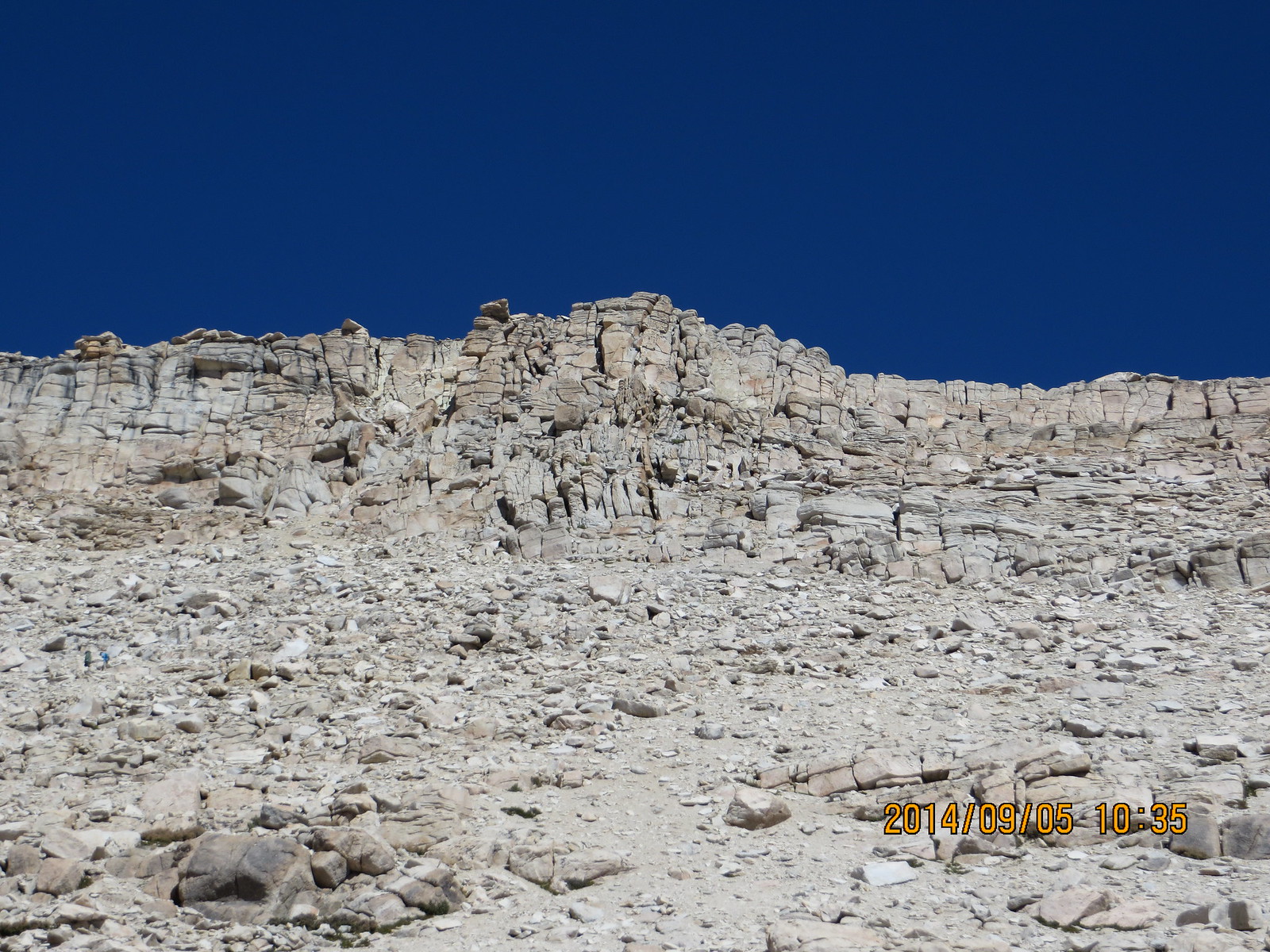 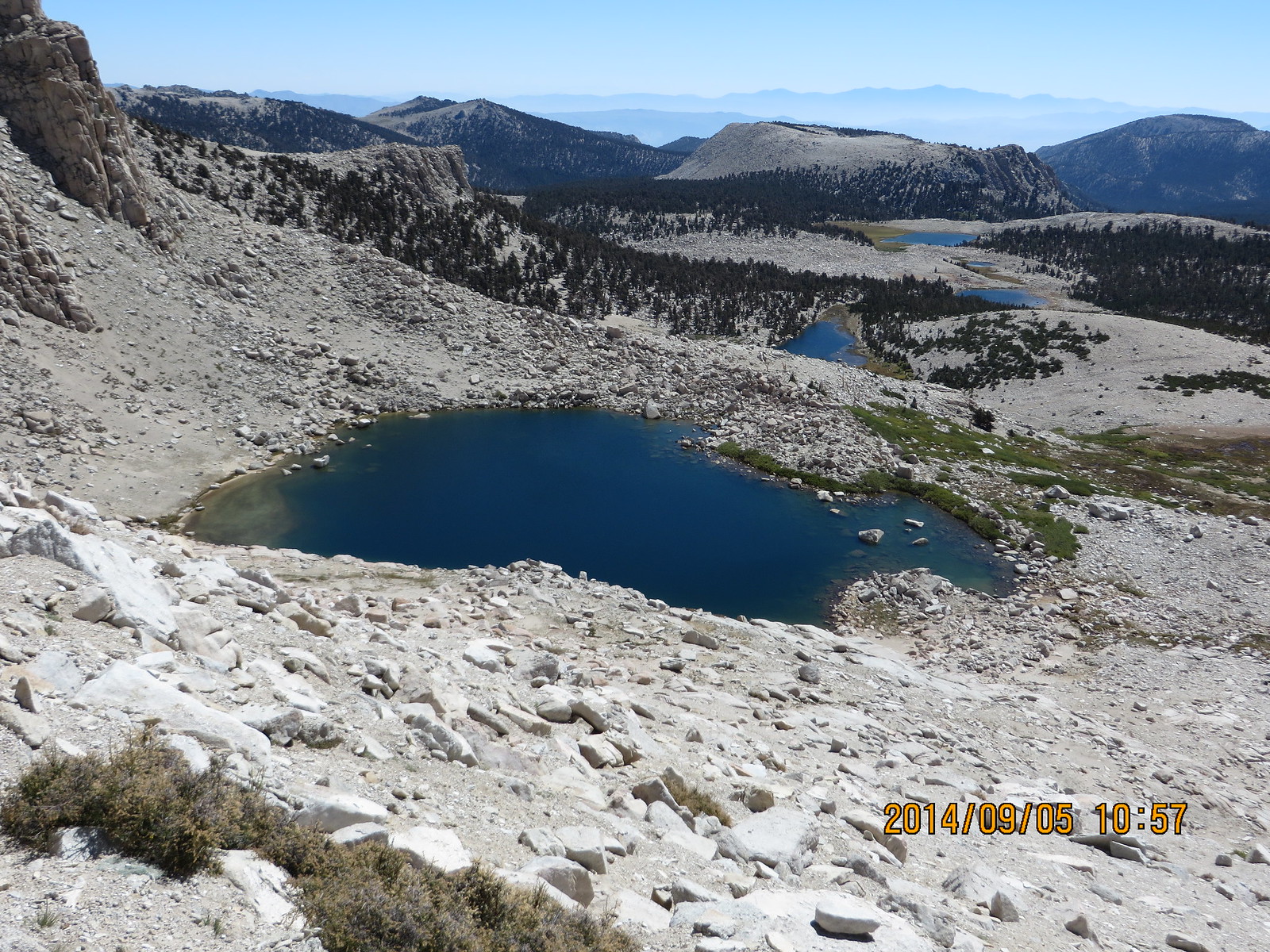 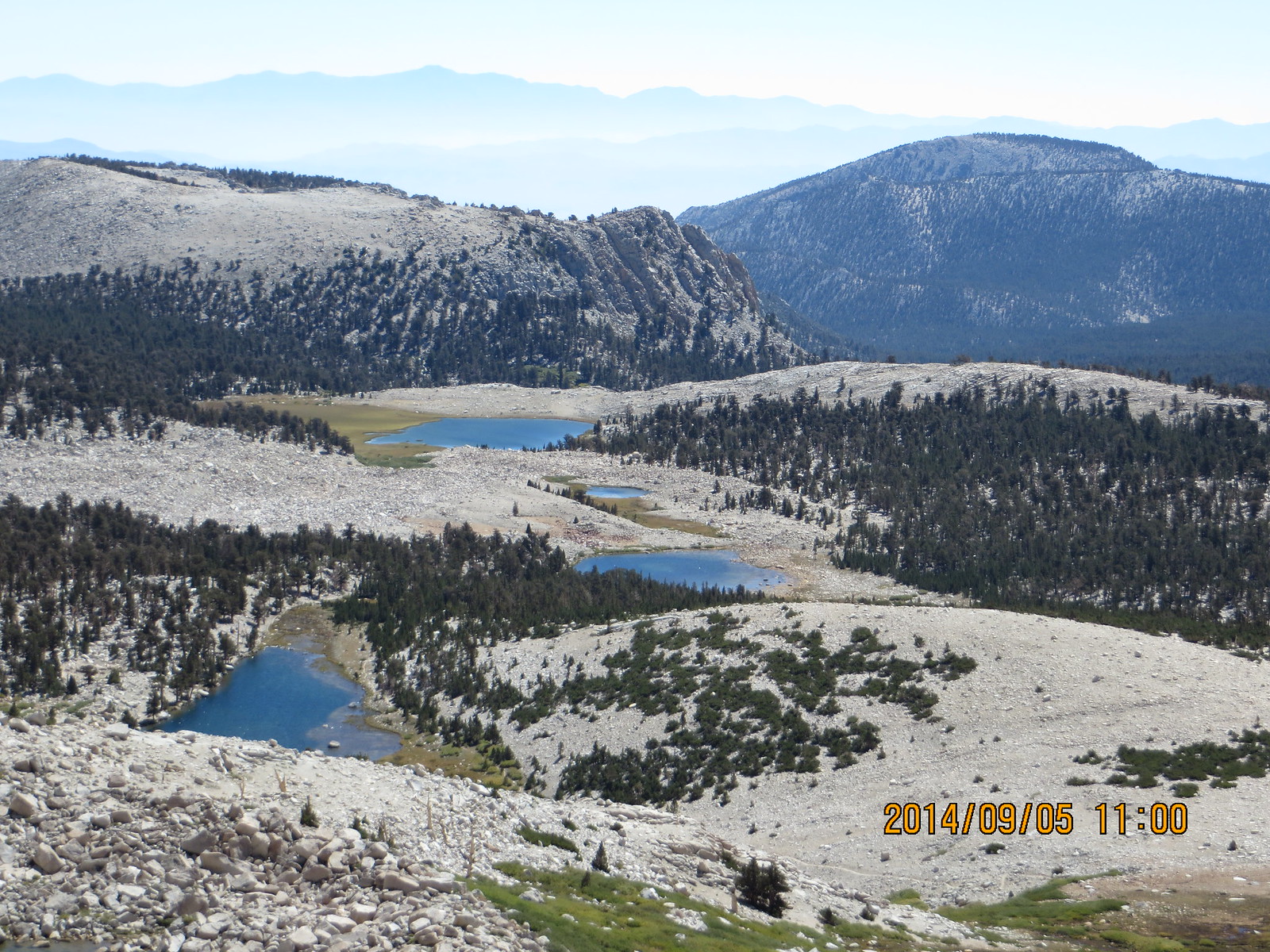 Long Lake and South Fork Lakes from higher up the pass 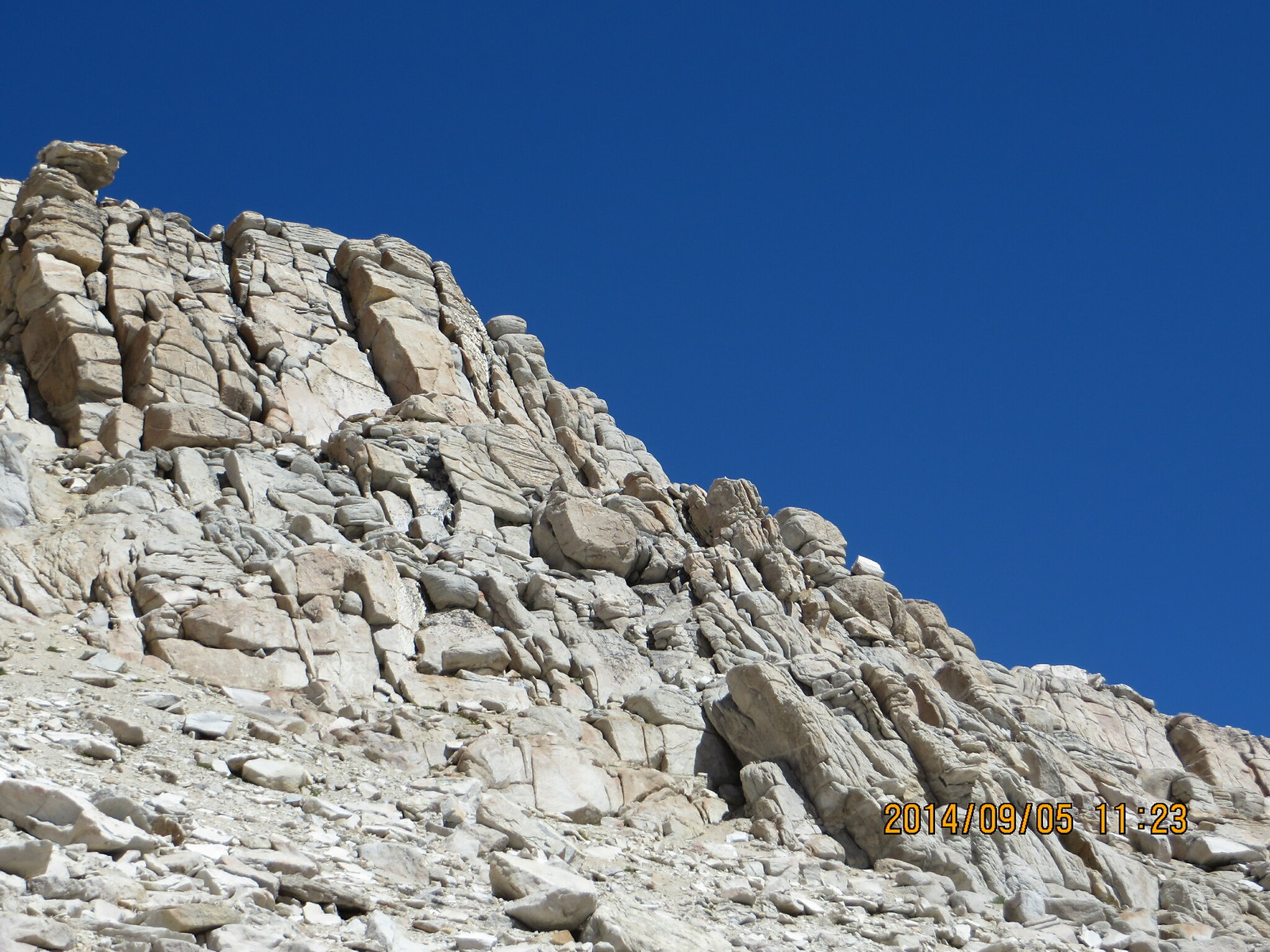 The upper part of NAP 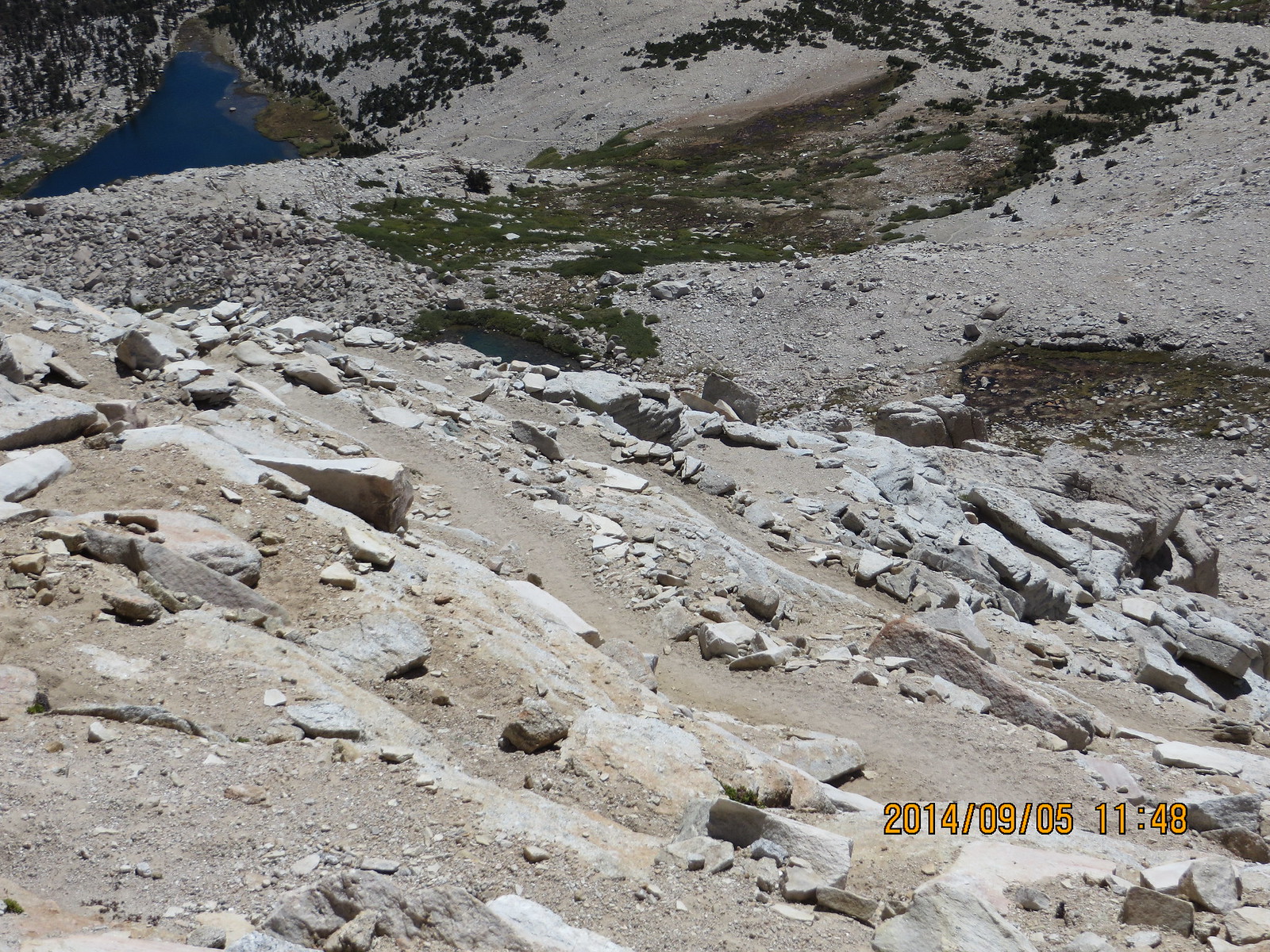 That's a lot of switchbacks! 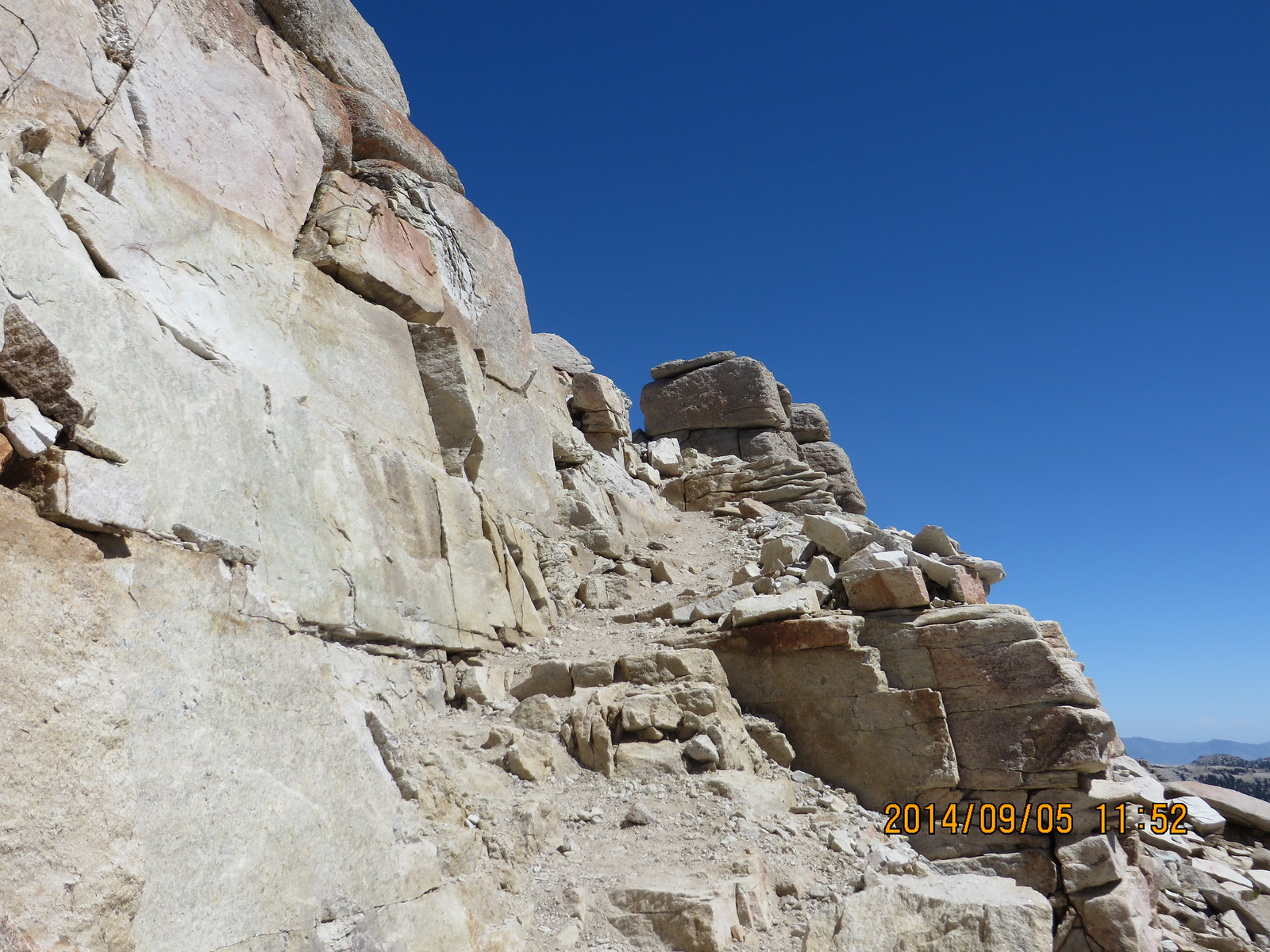 The final steps to the top

Sometimes it's just easier to let the pictures tell the story! 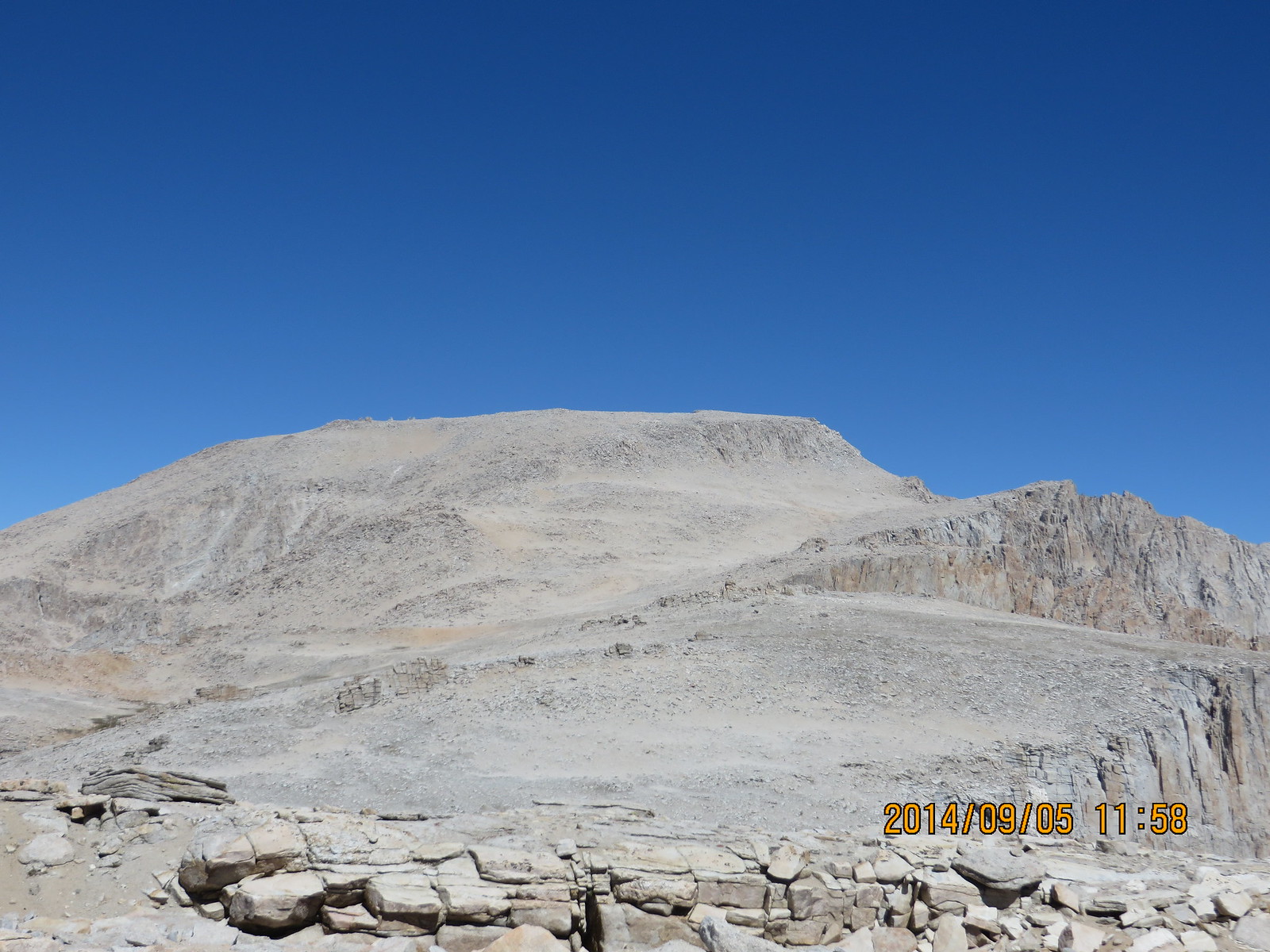 Mt Langley from the top of New Army Pass 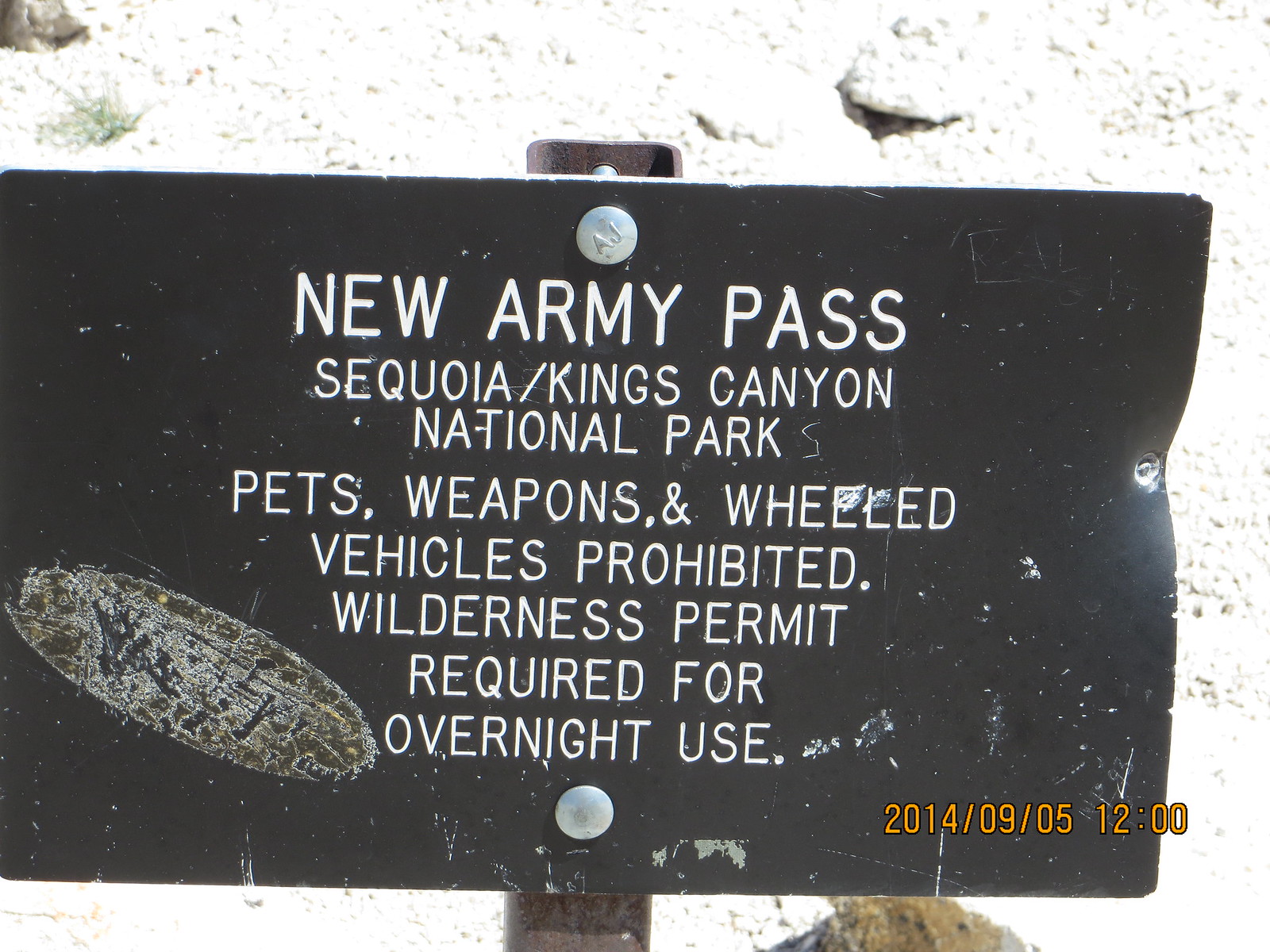 Stopped at this time to have a snack and enjoy some new views. It's always nice to take the pack off, especially this heavy beast. I need to put some thought into getting lighter. Both the pack... and me. 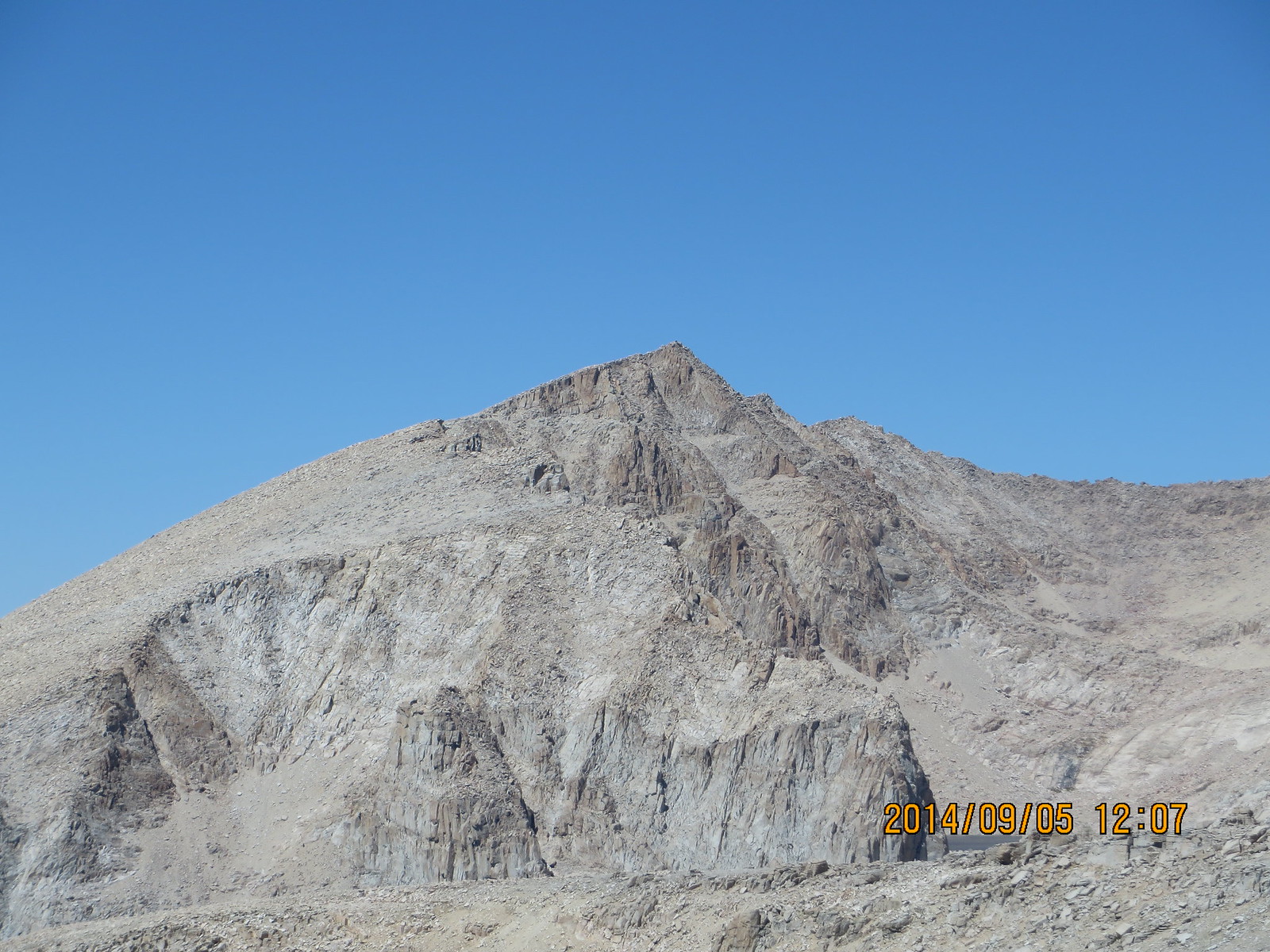 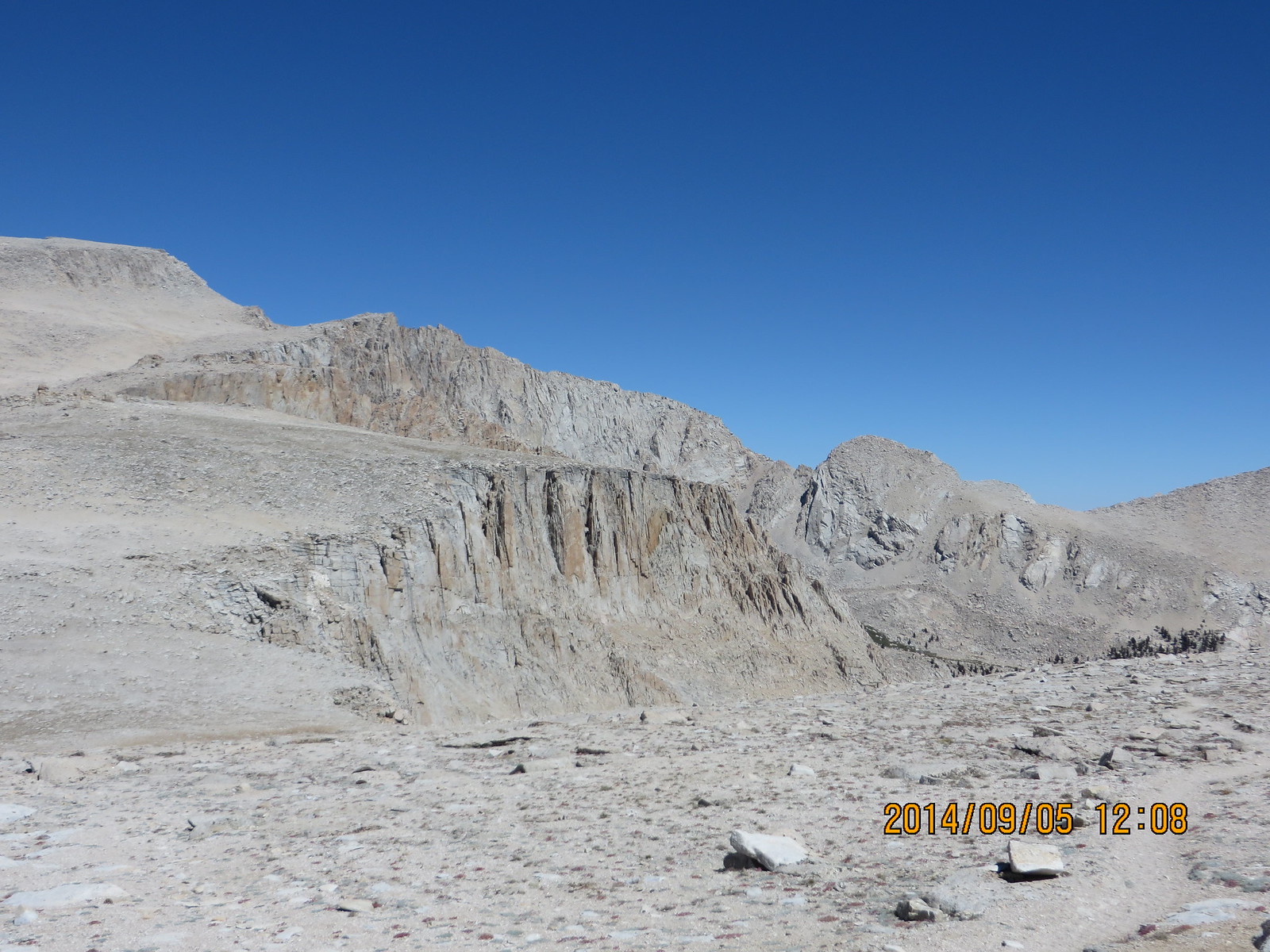 After my break, it was time to start thinking about whether I would head for Soldier Lake, or head back. I think I'll declare victory and head back to a nice motel mattress. Maybe my own mattress if I make good time. So I headed for Old Army Pass. 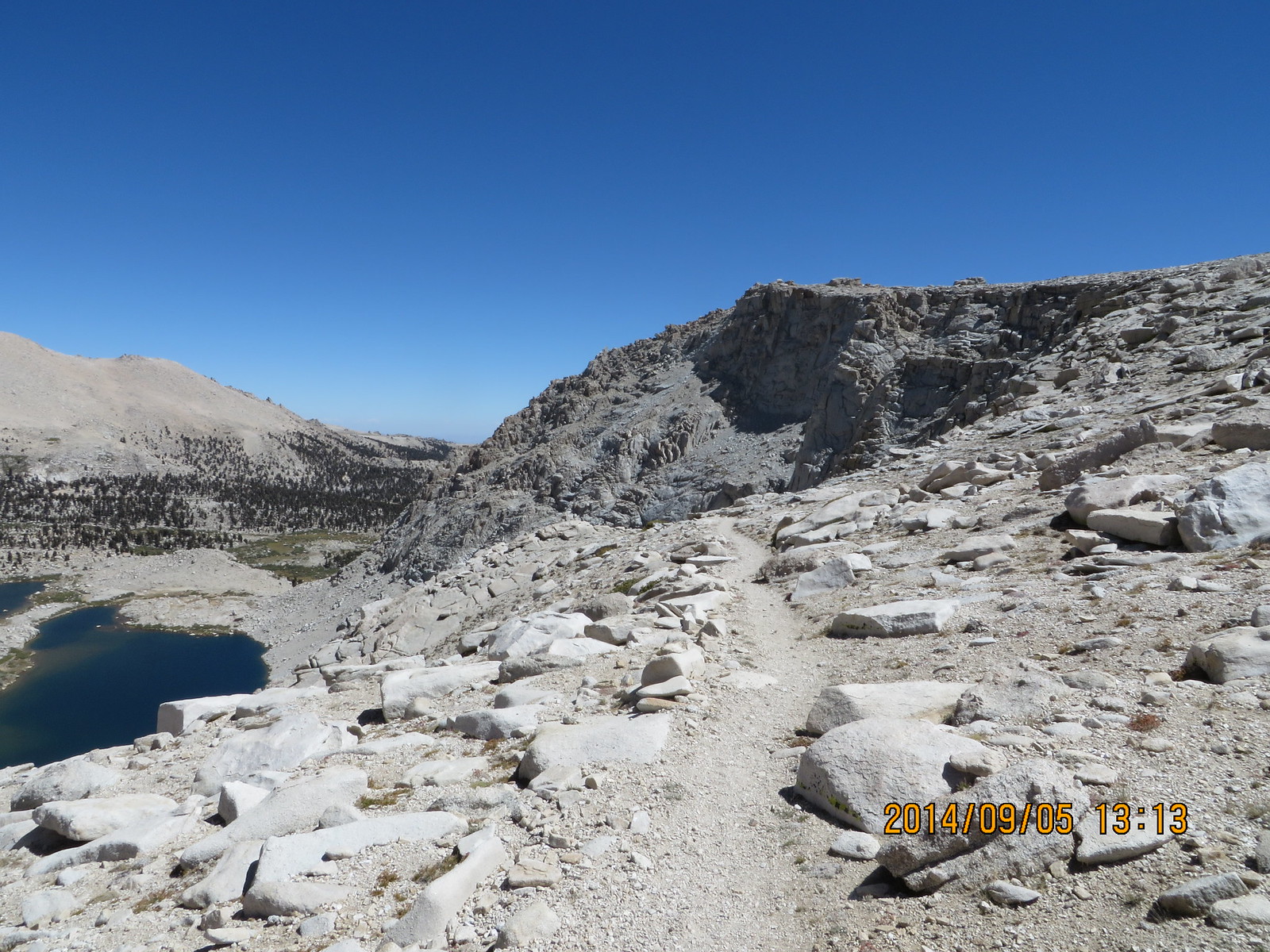 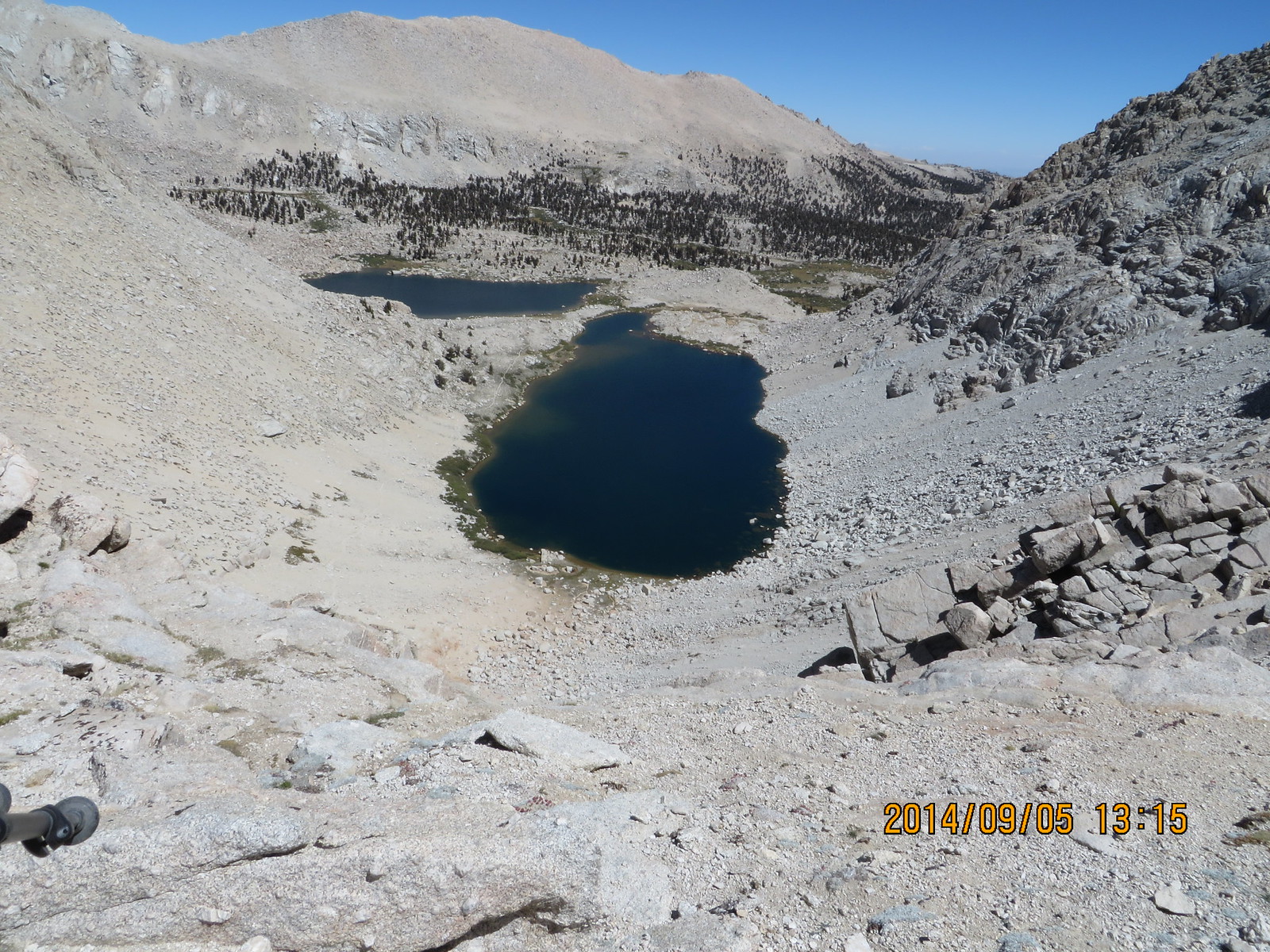 Lake#5 with #6 in the background

I actually really enjoyed the slow climb down OAP. The slide part was easy to climb around, and I always thought the path between cliff bands was an engineering marvel. All too soon I was at the bottom trying to get good pictures up at the trail. 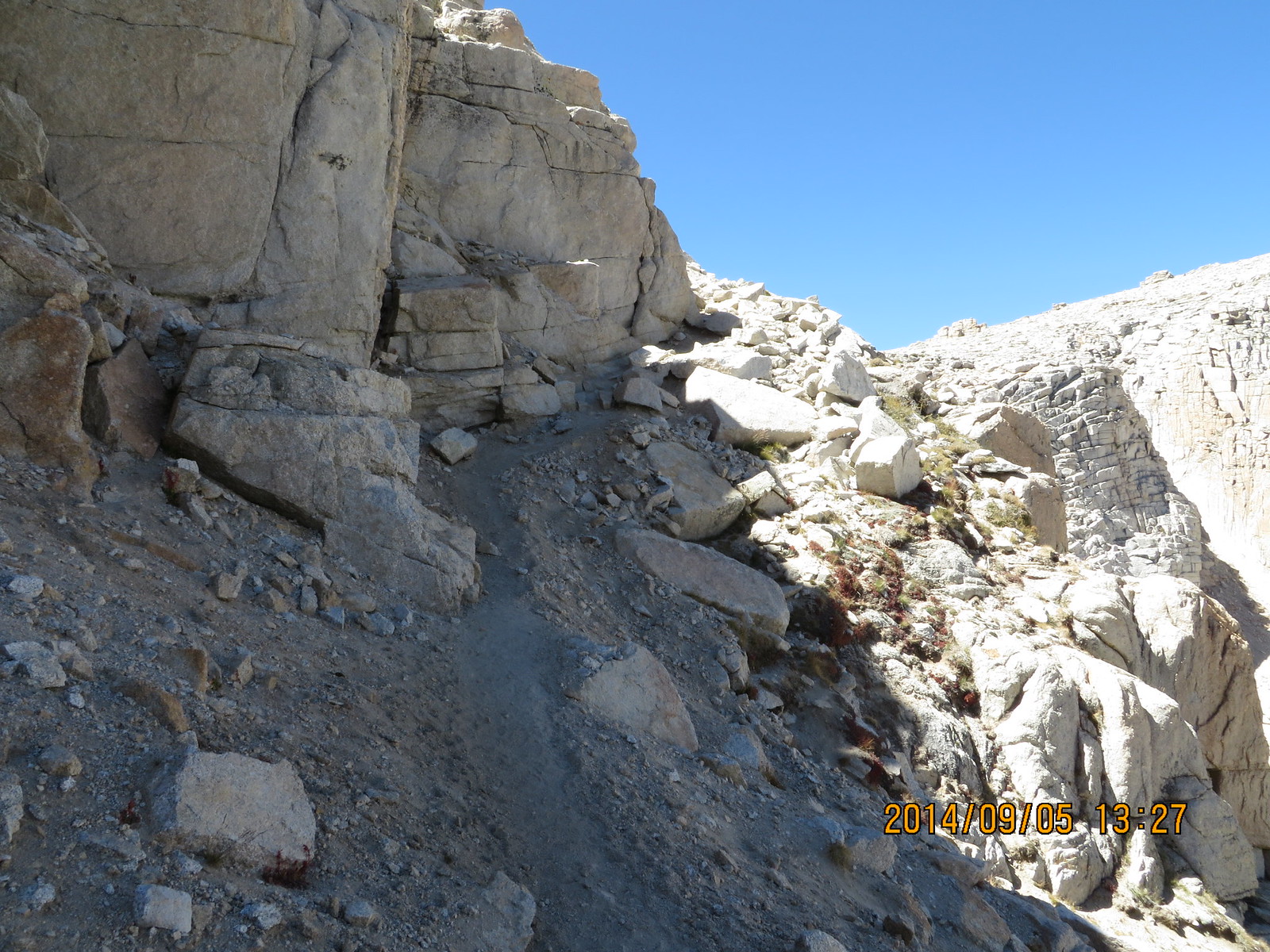 The path down OAP from the slide 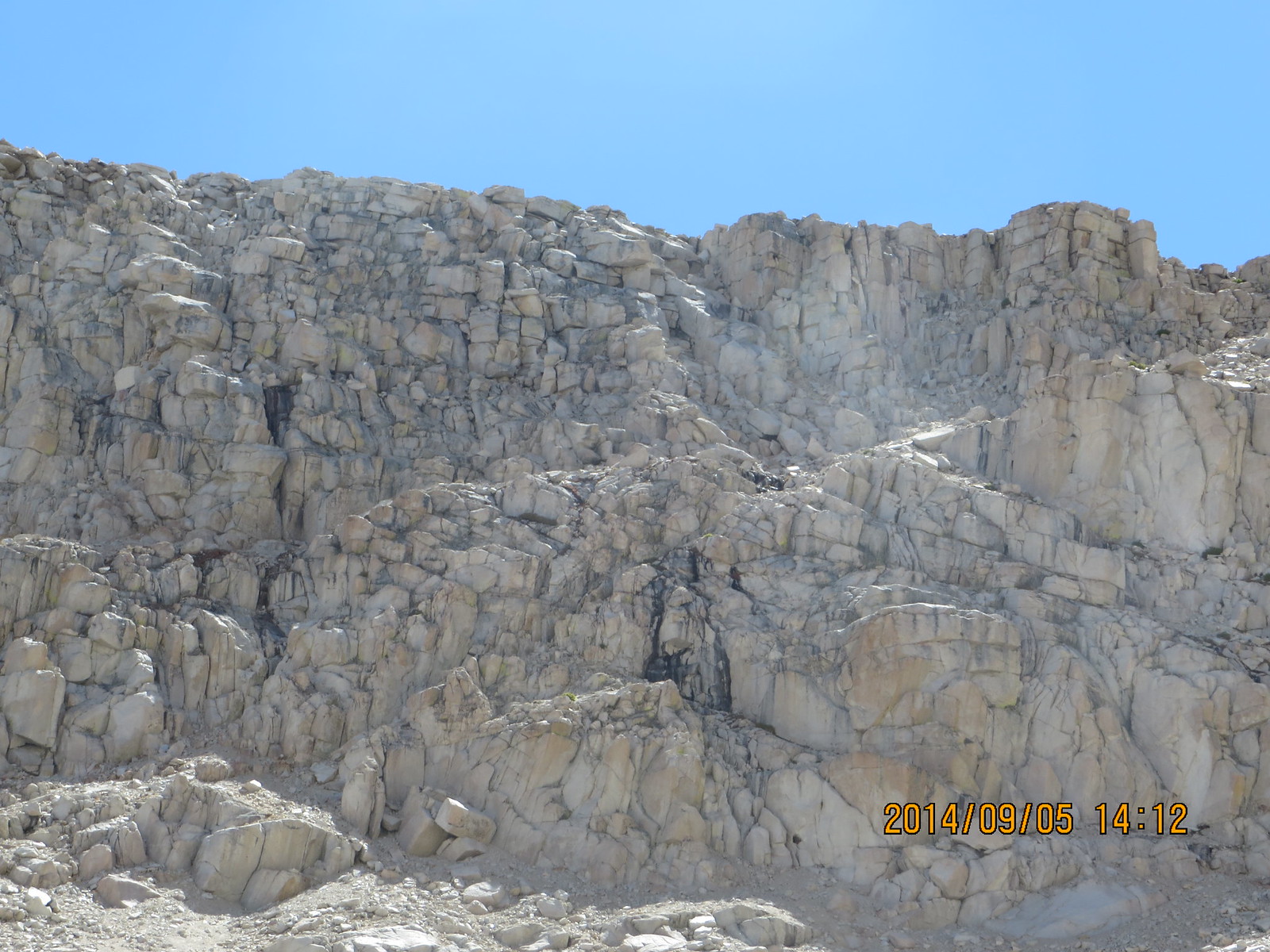 A nice view of the trail passing between cliff bands 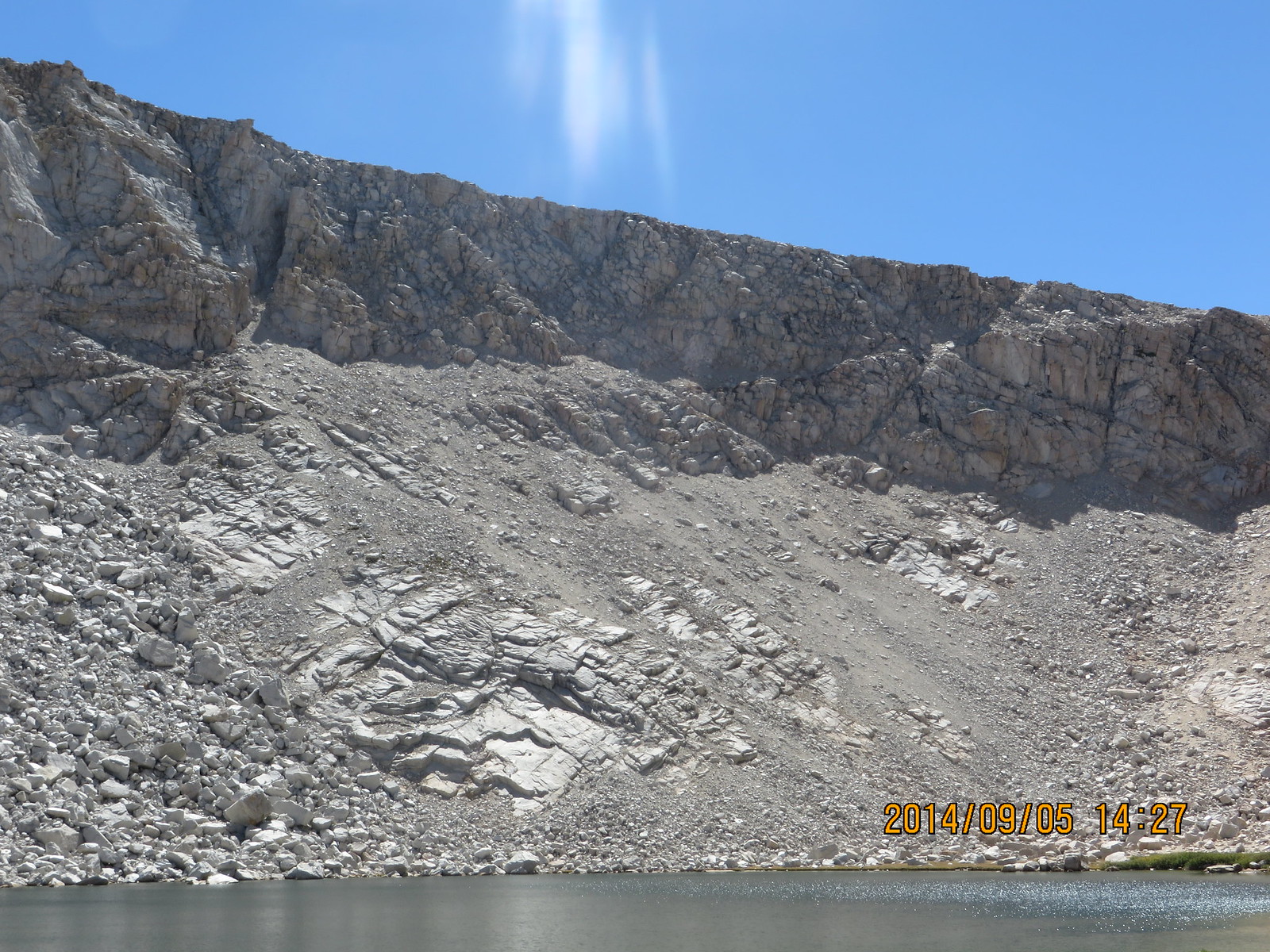 The best view of OAP from Cottonwood Lake #5

From the bottom of the pass it was mostly forest trails back to the trailhead. There was one last good view to Mt Langley from the meadow at Lake#3. 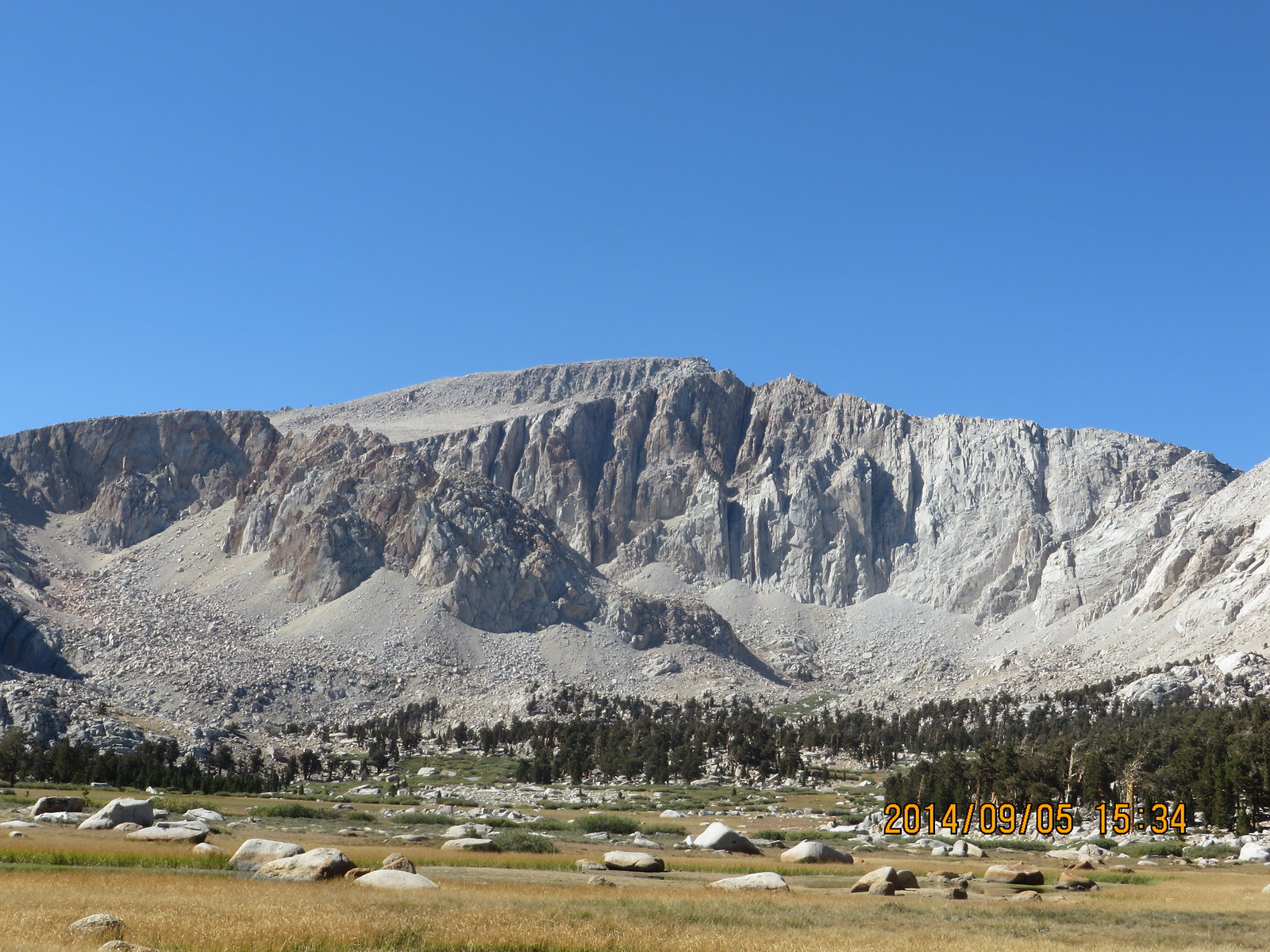 My memories of the last 5 miles are of an endless descent, long flat trail and my aching feet.

There was one other bizarre encounter on the way back. There was a large group of HS or college age kids coming up the trail some of whom were trim, fit and properly equipped. The remainder were girls who looked like they raided a salvation army store for a bunch of "stuff". Most of it was haphazardly strapped to undersized daypacks. They had a look on their faces that did not promise a positive outcome for the guys!

All in all a successful resumption of my hiking hobby, though at the time I thought I cut it too short. I did promise the wife that I would be conservative in evaluating my capabilities, so I think it ended up being just right. I just started with an overly ambitious agenda!

My other conclusion is that I must have been in really great shape the last time I hiked that trail! Ah, to be young again!
Last edited by KingMouth on Thu Jun 25, 2015 1:27 pm, edited 1 time in total.
Top

BillyBobBurro wrote:Nice trip report and welcome back to the world of backpacking.

In regards to sleeping mats. I have upgraded to using two mats. One layer is an adult foam mat and then on top of that goes a kids REI inflatable mat. Very comfortable and relatively lightweight. The inflatable stays in the tent so that it does not get popped while the foam mat can be used around a camp fire or pine needle infused camp without worry.

For my trip 2 weeks ago, I was sporting a LW Exped Synmat UL7. I slept much better.
Top

Thanks for the wonderful trip report and pictures, love Sierra blue skies! Looks like it was great trip after 25 year hiatus from the Sierra, which is just way to loooooong.
Professional Sierra Landscape Photographer

thanks for the great report and pics!
welcome back to The Sierra.
Top

Thanks for the report. I've been thinking about doing this hike next weekend. I've been wanting to move beyond my usual hikes in the San Gabriels and with the San Gorgonio Wilderness closed due to the Lake Fire Cottonwood Lakes looked inviting. I was looking for information and was glad to see this report.

Hopefully this will be a good introduction to the Sierras.
Top

Welcome to HST! When you get some time, please write up an intro: viewtopic.php?f=1&t=9329
Professional Sierra Landscape Photographer