This past weekend my hiking buddy Jose and I decided we wanted to head up out of the front country and get in a hike with a little more elevation gain. Caltrans has had the Angeles Crest Highway closed between Islip Gap and Vincent Gap since a rockslide covered part of the road last September. About 2 weeks ago I heard that they had cleared the slide and the road was open to Dawson Saddle so that would be our launching off point for this hike.

The trail from Dawson Saddle climbs the ridge line and heads around the back side of Throop Peak to where it joins with the PCT. From there you continue down the PCT on the ridge line for the most of the hike until you come to the spur trail that leaves the PCT at its highest point in Los Angeles County and continues to the top of Mt. Baden-Powell, named in honor of the founder of the Scouting movement Lord Robert Baden-Powell.

Map of the area, and the track we took in green: 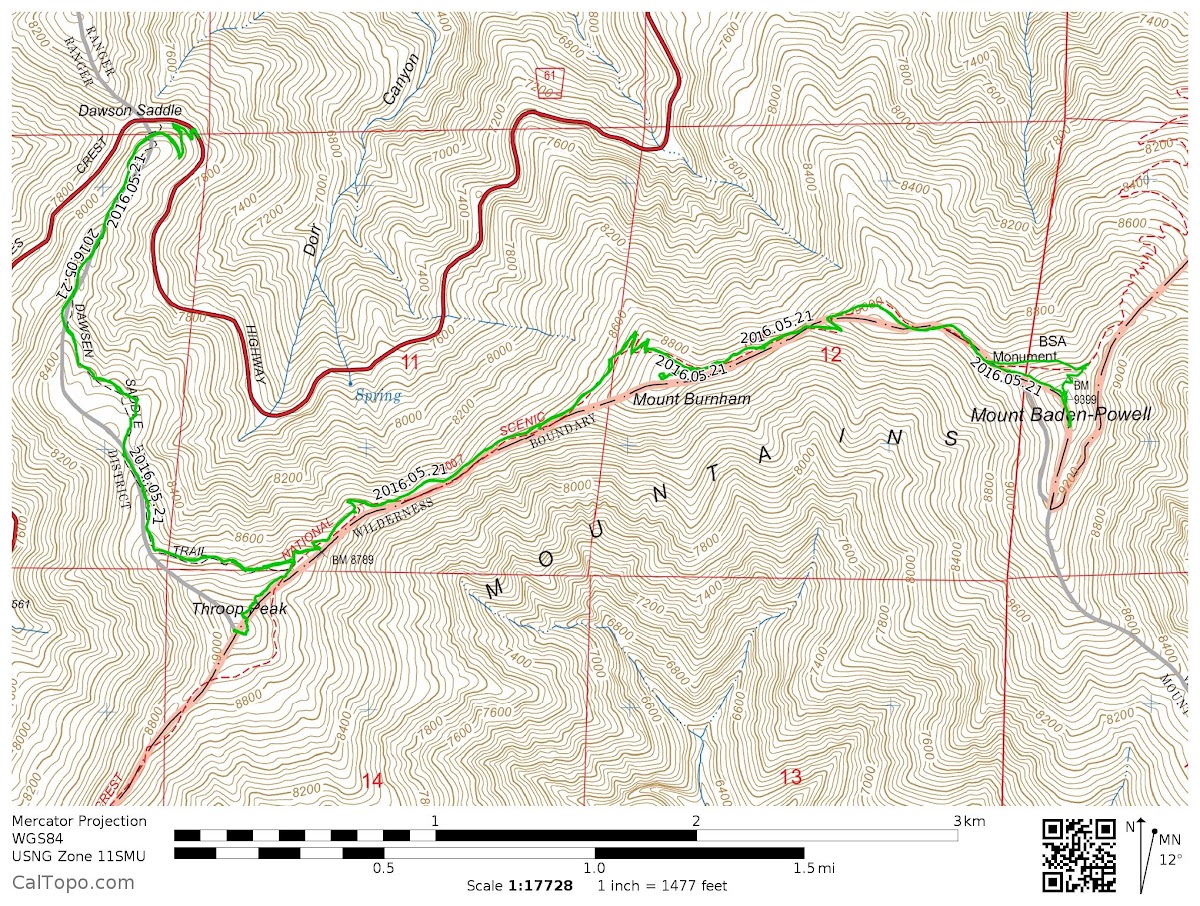 And the elevation profile of the hike: 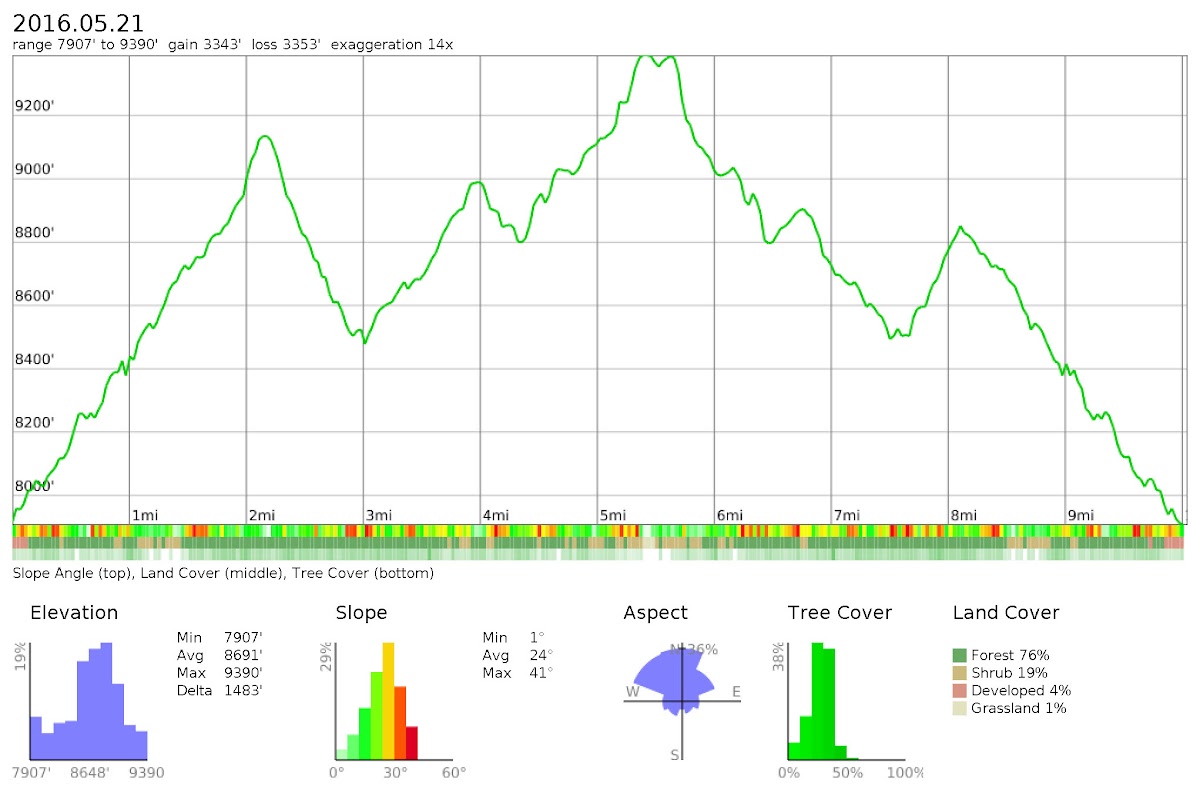 Jose and I met up in La Canada at a park and ride and carpooled to the trail head. We arrived at the TH at 6:30, greeted by some stiff winds blowing up the saddle where we parked. The TH is right at the apex of the curve that cuts through Dawson Saddle and easy to miss just driving by. There is a forestry sign denoting the trail, but it's about 500' up the trail in the middle of the hill so it's easy to miss. 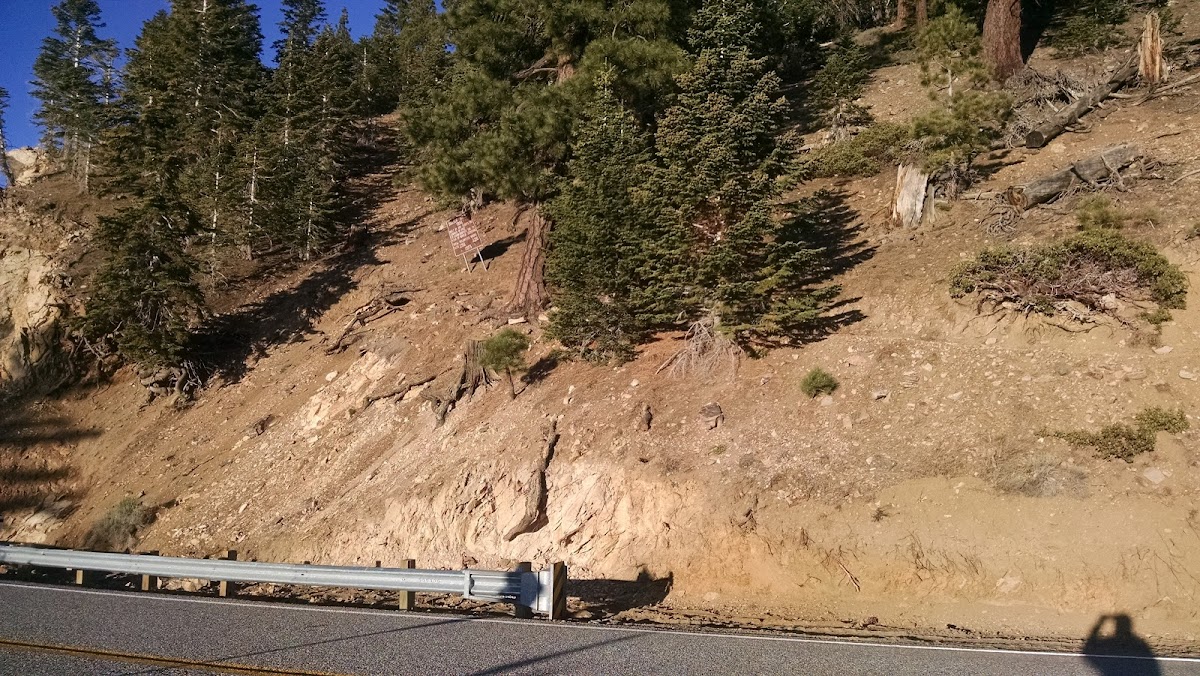 The trail switchbacks up the hill until gaining the ridgeline, where it continues along until you come to the base of Throop Peak and then contours around the east side of Throop where it intersects the PCT. From the middle of the ridge line before Throop you can look west to Islip Peak and Windy Gap. 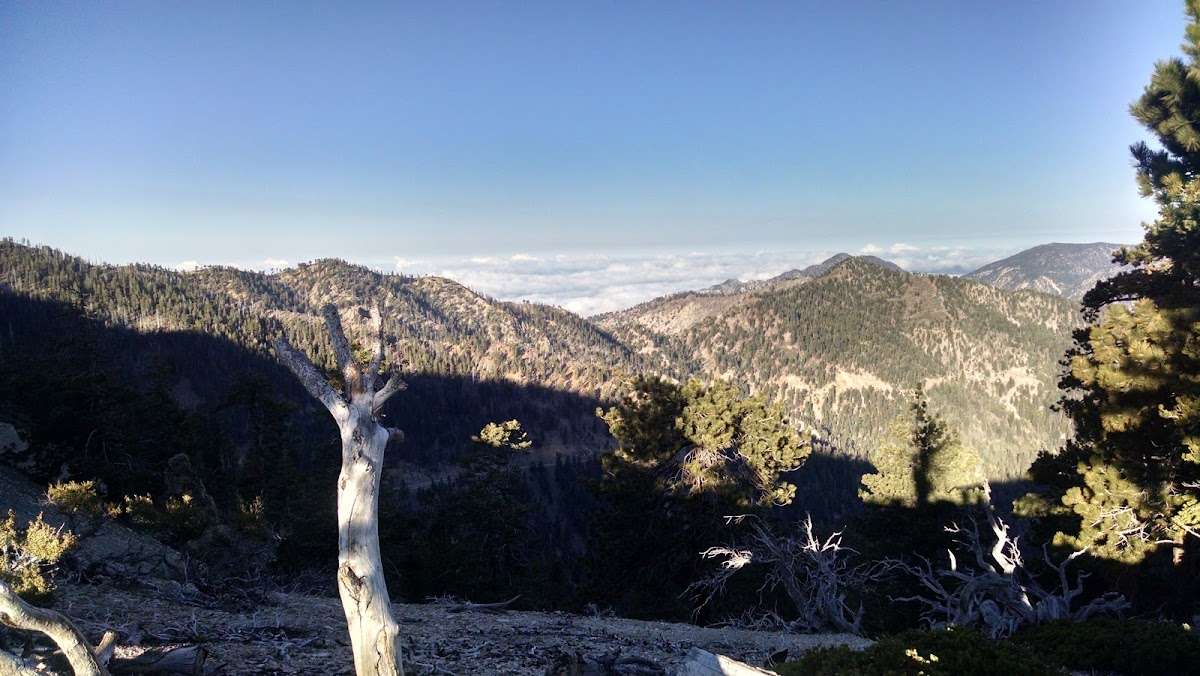 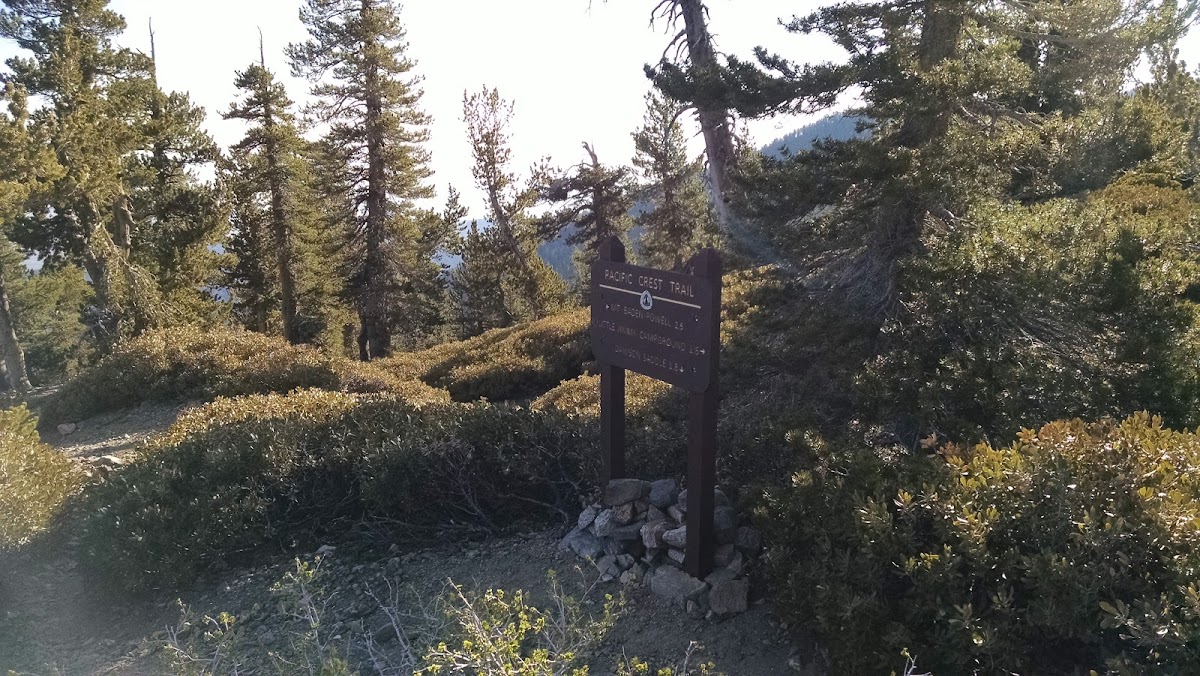 Looking back to Dawson Saddle where we began with the San Andreas fault and the Antelope Valley in the distance: 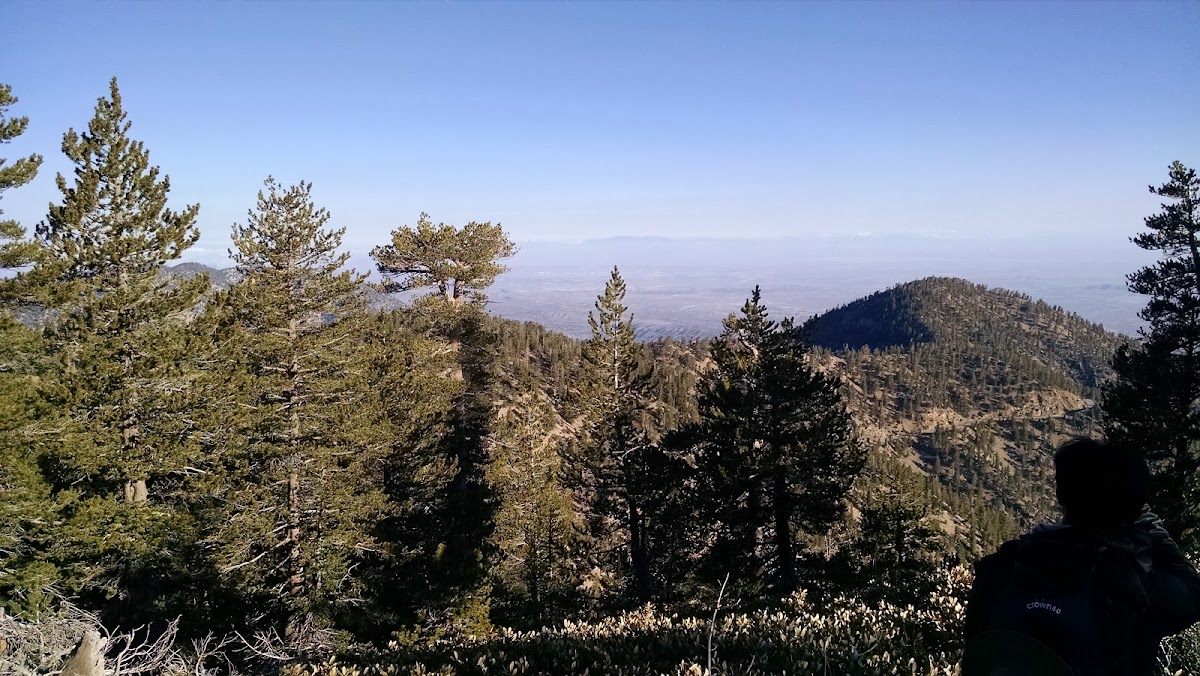 From the PCT junction there is a use trail that heads up the north eastern flank of Throop Peak until you reach the summit bald. At the summit there is a plaque noting that the peak was named for the founder of then Throop University, now better known as Caltech. 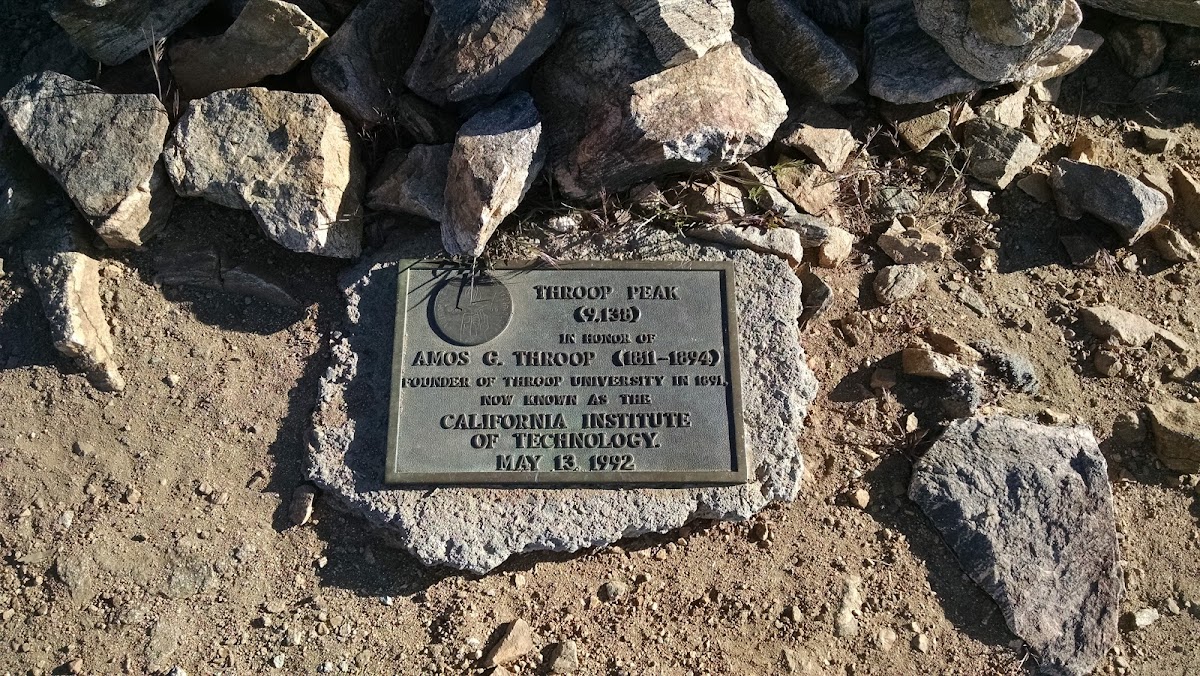 Pano from the summit bald with Mt. Baldy at the far left:

From there we headed back the way we came and rejoined the PCT, heading east loosing some elevation and aiming for the next peak on the ridgeline - Mt. Burnham. Similar to Throop, the PCT contours around the actual peak where you catch a use trail on the east side and then hike to the top. In typical fashion for peaks in the San Gabriels the top is usually just a bald, so no surprise here. Jose decided to have is breakfast here before we headed back down the ridgeline and continued on the PCT. 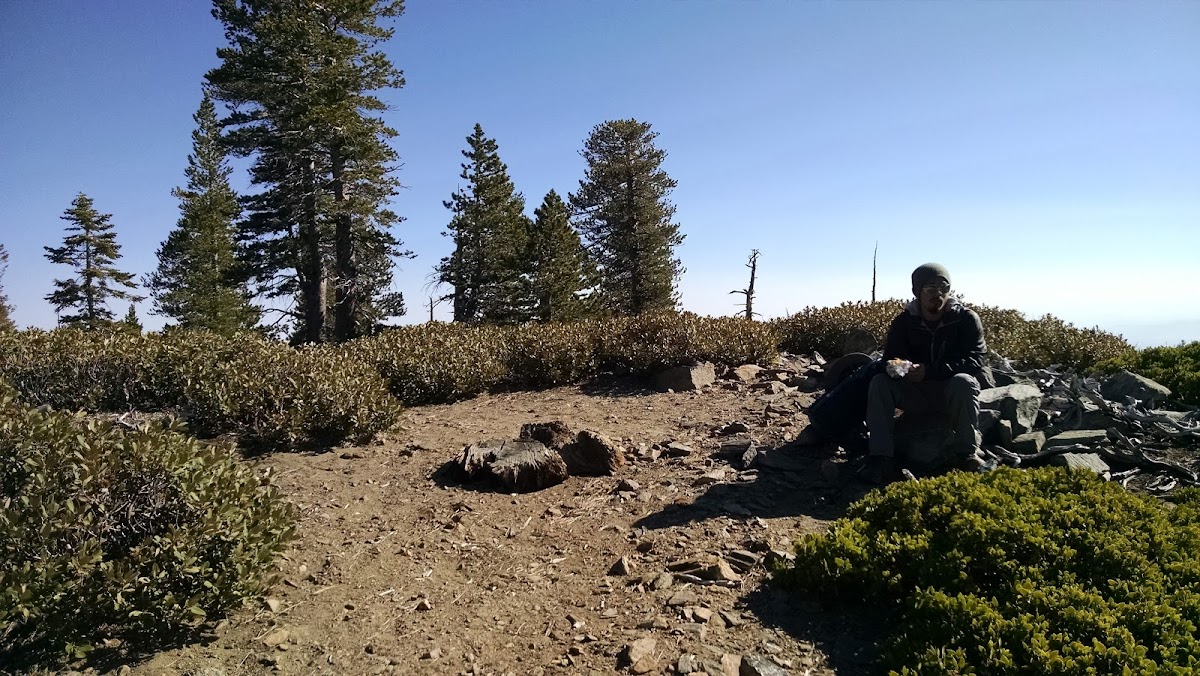 Again, you loose some elevation when heading along the ridgeline to the saddles between the peaks, only to gain it back on the other side. From here it's a nice shaded hike along the north side of Mt. Baden-Powell as the PCT contours around the actual peak. On the north east side where the spur trail leaves the PCT you have the Wally Waldron tree, a limber pine that is estimated to be about 1500 years old and named after a local scout leader which hugs the ridgeline: 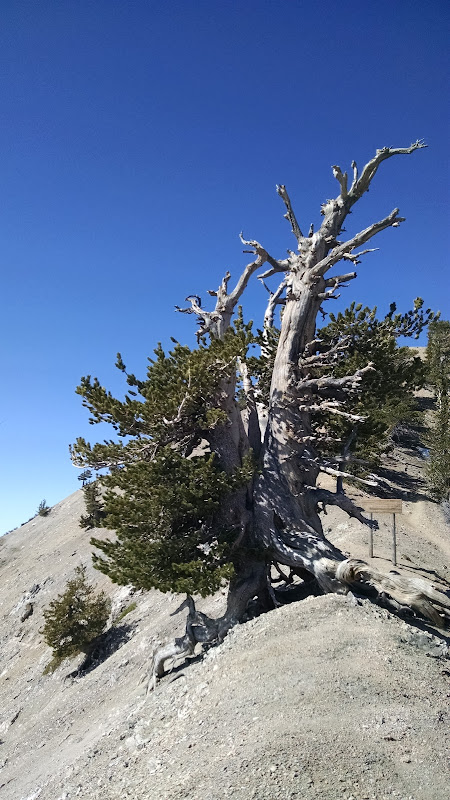 PCT to the right, and MBP summit trail to the left: 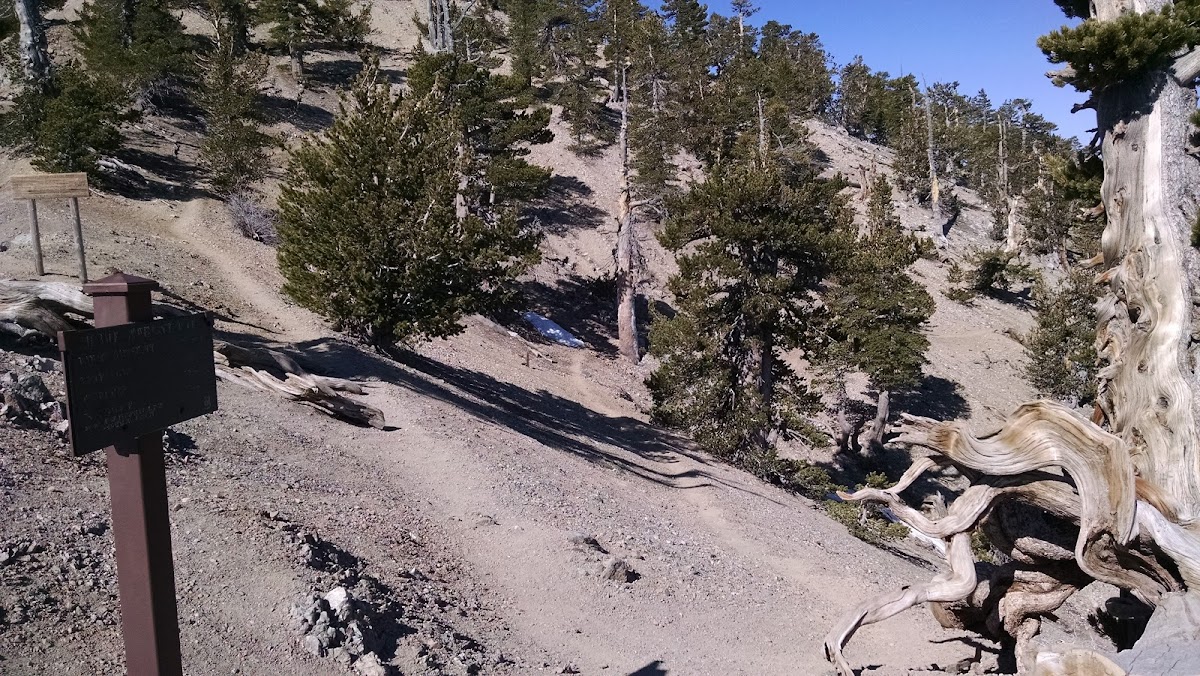 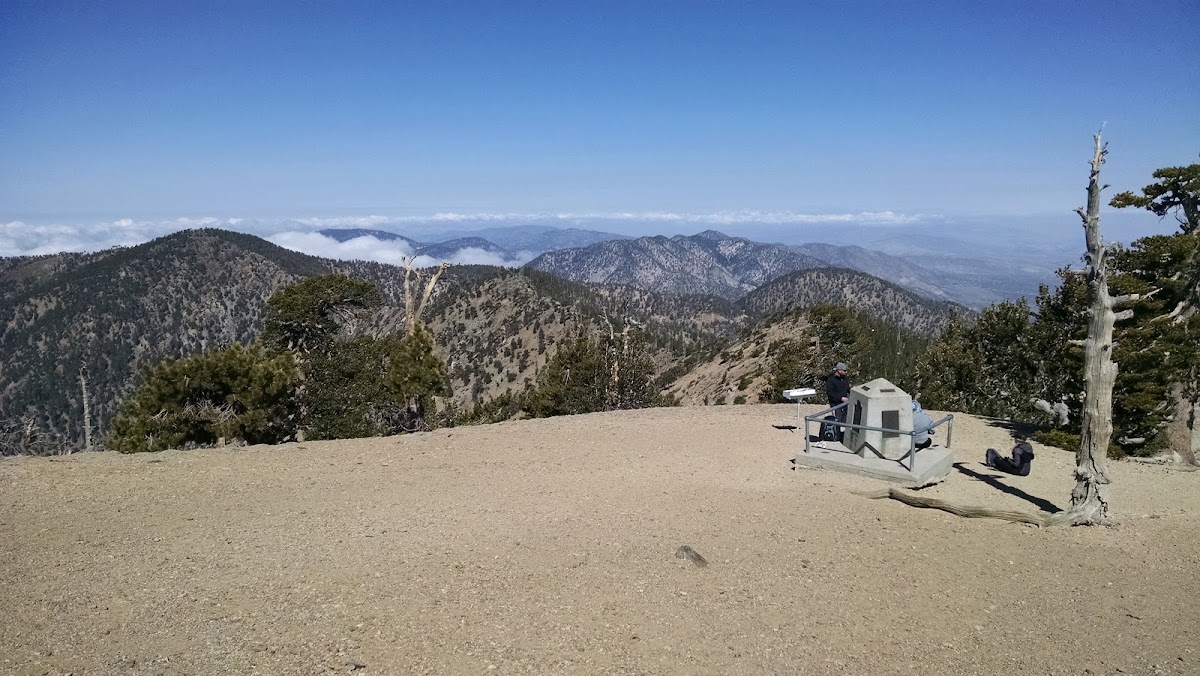 Looking west along the spine of the San Gabriels towards Mt. Wilson which is obscured by clouds. 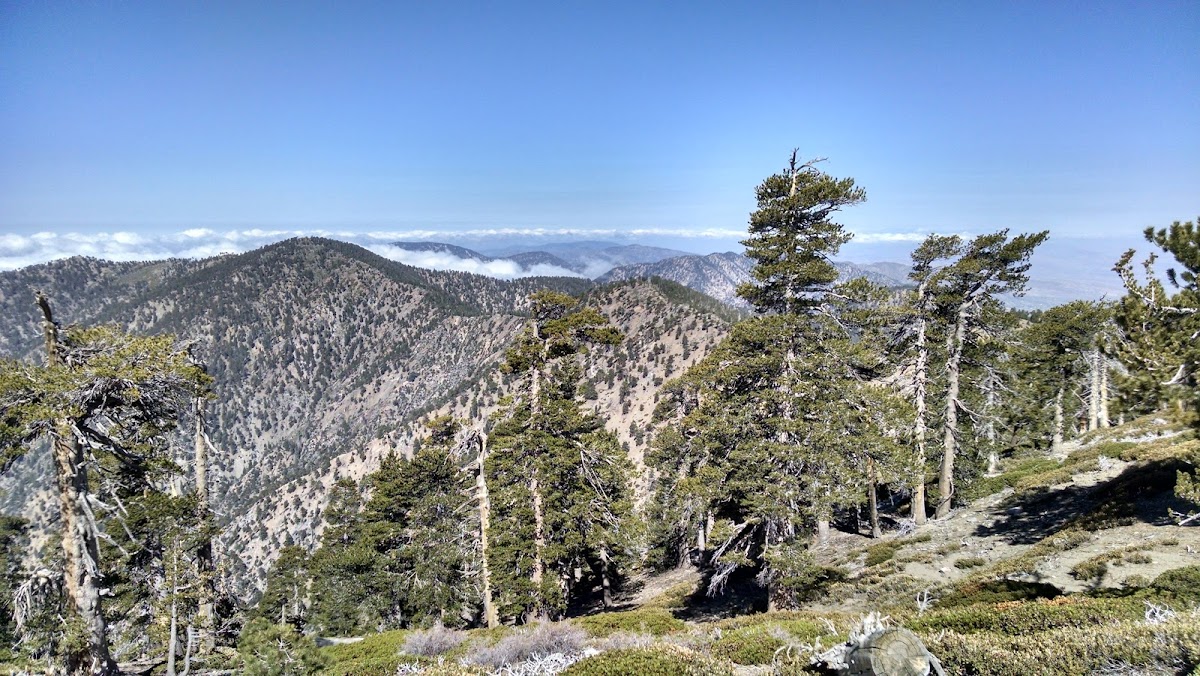 Looking south east to Mt. Baldy with the clouds billowing up from the draw below: 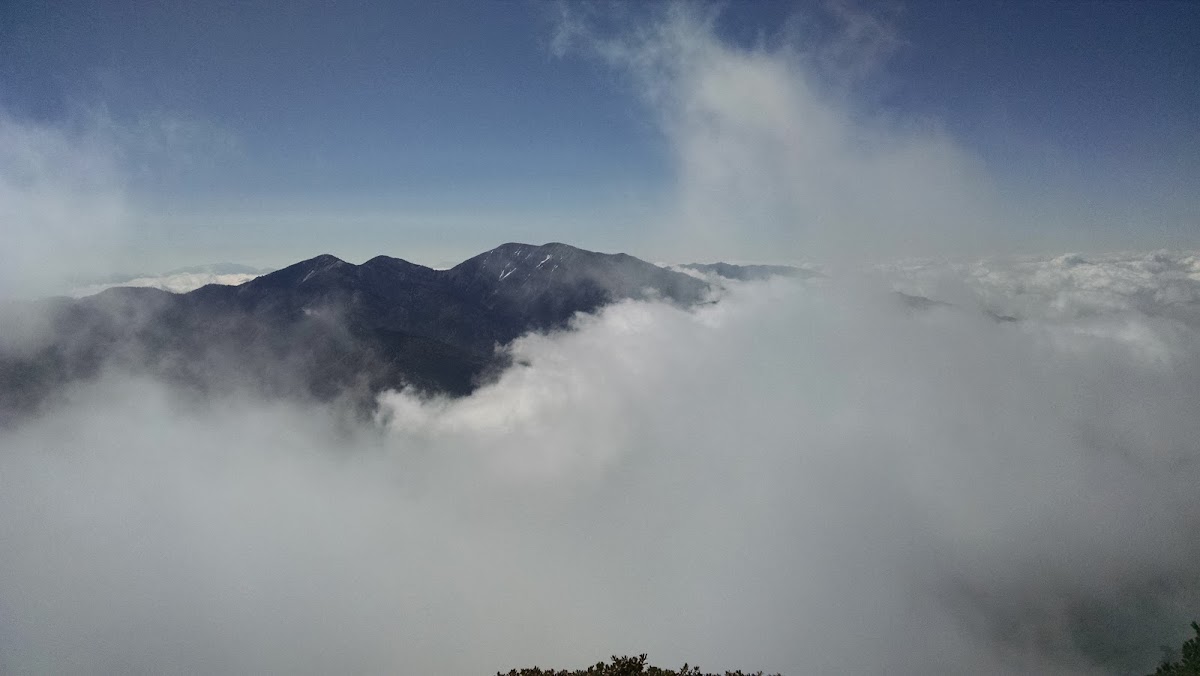 Old benchmark on the peak reflecting it's original name of North Baldy before it was renamed in 1931 for Baden-Powell: 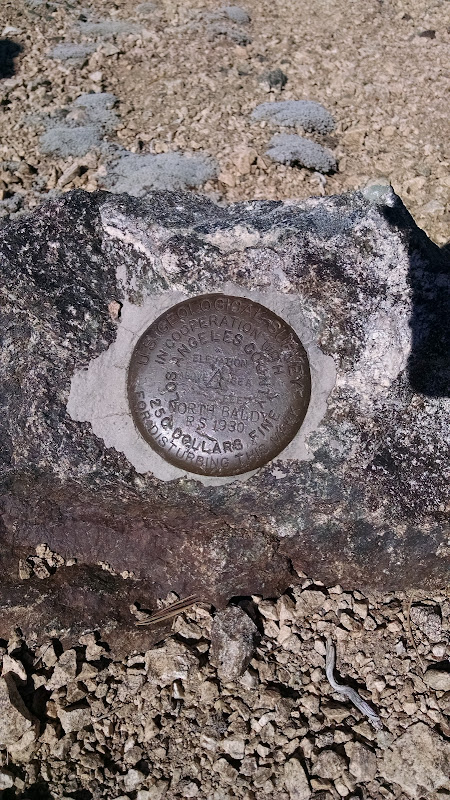 Jose on the Summit of MBP with El Mirage Dry Lake bed far off in the distance to the north east: 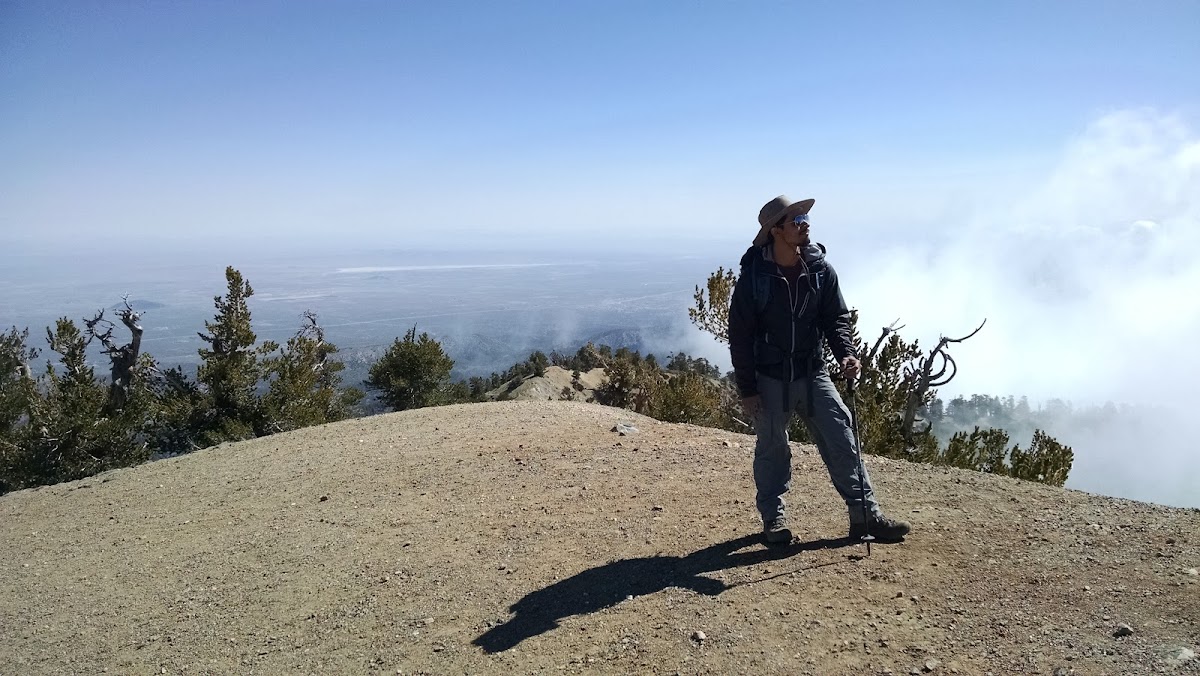 Looking south over the clouds obscuring the land beyond from the peak: 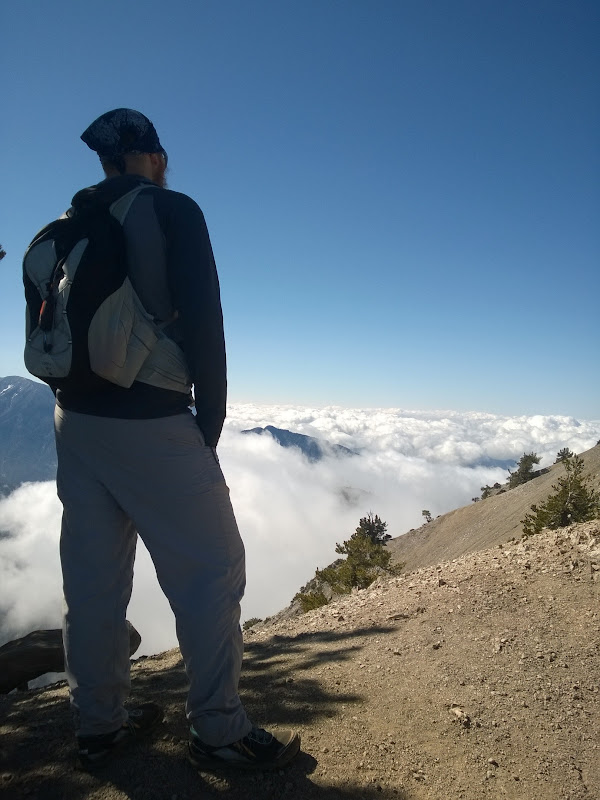 We hung out for a few taking pics from the top and then proceeded to retrace our steps back to the trailhead. Looked back once we were just above the saddle between Mt. Burnham and Throop Peak to see the clouds beginning to obscure the top of Mt. Baden-Powell: 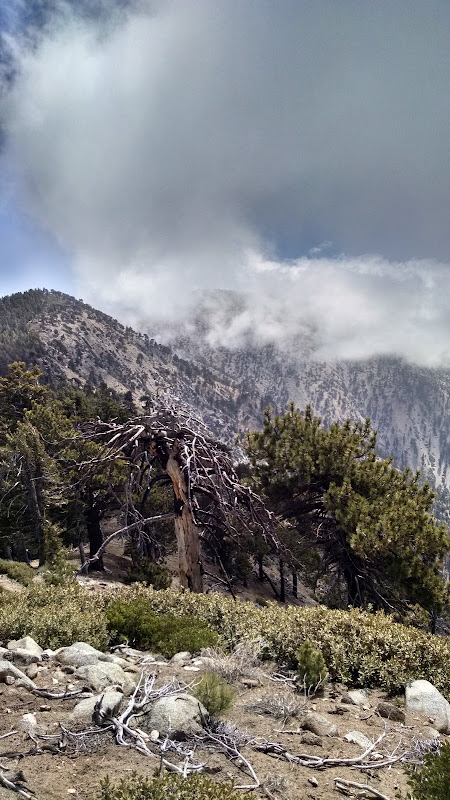 Back to the PCT / Dawson Saddle trail Junction: 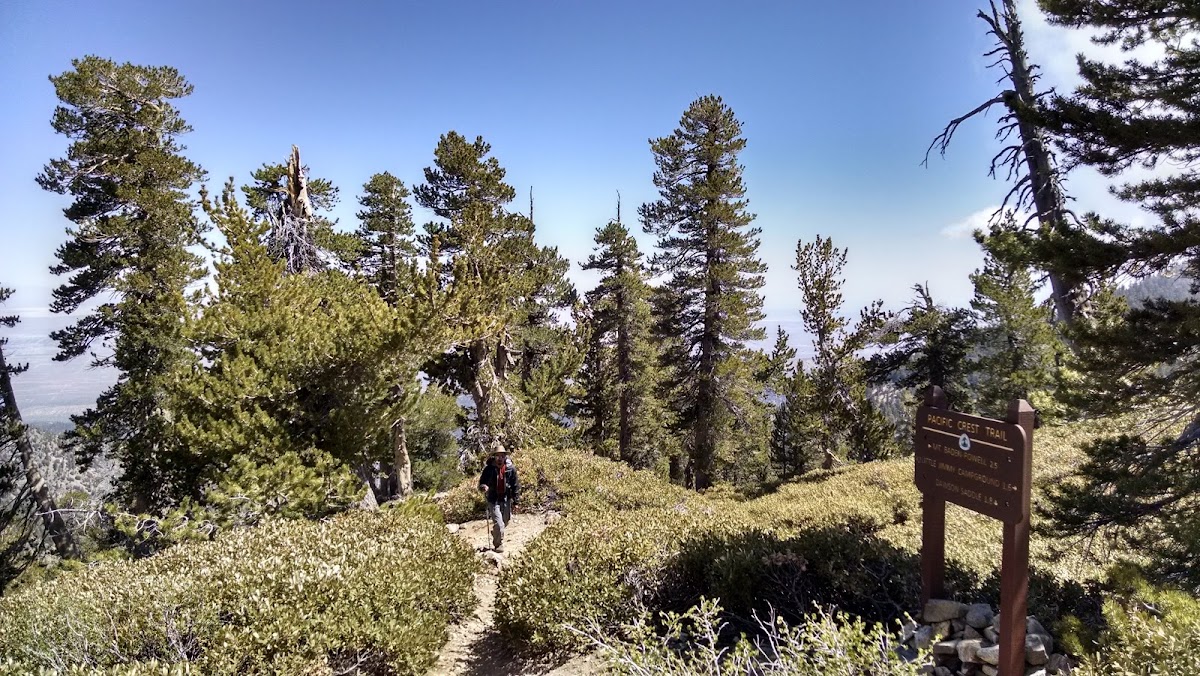 From there it was an easy downhill trek back along the ridgeline to the trailhead. Good quick out and back hike at a higher elevation than we normally get to in the front country of the San Gabriels. 10 miles in 5 hours and three 9000' foot peaks tagged for giggles while Jose was trying out his new Granite Gear pack and breaking in a new pair of boots. From there we headed back down the Angeles Crest Highway to La Canada, grabbed a celebratory lunch of pizza at Blaze, and then went on our separate ways.

Nice! Great report. How was weather? Temperature? I was gonna do shorter version of this hike Sunday w my little guy on my back but decided against fearing too low temps for him.
Top

sambieni wrote:Nice! Great report. How was weather? Temperature? I was gonna do shorter version of this hike Sunday w my little guy on my back but decided against fearing too low temps for him.

Weather was great, a little windy early on but once the sun got up in the sky a bit the winds died down for the most part. I threw on a windbreaker for the first bit, once I got moving though that was quickly shed. I'd say temps were in the 50's.. Were you planning on going to go up from Vincent Gap to the top of MBP? I did that hike once, the switchbacks are a killer. Never again. This route is a mile longer each way, but a lot more gradual of a climb to the top..
Top

I attempted MBP a few years back from Vincent Gap, but we had to bale. It was early December and snow/ice was getting worse as we plodded along and neither of us had crampons/microspikes.

I was going to do either just to Throop Peak or hike to Mt. Islip. But nixed it thinking temps in 40's/low 50's was gonna be too tough for my little guy who I planned to carry with me. Will try and get out there in a few weeks and attempt it.
Top

Got up there last Sunday. Did the same trip. Great hike. Here are videos from top of Mt Baden Powell, plus a view of a small forest fire that broke out. Itsl ooking across from near Dawson Saddle to about Mt. Waterman area. When I exited the park, I drove by that area and fortunately was allowed to pass thru. Fire looked largely under control, but certainly nerve inducing. (My video of MBP incorrectly says its part of San Bernardino Mtns and not San Gabriels... I was a bit lightheaded from the altitude I suppose).

Users browsing this forum: No registered users and 0 guests