A forum that'll feed your need for exploring the limitless adventure possibilities found in "other" places. Post trip reports or ask questions about outdoor adventures beyond the Sierra Nevada here.
Post Reply
1 post • Page 1 of 1

Recently while on a two week trip to Spain I managed to sneak in a day trip to the Picos de Europa National Park. Originally we had planned on doing an overnight and staying at the Refugio de Urriellu at the base of Naranjo de Bulnes and tagging Torre Cerredo, the highest peak in the Picos. Due to time constraints we had to change our plans and settle for a day hike to Torre de Horcados Rojos.

On the morning of August 14th we got up at 5:30 to leave our friends house near Bilbao at 6:00 to make the 3h/210km drive to our start point. Due to time constraints we were going to cheat a little bit and take the cable car from Fuente De up to El Cable. The cable car begins operating at 9:00 so we were on track to get there when they opened. They day had started out overcast, but the weather forcast was for great temps and mostly sunny skies. After getting off the autovia we ran into a little local morning traffic: 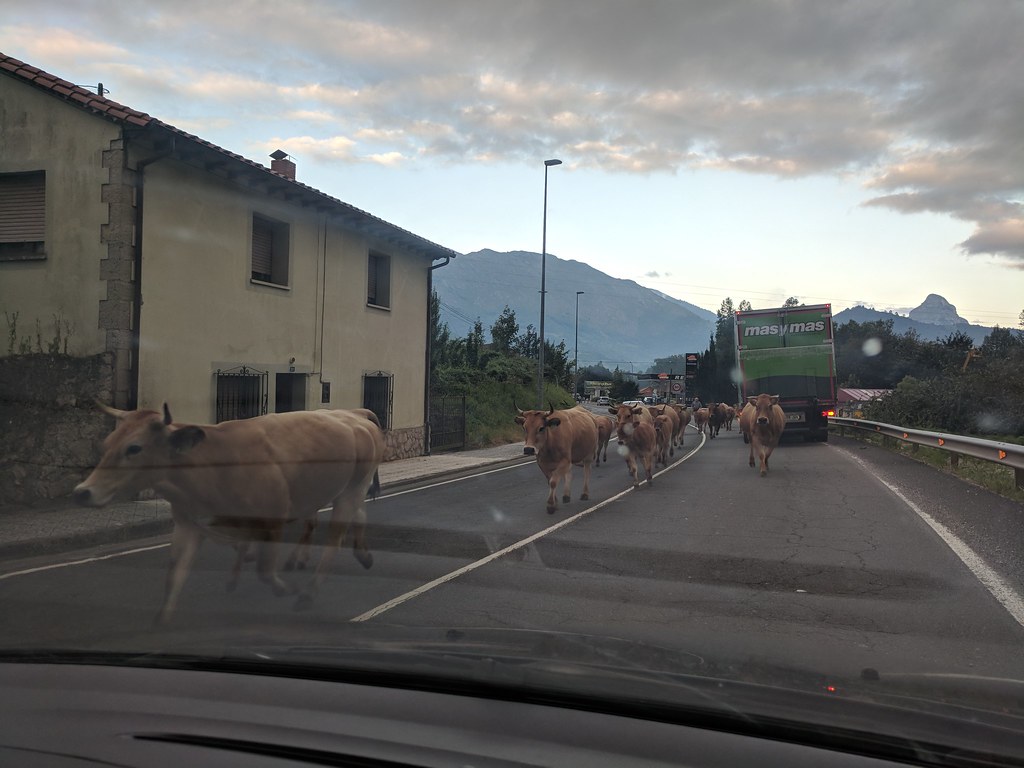 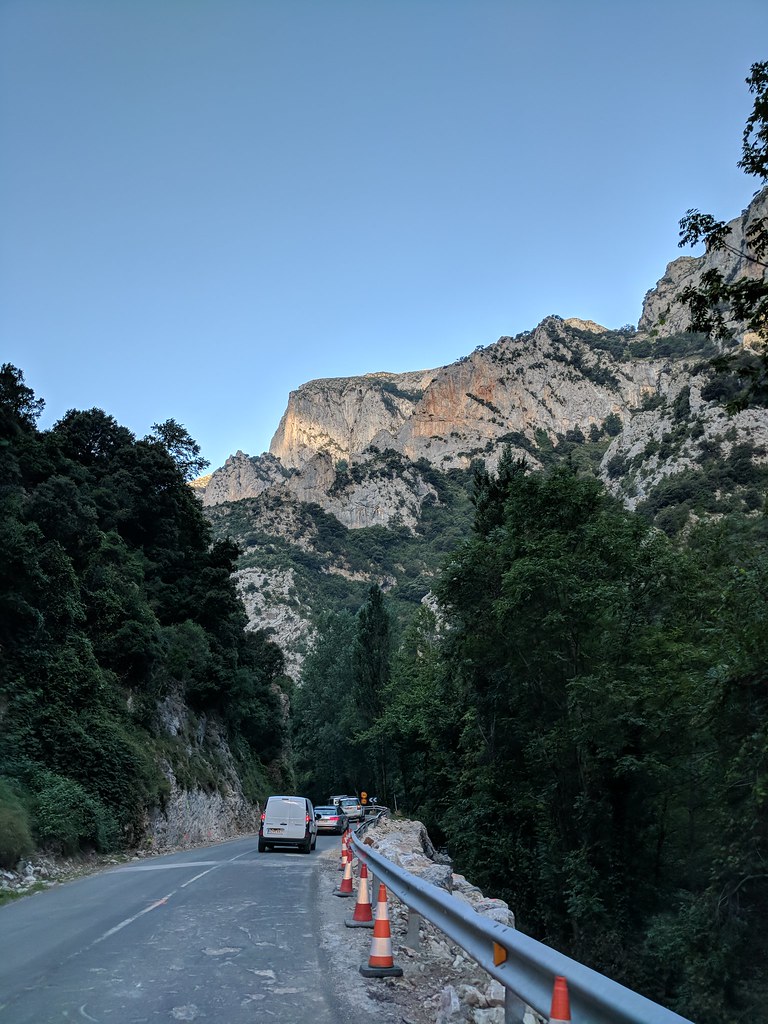 They were doing construction so things slowed down quite a bit here and there. Finally just before you reach the town of Potes the canyon relents and the road becomes a nicely flowing mountain road. Around this time the clouds cleared and you could start to see the surrounding peaks: 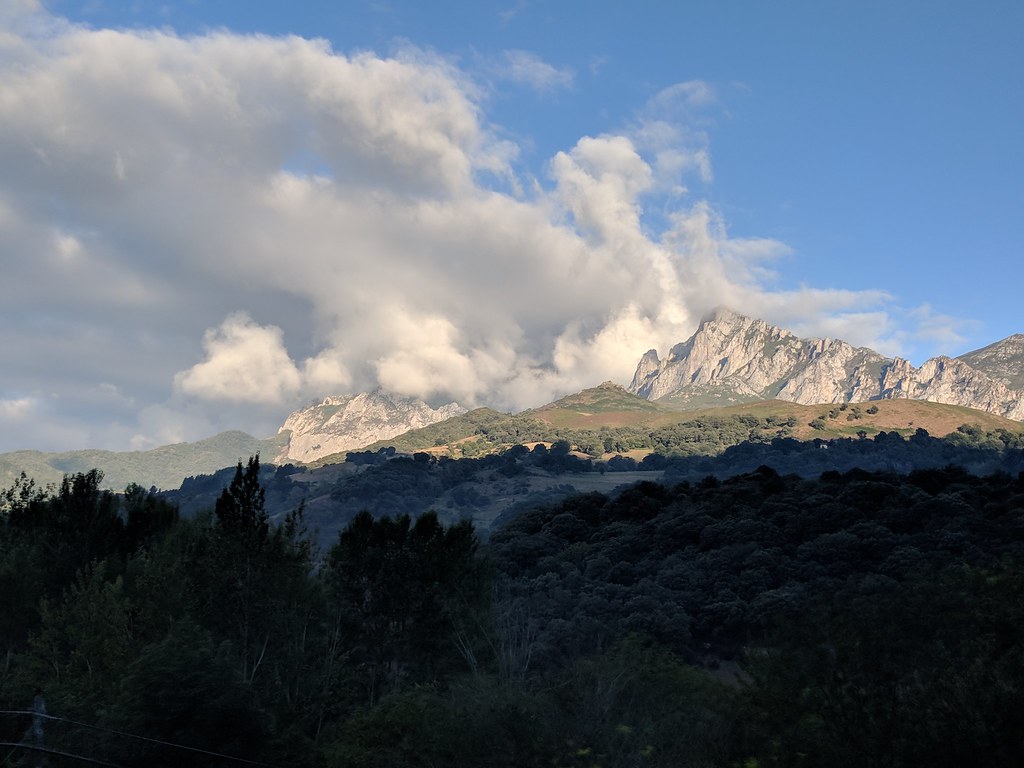 At Potes we made the turn onto CA-185 for the final stretch to Fuente De. A short time later we arrived at the car park around 9:15 and the mountains above were still socked in. We walked up to the base of the cable car where we needed to purchase tickets. Looking up you can see the cable cars descending from the clouds: 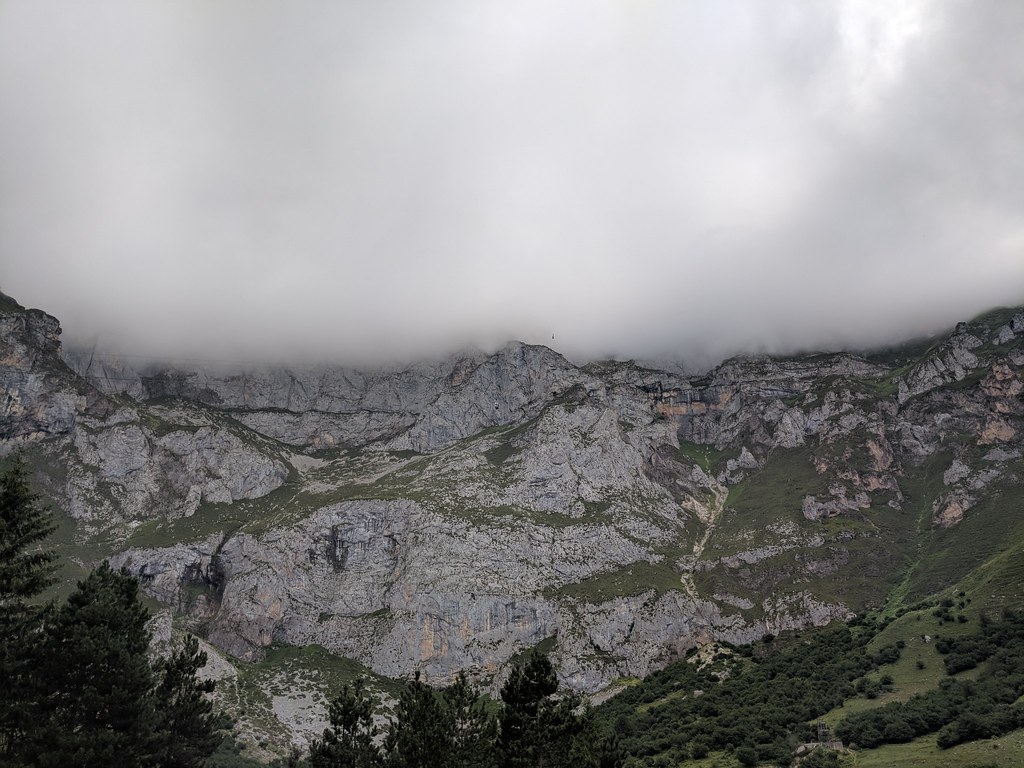 After standing in the queue for tickets (50 euro round trip for me, my son and my friend) we queued up and waited for our number range to be called. At around 10:15 we were waiting with our group of 20 for the cable car to come down and whisk us up 1000M to the upper station, El Cable. 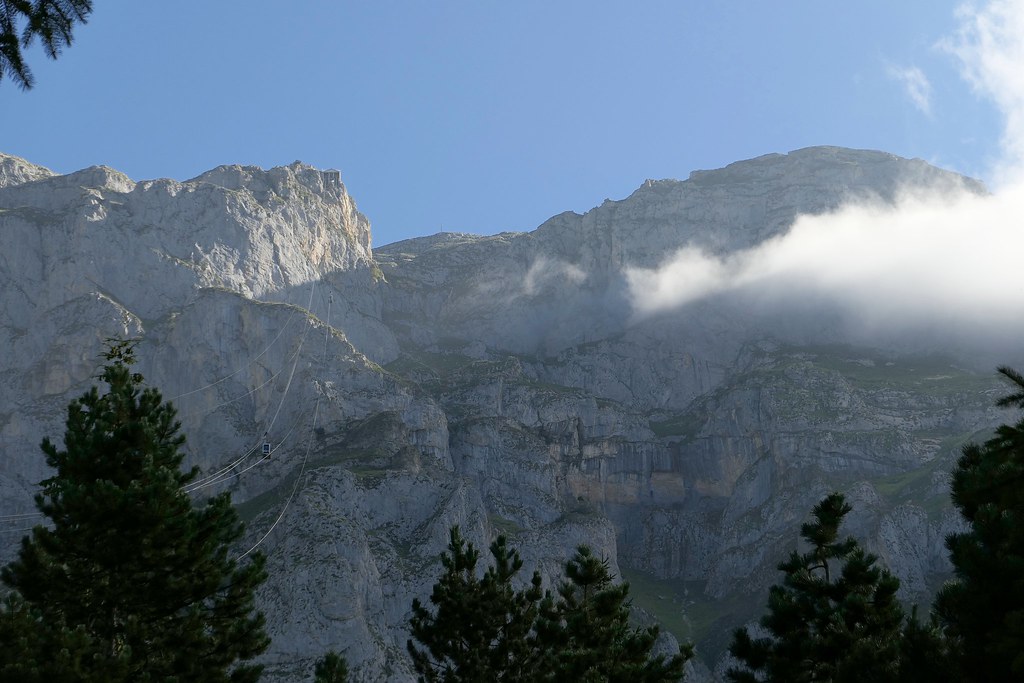 Our car coming in: 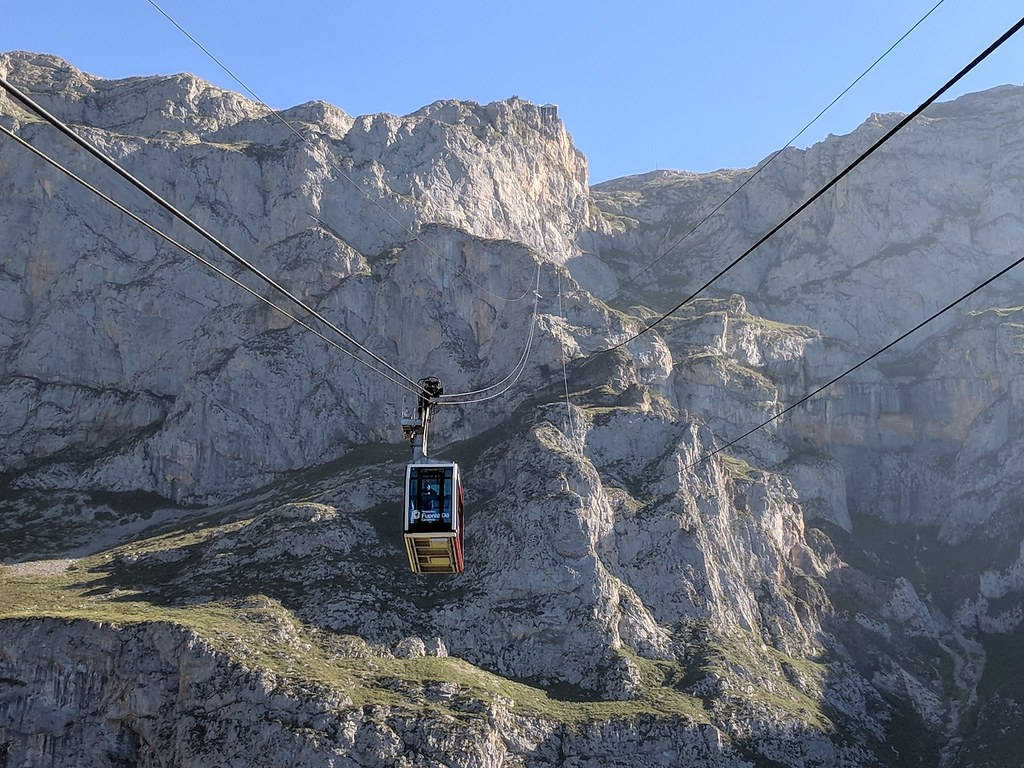 A scant 3 minutes and 45 seconds later we were at the top, aptly named El Cable - creative, right?

Looking down to where we had started: 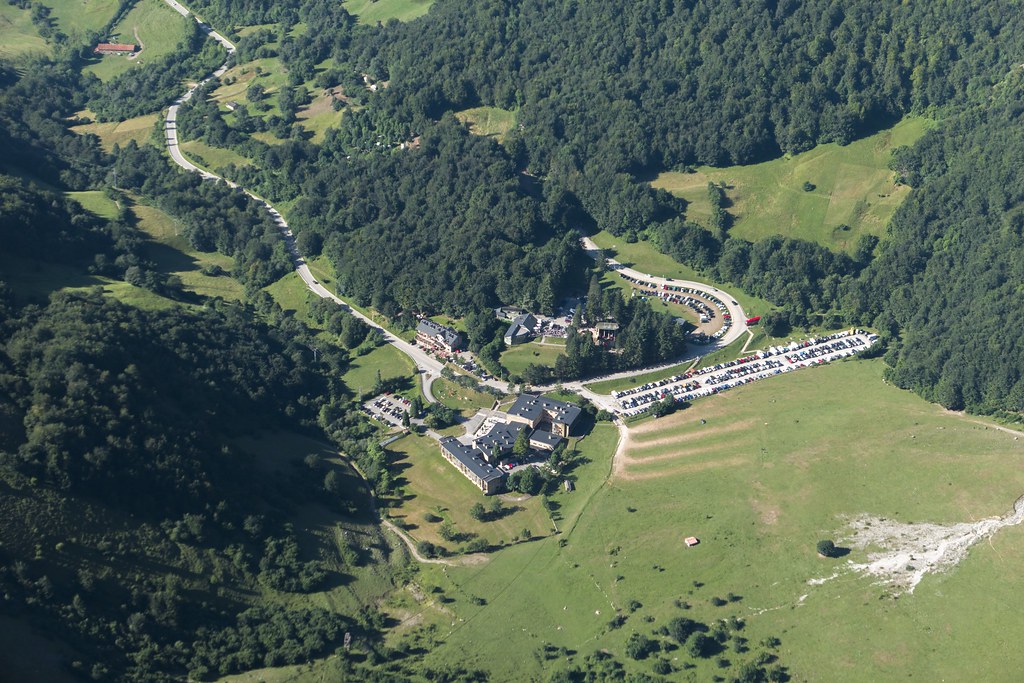 From there the track starts out pretty easy for the first mile or so as it is also an access road for the cable car station from the other side of the mountain. 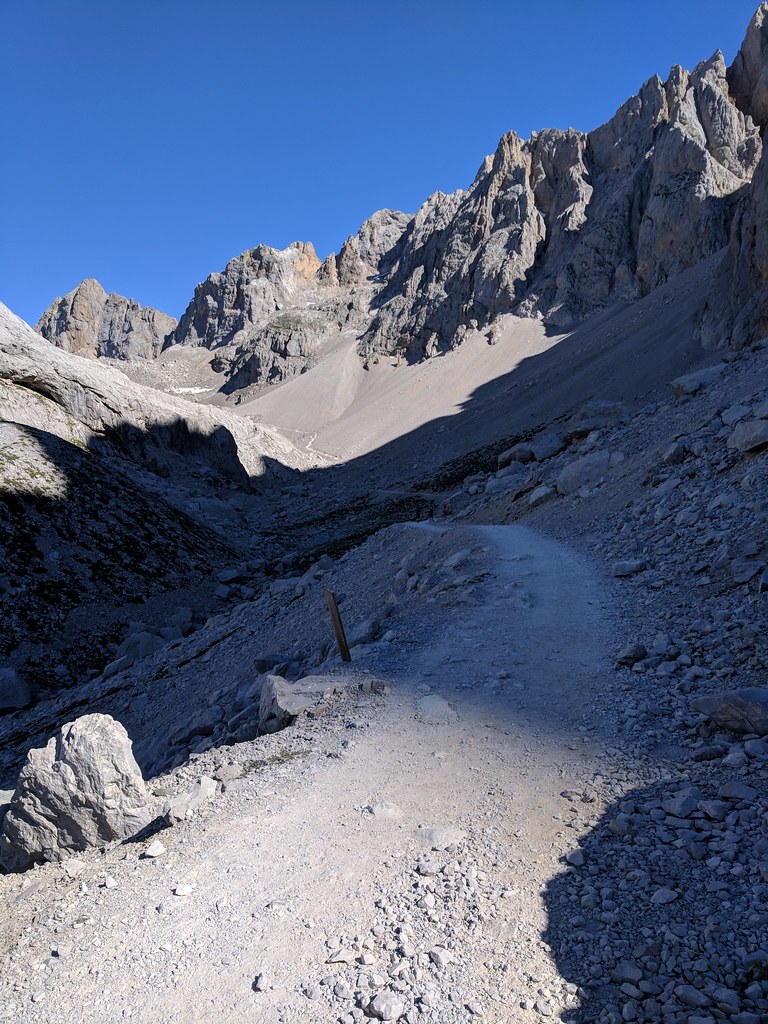 At the junction where the trail begins to climb in earnest there was a Guardia Civil Toyota Land Cruiser parked. The track narrows to a footpath and begins the climb up to the saddle between the Cabana Veronica and Horcados Rojos. 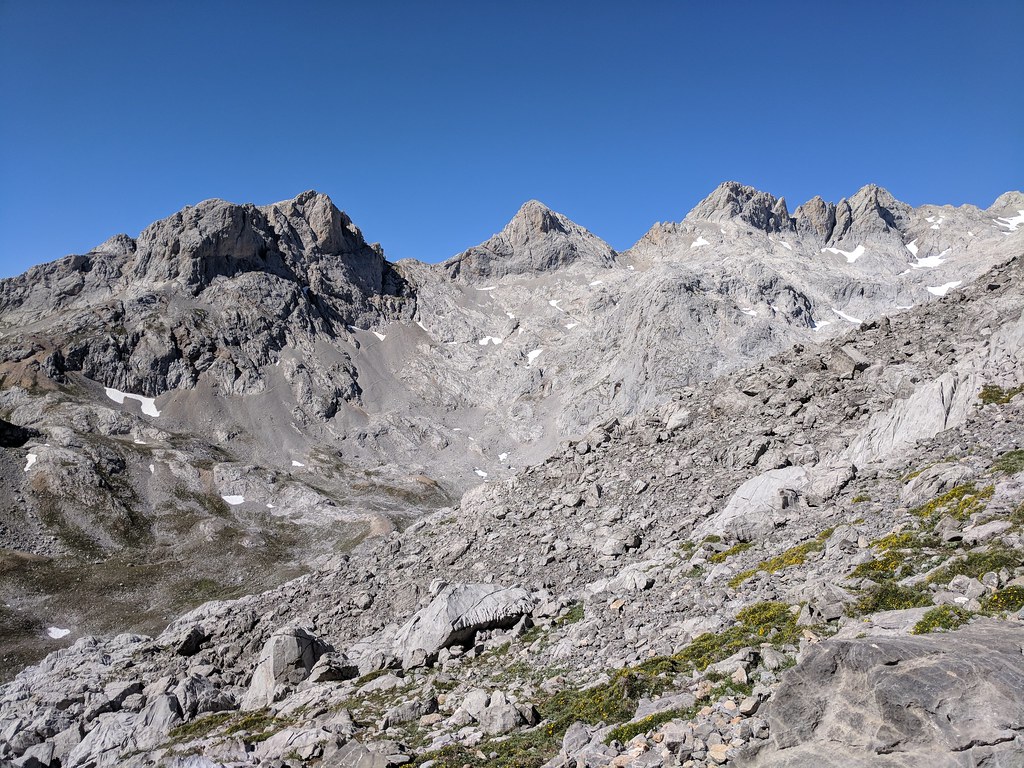 At the saddle my friend Eneko and my son Colin decided to head up to the Cabana while I continued on to the Torre. The trail dipped a bit from the saddle and then began to climb gradually, crossing a small snowfield with a good boot track across it. 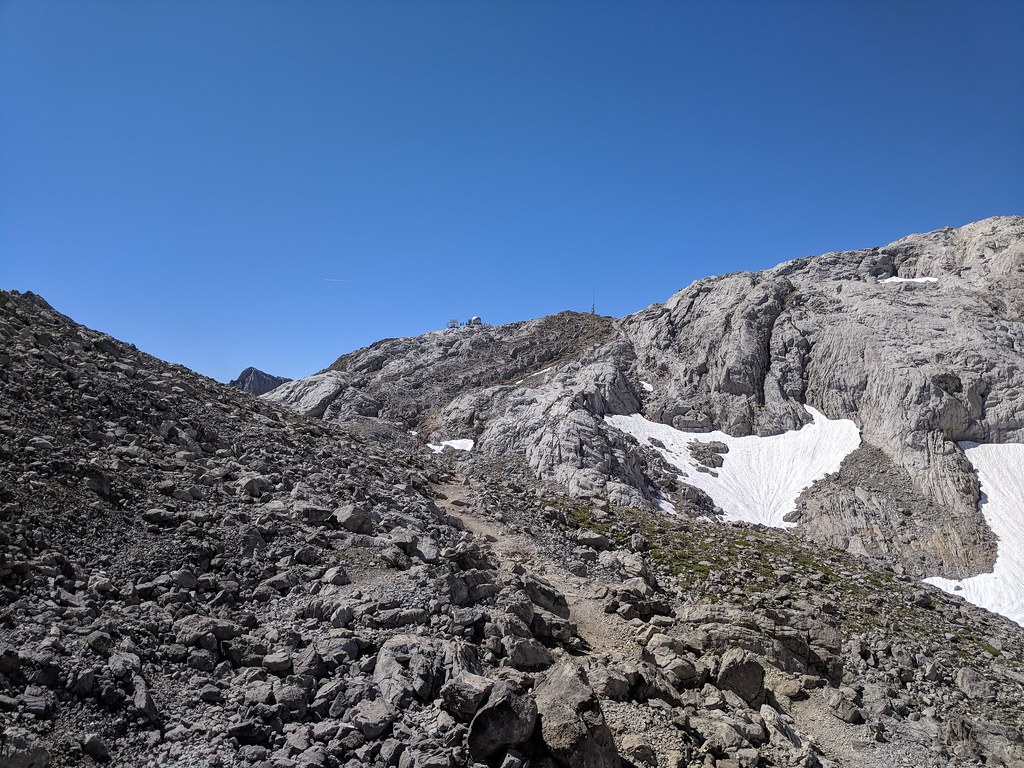 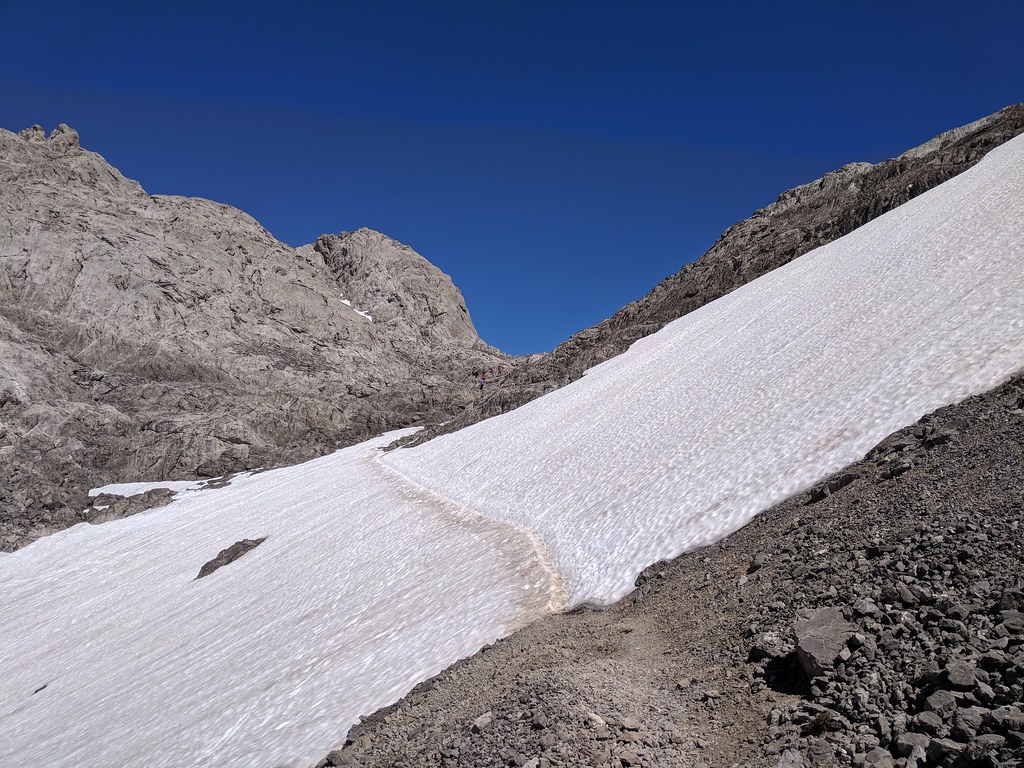 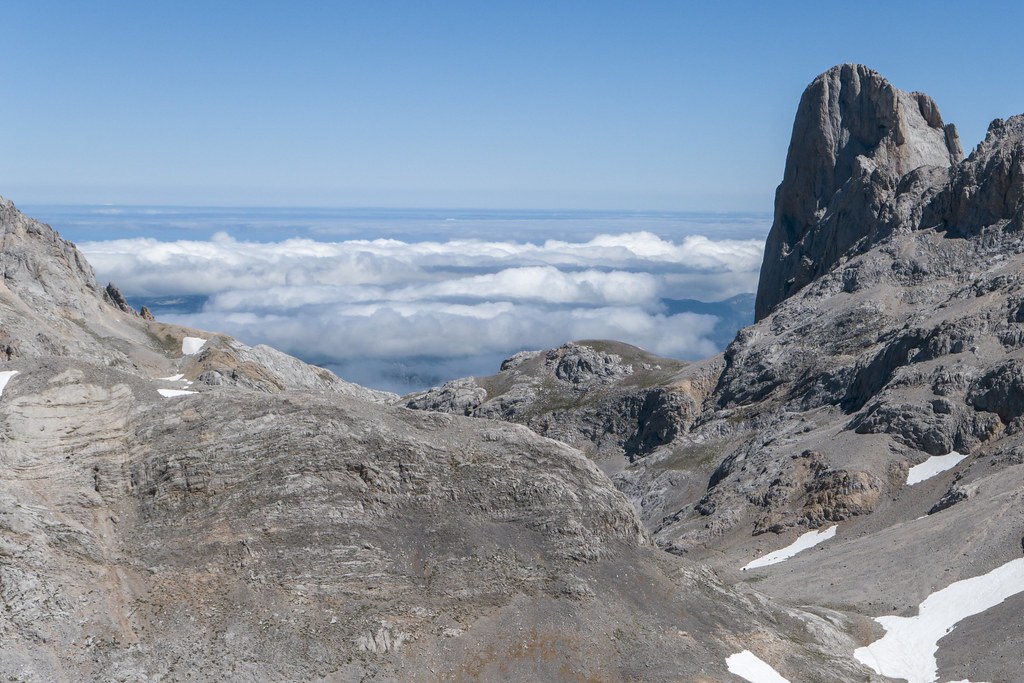 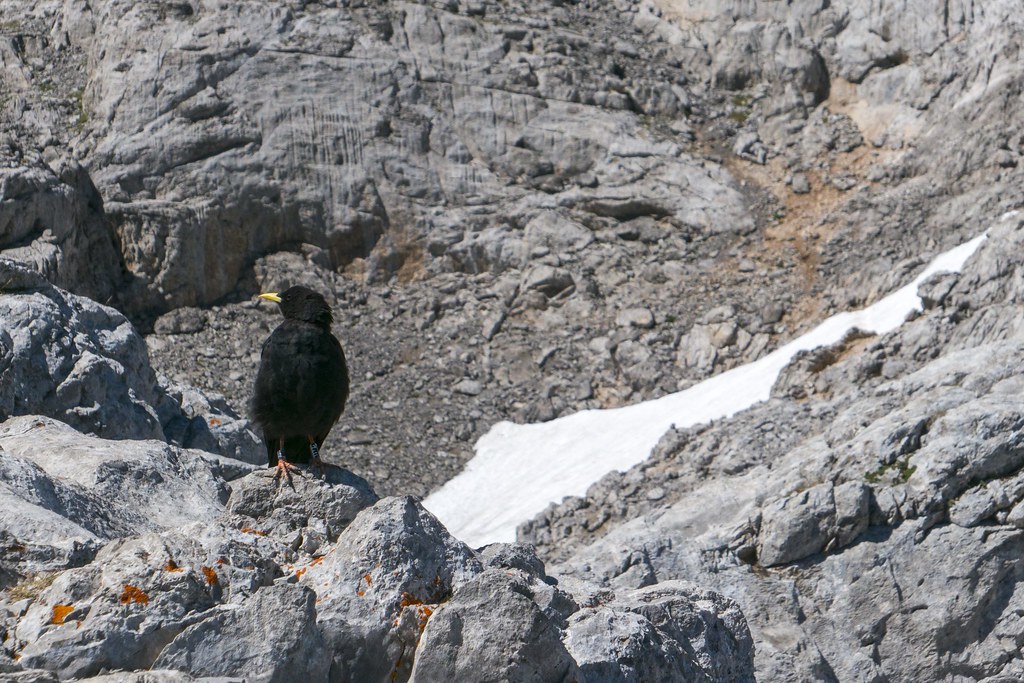 From here the trail heads up to the Torre de Horcados Rojos in earnest. It looked a lot steeper and longer than it really was up to the peak, kind of like when you are heading up Mt. Langley to the summit. After a short time I was at the summit. The summit mailbox which is a common peak marker in Spain 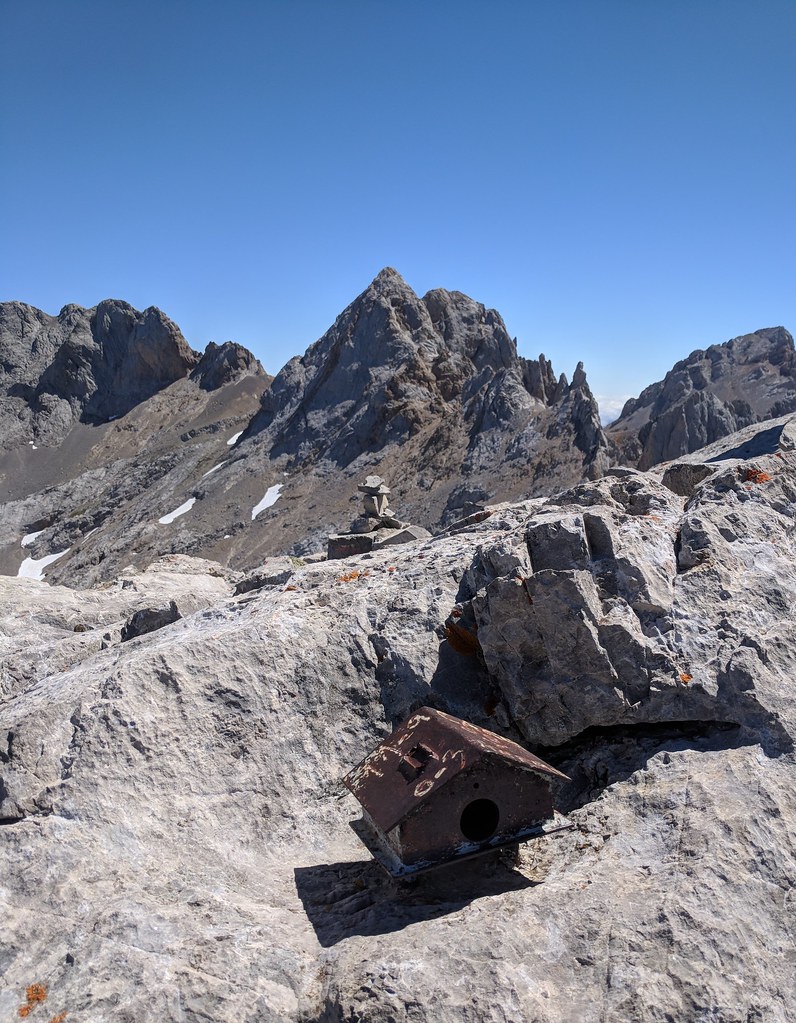 Looking south east from the peak, you can see the track leading all the way down to the cable car station 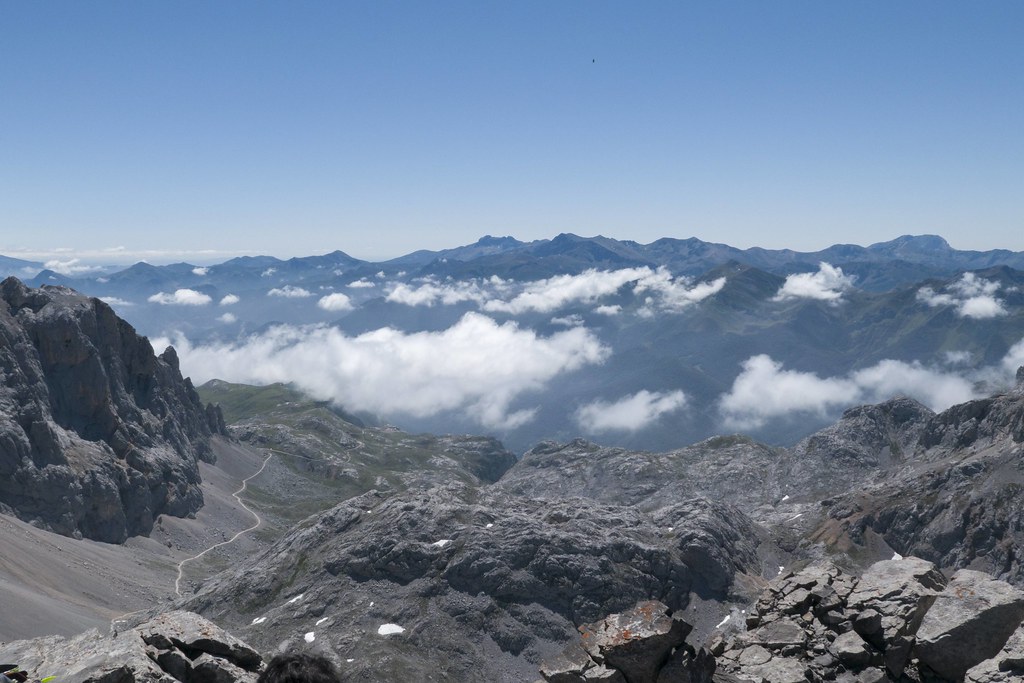 Then looking south west from the peak you can see the Cabana Veronica in the center of the frame where my son and friend were waiting. 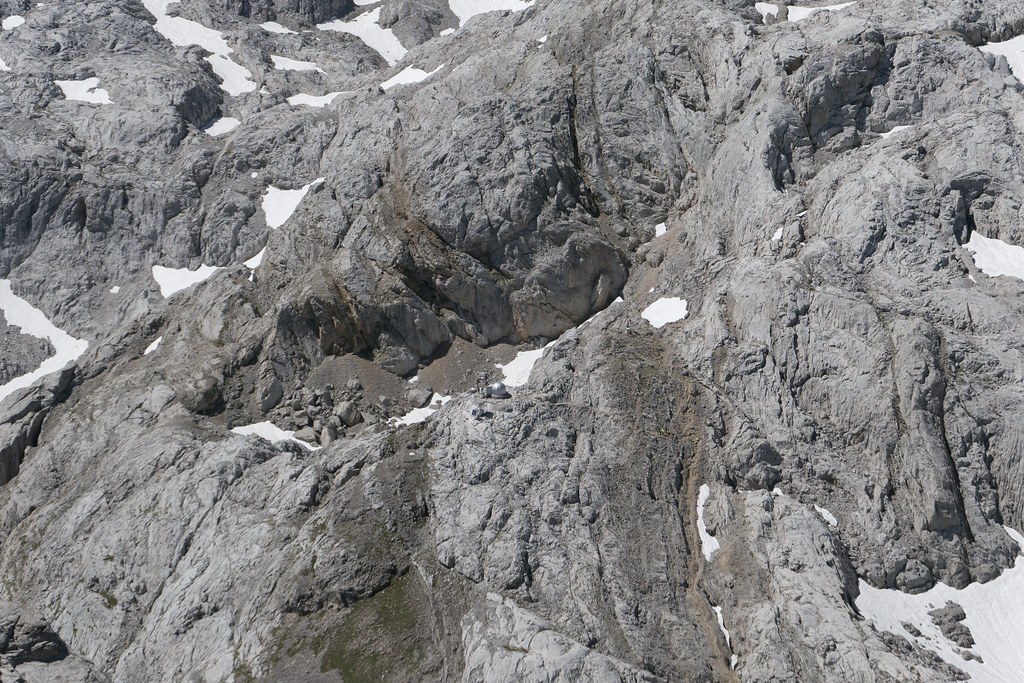 Summit selfie with the Naranjo de Bulnes (or Picu Urriellu as it's know in Asturian) in the background with Cantabrian Sea way off in the distance beyond the clouds. 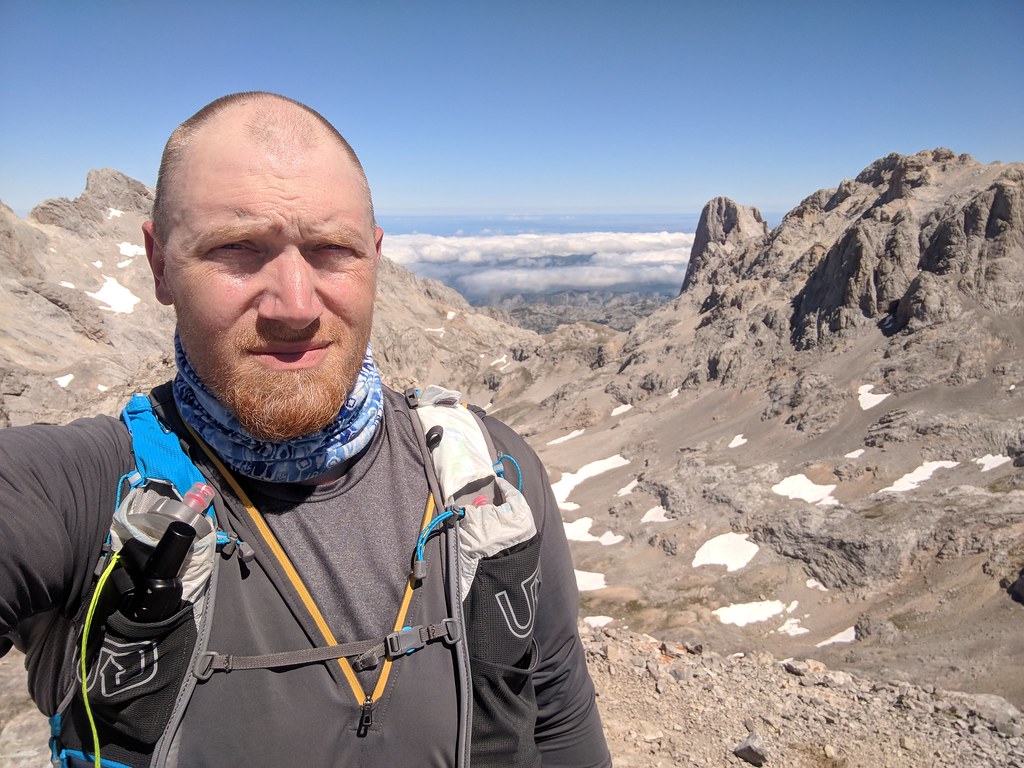 With the peak bagged I made quick descent down to the saddle where I had parted ways with my friend and son, then climbed a little bit up to the Cabana Veronica. The Cabana is an emergency shelter with 6 bunks if you get into trouble and weather closes in, especially in winter. It was made from one of the batteries of the USS Palau and placed in 1961. It took 7 days to assemble and was packed up entirely by horse. In the summer months you can make reservations and stay there, with the host of the Cabana offering meals to those staying there and selling soda, beer and other odds and sods to visitors. 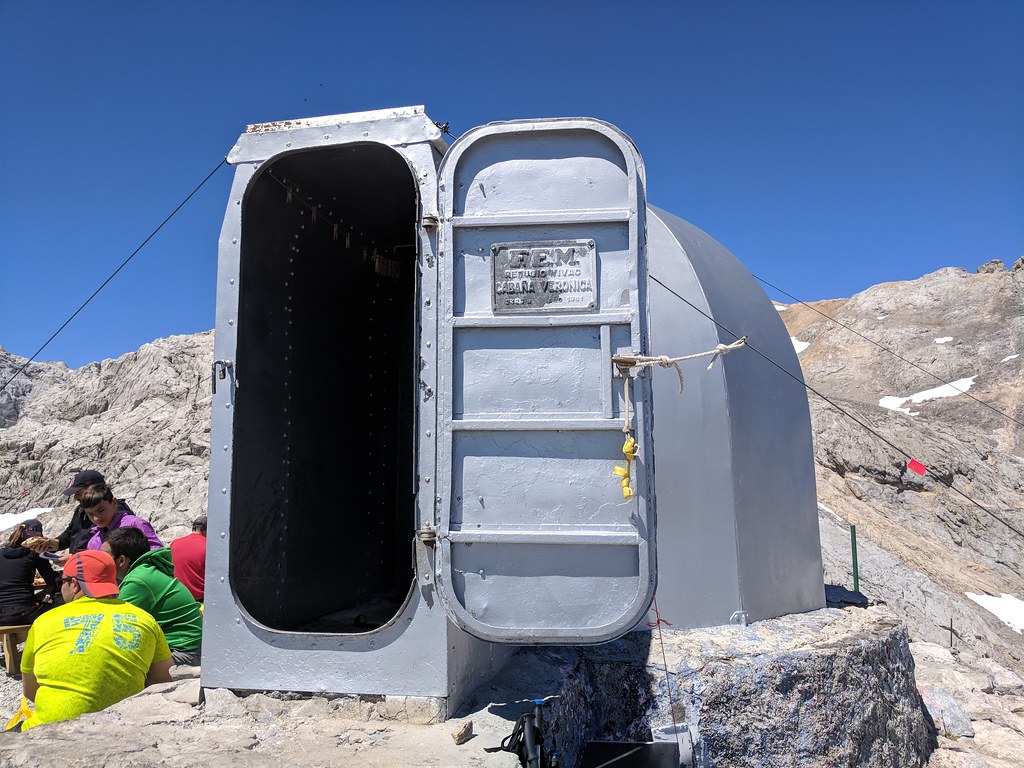 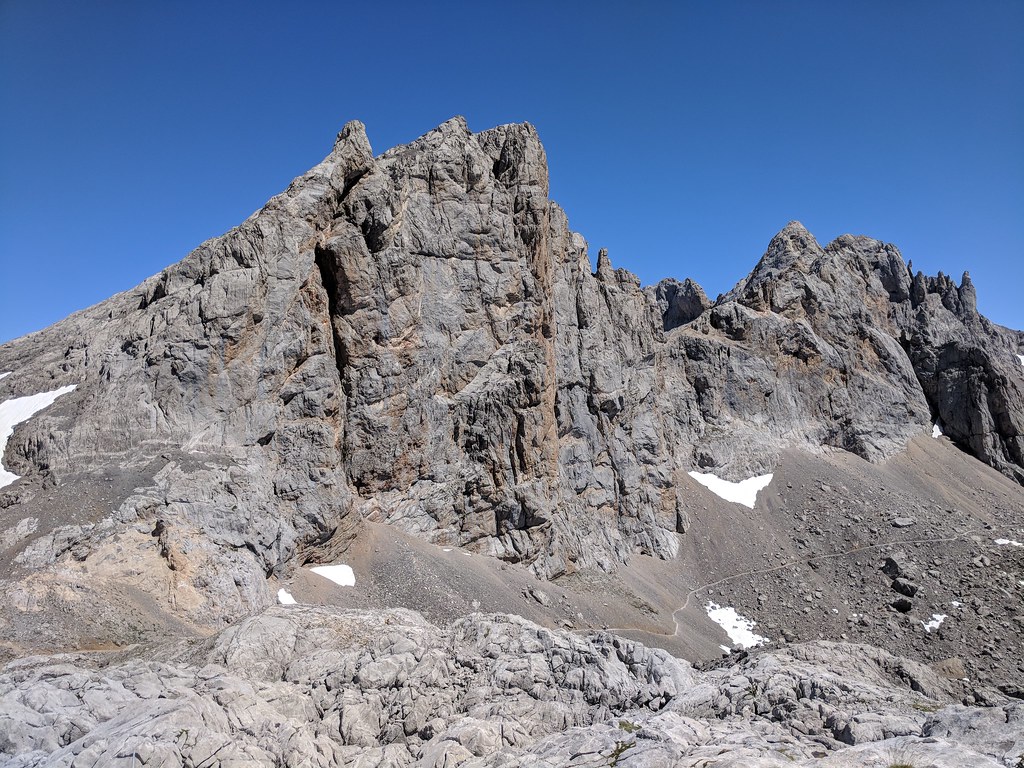 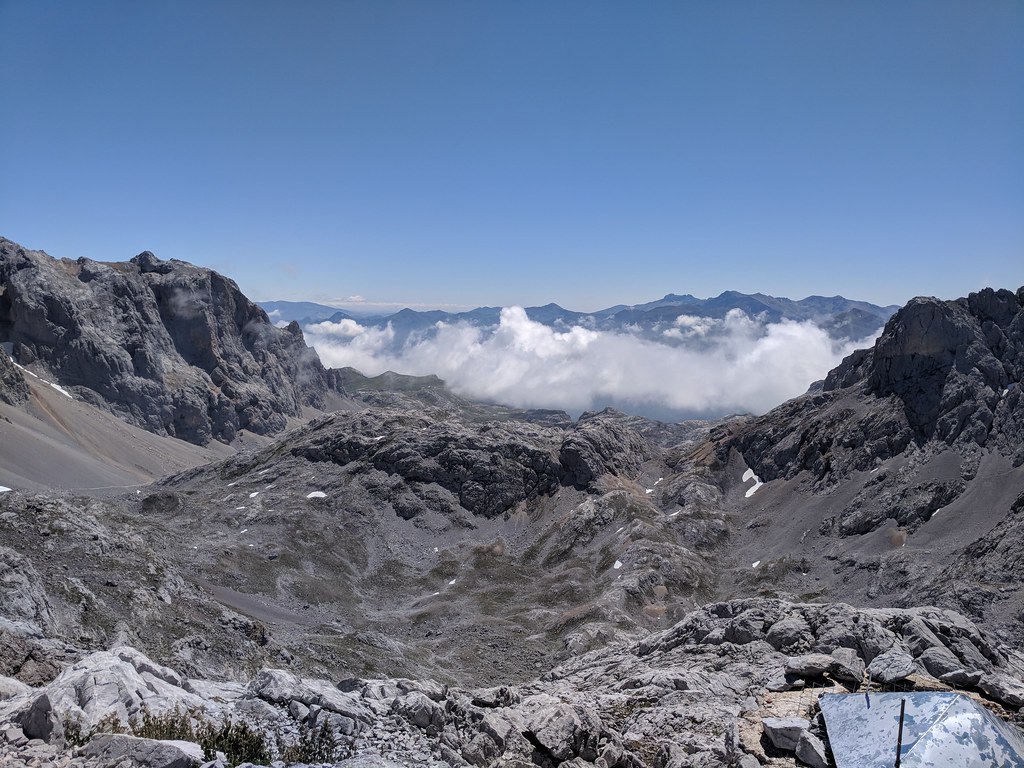 Me, my son Colin and my friend Eneko 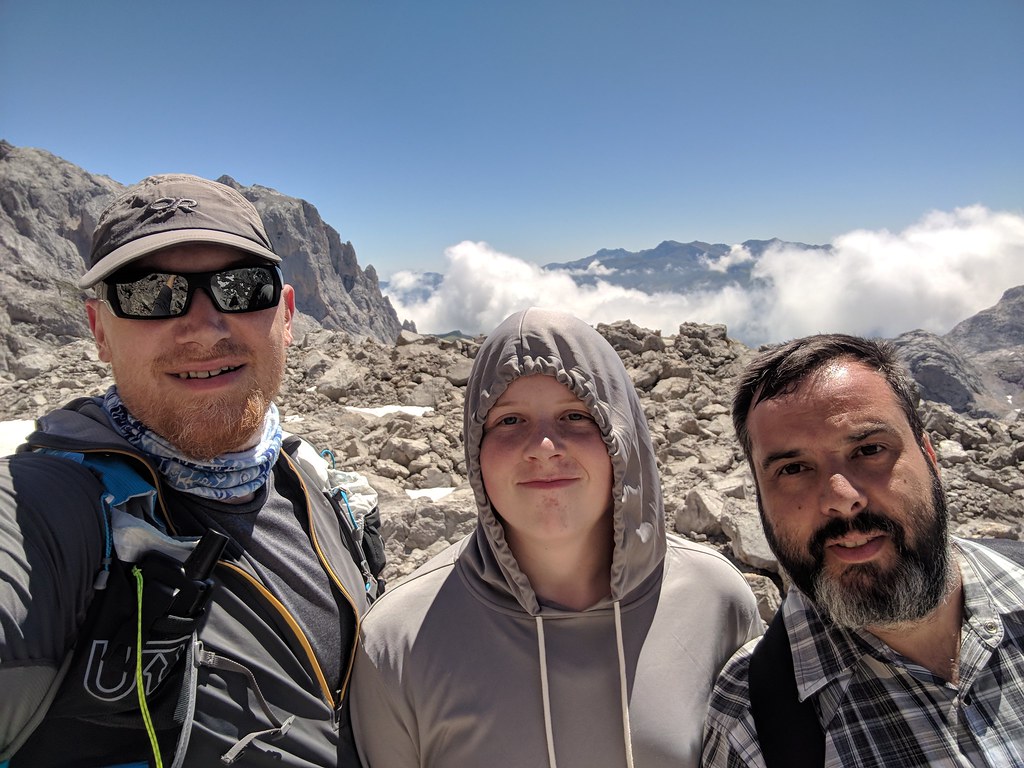 Some wildflowers along the trail on the way back 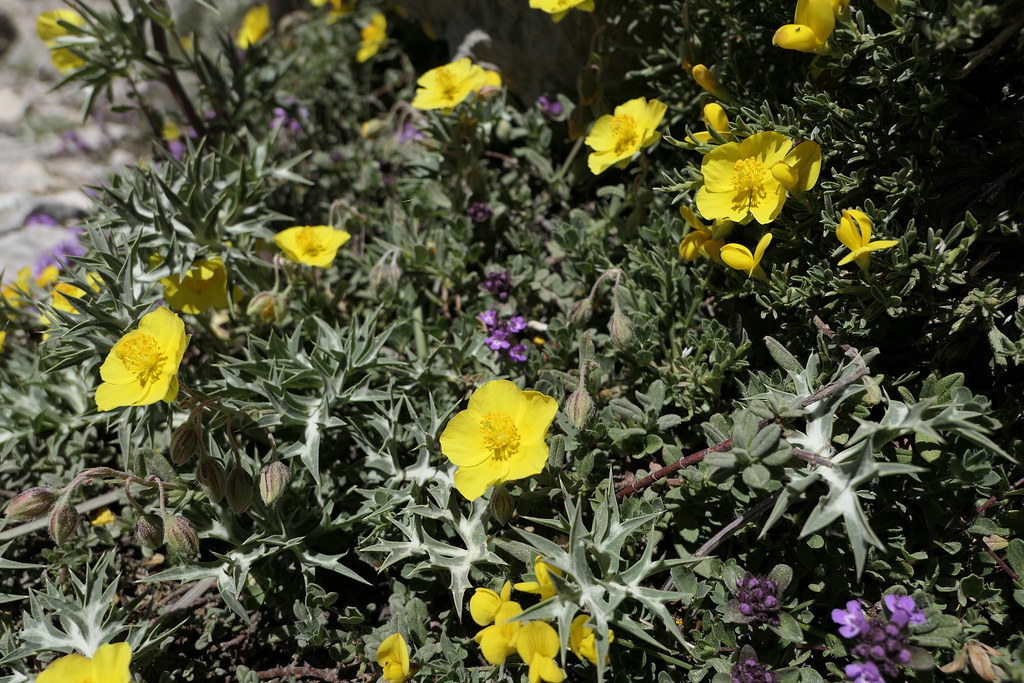 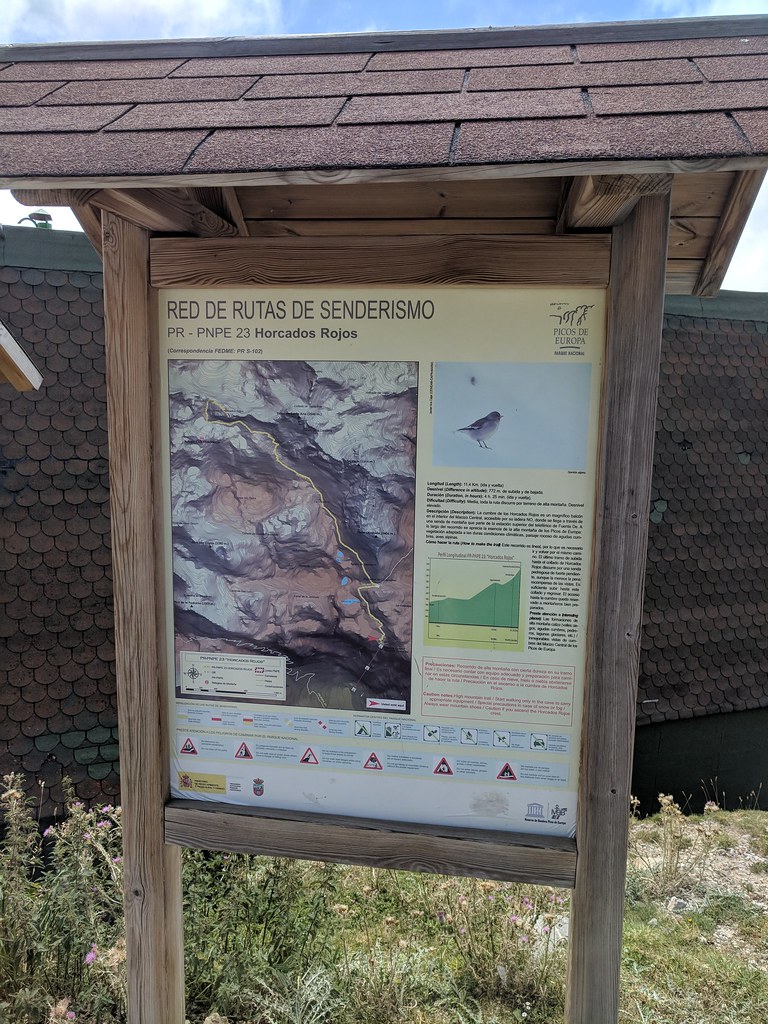 The way down was the same route we had taken up, only downhill this time. We made good time and were back to El Cable for the ride back down by 3:30 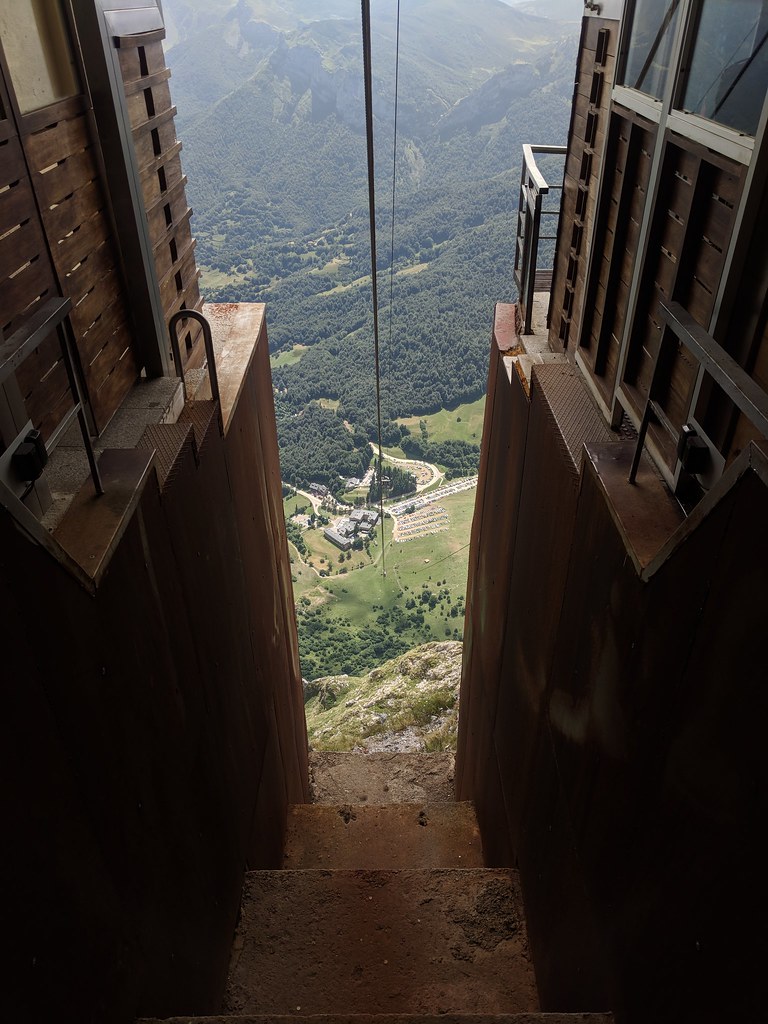 Had a great time and will definitely have to head back and schedule more time to explore the area.