If you've been searching for the best source of information and stimulating discussion related to Spring/Summer/Fall backpacking, hiking and camping in the Sierra Nevada...look no further!
Post Reply
11 posts

I arrived at the Wolverton trailhead on a cold May Saturday morning after self registering at the Ash Mountain station. Quotas were not in effect yet. There were only about 6 other vehicles at the vast trailhead, and almost no traffic on the way up from the south, so my plan to go to this area the weekend before Memorial Day was looking promising. I have never been to Pear Lake, so I was excited to visit a place I have always avoided during the summer because of its reputation for being heavily used. I do remember climbing Alta Peak on a day hike many years ago, but I just vaguely remember looking down on the lakes from the top. I probably have some pics of that trip shot with a film camera somewhere, if they haven't been destroyed by age! Funny how material things that used to be important lose value over time, at least to me.
I spent about 4 hours leisurely walking the 6.5 miles(?) to Pear Lake. I took the route over the Hump instead of the Watchtower route. A sign at the Watchtower trail junction about an hour or so up the trail said the Watchtower trail should not be taken because of snow and ice danger. Now I had talked someone in the SEKI wilderness office during the week who had said noone had been up to Pear since March, and there were no current trail reports, and she thought the snow level was about an average 9000'. I know the Watchtower trail is more scenic, having hiked up to the top a couple of times with my kids when they were younger, but I decided to get the lay of the land first, and then maybe I would take the Watchtower route back to the trailhead on Sunday.
Once over the top of the Hump, there were snow patches, and occasional coverage on the trail to Heather Lake( 4 miles to Heather). The snow on the trail was already broken, but not heavily trampled, indicating just a few people had been in within the last week. Where is the solar toilet that is supposed to be at Heather Lake? I will spare you the gory details.
I spent much time this year attempting to reduce my backpacking baseweight. As I get older, I am experiencing some lower back pain on a regular basis. So it just makes sense for me to reduce the weight I carry as much as possible. There may come a time, if I do not go as light as possible, I won't be able to backpack, which means I will become an super ultralighter, if I have the terminology right. However, I will never not carry toilet paper- that is where I draw the line! My weight for the weekend, including food and water was 20 pounds, but then I added 5 pounds of camera and fishing stuff. But I am getting there......
Heather Lake was very scenic, as was the route from Heather to Emerald Lake, with occasional snow patches to travel on. I checked out the developed campsites at Emerald, and they looked very tempting. The marmots were "eagerly: eying me and I am sure they were hoping I would spend the night. But I decided to press on to Pear Lake, and I am glad I did. The route to Pear was snow free almost until to the turnoff to the ranger's hut, then there was light snow cover up to the lake. However, the trail was apparent most of the way to the lake. I selected a decent, snow-free marked campsite from the few I saw, but in retrospect, the sites at Emerald seemed nicer. 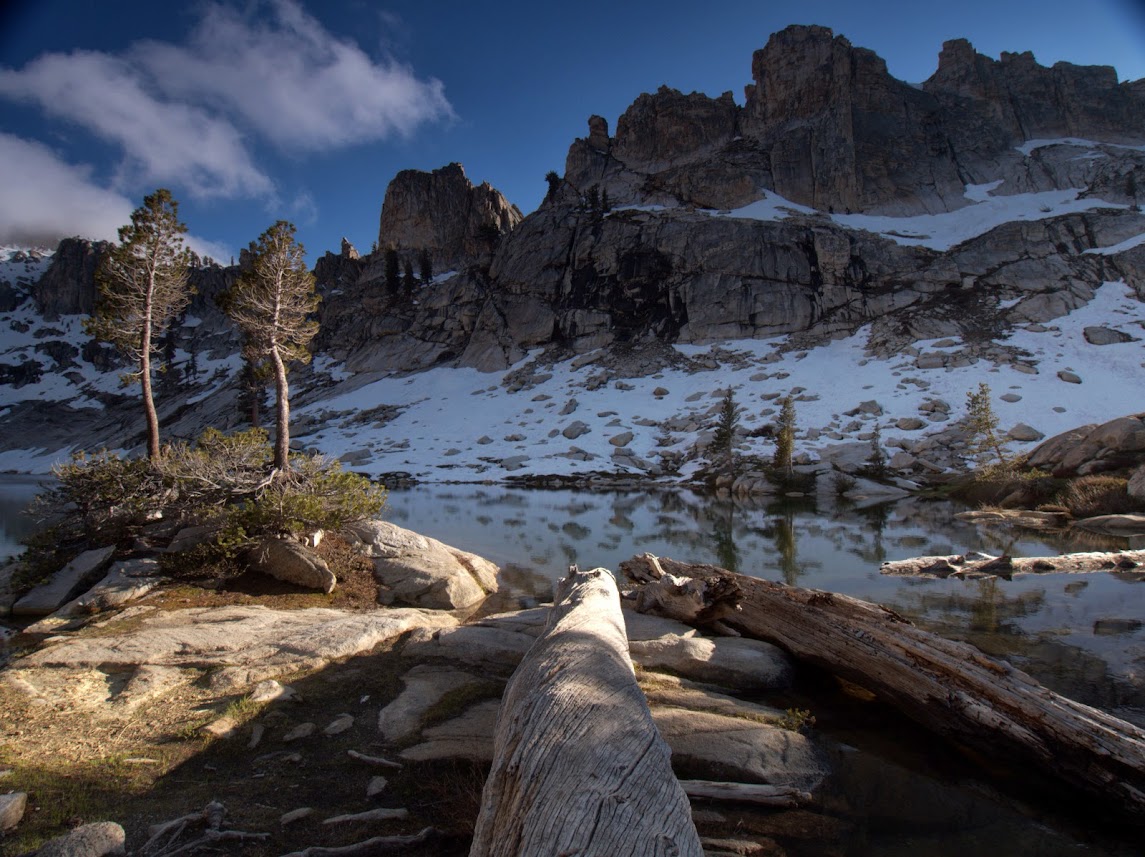 I spent a few hours fishing Pear Lake, and I was pulling in 7-9 inch brookies about every other cast. For some reason, this is about what I expected, great fun, but no lunkers, at least none that hit my barbless lures. This lake has some pretty good dropoffs to some deep water, and I did let my lure at times settle all the way to the bottom, but still just small fish were hitting. I am sure I caught and released a dozen fish or thereabouts. I did enjoy a couple of pan sized fish as part of my evening meal. 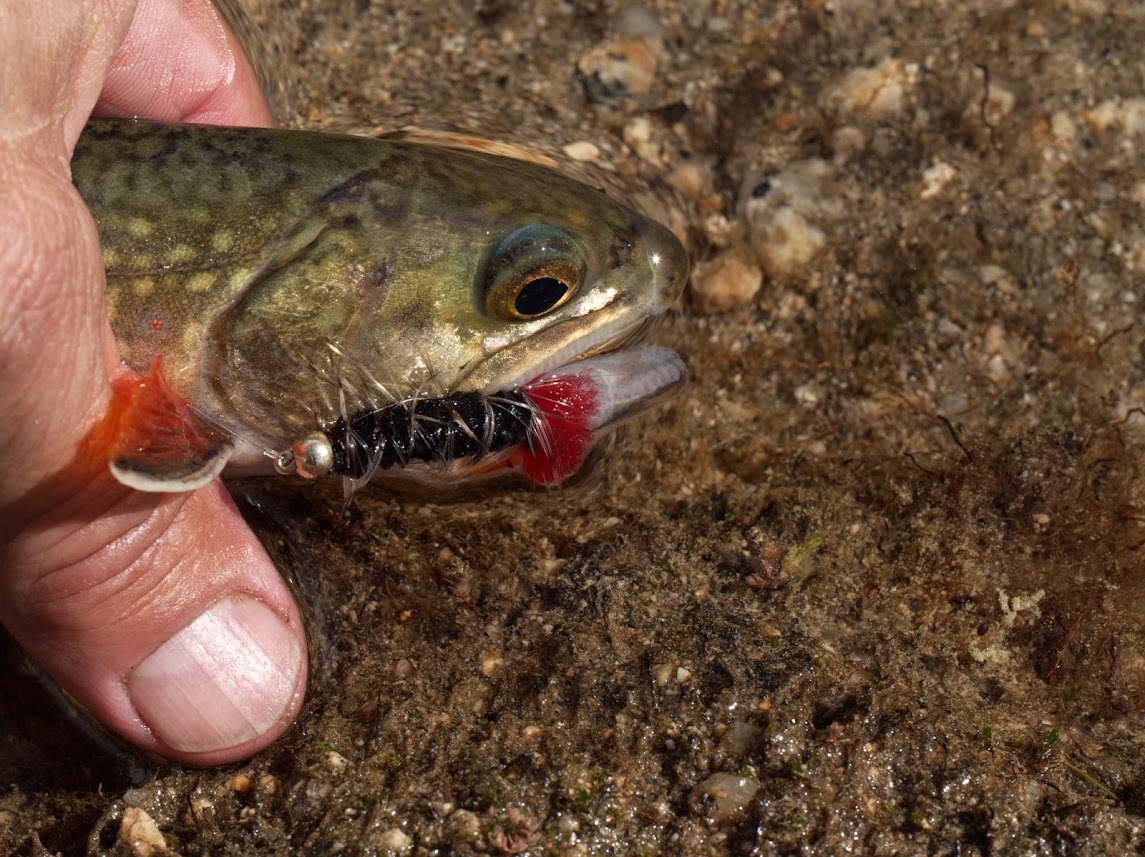 This is a very photogenic spot. I can see why people love to come here. It was a cold night at Pear Lake. I was in the sleeping bag by 8:00, despite between warmly dressed. Many ultralight advocates insist you only need a 32 degree bag in the Sierra, but I don't regret having my WM 20 degree down bag along for this trip! I am quite sure it got down to 20 by 2AM, but I was quite comfortable. 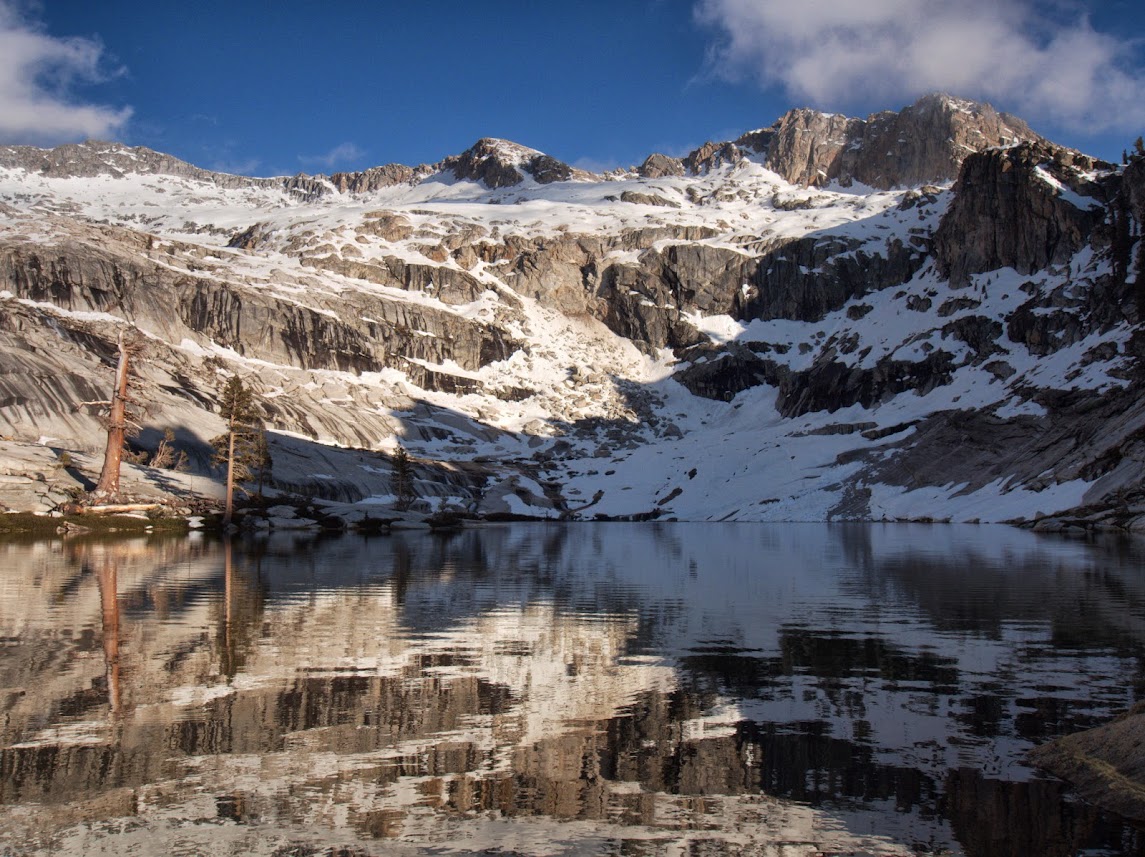 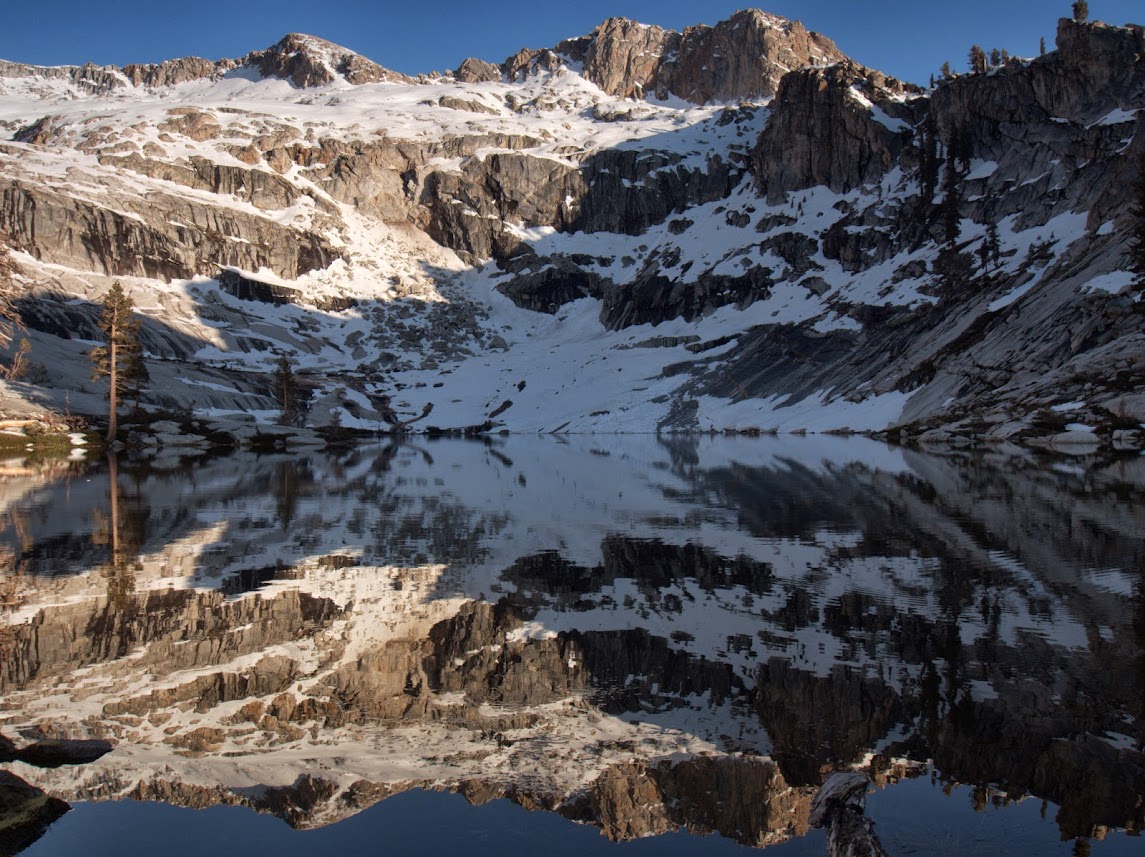 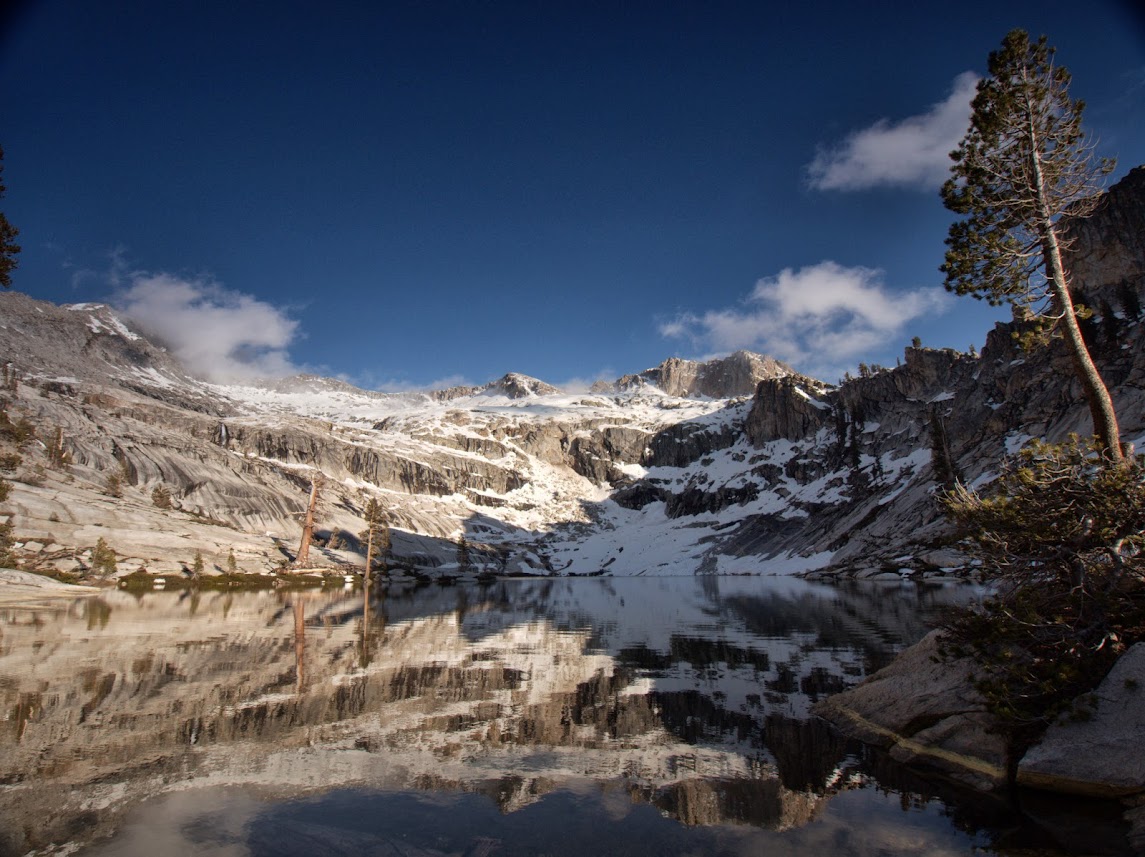 The next morning it was warmer. I had located my tent so it would receive the morning sun, and I did not need my jacket after 8am. I decided to pack things up and head down to Emerald Lake, and try and get some photos before it got later in the day. This lake is smaller than Pear, but it is quite beautiful. I regret not getting off my butt, and getting to this lake a couple of hours earlier in the morning, when the light would have been a little softer to the eyes and the camera. The fishing was about the same as Pear, except they were hitting on almost every cast. These lakes seem like they would be great places to take kids, or someone you wanted to make sure caught something. Lots of pan sized fish, and fun to catch. 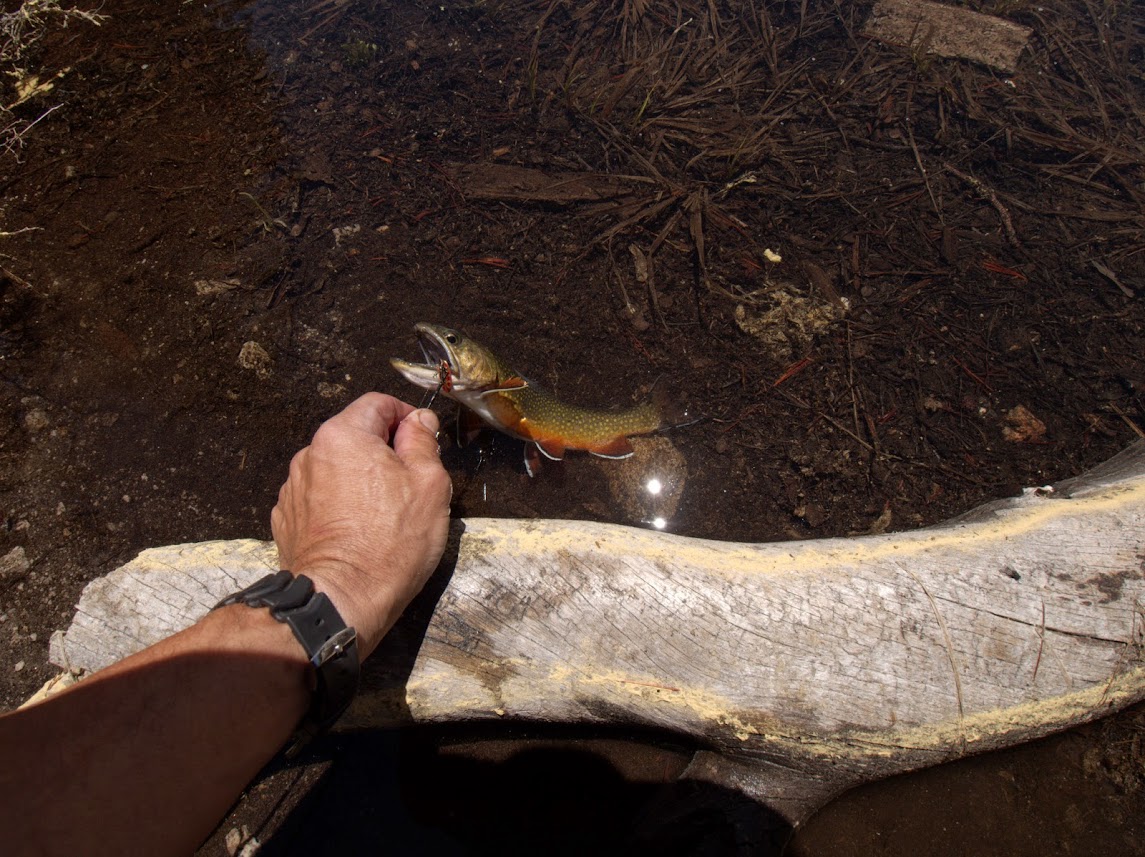 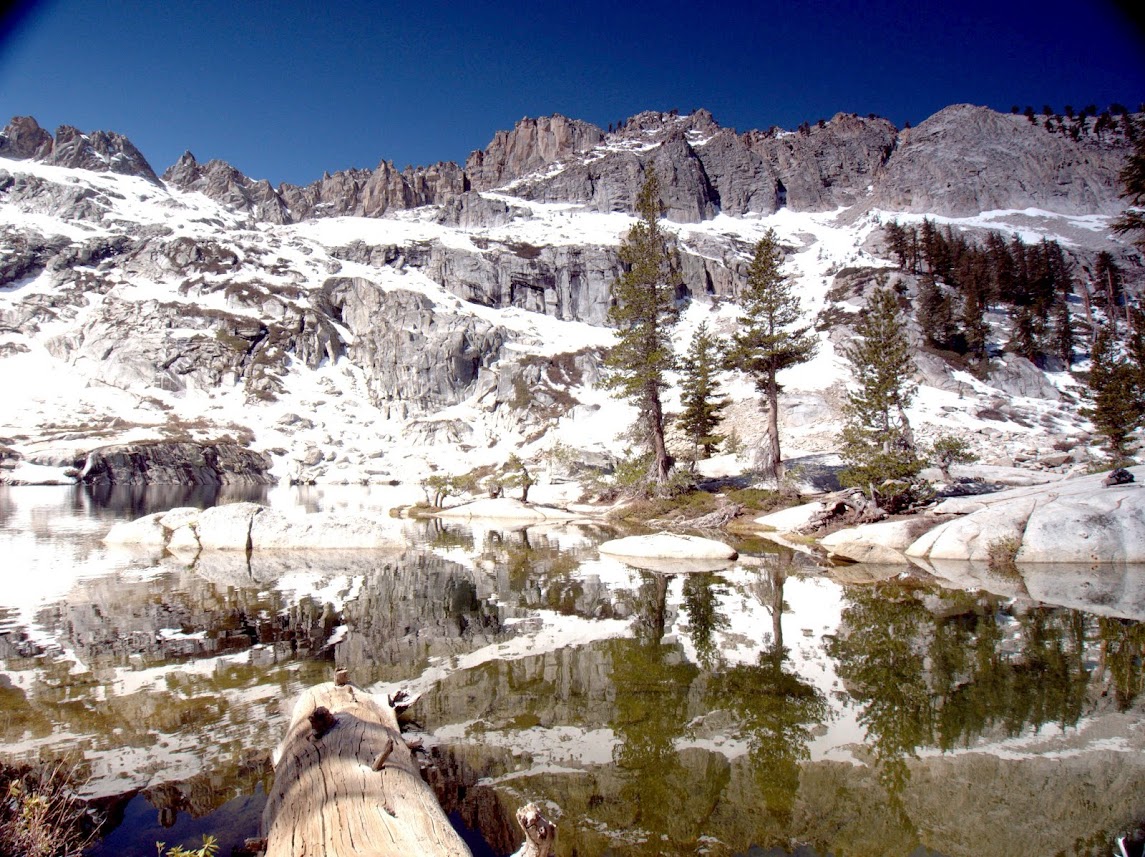 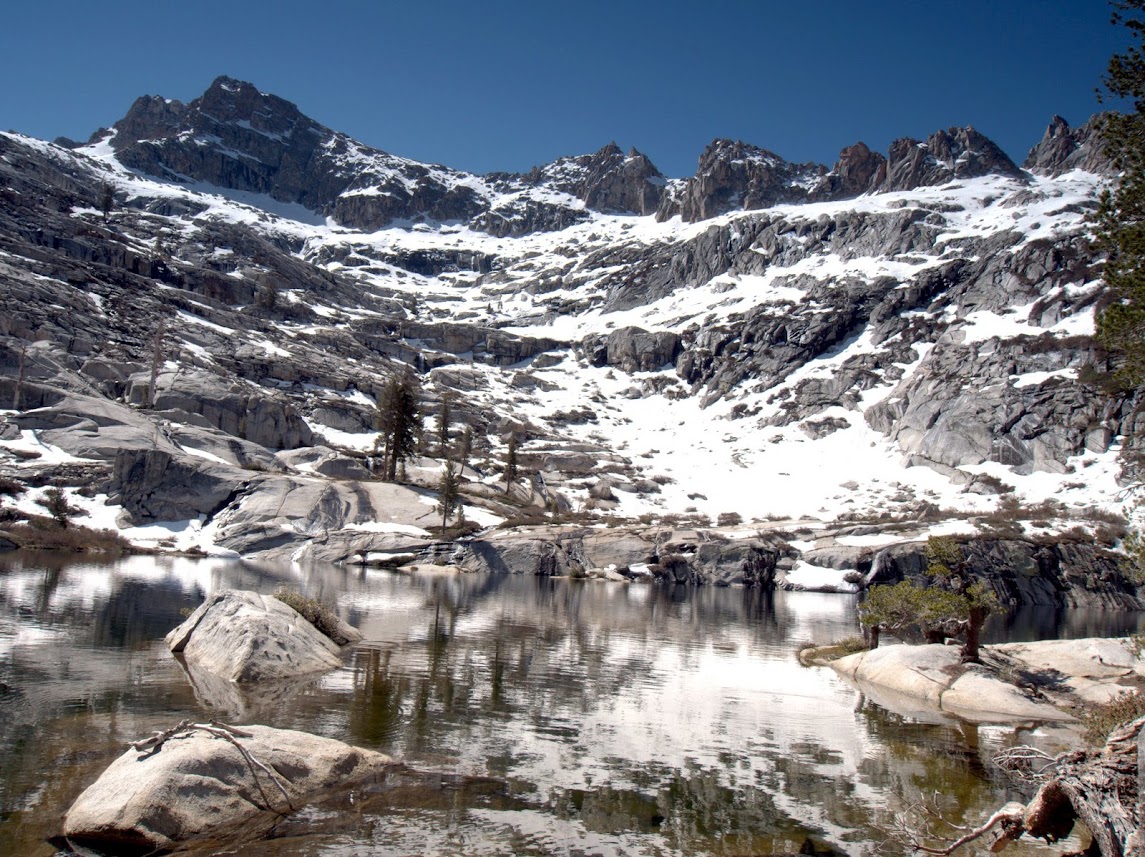 I rambled on down to Heather Lake, and the fish were still rising to the surface even though it was midday. I found the fishing here best, landing a couple of 10 inch fish, and the average size was about 8-9 inches, and a bit fatter. Perhaps this lake has been iced out a little longer than Pear and Emerald Lakes. It was hard to break away from the fishing and scenery, but after a couple of hours, it was time to head out. There was a small group of younger folks here lounging on the rocks, so I had a small, but seemingly uninterested audience. The water was very clear, and at times I could see the fish come up to the lure, and I would set the hook before they took it for themselves. Great fun...I don't usually count fish, unless I am getting skunked, but if I said this was a 30 fish weekend, that would probably be about accurate. Nothing to brag about but the scenery!
When I headed back, I stayed to the right, and took the Watchtower trail back to Wolverton. There were more drifts, and snow here than any other area of the trail I walked. If the snow would have been hard and icy, I probably would have turned back, with the exposure of the trail, and no ice axe or spikes on this trip. But I just kicked steps in the soft snow, and obviously made it, since I am writing this trip report. It looked like 1-2 people had also gone this way in the last week. I would probably say in retrospect that it would be safer for people to wait for some more snow to melt on the trail between Heather Lake and the Watchtower. The Wolverton downhill side of the trial was clear of snow except for a few small patches. 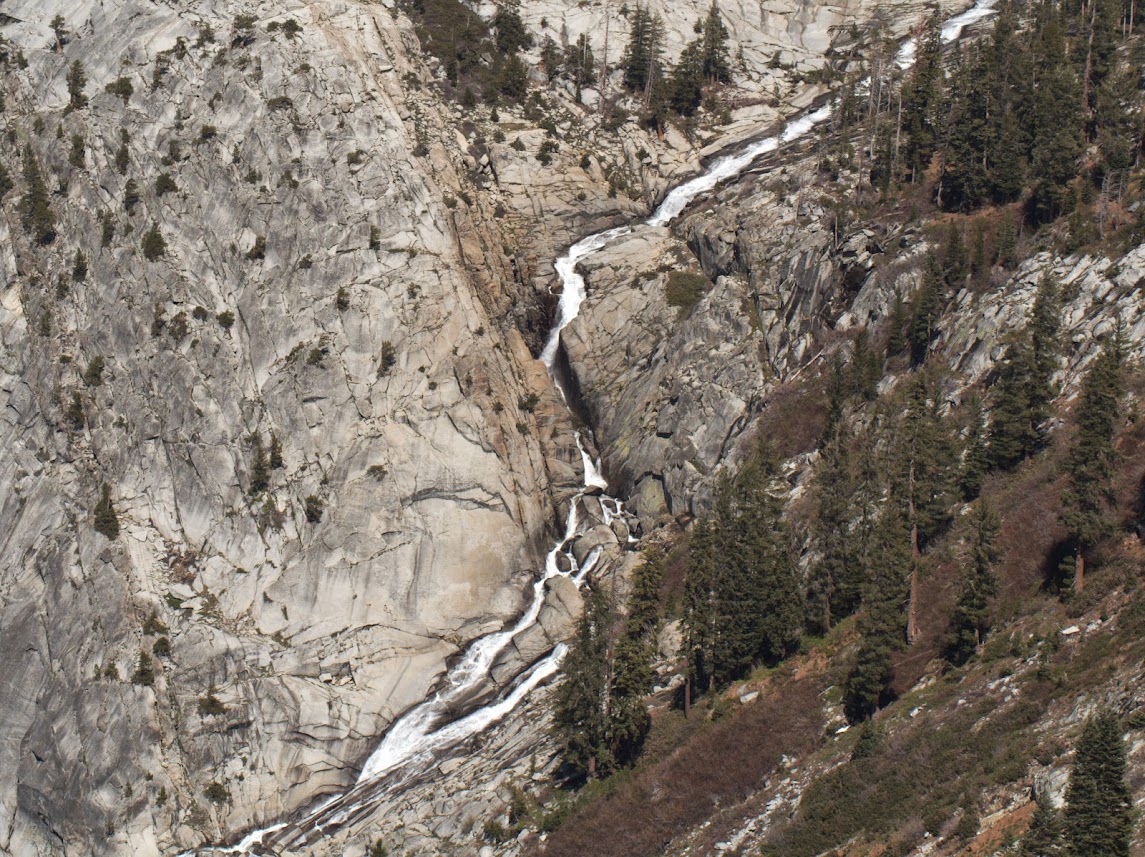 This was a very nice trip, very uncrowded conditions, weather a little cold Saturday, but definitely no complaints from this hiker.
Last edited by richlong8 on Sat Jun 01, 2013 8:09 pm, edited 1 time in total.

Thanks for the wonderful Tr and pictures. Solar toilet has been at Pear Lake, and
can get quite filthy during the summer months when folks throw garbage, used
toilet paper all over inside of it, would rather hike a distance than to use it.
Professional Sierra Landscape Photographer

Wonderful pics and TR. I have skied up there but never hiked it. It is just as beautiful with a little bit of snow as it is in the winter. Nice that you had the place to yourself most of the trip. Beautiful fish too.
Top

Thanks for posting the TR and great photos. I am actually impressed that amount of snow in the photos still remains. I was up near Alta in April and the conditions then were "ankle breaking" snow and ice where the trail would be otherwise. Still, hardly much snow on the other side of the hill from Pear Lake.
Top

Nice report and beautiful photos! I haven't been up there in decades.
Kind of off topic, but what do you think the snow is like on the Tablelands now?
-Scott
Top

Ska-T wrote:what do you think the snow is like on the Tablelands now?

Thanks for the TR...good to get a glance on the conditions down there. Some great pics too!
Top

Thanks for the interesting TR. It sure was cold up there on Saturday night! Those brookies are really fun to catch. It is nice to enjoy a few for "desert". I even packed out a few so Maverick could enjoy the taste of wild trout.

Thanks for the beautiful pictures.

-Russ
"...Or have you only comfort, and the lust for comfort, that stealthy thing that enters the house a guest, and then becomes a host and then a master?"

I am so there on my days off. So pumped for the season to get started.
Top

Welcome to HST!
Hope to read about you adventure when you get back in a TR with pictures.