Discussion about winter adventure sports in the Sierra Nevada mountains including but not limited to; winter backpacking and camping, mountaineering, downhill and cross-country skiing, snowboarding, snowshoeing, etc.
Post Reply
12 posts 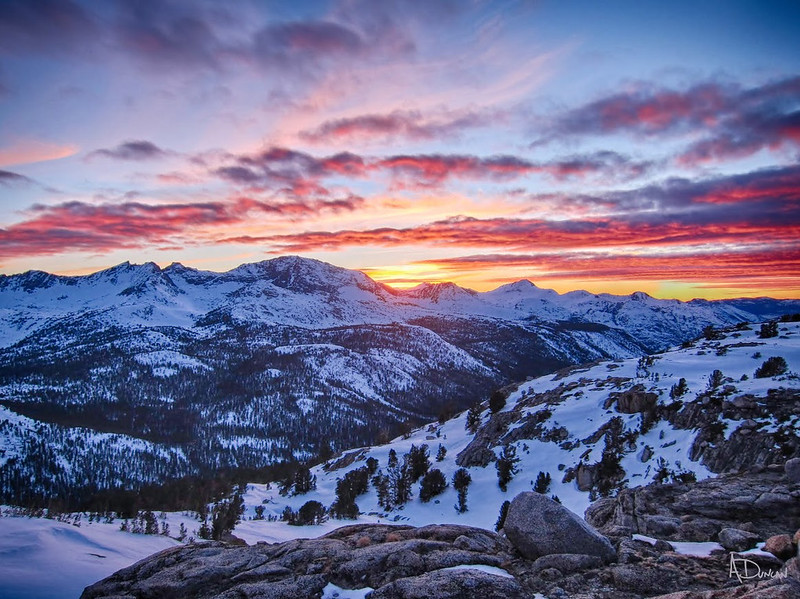 Every winter I get cabin fever. I start to dream about routes for the next summer and re-live past adventures while pouring over photos and videos. After a while I find myself wanting to get into the backcountry but waiting months until next summer is just too long.

So a few years ago I started embracing the fourth season. After a few seasons a small group of my backpacking buddies started to join the winter crew and before long we had a annual snowshoeing trip.

But last year I struggled to keep up after barely getting over a nasty cold right before the trip. I watched from behind as everyone else strolled up the 2,000 foot climb the first day. I was the slow guy that my friends politely waited for. I was sure they were really thinking something like, "no problem dude, we'll take yet another break so this sorry slow screwball can catch his breath".

This year I resolved not to let the gluttonous trifecta of Thanksgiving - Christmas - New Years get the best of me. I spent hours on the local coastal trails building my cardio base. After countless lunges, squats, crunches and overnights at altitude in the local mountains I felt ready to conquer the High Sierra again.

This trip was originally going to be a solo training hike for the annual snowshoe trip this spring, but when a last minute long weekend opened up Alpine Mike was able to join me.

After camping in the Buttermilks the night before (and Mike at the gate above Aspendell) we got started for a four day trip over Lamarck Col and as far into Evolution Basin as possible.

Evolution Winter Route 022016.JPG
A few years ago I got stuck at the top of the switchbacks above Lamarck Lake on the way down from Lamarck Col in the snow (see: http://seatosummitultralight.blogspot.c ... lpine.html). After that trip I read about a winter route via the Grass Lake drainage that is much easier (and safer) in the winter, so part of the goal of this trip was to investigate this new winter route.

The road to the North Lake trailhead is closed in the winter, and a road walk from the gate above Aspendell is needed to reach the actual trail. It wasn't long before we reached the trail leading to Grass Lake. 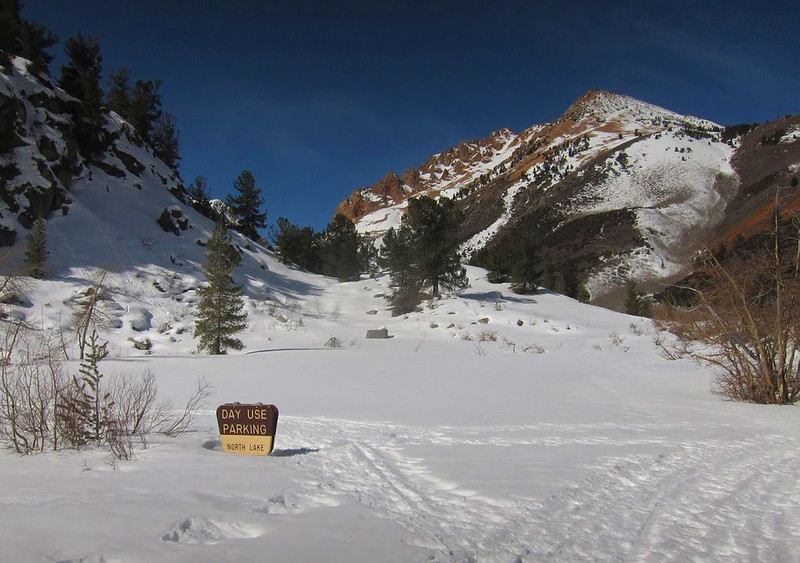 Road walk to the trailhead: 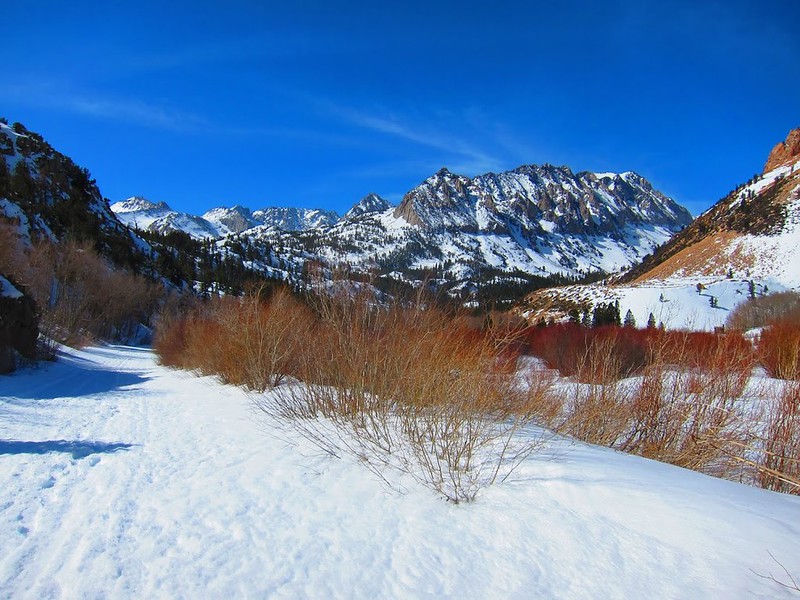 We followed some ski tracks through the trees and up to Grass Lake: 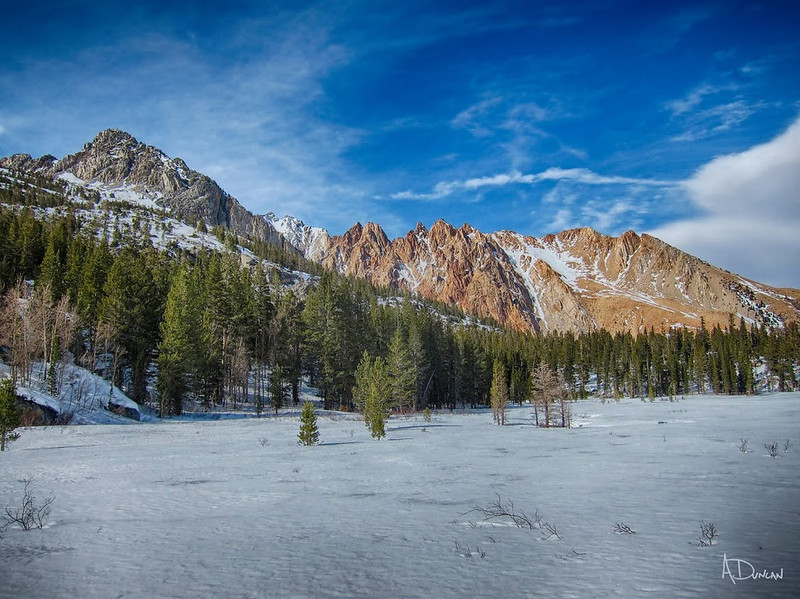 The route up from Grass Lake winds through the trees and starts to hint at the steep terrain ahead. 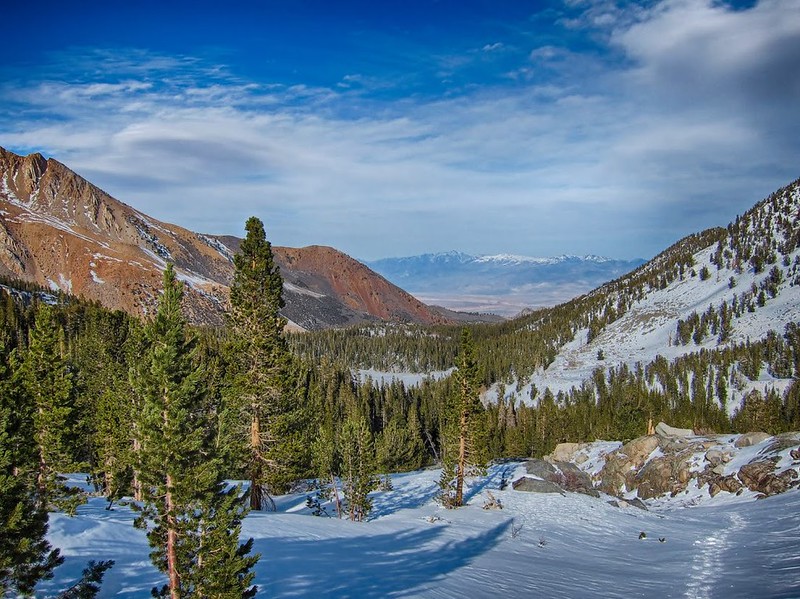 After six hours of breaking trail through 6-12 inches of snow we met a couple on their way down from Lamarck Col. They were finishing the snow survey and were having a great time skiing downhill from the col. They warned of the steep chutes ahead so we decided to call it a day and setup camp at around 4:30 pm. 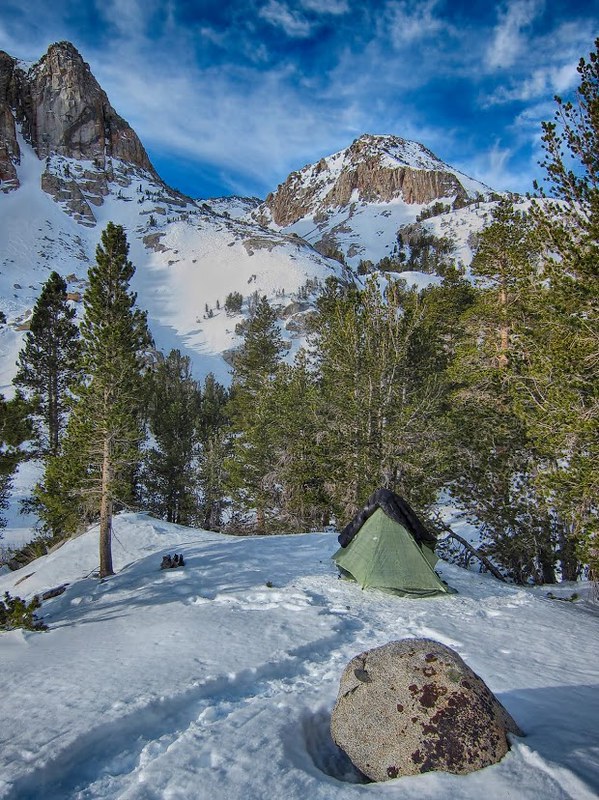 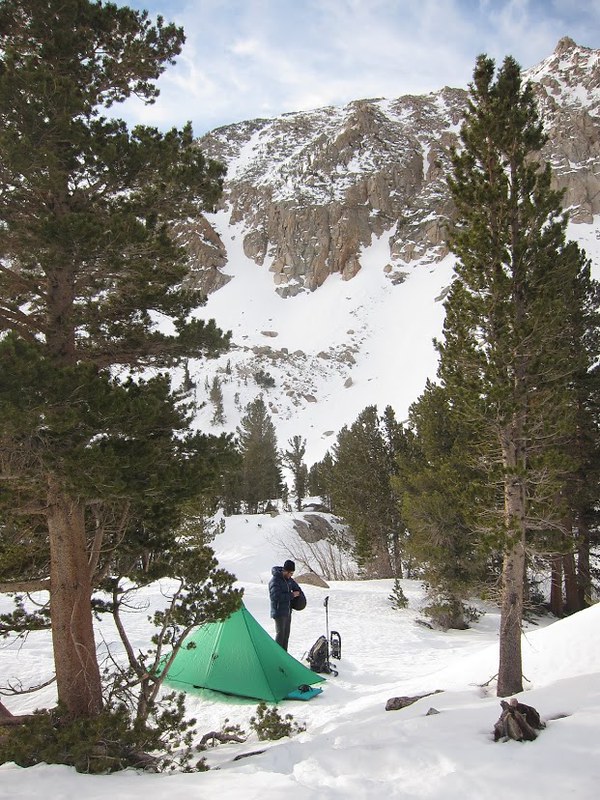 The next day we started the final climb to Lamarck Col. After climbing a series of steep chutes and braving wind blown snow we made it to Lamarck Col. 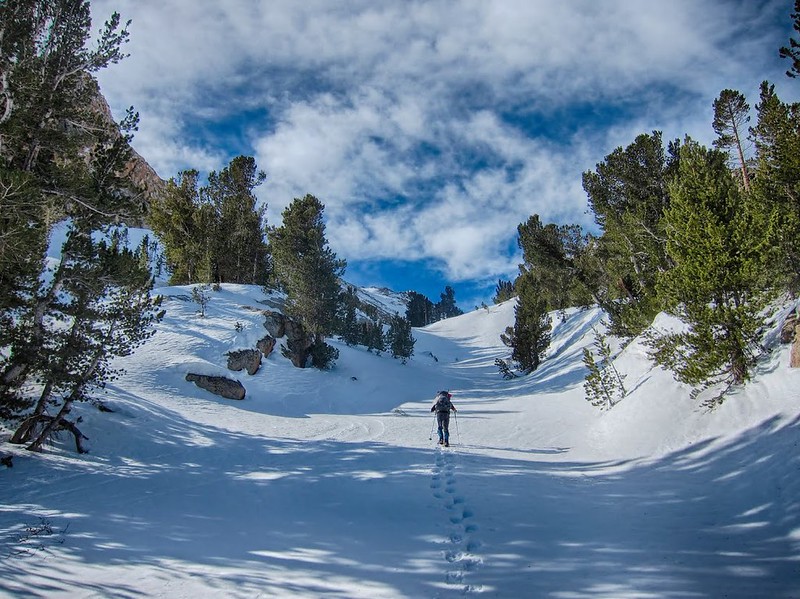 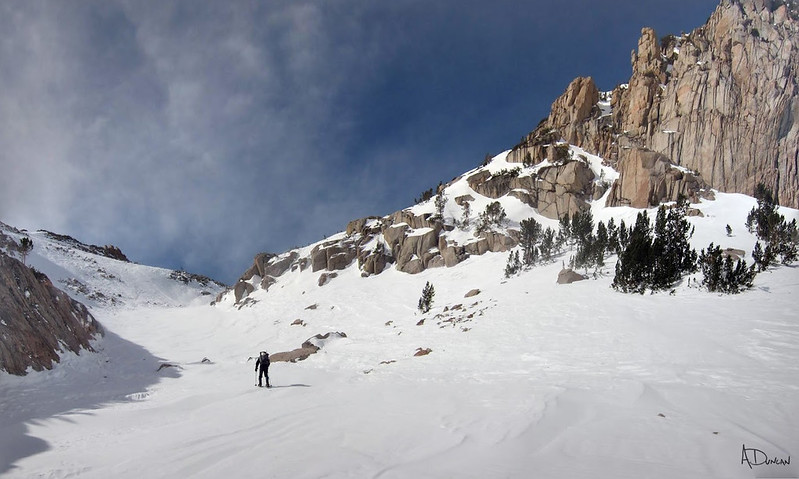 After climbing the steep chutes we arrived at the more reasonable plateau that leads to the col.

The climb up the final wall of Lamarck Col was steep and I was a little concerned that we might destabilize the 30 degree slope. Fortunately it held and we made it to the top! 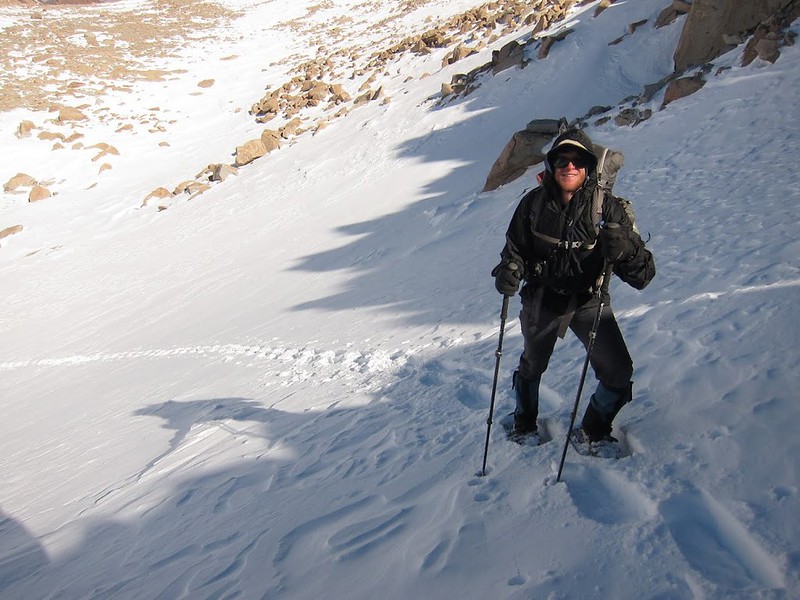 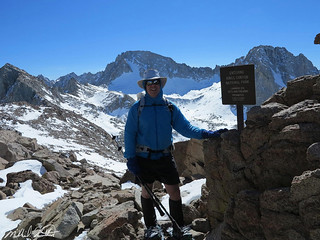 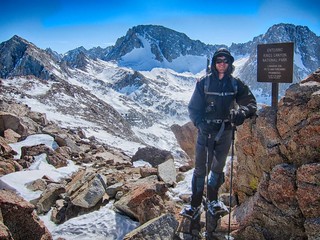 The heavy winds must have cleared the snow off of the boulders near the top because we were able to follow the well constructed use trail for a while on the way down. Soon the slope was mostly snow which made for easy plunge-stepping to the canyon below. 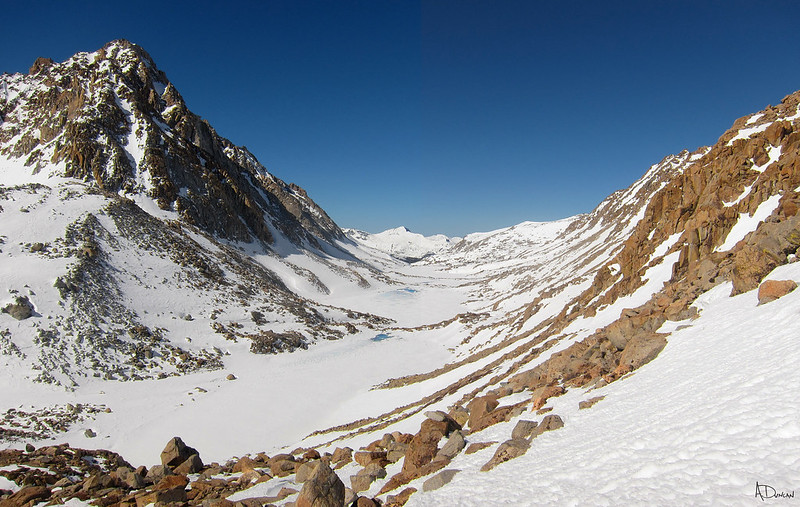 After six hours we made it to Darwin Bench and setup a base camp for the next two days. We relaxed and enjoyed the beautiful views across Evolution Valley while melting snow for dinner. Alpine Mike generously shared tales of his summer adventures with Rogue Photonic. 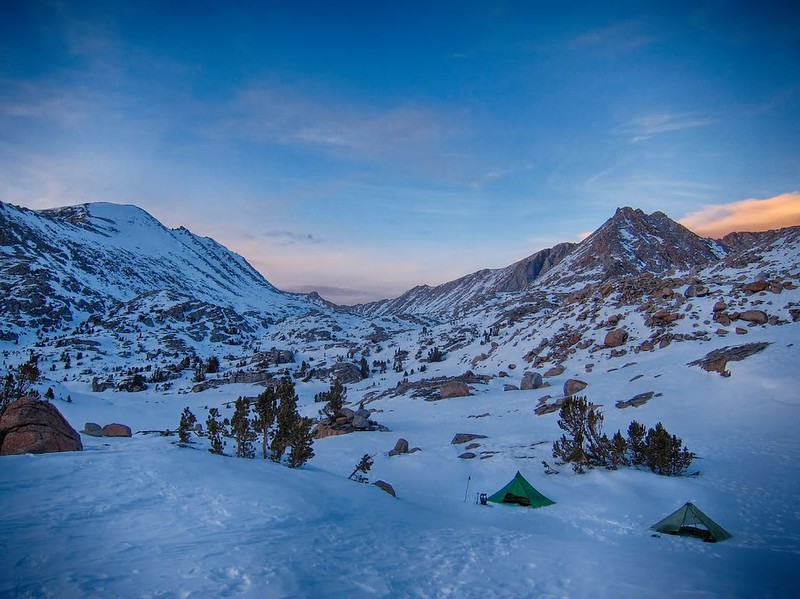 Dinner on the bench: 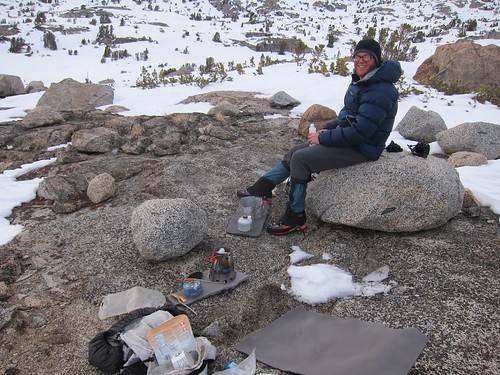 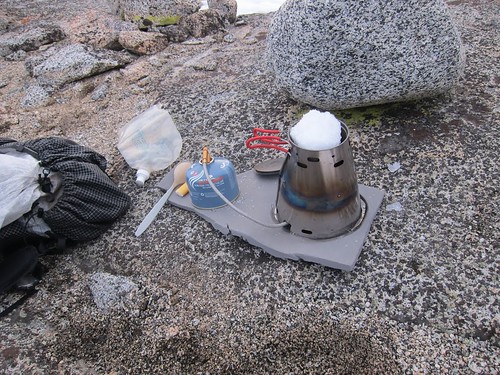 Dark clouds rolled in after sunset but only produced a few snow flakes. Nighttime temps got down to about 17 F that night.

This was the day I had been looking forward to. An entire day to explore Evolution Basin in the snow. Although the day started cloudy and cold the weather eventually cleared and we got some epic views of the Evolution peaks. We started by contouring around the based of Mt. Mendel toward Evolution Lake.

The outlet of Evolution Lake was starting to melt: 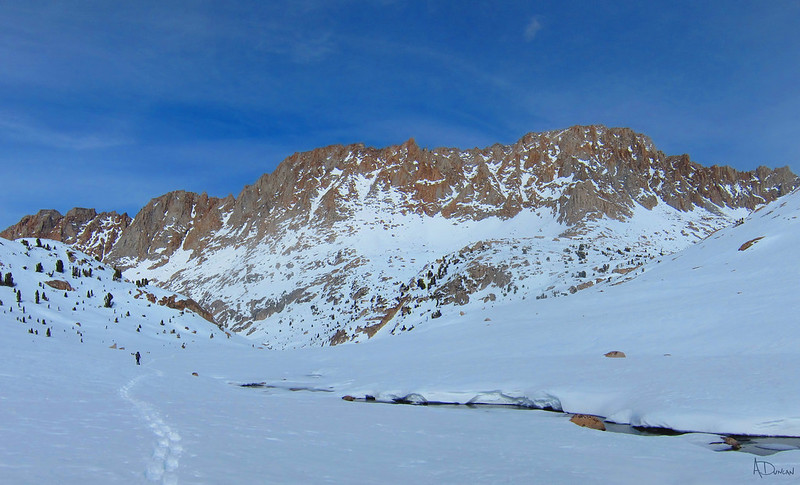 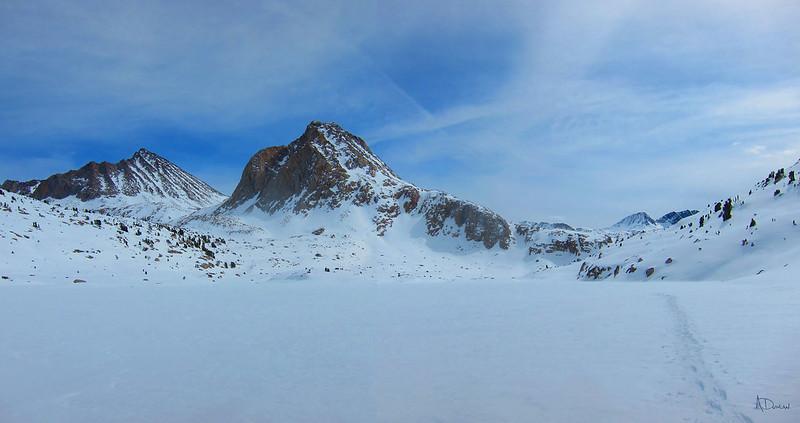 On the way back to base camp: 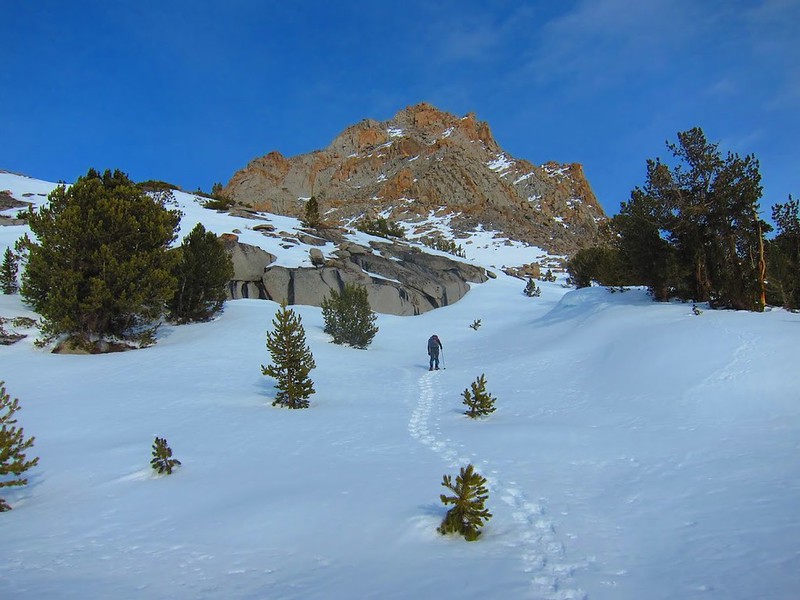 The last night on Darwin Bench: 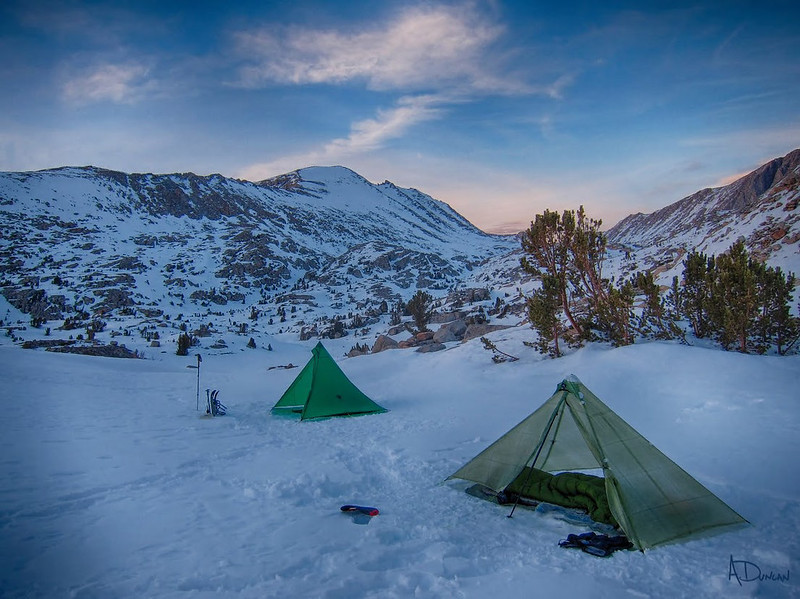 I woke to Alpine Mike saying, "it's 10!". It took a while for me to realize what he was talking about. Eventually the fog of restful sleep cleared and I realized he was talking about the temperature. I was relieved to know my winter gear was warm enough to stay comfortable down to 10 F. I had slept like a baby and actually slept through the three alarms I set the night before.

The reason for my relief was that I had removed about 4 ozs of down from the upper half of my custom (aka: homemade) winter quilt before this trip. Since I brought a warm Montbell Mirage down jacket to wear around camp I figured the extra down wasn't necessary if I used the jacket as part of my sleep 'system'. Fortunately the experiment worked. (For details check out my Winter Sierra Gear List ~ 2016 here: http://seatosummitultralight.blogspot.c ... -2016.html).

We had agreed to get an early start to allow for plenty of time to get back to our cars before dark. We had about 12 miles to cover, which under normal conditions is a nice half day of hiking, but in the variable snow conditions 12 miles could take 12 hours.

After thawing out my shoes (they were frozen solid each morning) and quickly packing up we set out to cover some easy ground over the frozen lakes in Darwin Canyon. 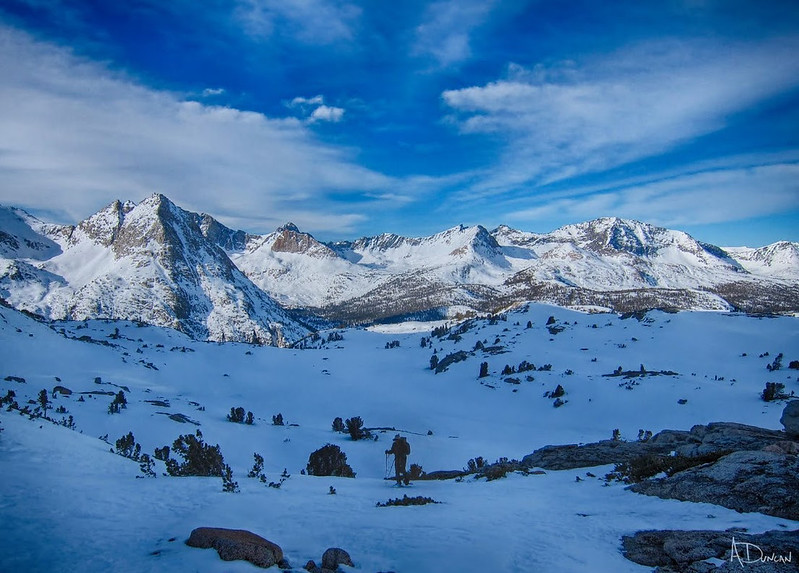 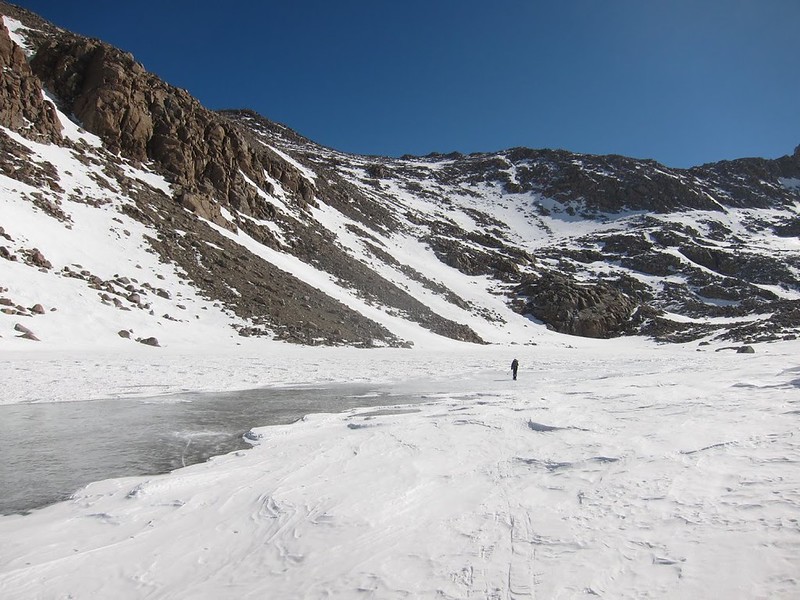 Almost at the top: 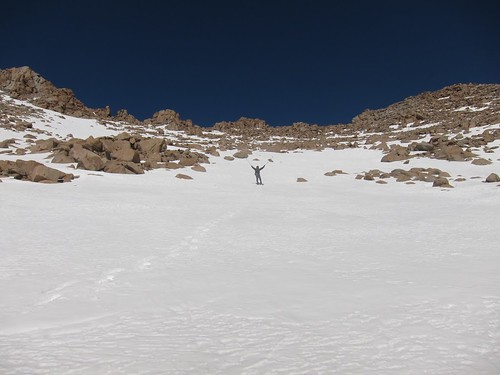 After reaching Lamarck Col the rest of the day was downhill. We took advantage of the steep slopes and glissaded much of the way back down the east side winter route. 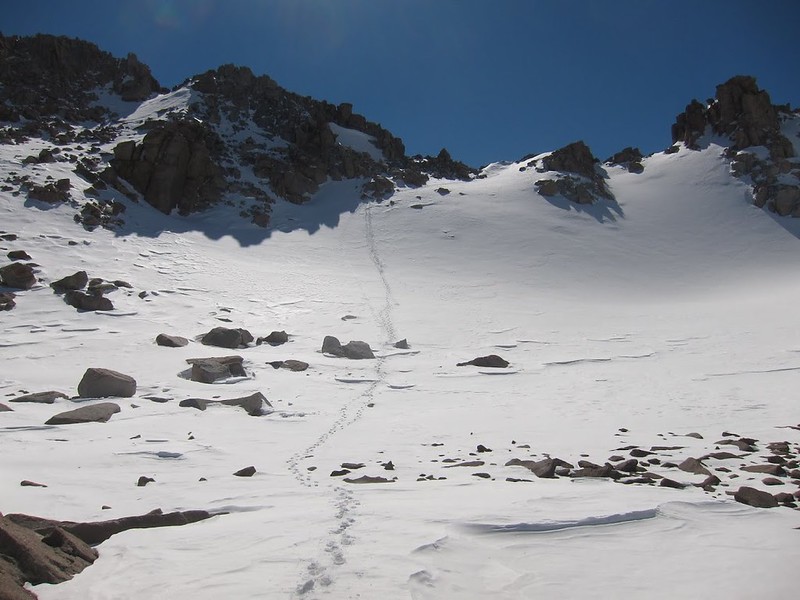 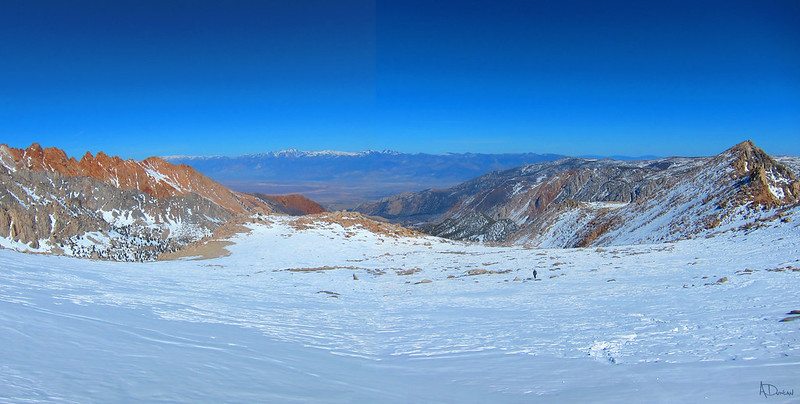 Relief after making it down the steepest chute: 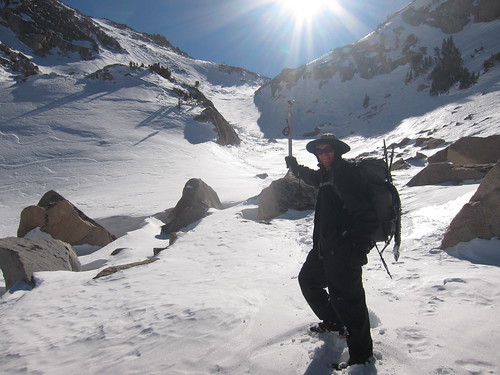 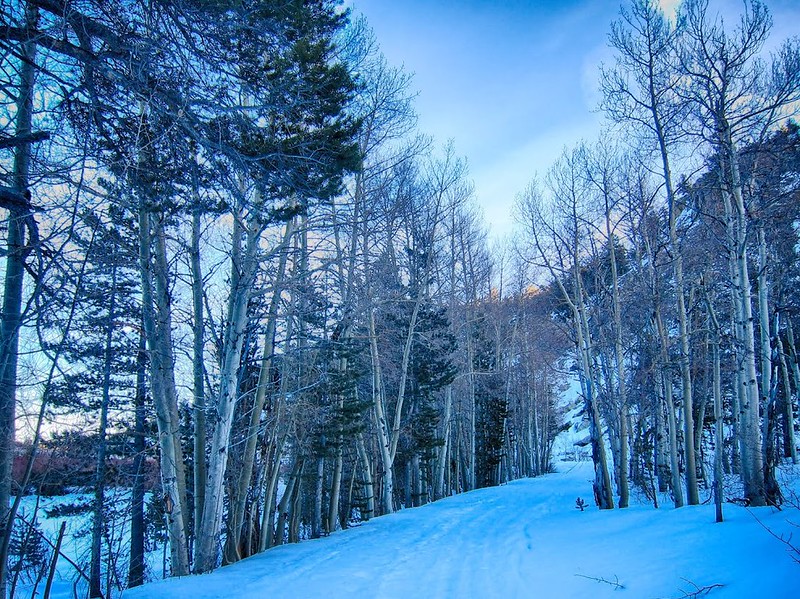 Most of the way down was easy, but by the end of the 10 hour day we were feeling beat. The last few miles through slushy unstable snow made for some challenging ankle twisting moments. . . as if to remind us that nature was still in charge.

Many thanks to Alpine Mike for breaking trail and helping to make this a memorable adventure.

If you're interested I did a trip report with more photos, route details, maps and some videos here:

http://seatosummitultralight.blogspot.c ... -2016.html
You must be registered and logged in to view the files/photos attached to this post.

You were right, that sunset from the Bench is fabulous BW. Great trip, 3 alarms, that is funny.

Mike, how did your La Sportiva Trangos work with snow shoes? Did you take crampons along just in case?
Top

Hi Hobbes. They worked great! This was my 3rd trip using them for extensive mileages and they are without a doubt my favorite piece of winter gear. So light and comfortable and as long as I don't go tromping in the snow in them completely over the boot my feet stayed super dry. Andy and I discussed the necessity for crampons and decided since he didn't have any that I wouldn't need to take mine. I have used a pair of Grivel Air Tech Lights with them and they worked out very well.
Never put off a backpacking trip for tomorrow, if you can do it today...
Alpine Mike-

It seems like everyone has the Trangos. After trying on multiple pairs in different sizes, they still felt a little tight for me. I ended up getting the Scarpa Charmoz which seem to be made for wider feet. (My feet are pretty wide, which is why I love the Altra Lone Peaks.)

Andy & I have been toying with the idea of doing a Lamarck->Kearsarge trip down the PCT in either late May/early June. If we go in May, I'll take the Scarpa + BD crampons, but if in June, then maybe the Altras + micro-spikes. I've done 10-12 mile (dry) hikes in the Scarpa, which is pretty good for a semi-rigid sole, but I can hike all day in the Altras. I guess the key (if early June) is whether the the snow over the passes will still require lateral travel and/or kick-stepping. If so, then definitely crampons - I'll just have to deal with perhaps lower mileage.

Andy, how much down do you have in your quilt? I originally had 12oz of 900FP from the Thru-hiker kit, but bought & added 3oz more. The fabric weights 5 oz, so around 20oz for what I consider a 25 degree quilt. Then again, you're out there in shorts, so maybe you're the wrong guy to ask - LOL.
Top

Andy was telling me about that trip. Getting up Lamarck will be interesting again.. as that was one hell of a long slog with a lot of gain. Given the status of our average to above average year I wouldn't be surprised if snow conditions were quite extensive in late May/early June. The necessity for crampons given that you have snowshoes is definitely going to be hard to judge. I would definitely plan on some slow days if there is still a good deal of snow. It may take close to a week .. to do that trip.
Never put off a backpacking trip for tomorrow, if you can do it today...
Alpine Mike-

I started with about 17.5 ozs of 900 fp down and 6 ozs of material (23.5 ozs total) with about 2.75" to 3" of single layer loft throughout. Removing 4 ozs of down (from the upper half only) brought it to 13.5 ozs of down, effectively making the upper half of the quilt more of a 35-40 degree rating. The Mirage has 2" of loft with fully baffled construction (no sewn through seams) so with a combined loft of 3"+- on the upper half I was ok down to 10 degrees F. I was wearing a synthetic s/s t-shirt, silk sleeves and a Houdini under the Mirage.

All this is subjective. I wear shorts in the snow so YMMV:)
Top

Nice! That's quite an adventure. Thanks for sharing.
Nature Focused Photography
Top

Thanks for your feedback everyone!

Teresa, thanks for the tip about putting my shoes in plastic bags and keeping them warm in my quilt. I'm going to try that next time:).
Top
Post Reply
12 posts