Discussion about winter adventure sports in the Sierra Nevada mountains including but not limited to; winter backpacking and camping, mountaineering, downhill and cross-country skiing, snowboarding, snowshoeing, etc.
Post Reply
5 posts • Page 1 of 1

We had this area in mind as a possible shoulder season backpack, but due to fresh snow, strong winds, and wind chill, opted to lighten our loads some by doing two dayhikes with ample peakbagging. Album here: https://goo.gl/photos/n2BHLVF2SXrDv5L19

A few inches of fresh snow had fallen overnight, but generally the snowpack was very patchy at 7,000 feet, more consistent by 7,500 feet, and 1-3 feet deep above 8,000 feet. Some non-forested, west and south facing areas were completely melted out at summits near and above 9,000 feet.

We utilized Spooner Lake parking on the morning of Day 1 for $10 and started hiking on North Canyon Road. This parking fee can be avoided by parking along Highway 50 at or near Spooner Summit TH and walking to Spooner Lake or hiking the Tahoe Rim Trail. The fee for walking in is currently $1 and biking in is $2. 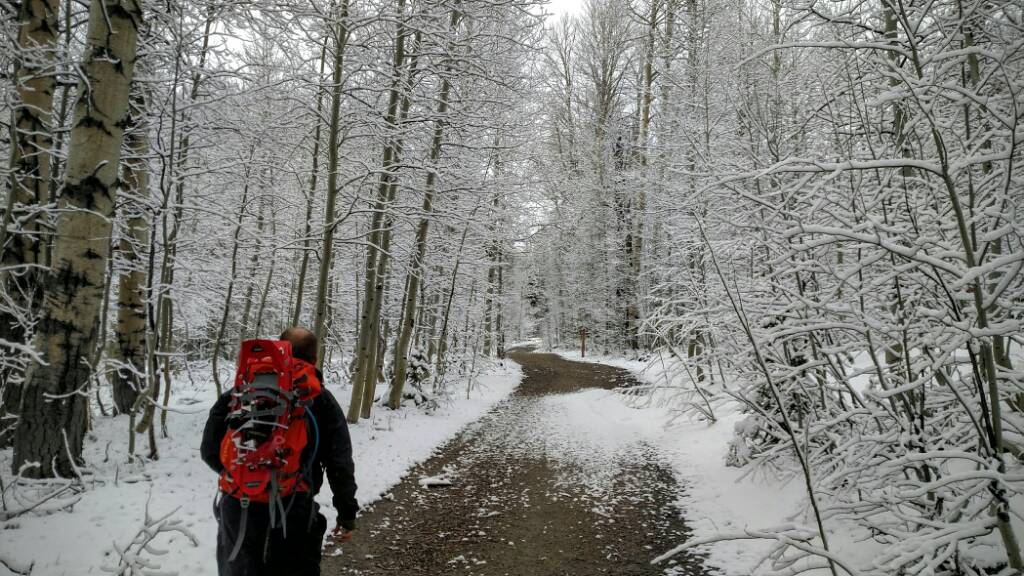 As snow deepened and softened, we donned snow shoes a few miles in and tagged enshrouded Peak 8728 with hopes skies would clear some as forecast.

We continued to partially thawed Marlette Lake (7823) and then roughly followed the route of Hobart Road before striking off cross country to roughly follow a 4x4 road south and then east of Hobart Reservoir to Peak 8208 and Peak 8205. Skies gradually cleared some, and by early evening we reached Snow Valley Peak with partly cloudy skies.

Snow was generally consolidated enough all day to leave snowshoes behind, but was soft enough to posthole a couple inches (more at times) and be a bit energy sapping.

After a long first day, we tested our energy level Sunday morning by parking at Spooner Junction to hike about two miles round trip and tag Captain Pomin Rock.

Feeling decent, we headed north and parked along HWY 28 across from Tunnel Creek Cafe (Old Ponderosa/Bonanza area) at the south end of Incline Village for our longer Day 2 hike. We joined mountain bikers, trail runners, and dog walkers admiring views of Crystal Bay as we walked up Tunnel Creek Road (dirt) before striking off in snow to tag Herlan and Marlette Peaks. Upon reaching the junction with the TRT, we followed the ridge to tag the peaks.

We hiked east of the ridge for the return, staying between the TRT and the ridge, eventually dropping down a small valley into Twin Lakes.

More rain and snow has fallen and remains in the current forecast before sunny days return again: https://opensnow.com/dailysnow/tahoe

Summer hiking here would be class 1, but the views are spectacular. I noted that the aspens in North Canyon would make for a great fall shoulder season trip. X-Country skiing and mountain biking would be great here too.

Beautiful pictures.
"On this proud and beautiful mountain we have lived hours of fraternal, warm and exalting nobility. Here for a few days we have ceased to be slaves and have really been men. It is hard to return to servitude."
-- Lionel Terray
Top

seanr wrote:Summer hiking here would be class 1, but the views are spectacular. I noted that the aspens in North Canyon would make for a great fall shoulder season trip. X-Country skiing and mountain biking would be great here too.

Nice pictures-very beautiful. North Canyon Road is an excellent nordic ski route from Spooner to Marlette when there is more snow. The graded road base allows you to use touring skis. If you take mountaineering skis or nordic backcountry skis, Snow Valley Peak offers sublime telemarking or virgin powder slaloming.
Top

Thanks for posting! great photos and beta. Lake Tahoe is a breathtaking place. Bet you were glad to be able to enjoy it without the crowds.

Thanks Sean for sharing this TR and wonderful shots with us.