I made a few changes to my original plan due to unfavorable weather and news that I wouldn’t be able to cross the stream in Deadman Canyon to get to the 2019 HST Meetup up at one of the Glacier Ridge lakes. So this trip ended up as a simple loop from Wolverton to Alta Meadows, Moose Lake, Lake 11,200 at the Kings-Kaweah Divide, Lake 10,559 in the Tableland and back to Wolverton.

From Wolverton, I shared the trail with many day hikers until the Alta split and was alone until densely populated Alta Meadows. Protip: If your group has only 1-2 tents and you are looking for privacy at Alta Meadows, head north up the hill and look for a site that is both flat and free of vegetation. It took me a while but I found an ideal site that was also close to the year-round stream for water access. The sky faded red as I turned in for the night. I woke up early in the morning to see that it was still red, snapped a photo, and dozed off again, trying to recover from the previous night’s 3.5 hours sleep.

View of the Great Western Divide from Panther Gap 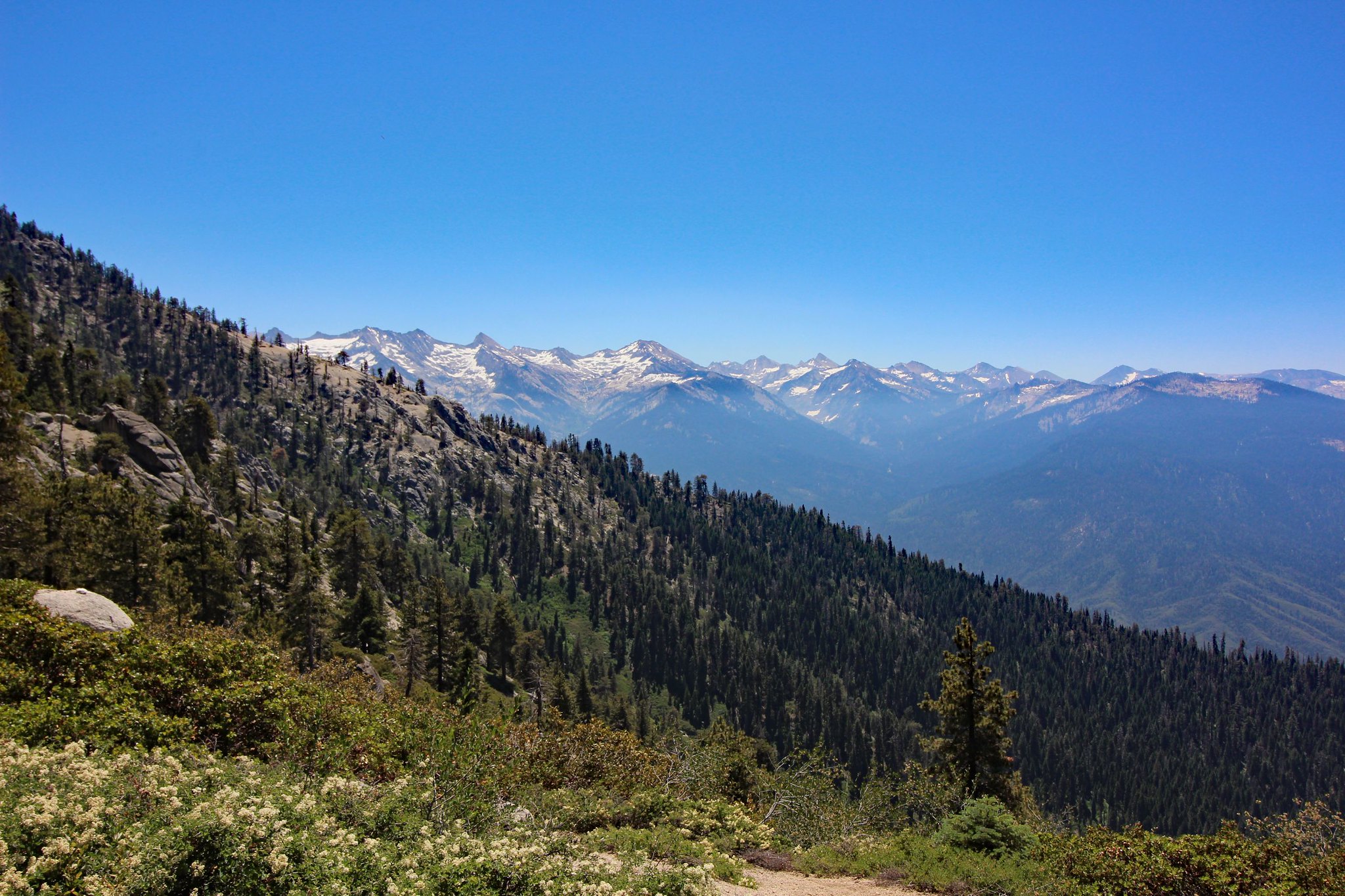 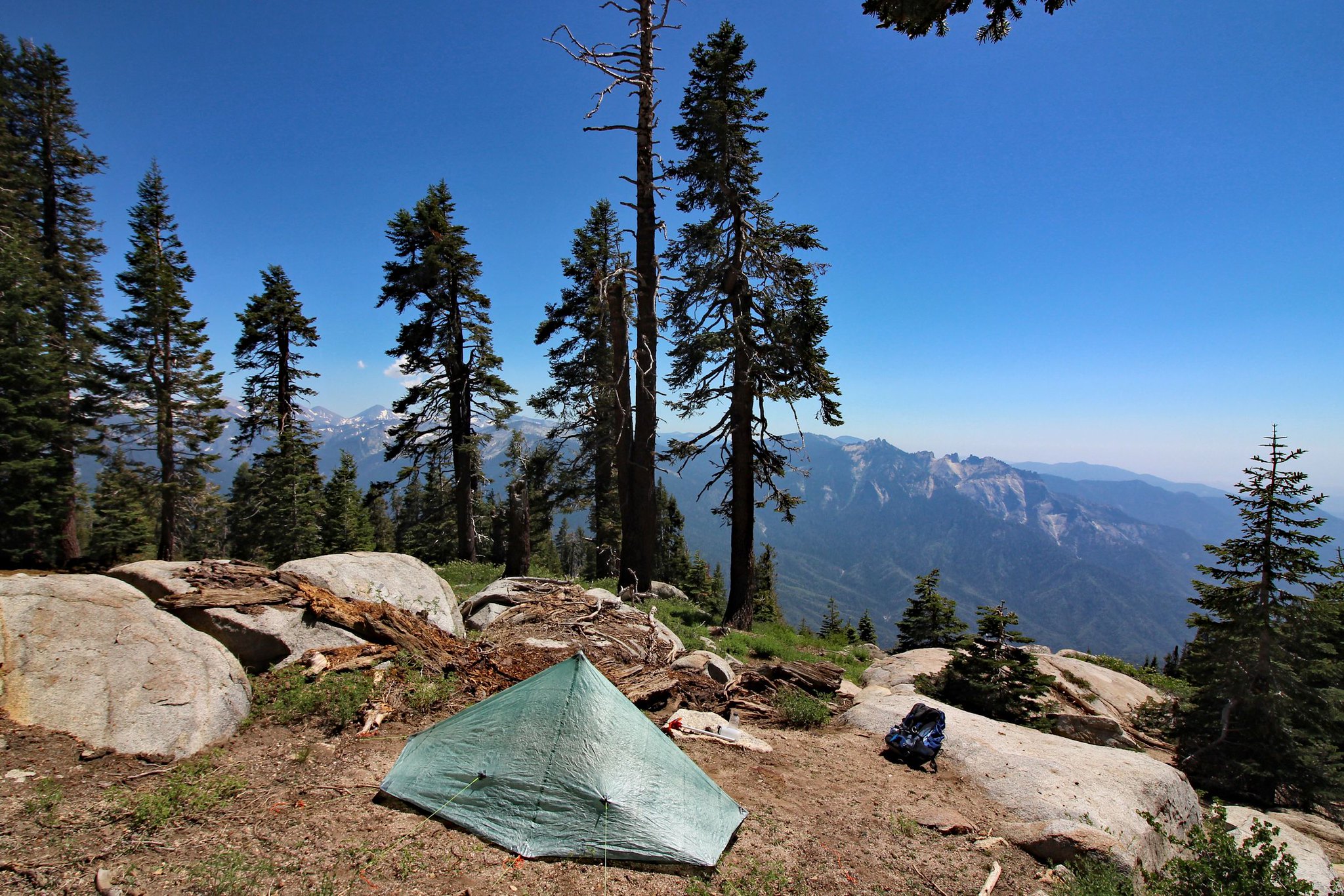 I admit that the hike from Alta Meadows to Moose Lake was much more difficult than I had expected. Obviously, this was due to my heavier than normal backpack to accommodate “winter” conditions: ice axe, microspikes, snow stakes, long snow gaiters, and extra mattress. I had also packed enough food for the originally planned longer route. The first half of today's hike involves going up through tree cover and shrubs on slope angles approaching ~30%. Without trails, I had to remind myself to conserve energy by zig-zagging instead of heading straight up towards my milestone destinations. I carefully walked around a mother grouse and her 2 young chicks with papa grouse perched on a rock watching guardedly and ready to defend. I also finally became a member of the found-a-mylar-balloon-in-the-High-Sierra, or at least pieces of one. I’m still undecided whether to be excited about this. 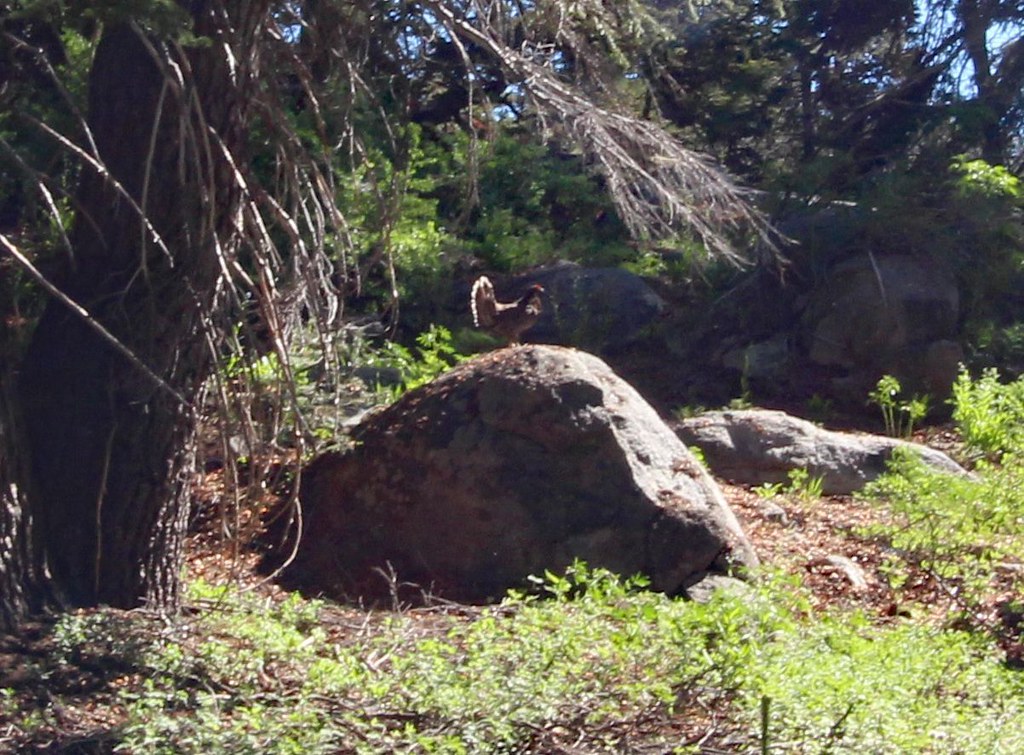 The second half to Moose Lake is above treeline and involves getting over a minor ridge. I tend to ascend higher than necessary, likely due to my reluctance to lose and have to regain elevation. At the top of the ridge, I feared my habit had gotten the best of me again as the other side of the ridge was just a steep cliff down. Surprisingly, I discovered a faint use trail going down. As expected, the trail didn’t last long but it got me down safely and I resumed the climb to Moose Lake. I arrived at the southern end of mainly frozen Moose Lake where getting water would be difficult. Because of the steep snow on the shoreline, I would have to go around the lake’s rocky perimeter to get to its outlet and flatter terrain. The question was, up and over or around back. I chose to go around the back, which was an arduous task as I had to backtrack a few times when the route became too precarious for comfort. The most difficult part of this trip was actually getting into and out of Moose Lake. Finally at the lake, I was able to relax.

On the ridge between Alta and Moose Lake 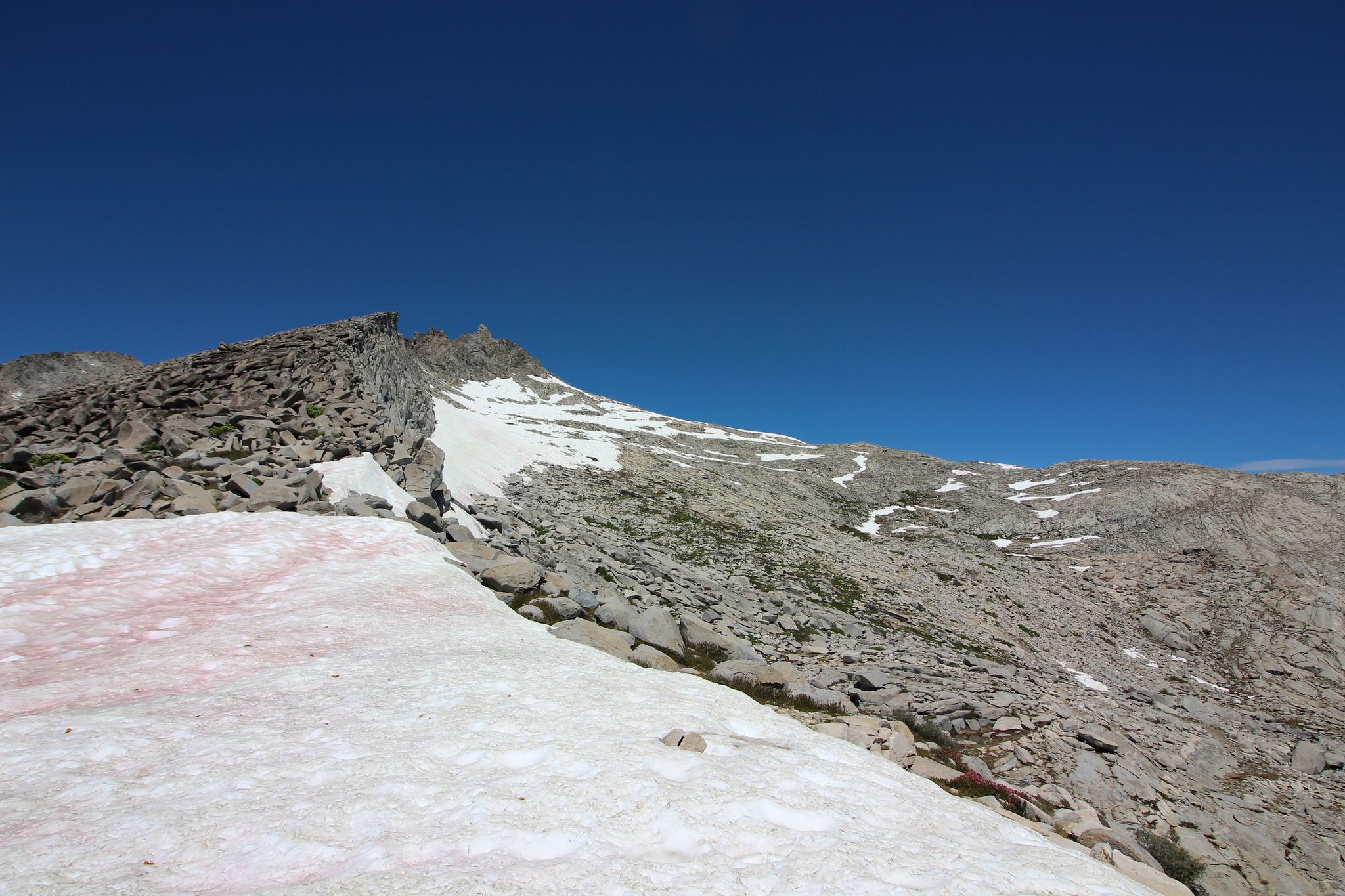 Southern side of Moose Lake 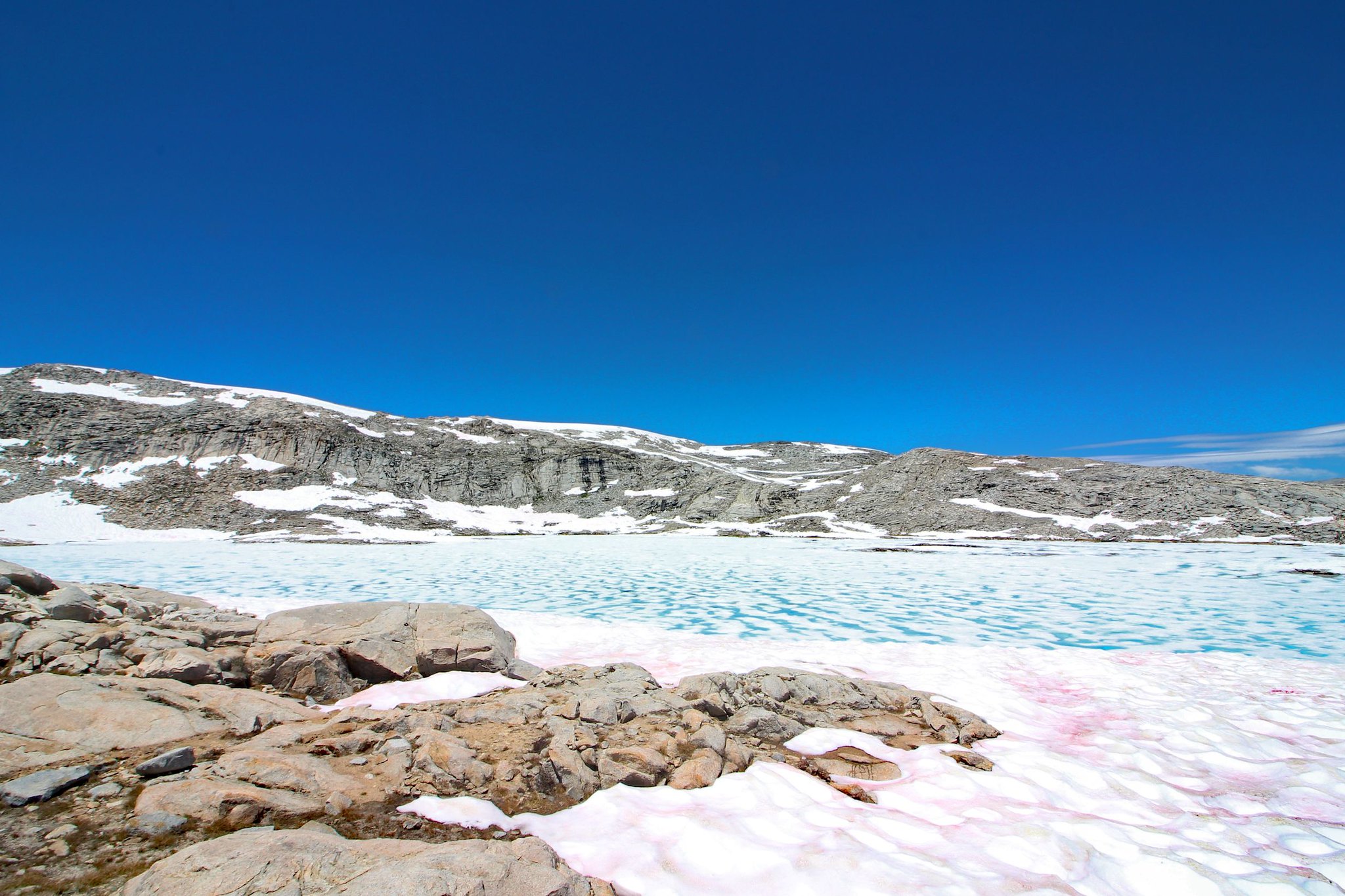 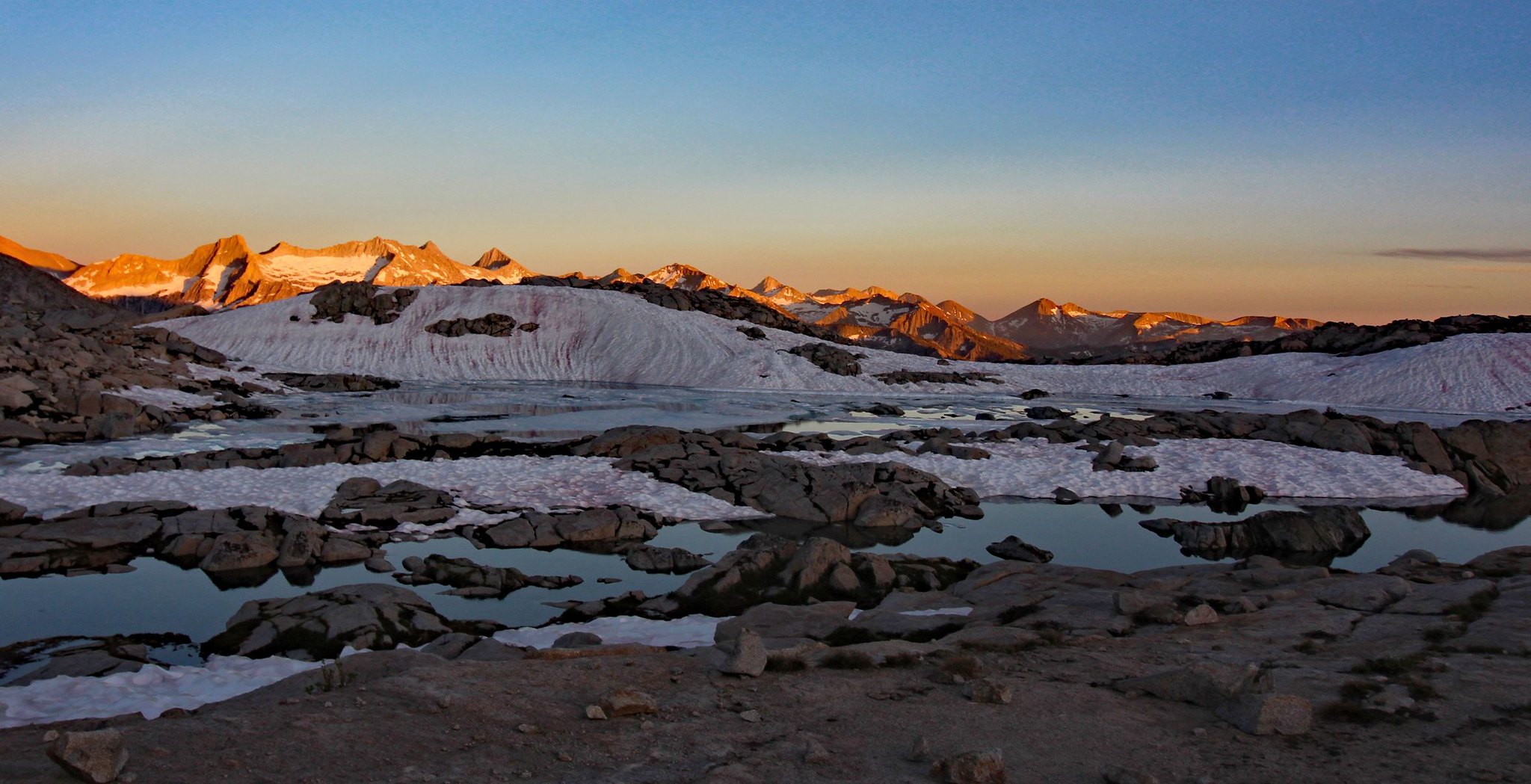 I was excited about getting up to Lake 11,200, flanked by a prominent avian on the Kings-Kaweah Divide. The lake wasn’t particularly far, but I was careful about crossing over snow-covered lakes or streams. Although rejected by traditional navigators using paper maps and compasses, I used my iPhone Gaia GPS app to make sure I was on solid land and make no excuses about it. My philosophy is any tool is fair game if it prevents me from becoming an ice cube. There were no cliff or tree obstructions so I assume the location was somewhat accurate. At a few locations, I heard water running below so had to navigate around or look for rocks to detour on. There was a single steepish section where I really didn’t need to, but took out my ice axe since I carried it all this way. I also had ice axe in hand as I walked across the final snowfield to Lake 11,200 just in case some strange force of nature pulled me towards the lake. 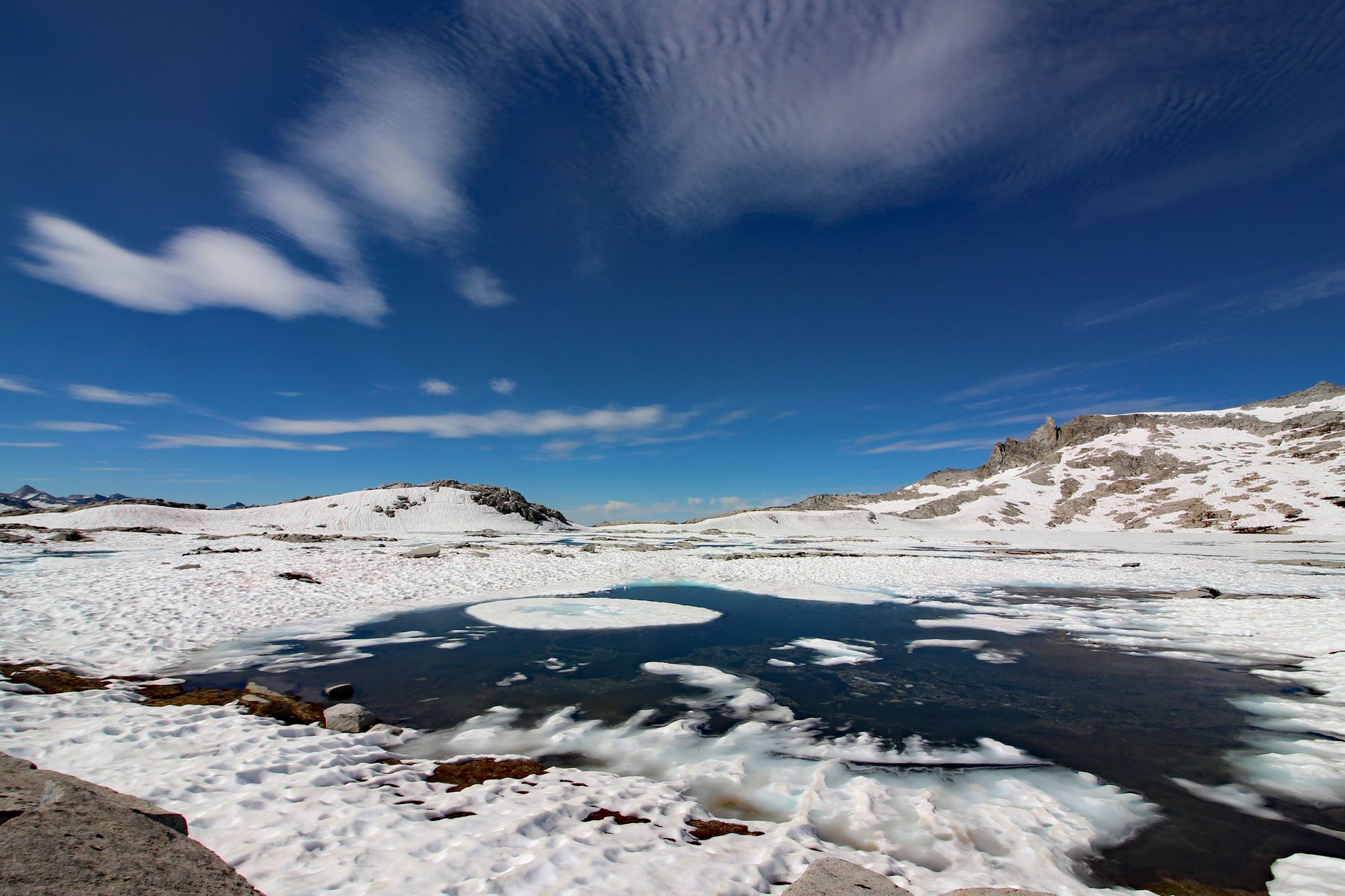 Up and over to get out of Moose Lake 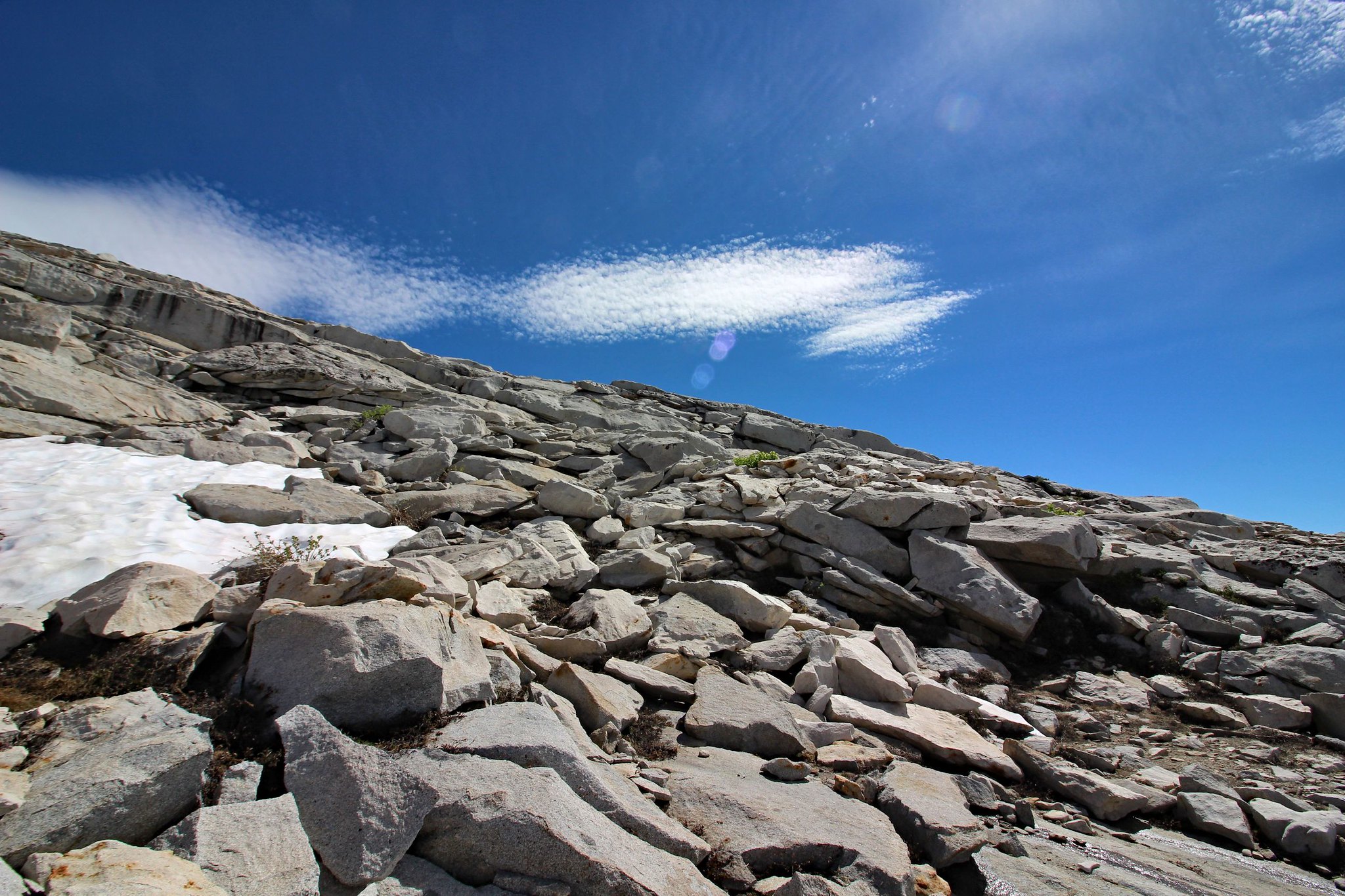 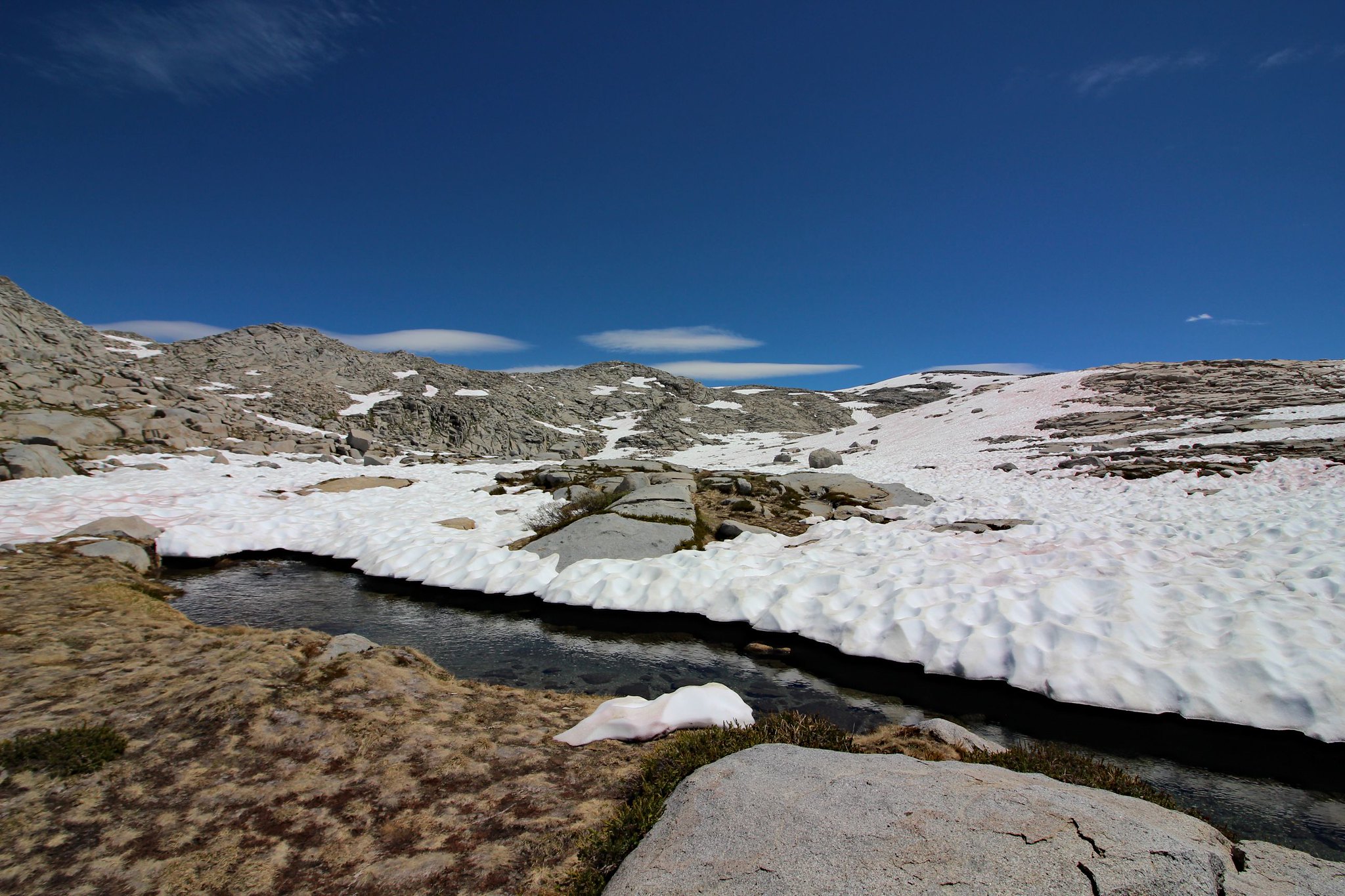 It never got steeper than this 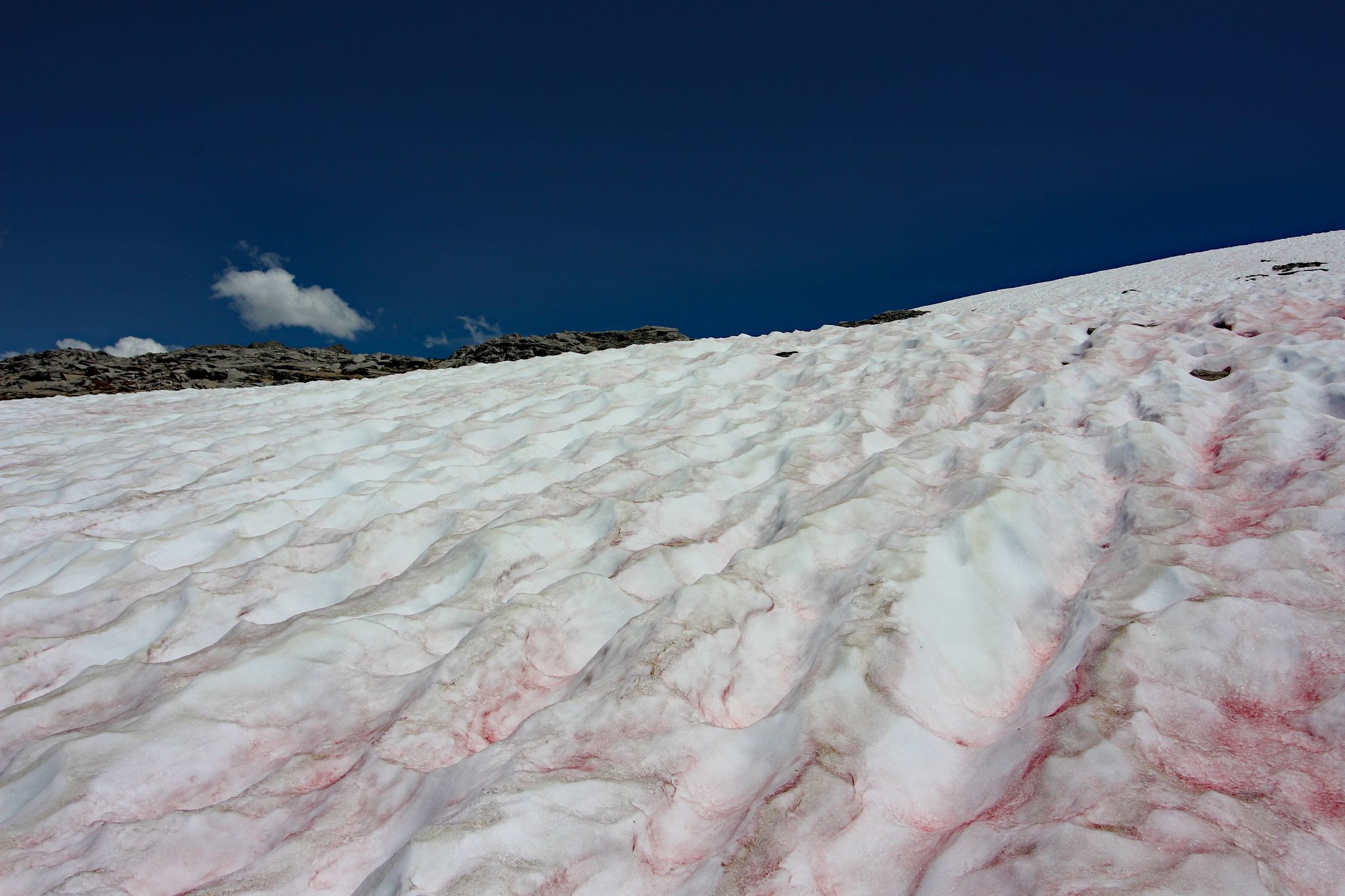 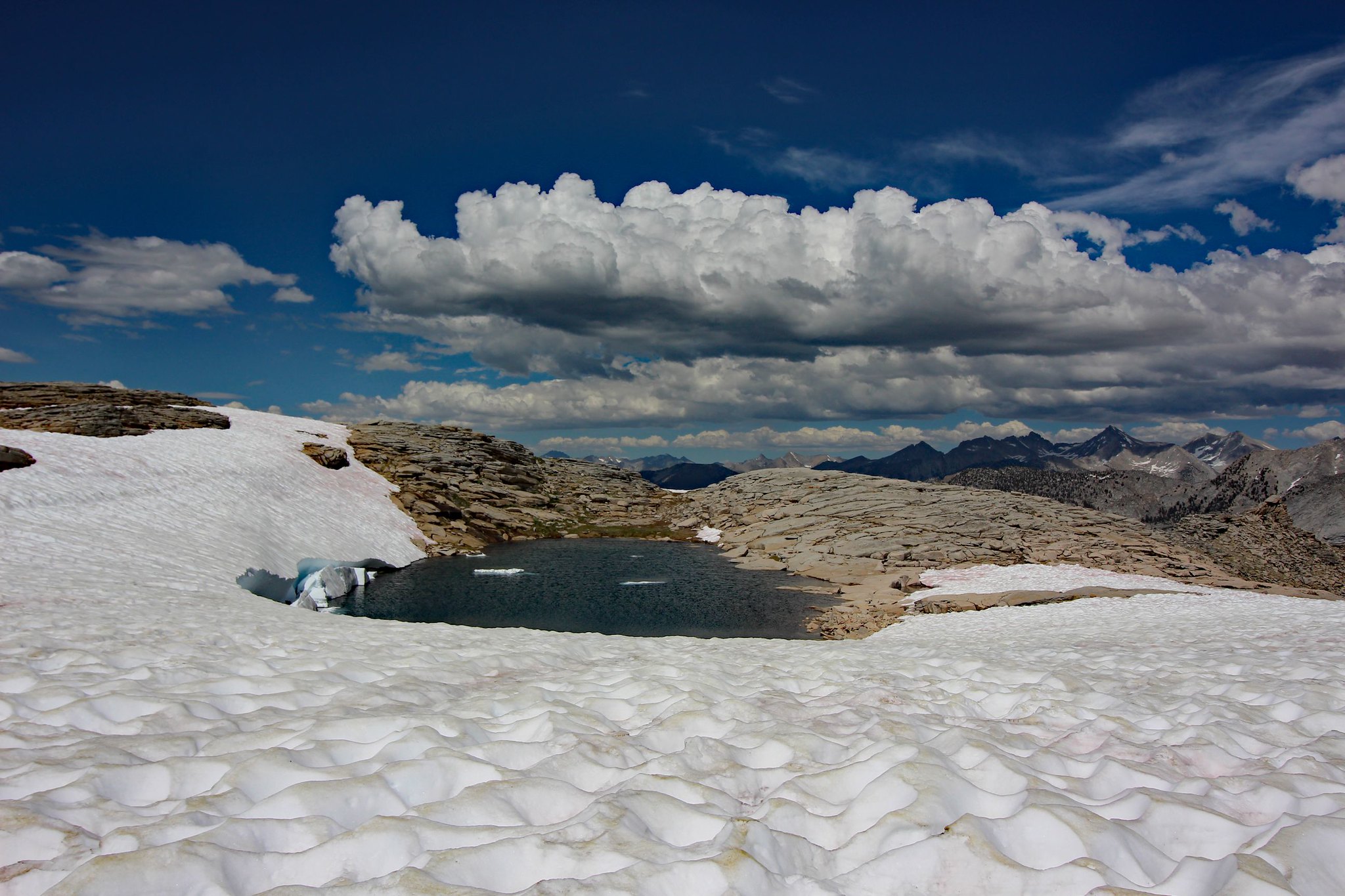 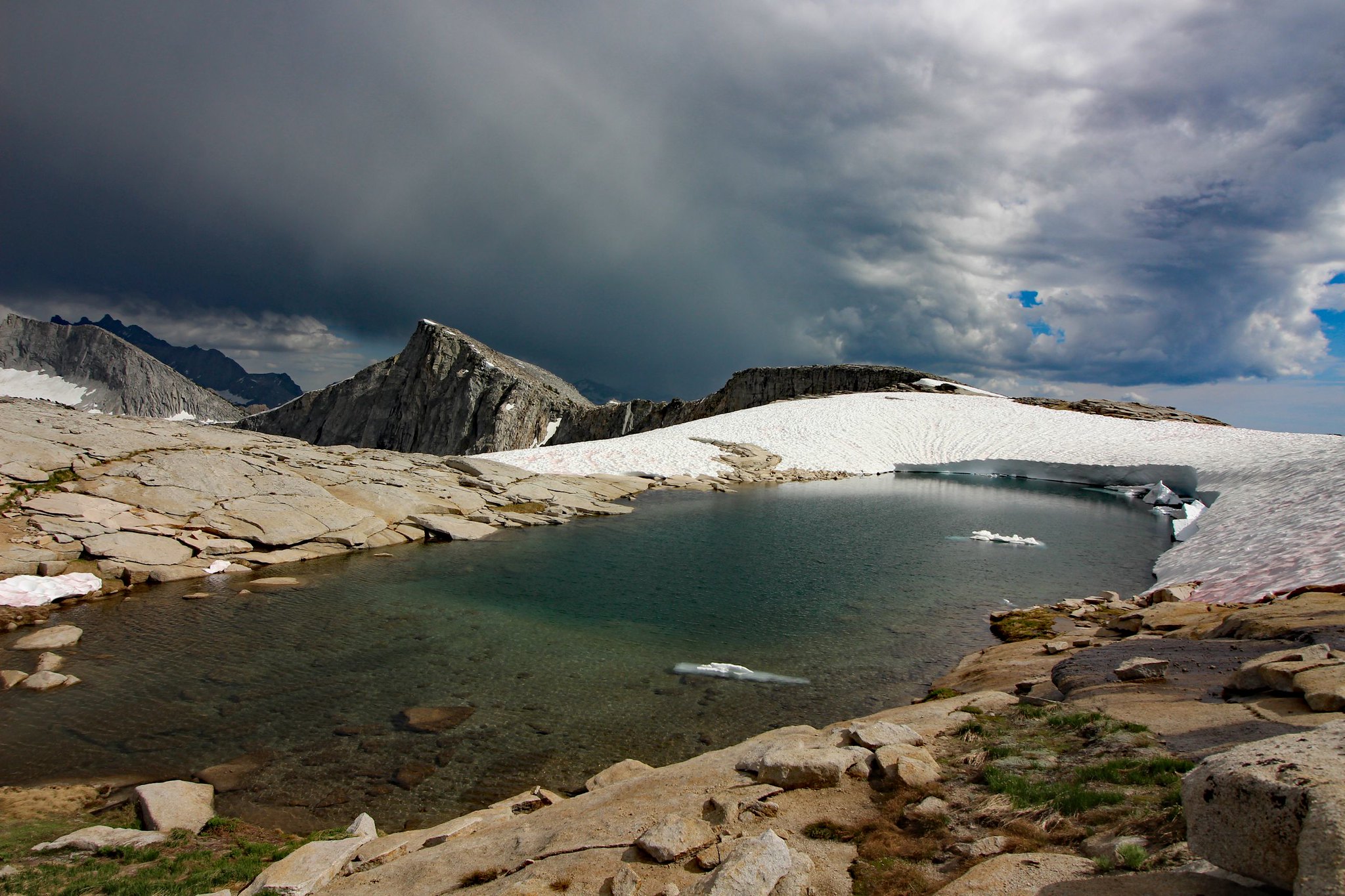 Big Bird Peak and the mountain ranges to the east are truly breathtaking sights from here. I'm so grateful for digital storage since I would have spent a fortune on film. There are many places to pitch a tent on this panoramic ridge but threat of thunderstorms forced me to reluctantly choose a lower unexposed site. Dark thick clouds hovered to the east and a bit to the north. I was only on the fringe of the storm, getting a light drizzle, but I could not predict its direction. 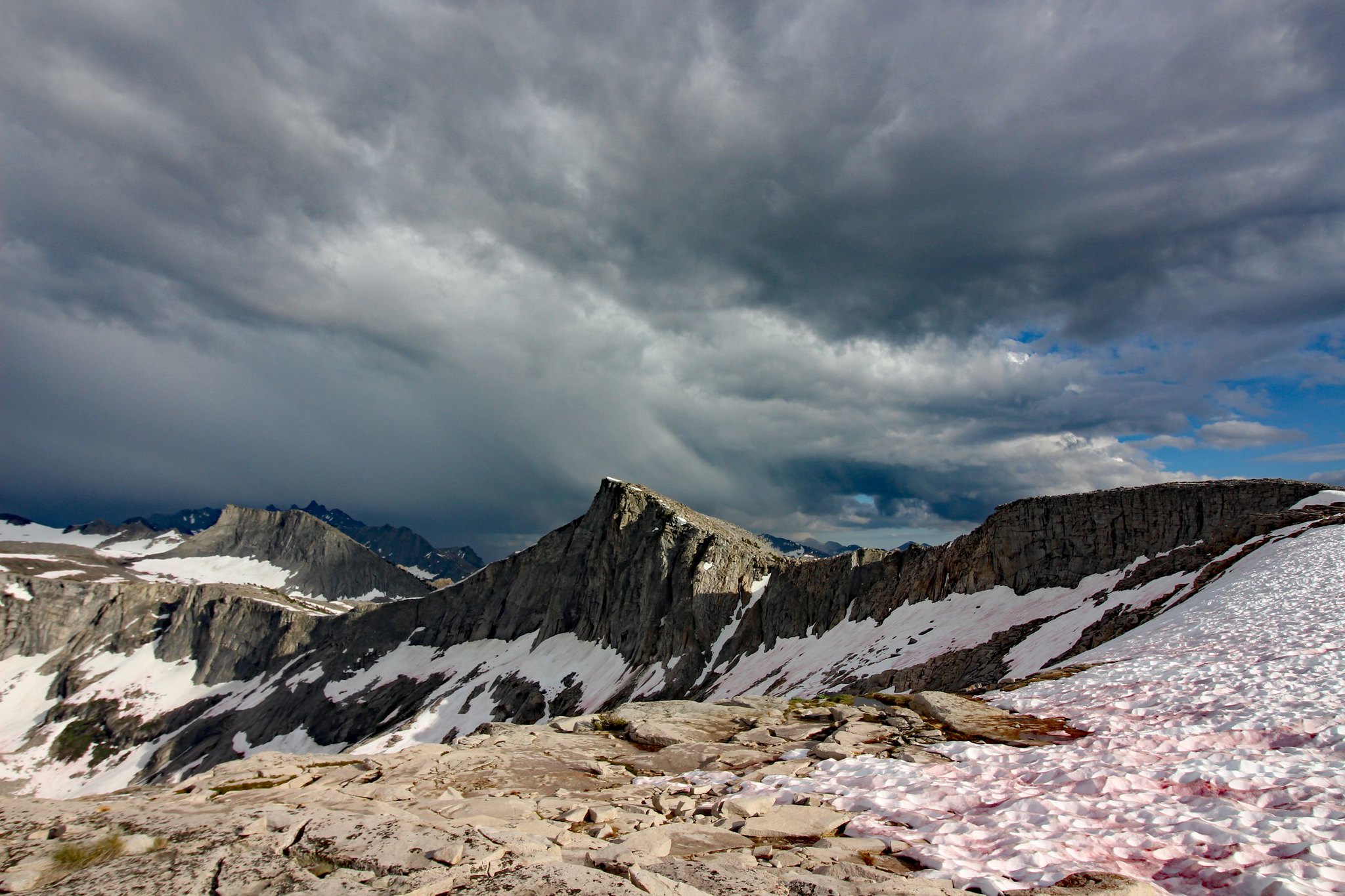 Pot of gold on top of Lion Rock 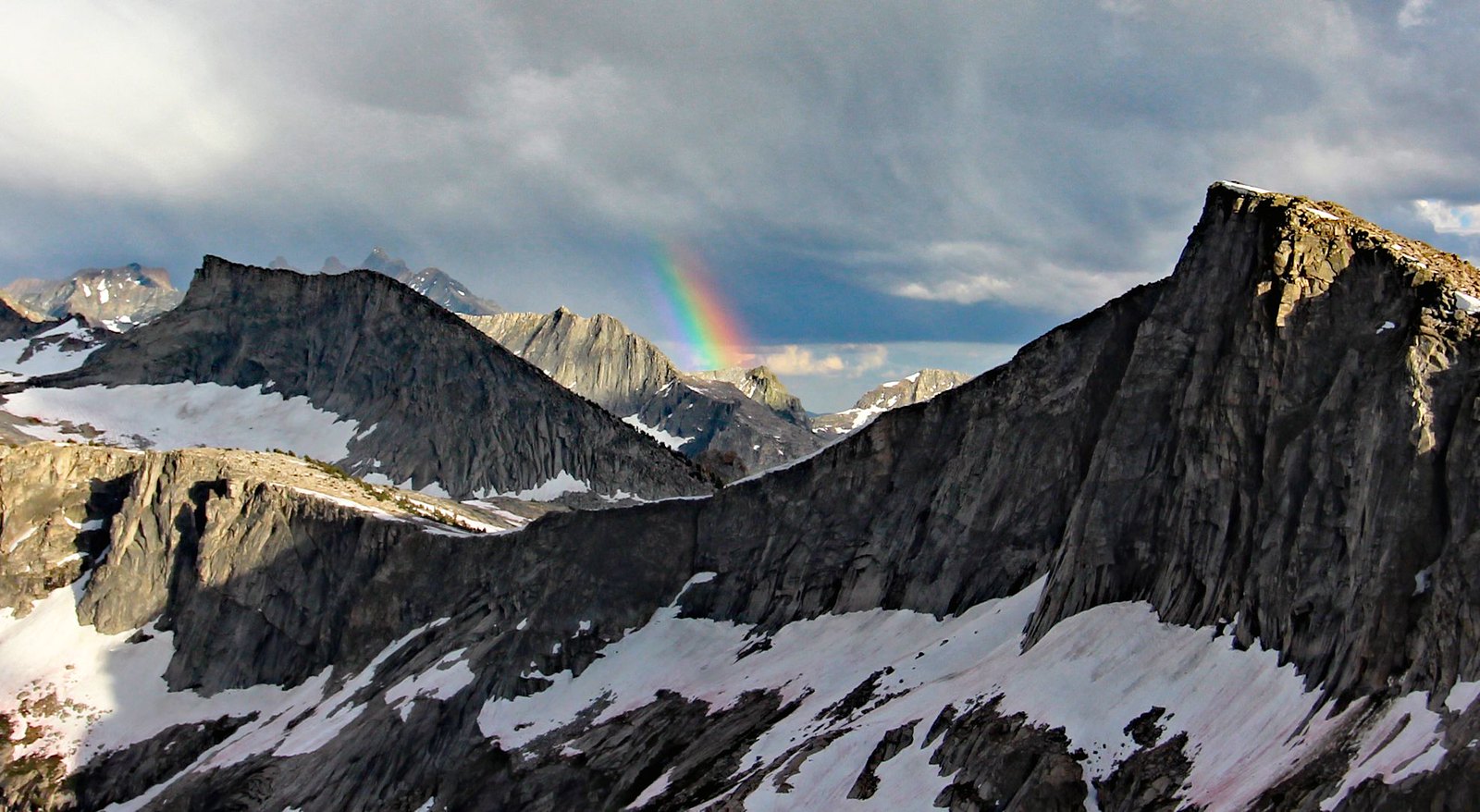 One of many campsites on the ridge with excellent views, but not during a thunderstorm 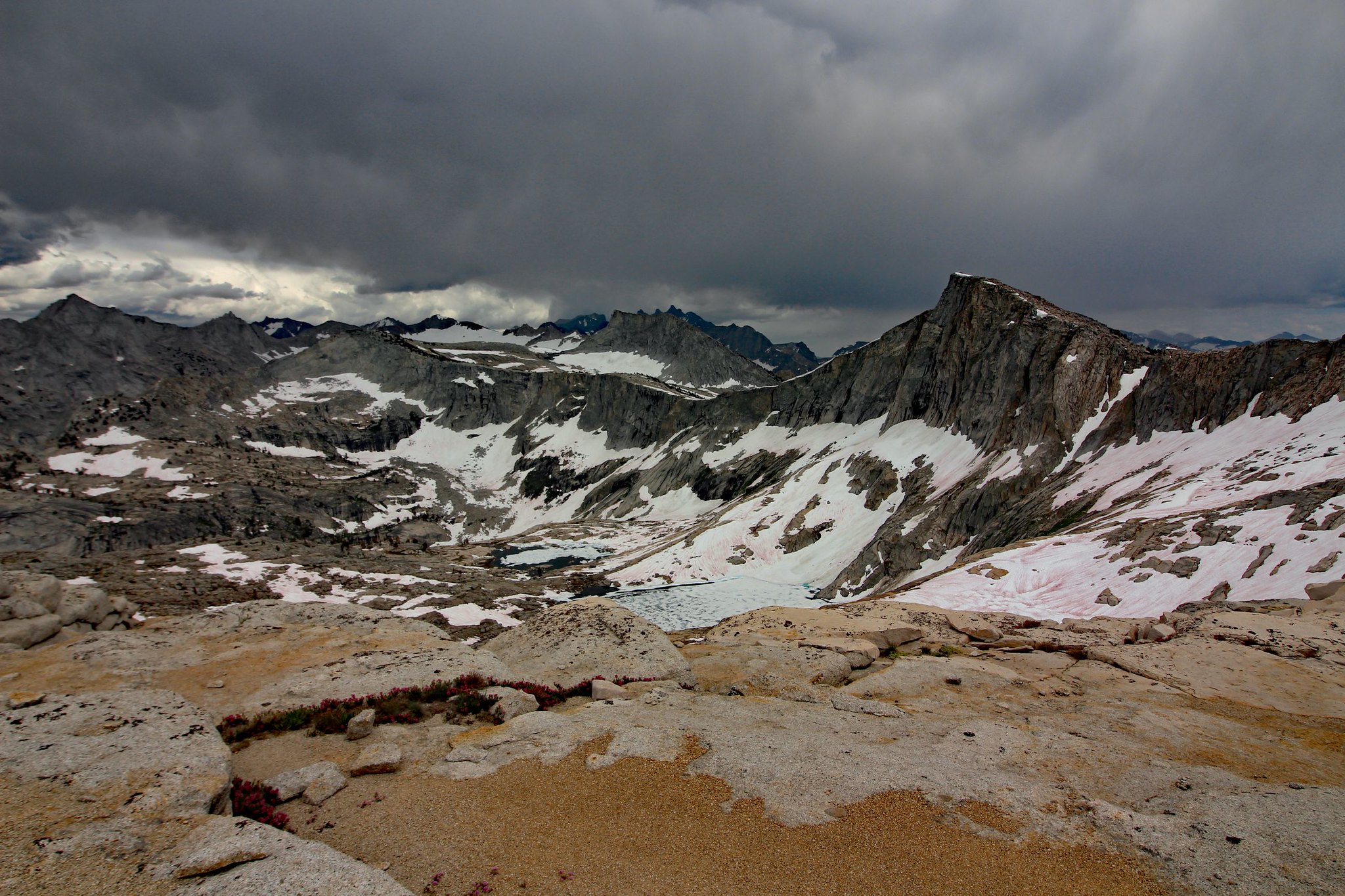 One of my problems while solo backpacking is my tendency to take the path of least resistance. I was leaning towards just hiking a few miles back down the Tableland instead of my original plan of going over Pterodactyl Pass to Lonely Lake to visit Horn Col. The dark cloud-blanketed sky and threat of rain made this option even more appealing. So I set my destination for Lake 10,559. For such a short distance, travel was relatively slow due to the same detouring-around-water reasons and also choosing to follow rock paths instead of stepping over deep suncups. I saw many mosquito breeding pools at Lake 10,559 which evoked scenes from the classic Alien movie I had watched the week prior. I assumed the mosquitoes hadn’t hatched yet since I wasn’t bothered by many. I ended up spending most of the afternoon in my tent anyways due to rain and some hail. The sun finally broke through around 7pm, giving me a short window to take advantage of the soft light. 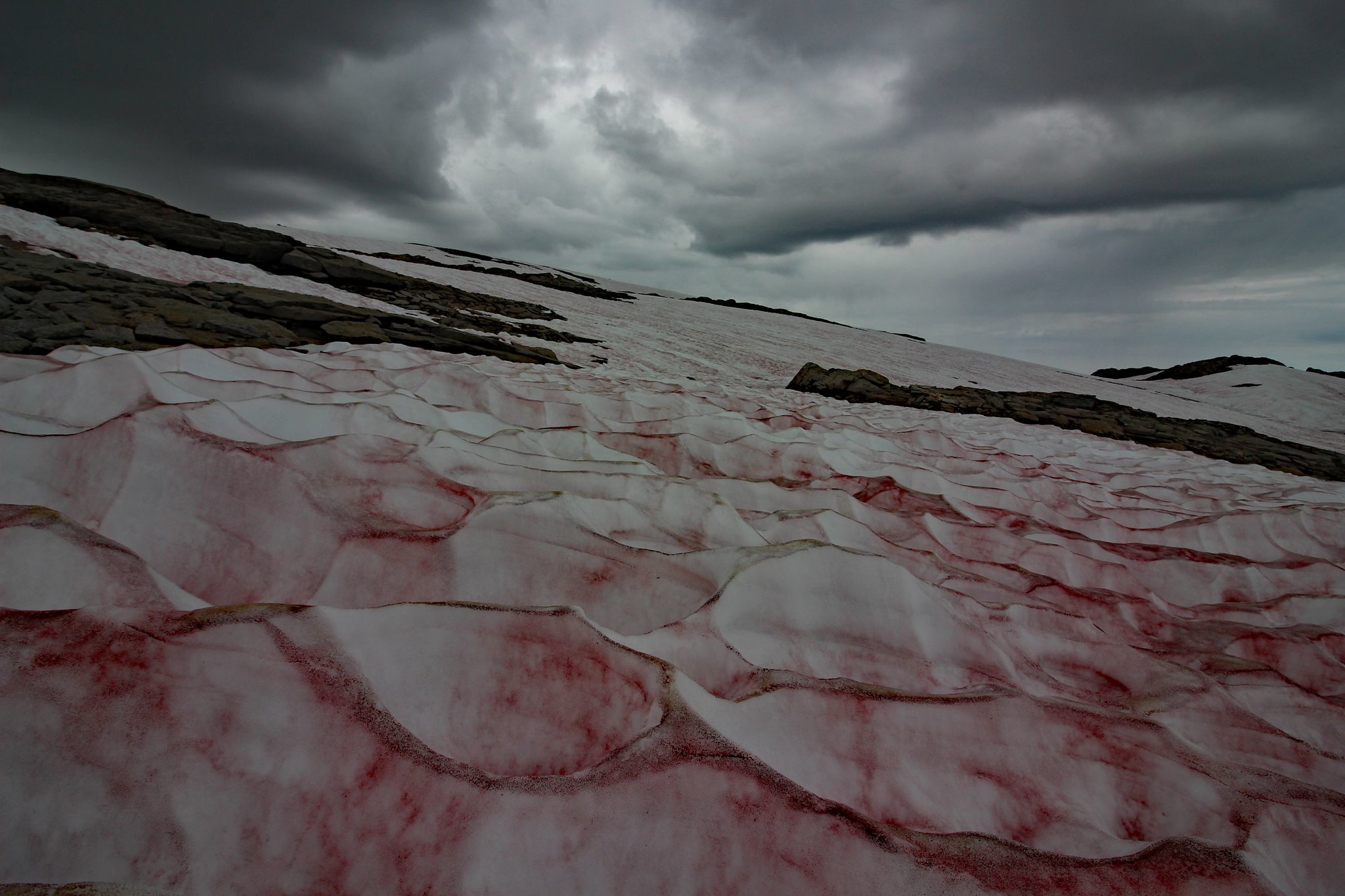 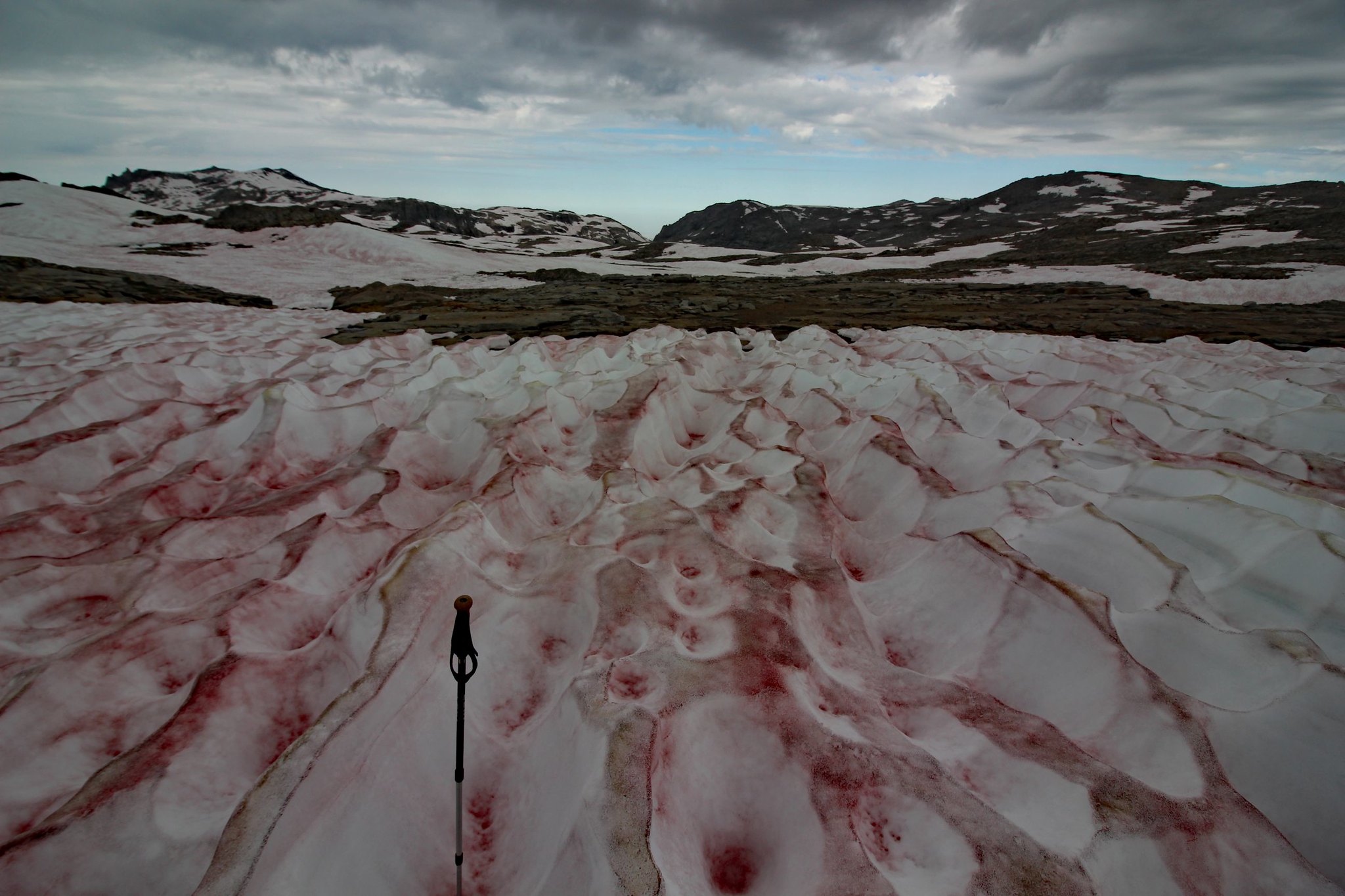 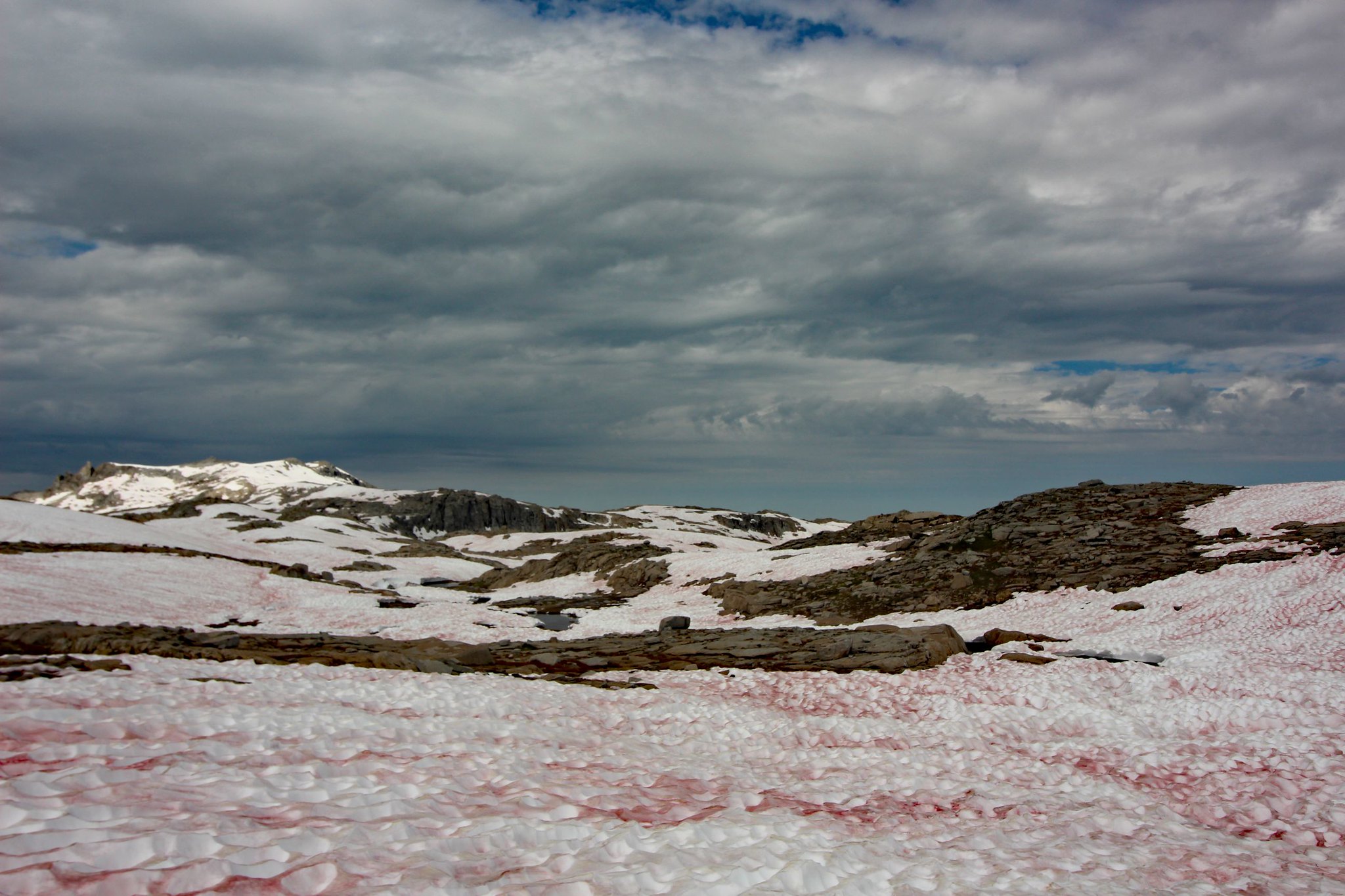 Scarce moments of sunlight at Lake 10,559 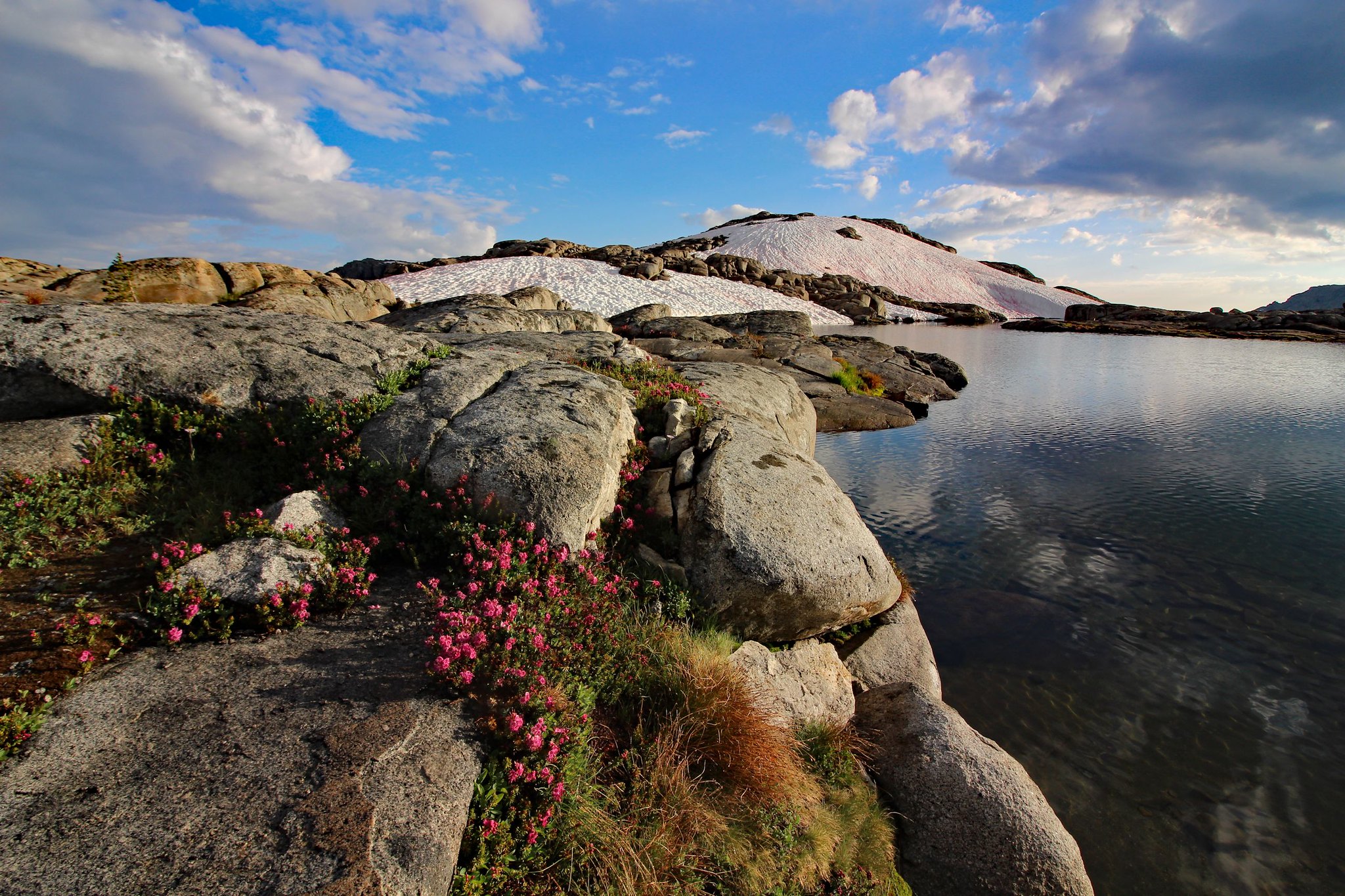 The mosquitoes must have hatched during the night and were relentless in the morning. I had to finally put my head net on. The weather report forecasted afternoon rain again and then more the following day. So I decided to exit. I descended to Table Meadows and followed the Marble Fork Kaweah River to the Pear Lake area, remembering to stay on the correct side of the river and streams before it was too late to cross downstream. This area was highlighted by numerous cascades and flowers. After I picked up the trail by the Pear Lake Ranger Station, travel back to the car was fast. Looking back, I could see the dark clouds building and was glad to be out. 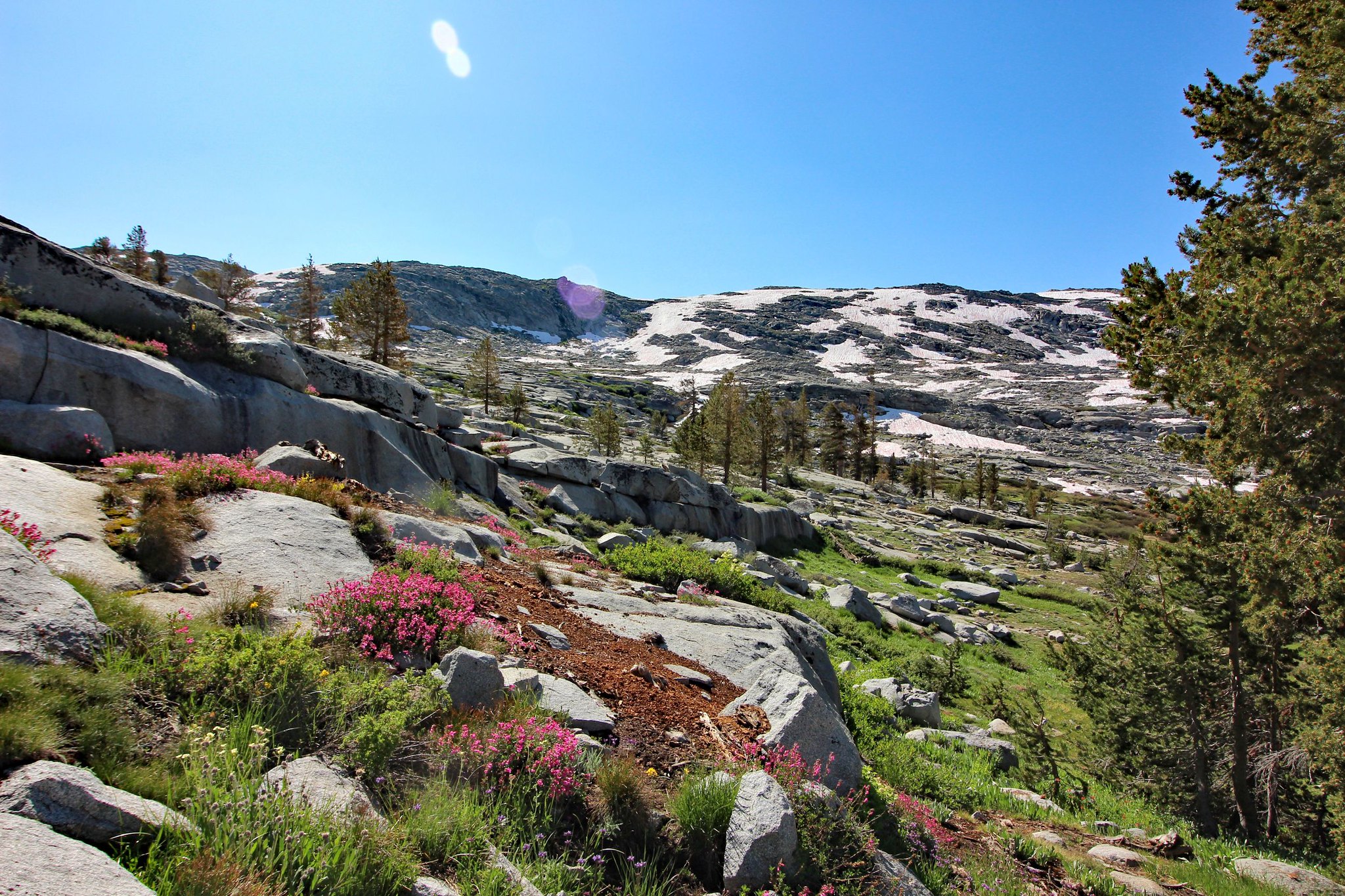 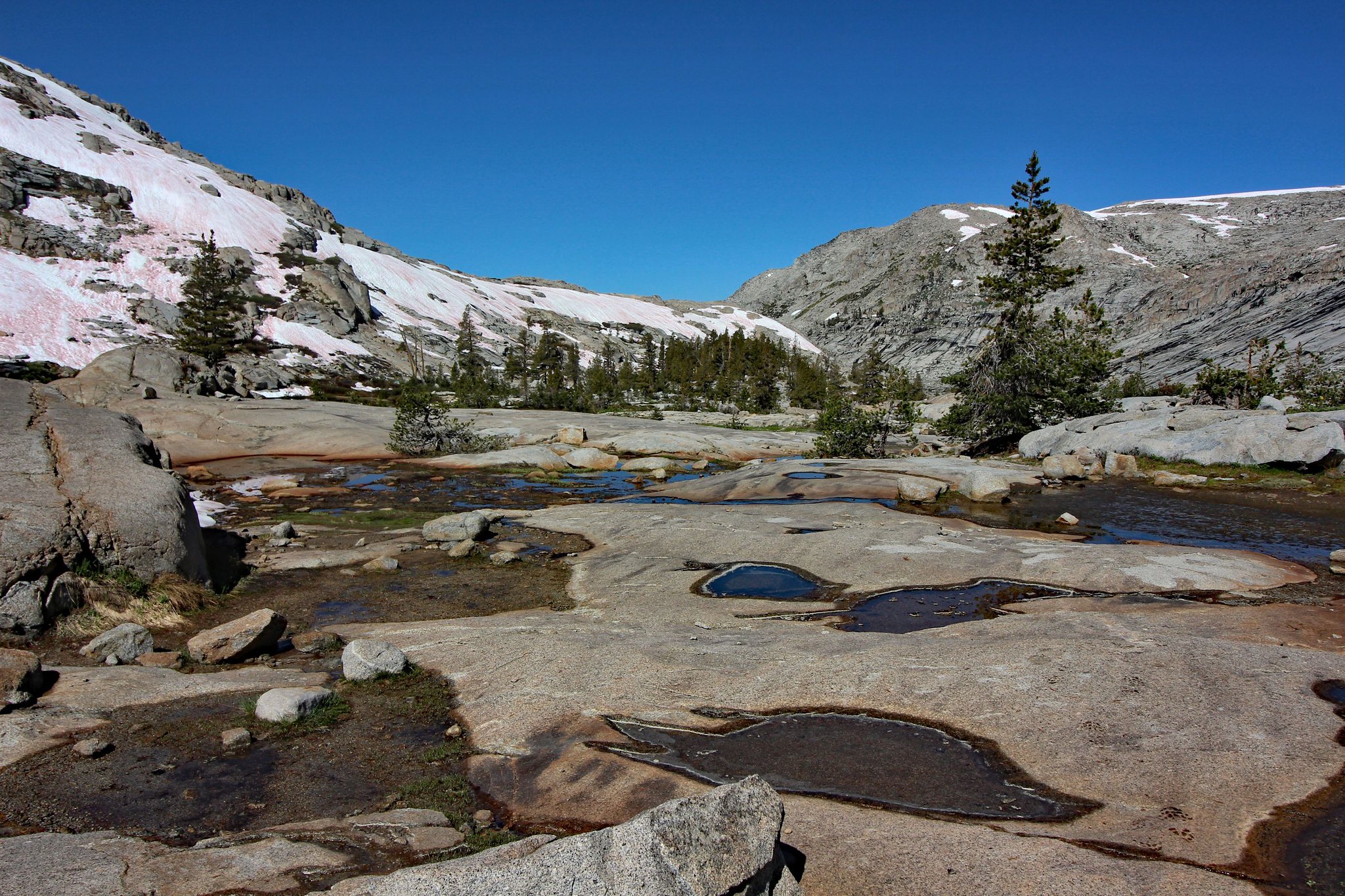 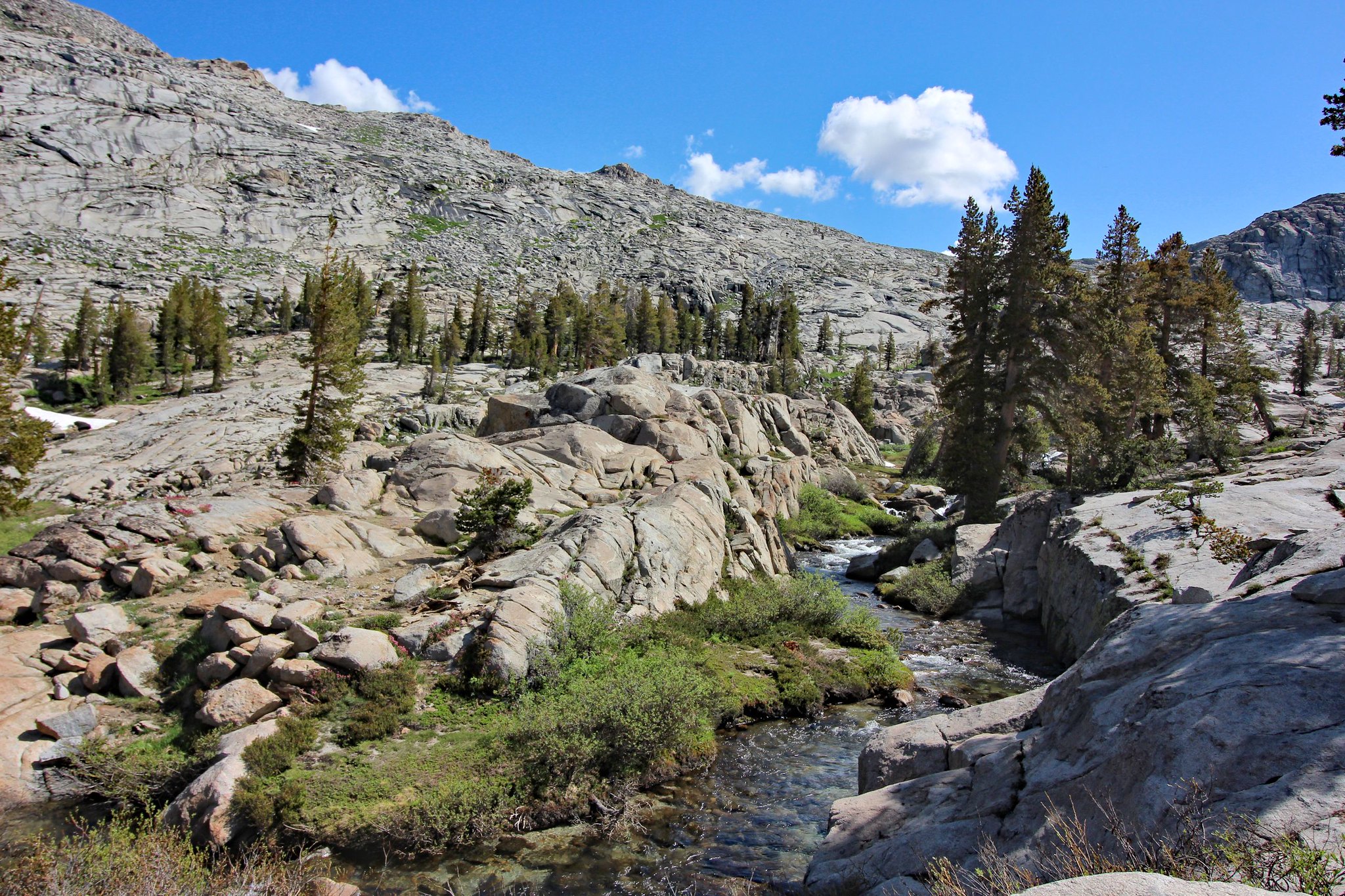 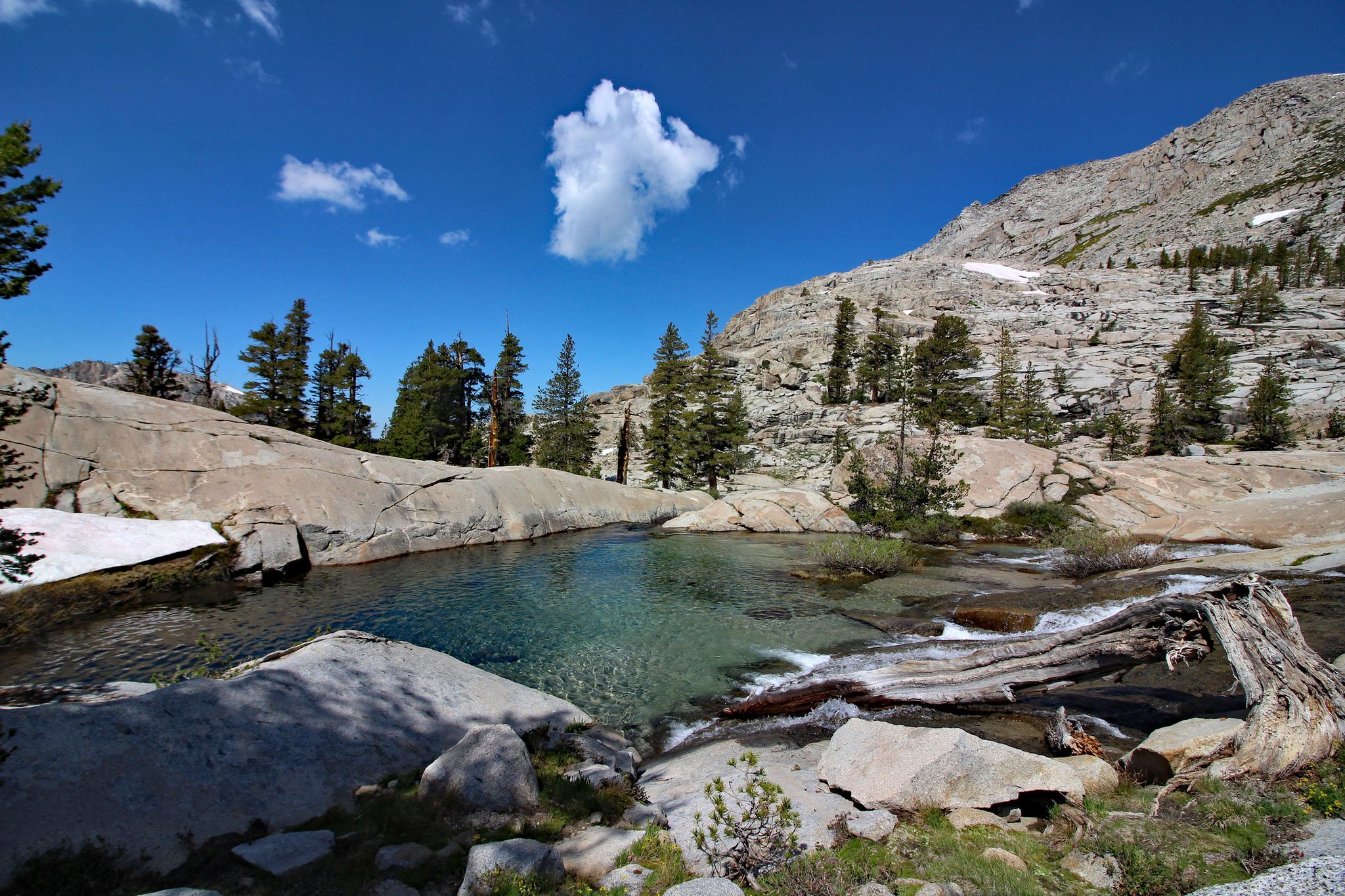 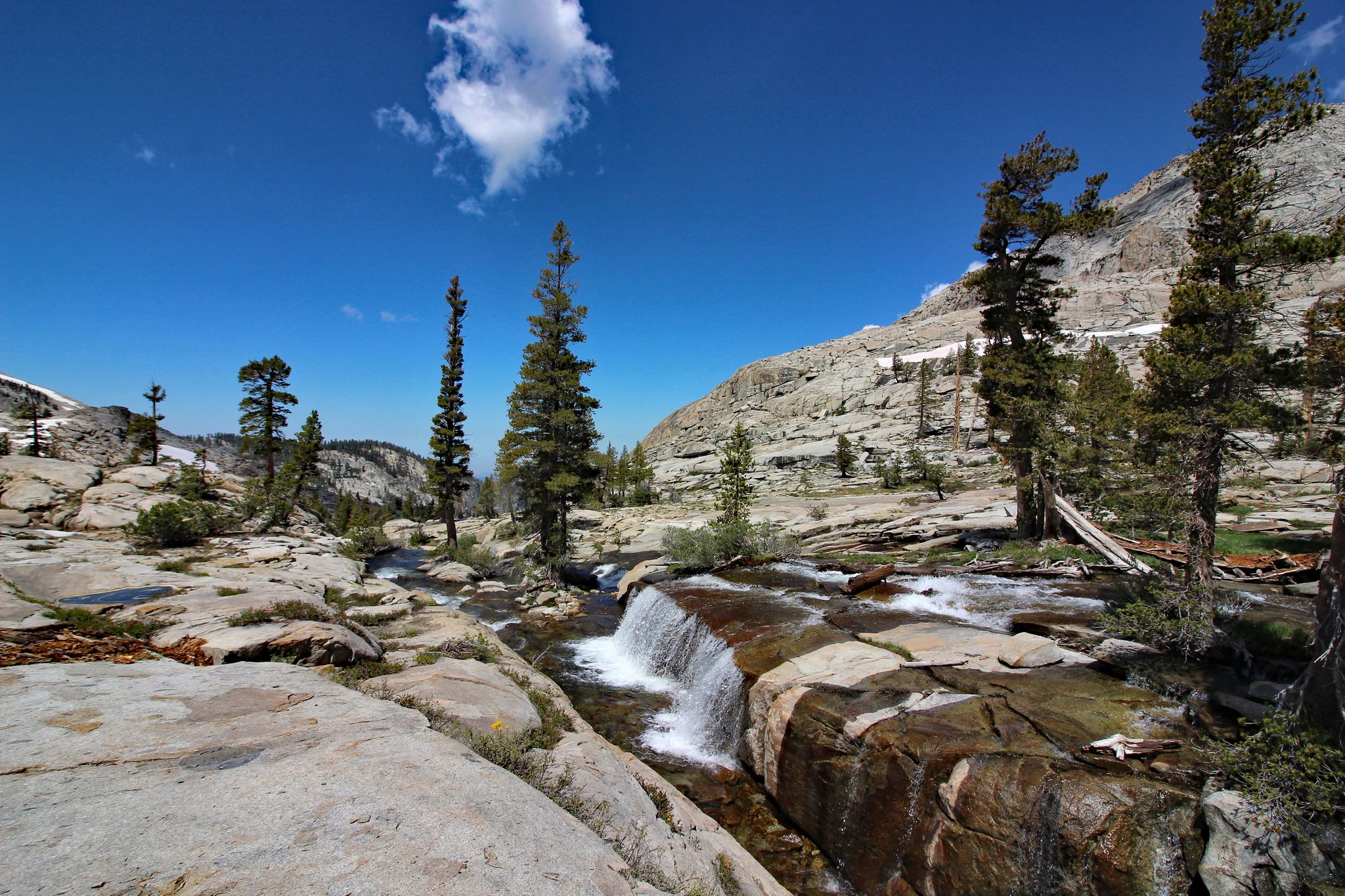 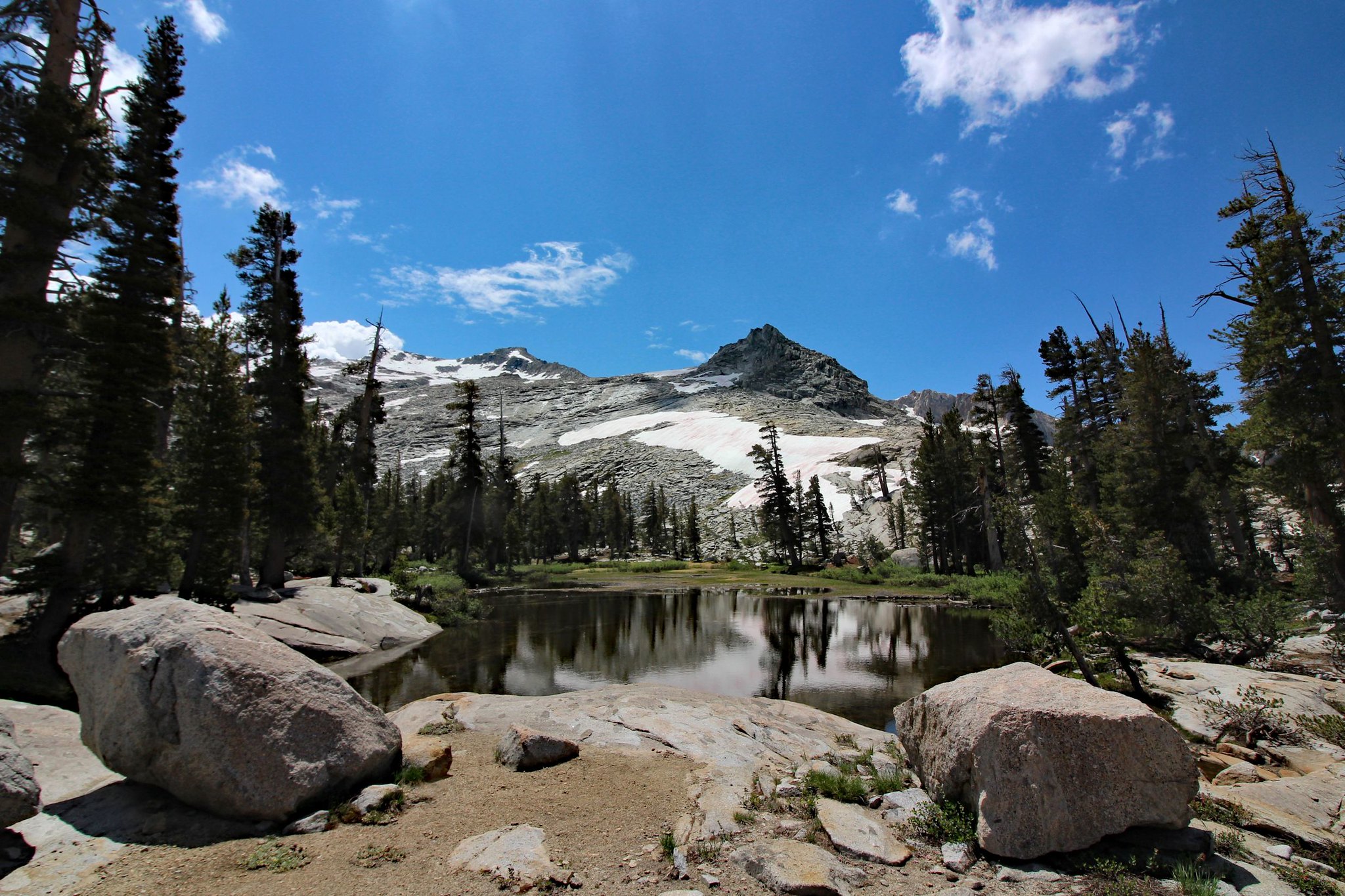 Clouds building up for next storm 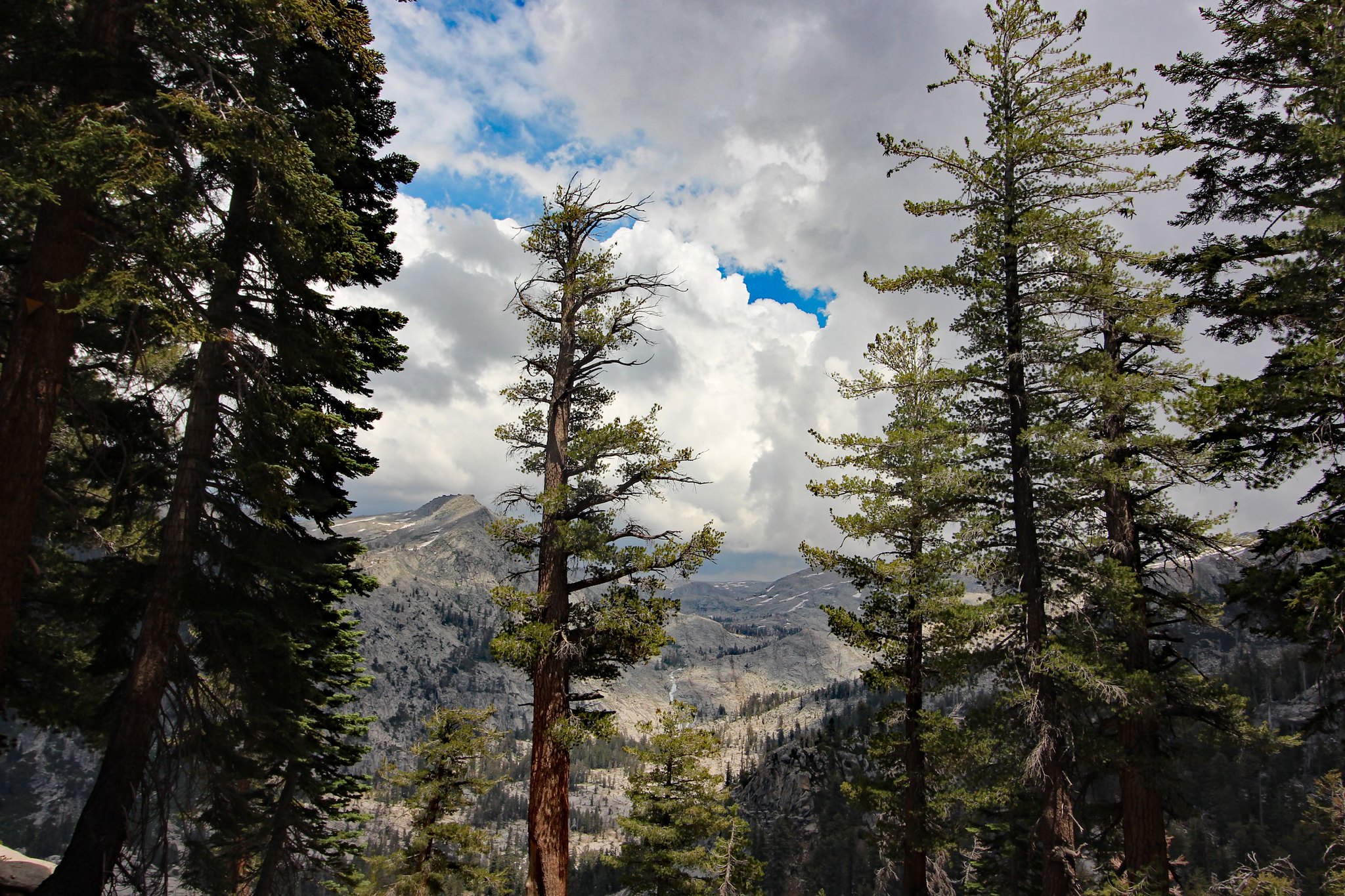 These are beautiful photos...and a great report. Thanks for sharing this with us!
Balzaccom

Looks like I was a day behind you itinerary; I was on the ridge W of Moose Lake Monday night having approached from Pear Lake, and I camped around half a km SSW of Lake 11,200 along the ridge that's north of the lakes that feed into Buck Canyon the following night.

And I hear you about taking the path of least resistance when solo backpacking, particularly if morale has started fading.
Top

Rocky: that was a gorgeous rainbow; sort of reminiscent of the late season rainbow Harlen captured in the same area last year. Nice work! And, I'm with you on the balloon issue. I've found very few balloon bits the last couple years: I'm assuming that it's because HST members have been picking them up as odd mementos. thanks for the report!
cameron
Top

Great report and fabulous photos, Michael. I spent 26-27 July on an overnight trip to Little Lake in the Dinkey Lakes Wilderness. Not nearly as much snow up there - one 10 foot patch on the trail that could be walked around. Mosquitoes were intense, flowers are late, looking forward to more hikes.
www.sierrahiker.com
Top

Rockyroad.
great report and photos! I have wanted to connect the dots between Alta and Pear - exploring the Tablelands(especially 11,200.) that shot of Big Bird and the one of the rainbow are gorgeous! nice work! thanks again.
Top

Thanks for the kind words, everyone.

Ashery, it's too bad our paths didn't cross. From your and other's description of the mosquitoes in Deadman Canyon, I'm glad I didn't go down there.
http://mytrailmixx.com
Top

Great report, brings back memories, especially those great views of Big Bird Peak over Lake 11,200+. My trips to the Tablelands have been in August with basically no snow. Looks a lot different with all that snow!
-Phil
Top
Post Reply
9 posts • Page 1 of 1