Grab your bear can or camp chair, kick your feet up and chew the fat about anything Sierra Nevada related that doesn't quite fit in any of the other forums. Within reason, (and the HST rules and guidelines) this is also an anything goes forum. Tell stories, discuss wilderness issues, music, or whatever else the High Sierra stirs up in your mind.
Locked
511 posts

Hope all of you are doing well, including your families, and are virus free!
How has this situation effected you, your family, or your job? The school I work at shut down today, for at least 14 days, but they are saying it may be much longer.

Anyone having issues with getting basic supplies, like water, food, toilet paper, cleaning supplies, or hand sanitizers? Many stores in our area (Santa Clara) are running low, or are out, of tp, sanitizers, frozen foods, and many other items, and it is projected to get much worse.

Have a safer backcountry experience by using the HST ReConn Form 2.0, named after Larry Conn, a HST member: http://reconn.org

Yep, my wife and I are work from home. I realize now that we need WAAAAYYYY more coffee mugs in our house

"Adventure is just bad planning." - Roald Amundsen
Also, I have a blog no one reads. Please do not click here.
Top

As a hard core skier, there is a massive ongoing thread on the coronavirus on our skiing board that includes a great many US national and international skiers. Lots of closures and abandoned travel plans being discussed. Like I went up to The City yesterday to street hike and just a day later there are 20 plus pages of posts. I myself have non-refundable $200 airfare SJC to DEN on Southwest for April 2 returning April 7 in order to ski Winter Park where I'd bought a 3 day pass for $150 that is looking increasingly doubtbful, so may take a hit there. But as a single retired senior living alone with SSA checks coming in every month, a modest savings account, without a need to go to a workplace, with a very healthy, fit body, am much better off than large numbers of others.

Here in the San Jose area, given my tour Monday visiting several big stores like Walmart and supermarkets, there has already been a run on certain supplies like alcohol based hand cleaners, isopropyl alcohol, and some foods. At Walmart numbers of middle aged women were busy moving about in gabbing groups with shopping carts bulging with A to Z supplies. I managed one of the last gallon containers of aloe vera (to make hand cleaner) for $6 and 8 pounds worth of rice, but cheap isopropyl alcohol seems long gone everywhere. Some of that was no doubt scooped up by ebay sellers and local businesses that need it for industrial cleaning uses, after the depleting hand cleaner news hit last week as they are now selling such online at huge mark ups. Probabably available still in smaller Central Valley city areas but not here in this huge urban area. At least I have maybe 18 ounces left that I would like to find more of.

Was expecting to drive up after this weekend to ski some fresh powder as this large cold storm exits, however even that is becoming questionable as day to day news becomes more dire. Something I wrote on a couple other forums:

--------------------------------
Beyond all the illness misery, death, economic, and lifestyle issues, the disease does have value in forcing society and its people to understand vulnerable issues of what a global viral epidemic in this era of world wide travel, especially business travel, a global corporate economy, and overpopulation entails.

Decades ago when most western nations were relatively independent economically, notably for everyday consumer goods, and particularly food, and especially given how our frequent human wars tended to isolate countries, a nation might isolate themselves by simply closing borders and international travel if it came down to that. Today as massive corporations race to lowest costs by buying globally, and politicians set up fair trading policies, we cannot isolate ourselves those ways that is a weakness. In the USA, much of those goods and increasing amounts of food is being imported. We still most importantly have the majority of our food production so in the worst situation, we will still be able to eat though may not have a toothbrush or toothpaste to brush our teeth. Many other countries given endless population growth, especially in the third world, have lost much of their domestic food production, so in the worst situations could be facing famine.

For years I've been complaining about the economic and political powers of growth and development driving endless population growth, especially as it relates to irreversible damage to our fragile blue water planet and its life. And have warned that unless we human beings work together for a static population much lower than already exists with static sustainable economic goals, we as a species may be doomed.
http://www.davidsenesac.com
Top

The class I teach at the local university is still held...at least so far, tomorrow. But I am currently paying attention to the warnings about transmission---avoiding people, avoiding crowds, staying out of the way.

And it looks like my plans for spring are pretty much out the window. I was planning to spend about a month in France doing wine speaking gigs in Southern France: the Rhone, Bordeaux, Provence, etc. Looks like those will all be cancelled, or at least postponed until...who knows when. I won't miss the gigs that much, but we had worked it so that our daughter could join us for a week---she lives in Geneva. that's probably not an option. sigh. Nice kid, too. It would have been lovely to see her.

I may have to backpacking to avoid people.
Check our our website: http://www.backpackthesierra.com/
Or just read a good mystery novel set in the Sierra; https://www.amazon.com/Danger-Falling-R ... 0984884963
Top

me at home right now 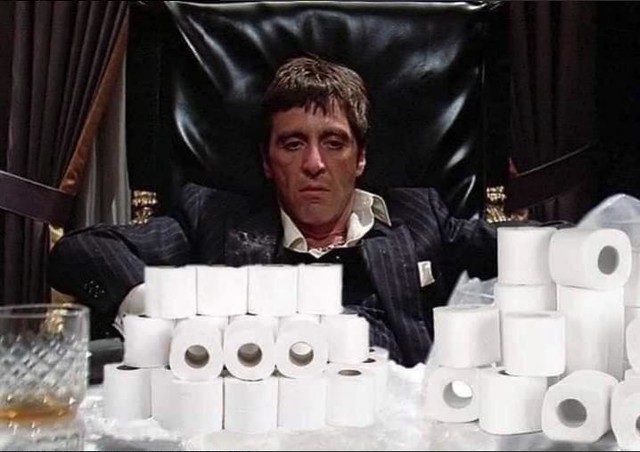 49653924737_d52003be28_o.jpg
You must be registered and logged in to view the files/photos attached to this post.
Short cuts make long delays. JRR Tolkien

If you set out on a journey, pray the road is long. Zbigniew Herbert
Top

Seems like driving to a trailhead, hiking solo, off-trail, meeting nobody, is a good way to avoid the virus. On the drive, stay in your car, bring food, pee in the woods! I am still set on doing a lot of backpacks this summer. Gas is supposed to be quite cheap. But a lot can happen between now and summer. Hard to believe that I fall in the "elderly" category! Staying isolated is not a huge problem for me, being retired. I almost wish I could catch the mild form of the virus and then be immune and not have to worry about it.
Top

It's not all bad news. We drove from Lake Tahoe/Alpine Meadows to the south bay area during evening rush hour tonight and it only took 3 1/2 hours with no traffic!

Like others I'm thinking backpacking could soon be the only thing to do other than sit home. After this next period of rainy weather it might be time to head to Henry Coe for some wildflowers and solitude.
Top

My wife and I were scheduled to go to Israel on the 15th. Our travel agent has postponed the trip and offered new dates with no additional cost. Local universities have extended spring break and gone to online classes. Secondary schools are operating normally for now. TP seems to be in good supply but hand sanitizer is practically gone. I follow a couple of PCT forums and the international hikers are concerned about whether or not they'll get to hike this year. I feel really bad for them since they have made plans to be away for 6 months and now can't even get here.
Top

Live in Fresno, work at a high school in Madera. So far, my school district has cancelled or postponed all athletic programs, field trips, drama performances and the prom until at least April 13. Students at all grades levels, k-12, are not even being allowed to eat in the cafeteria: social distancing. Rumors of school closure for two weeks are going around but nothing definite has been said as of yet. Been told to watch our emails over the weekend for updates. All this from a district in a county that has one confirmed and 7 being monitored

Stores like Costco, Target and Walmart are getting hit hard in Fresno. TP, water, cleaning supplies and hand sanitizer are gone in the big box stores but some supplies can be found at smaller stores. We are good on tp and food (can always dig into our backpacking supply). Just worry about my parents and in-laws who are in their 70's.
Top
Locked
511 posts

Return to “The Campfire”

Users browsing this forum: No registered users and 4 guests